BACK TO ALL NEWS
Currently reading: Mazda 3 to cost from £16,695
UP NEXT
Nearly new buying guide: Volvo V60

The new Mazda 3 will cost from £16,695 when it goes on sale this autumn. The prices were announced at today's Frankfurt motor show.

The range starts with a 100bhp 1.5-litre SkyActiv-G petrol SE hatchback - while at the other end of the scale, prices rise to £23,345 for the 148bhp 2.2-litre diesel Sport Nav Auto hatchback. Three trim levels are available: SE, SE-L and Sport Nav.

The Mazda 3 brings the Japanese manufacturer’s frugal SkyActiv technology to the family hatchback segment, as well as a raft of new technologies and in-car connectivity systems.

The Volkswagen Golf-rivalling Mazda 3, which incorporates the ‘Kodo – Soul of Motion’ design language previously seen on the Mazda 6 and CX-5 production cars, is regarded as a key milestone in the company’s ‘Sustainable Zoom-Zoom’ long-term product strategy.

With C-segment cars accounting for a quarter of the European passenger car market – a total of about three million vehicles per year – the Mazda 3 is regarded as a particularly significant vehicle for the Japanese manufacturer.

The new Mazda 3 is 4465mm long, 1795mm wide and 1450mm high, making it 5mm longer, 40mm wider and 20mm taller than the outgoing version. The new model’s wheelbase is 2700mm, an increase of 60mm. Mazda’s designers say the wide stance, long wheelbase and reduced overhangs have enabled them to build a more spacious, comfortable cabin.

The boot’s capacity is slightly improved too, at 350 litres with the rear seats in place compared to the old car’s 340 litres.

The Mazda 3 will initially be offered with a choice of three high-compression SkyActiv petrol variants and one diesel. The brand new 1.5-litre petrol produces 99bhp at 6000rpm and 111bhp at 4000rpm. Equipped with a six-speed manual gearbox, it can accelerate from 0-62mph in 10.8sec on its way to a top speed of 113mph.

Mazda hasn’t revealed economy figures for any of the engines in the range, but these new powerplants are claimed to be the most frugal on offer in the class.

The best-performing petrol variant in the range has the same amount of torque as the lower-powered version, but can call upon 162bhp at 6000rpm to cover the 0-62mph sprint in 8.2sec and hit a maximum speed of 130mph.

In addition to the six-speed manual, derived from the gearbox installed in the Mazda MX-5, customers will be able to choose a six-speed automatic on the diesel and lower-powered 2.0-litre petrol.

Mazda’s stop-start system, named i-stop, is standard across the range, while the i-Eloop brake-energy regeneration system is also available on certain variants.

The SkyActiv-G petrol motors boast a 14:1 compression ratio, the highest in a mass-production family car, and a raft of efficiency-driven technologies, including special piston cavities and a fuel-saving 4-2-1 exhaust system.

Mazda also claims the new Mazda 3 will have one of the quietest cabins in its class. Lightweight sound-absorbing materials are used to block noise paths into the cabin, while stiffer powertrains, softer dampers and improved exhaust systems also help to reduce noise in the cabin.

The all-new interior splits the cabin into two zones demarcated by the centre console: a driver-focused cockpit and a more comfort-orientated passenger environment. 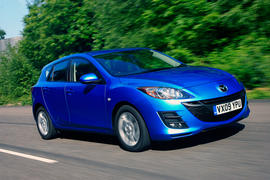 The driver gets a head-up display, a steering wheel that’s mounted lower and a wider range of seat adjustment possibilities. The A-pillars have been shifted 100mm further back to improve the driver’s overall field of vision.

The interior is bigger than before, with Mazda claiming best-in-class shoulder room and redesigned seats with stiffer vibration-suppressing seatbacks.

The new infotainment system features a 7in touchscreen display located above the centre stack, and a redeveloped rotary control on the centre console to operate the functions.

Mazda’s new connectivity concept – a world first on the Mazda 3 – links with the driver’s smartphone to offer a large collection of free mobile content on the move, including a variety of personalised location-based services, radio stations, podcasts and apps.

The Mazda 3 is about 60kg lighter than its predecessor, with weight savings made throughout the car’s chassis, powertrain and body.

The SkyActiv chassis is smaller and lighter and the bodyshell is lighter than that of the current Mazda 3. This is achieved through more use of high-tensile steels, although Mazda says body rigidity has increased by about 30 per cent.

The suspension components are lighter but the geometry and dampers have been enhanced to improve the ride without compromising the handling. The power-assisted steering, gear ratios and brakes have been all been reworked.

Aerodynamic devices such as an active air shutter, which closes the lower front grille when the engine does not require air cooling, and underbody streamlining enhance the new Mazda 3’s drag coefficient, which is 0.275.

They've obviously nothing new to offer like small capacity turbo engines like everyone else so they've decided to come up with a flash title for old tech.

Good job Mazda. I have no doubt that it will sell well.