BACK TO ALL NEWS
Currently reading: Y the obsession? The most prolific BMW Mini collectors
UP NEXT
Exclusive: Morgan bosses detail ambitious growth plans

Y the obsession? The most prolific BMW Mini collectors

It’s like a holding area for Minis: there are three neat rows of 20, most looking ready for action. And had you not driven up the driveway of a private house to get to them, you would have assumed that they were gathered at the Mini factory in Oxford – in a dealer storage area or perhaps lined up for a press launch. Except that most are 20 years old, they indeed live on the premises of a house and they all belong to one man.

Tim Williams is a car enthusiast, and he explains that when he sold his storage business a few years back, he was looking for a strand of the old car hobby to get into. Then, about four years ago, he came across an embryonic enthusiasm for Y-reg Minis. Eh? The Mini Y-Register is possibly the only car club whose focus revolves around one character of the UK numberplate of a very specific model range.

We’re talking about the very first of the BMW-era Minis. By definition, these are relatively few, the club identifying these (for reasons that we will come to) as the first 700 or so made. By a quirk of timing, these cars will have a registration number beginning with the letter Y. But relatively few R50 Minis, as BMW codenamed them, were registered with such a plate. So, er, why?

Because when the new Mini went on sale on 7 July 2001, there were only 11 weeks to go before the next numberplate age identifier came into play. And it wasn’t Z but 51, as the UK switched to a twice-yearly identifier in an effort to deal with the absurd numbers of new cars being registered on 1 August. 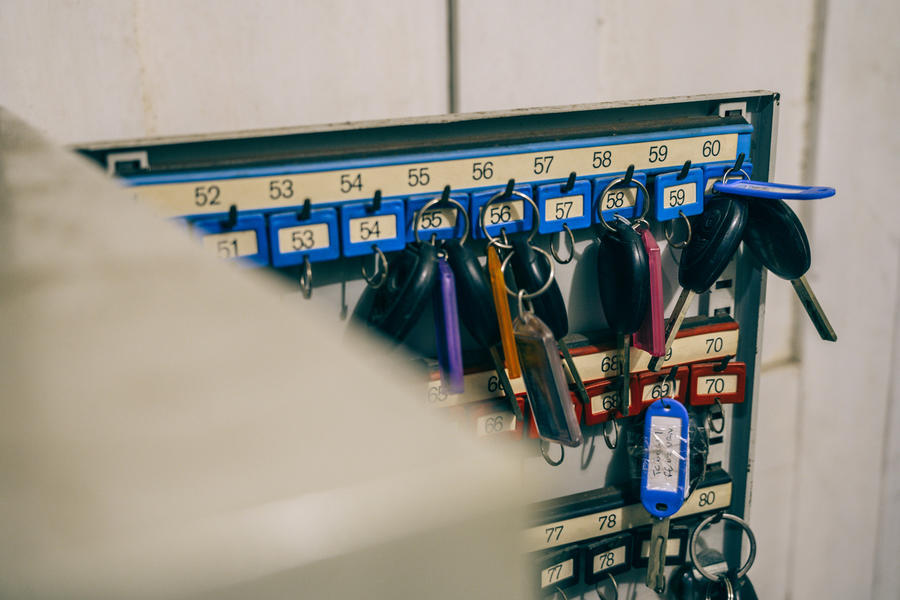 Plenty of new Mini buyers thus delayed delivery of their cars until 1 September, enabling their shiny new Mini to have the shiniest new plate. It meant that many Y-reg Minis were registered by Mini itself, mainly as press cars, and many more were registered by the dealer network as demonstrators. As this was the kind of car bought by individuals rather than fleets, most excited customers were able to wait; businesses with a new product to launch couldn’t.

If you think this is arcane, well, there’s more. Just as the early 1959- 1960 BMC Minis had detail features that were swiftly redesigned, so do the earliest R50 Minis. It’s a rather pleasing symmetry for enthusiasts and collectors, although probably not something BMW was aiming for.

Among the rethinks on the BMC Mini were the addition of drainage holes to the roof gutters(!), oval rather than rectangular cut-outs in the hubcaps, an extra locating peg for the chrome sliding window latches and a reversal in the way the toeboard overlapped the floor, which finally staunched the initially baffling water leaks into the cabin. Perversely, these and more add to a 1959-1960 Mini’s market value.

Among the very early BMW Minis, a handful have an indented rib running the length of the front seats’ backrests and cushions, a few more have clutch and brake pedal rubbers embossed with ‘Mini’ and larger numbers have heater air intake grilles whose grid pattern features larger octagons. The washer jets were redesigned, too. And a few tens of cars did without sound-deadening for the roof (which can’t be seen, obviously), although many more had a seat-recline handle and mechanism that was changed for a new version under warranty if it failed – which plenty did. So there’s more to hunt down than a Y-registration and the low VIN that comes with it. 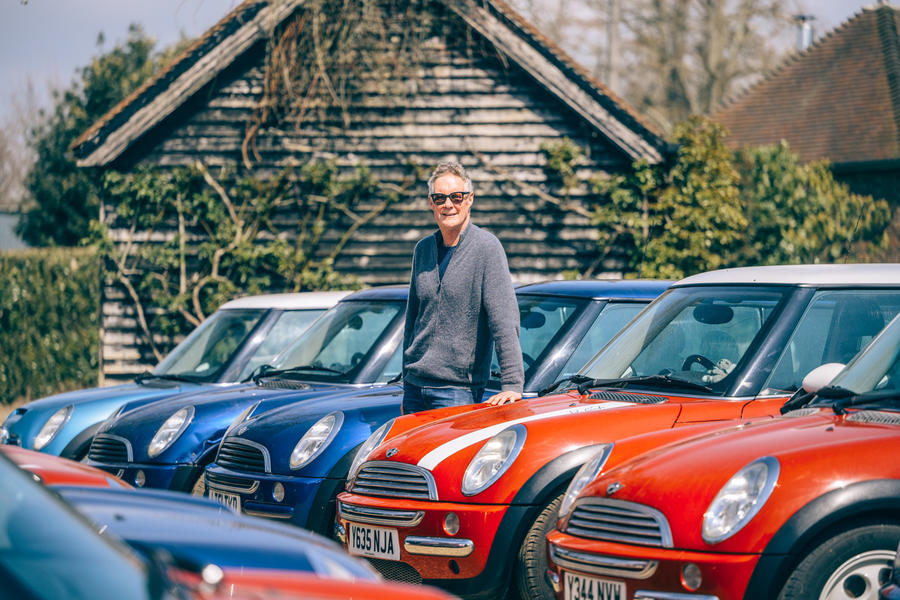 There’s no shortage of hunters, either. Williams points out that of the estimated 700- odd Y-reg cars sold, 400 or so survive, yet the club’s Facebook page has more than 1000 members. More than there are cars to go around, demand therefore exceeding supply. Which is why the prices of these cars are rising (relatively) and why there’s now an almost frenzied clamour to buy the most sought-after varieties should they appear for sale. Especially if they’re cheap, the seller perhaps unaware of the car’s significance.

The rush to buy is now so strong that “it was January 2020 that I last bought one, after a bit of a fight”, says Williams. It was a trade-in, he explains, but having agreed a price over the phone, the dealer told him the following day that he had been offered more, so demanded extra, despite their verbal deal. Williams paid to secure it, but the incident left a bad taste. He has talked to another dealer selling a Y-reg Mini in which there “was more interest than I’ve seen in 30 years of trading”.

When Williams began collecting these cars, there was little or no premium. “Most were end-of-life trade-ins, so I took a trailer,” he says. They were bought for a few hundred pounds, and most came from dealers. “My entire collection has cost me about the price of the cheapest new car on sale,” he adds, surveying his Mini-shaped cache with mild amusement. This is the amusement of an enthusiast well aware of the absurdity of an overpopulated fleet whose acquisition has nevertheless produced considerable enjoyment. Williams’ wife seems happy with his indulgence too, her daily driver a 103,000- mile Y-reg Mini One. None of his cars are in perfect nick, but he’s working on that. “You find very little rust on them,” he says, “which is testament to BMW’s build quality. So is the fact that so many of the 700 survive.”

Part of the enjoyment stems from digging ever deeper into the history of these cars, as there are various subsets of Y-reg cars. A key moment came on 25 April 2001: the last day of official pre-production, when 49 cars of a 211 total were completed.

The following day was the first of regular production, when 12 cars emerged, BMW’s computer records yielding plenty of information for the keen spotter. As ever during the start of new-model manufacturing, some cars took much longer to make than others, which is why “the VINs are all over the place”, says Williams. “Some cars were two or three weeks in build, others were quick.” That’s why some cars with lower VINs than those produced on 25 April appeared on 26 April. On the impressively encyclopaedic miniyregister.co.uk, there’s a chart detailing the build date of every early Cooper and One. 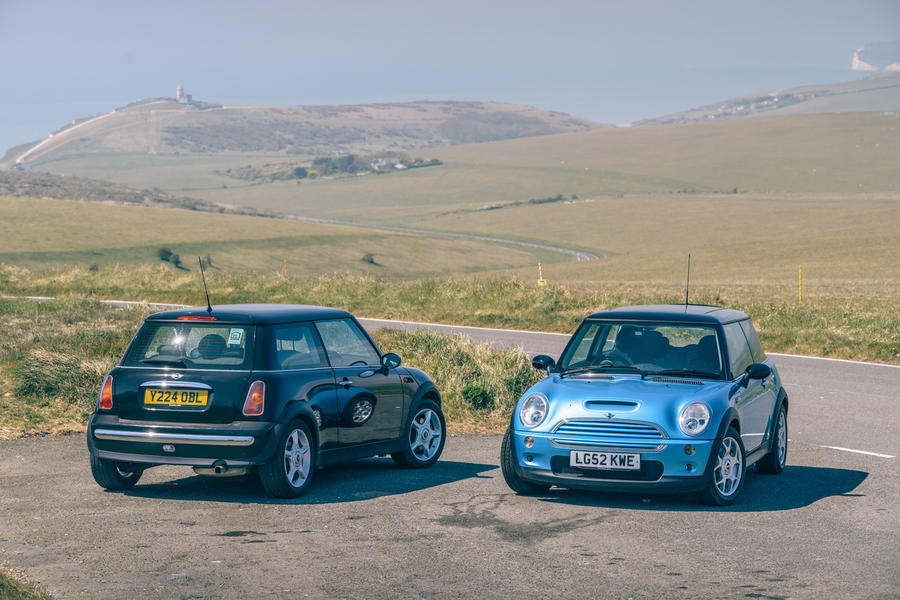 Another category, and the best known, is Minis whose registration numbers end with OBL. These are especially prized, because they were registered by BMW’s press office as launch cars, many appearing on TV, online and in print. Of these, there were 135, and you can see how many have resurfaced so far on the Y-reg club’s website. The earliest known survivor is VIN 69, a blue Mini One. Red Coopers with white roofs are the most sought after. If it’s the low VIN number rather than a Y-registration that appeals to you, it’s well worth fishing among the 51-plate cars, as plenty of very early cars were held over for that new plate.

So what does Williams plan to do with his 20 Minis? “I had no idea I would end up buying this many with early chassis numbers. I’ve got to try to end up with the best,” he says, with less than convincing resolve. His garage can hold nine and a friend will store more. “I’ve sold some with high chassis numbers,” he notes.

But most important for Williams is the interest this “very entertaining” crevice of car obsession has provided. So what next? He isn’t sure, although he does mention the rarity of the very earliest L322 Range Rovers from 2001 with Rosewood interior trim. “It’s very hard to find one of those in decent condition,” he says… 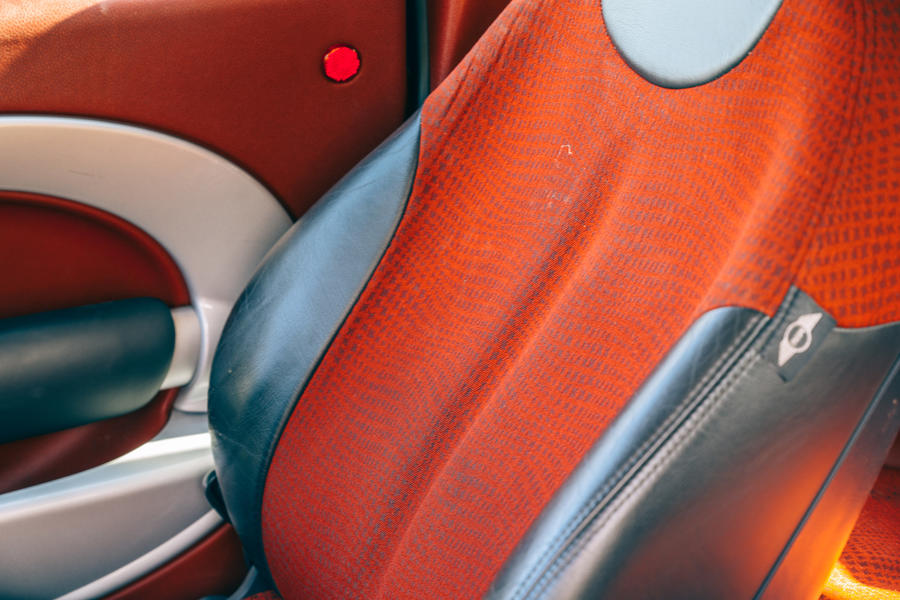 Williams says that at one time, he would have recommended doing all the usual used car checks, “but you can’t be fussy now”. He does, however, recommend avoiding cars already owned by enthusiasts, who might have replaced lots of parts. “It’s better to buy an end-of-life car and retain as much of its originality as possible,” he says.

Don’t expect pristine examples, either. “You’ve got to be realistic,” he says. “These are 20-year-old cars, and their next trip is usually to the scrapyard.” Of those being sold as running cars, “it’s amazing what condition people will sell a car in”. He reckons that, unusually for their age, the cars are reliable if well maintained and that “BMW are very good for most parts”.

The Y-reg Minis most in demand are those with very low chassis numbers, either in the double digits or low one-hundreds; those with OBL plates; Coopers in red with a white roof; and sub-100,000- milers. These are the ones that people battle for, but if you simply want one of the 700-odd Minis with a Y-registration, they do crop up. Three are on sale as this is written.

Mini One: This base model, VIN TB00133, has done 103,000 miles, is in regular use and barely seems any slower than a Cooper, pulling with pleasing vigour. Its dampers feel tired but nothing else does.

Mini Cooper S: Not a Y-reg, but it’s one of the first Cooper S cars and remarkable for having covered only 32,000 miles. There’s a following for the earliest S and the Cabrio. This one drives very well, as you would expect.

Mini Cooper: Rescued from a scrapyard, this sorry-looking Cooper is set to be rehabilitated by Williams. Its chassis number is TC00094, making it the earliest Cooper that he owns, and features the super-rare grooved seats.

Mini Cooper: Bremner brought his own Y-reg Mini in case there weren’t enough for the shoot. It’s number 155, produced on 2 May 2001 – the seventh day of full production.

Mini confirms successor to convertible in 2025