BACK TO ALL NEWS
Currently reading: Why radical Peugeot 9X8 is a game-changing race car
UP NEXT
New Volkswagen CEO Schafer to make brand "loved" again

Why radical Peugeot 9X8 is a game-changing race car

These words come from Olivier Jansonnie, World Endurance Championship technical director for Peugeot Sport, as he leans against the pit wall at Magny-Cours. The new Peugeot 9X8 barrels past in a hollow, bassy, V6 cacophony every minute or so, a misty rooster tail in its wake as the team racks up some wet testing miles to add to the circa 25,000km (15,535 miles) of testing that it’s aiming for.

Jansonnie’s point strikes home. The focus on Peugeot’s resurgence into global motorsport has been on the swoopy, wingless 9X8 that will slide into the WEC later this year, under the new Le Mans Hypercar (LMH) regulations that replaced the Le Mans Prototype (LMP) set last year.

The Hypercar class was designed specifically to encourage manufacturer participation, with costs cut by some 80% over the prodigiously expensive LMP1 class and the machinery designed to more closely relate to road-going performance cars.

With Alpine, Ferrari, Porsche and Toyota also now among those either already racing in the WEC or confirmed as joining for 2023, it’s safe to say that the FIA’s plan has worked. Even Lamborghini will join the bundle from 2024.

Why has Peugeot come back, and why isn’t it at Le Mans this year? 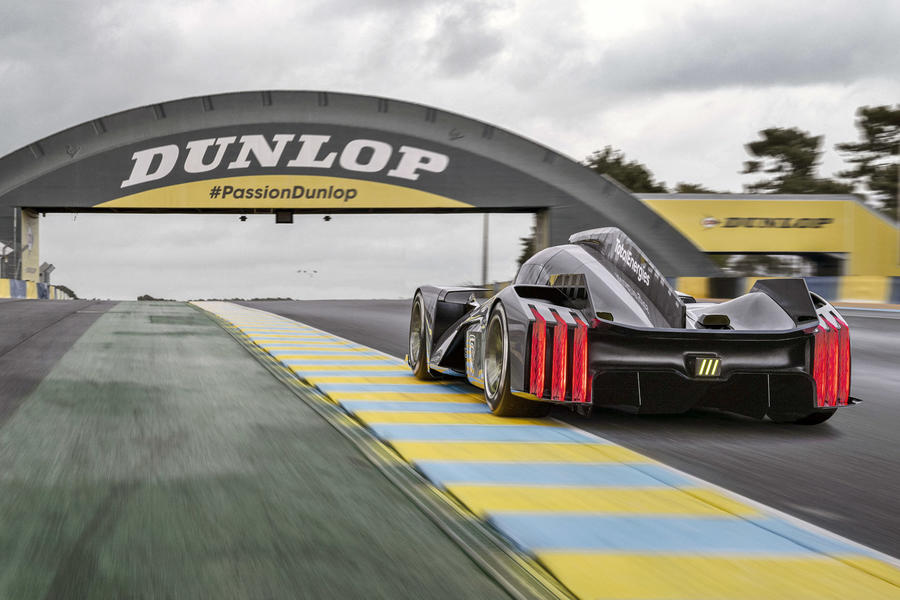 Peugeot is far from a newcomer to top-flight motorsport. Let’s not overlook its successes on the Dakar Rally in 2016, 2017 and 2018, never mind three wins at the hallowed Le Mans 24 Hours, in 1992, 1993 and 2009. There’s also the small matter of five World Rally Championship constructors’ titles and three Pikes Peak victories in the past few decades.

But in more recent years, Peugeot withdrew from top-flight motorsport. So why reverse that decision now? The merger of the PSA Group and Fiat Chrysler Automobiles to create the giant Stellantis organisation certainly played a part. Not only that but also, with the launch of the Peugeot Sport Engineered range, starting with the handsome 508 PSE, Peugeot now has a sporting badge that it’s pitching as a leader in electrified performance.

What better way to promote such a thing than by creating an eye-catching hybrid endurance racer for a globally renowned series that Peugeot has strong heritage in and which hosts its crowning event in France?

Right now, the WEC and its Le Mans round is every Peugeot marketing executive’s dream platform on which to build the newly minted performance badge, especially with the prospect of much lower costs and a more level playing field in the crowning class. A Drive to Survive-style television series about the WEC, coming from 2024, is another sweetener. 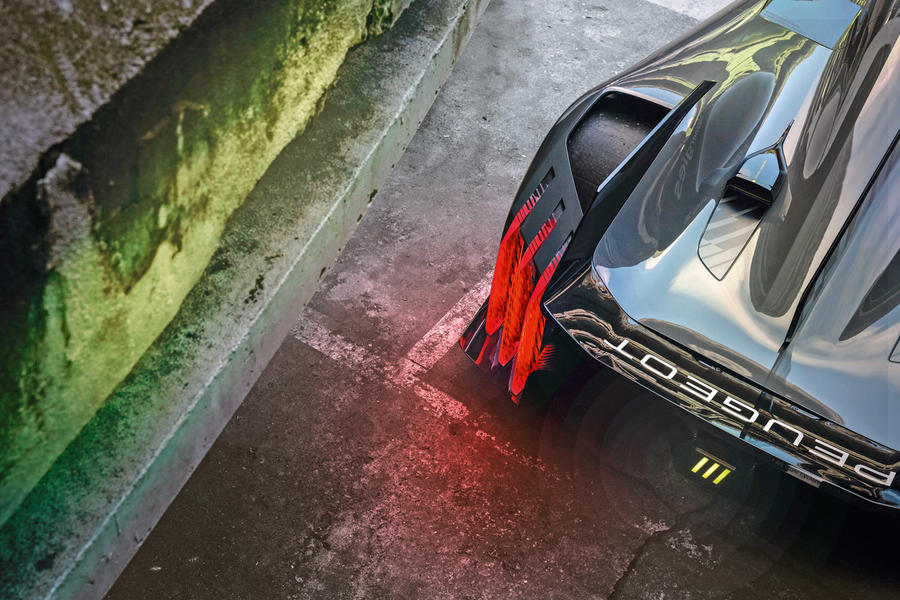 However, as Jansonnie alludes to, while Peugeot itself is an old hand in motorsport, this Peugeot Sport team is as new as the car. It all needs time. More time, it has turned out, than the team had in the run-up to the WEC season’s most celebrated race.

Without the pressure of competing this year, Jansonnie explains that “we can achieve the reliability we need, and our planning will enable us to get all of our resources behind our own test sessions without the disruption of Spa-Francorchamps and Le Mans”.

That may be disappointing for those heading for a bit of endurance spectating this year, but when you consider that Peugeot must race with the final homologated version of the 9X8 until 2025, you can understand why it’s sacrificing this season to get it right and ensure a better chance of success in the next three years. It’s not just on track where you have to play the long game in endurance racing. 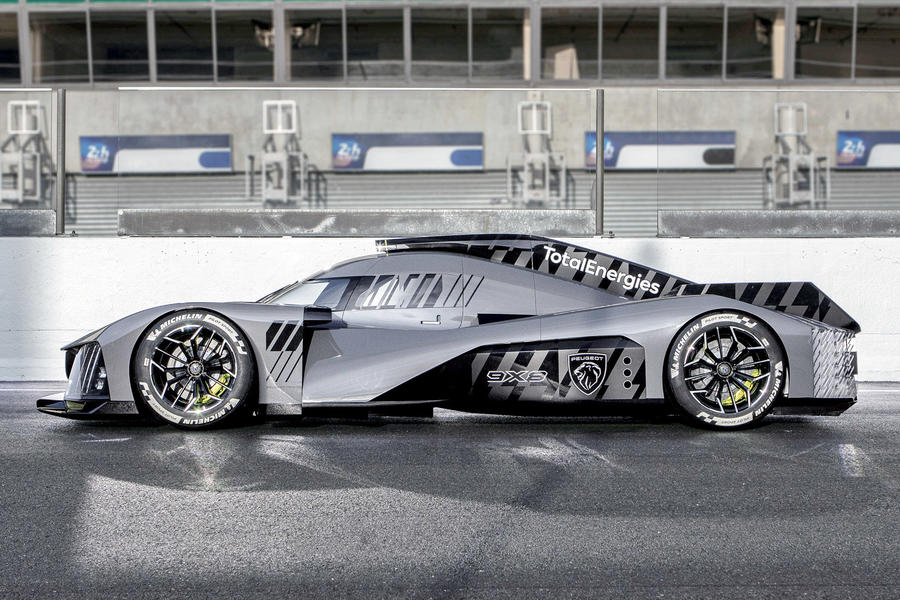 The 9X8 is swoopy, loud and, yes, wingless (more on that below). Its technical details are, of course dictated in large part by the LMH regulations. Manufacturers can use their own chassis, which needn’t be from a road-going car, although that’s allowed if a suitable one is available. Peak combined power output is limited to 670bhp. The cars must send their combustion power to the rear wheels, while an electric motor with up to 268bhp is allowed to drive the front axle for four-wheel drive. This is the set-up that Peugeot has chosen for the 9X8.

However, that four-wheel drive isn’t allowed to function below 75mph – one way of levelling the playing field between the LMH cars and the Le Mans Daytona Hybrid (LMDh) cars, which work to the same performance and Balance of Performance regulations (and also aim for a lap time of roughly 3min 30sec around Le Mans) but are rear-wheel drive only and must use one of four pre-approved chassis.

The 9X8 uses a twin-turbocharged 2.6-litre 90deg V6 that can provide that magic 670bhp all on its own, but the engine is then neutered as soon as the 268bhp electric motor on the front axle kicks in to ensure that the 9X8 never goes over the regulatory maximum power output.

Size and weight are also strictly regulated to ensure a competitive field, as is much more.

How will road-going Peugeots benefit from the 9X8? 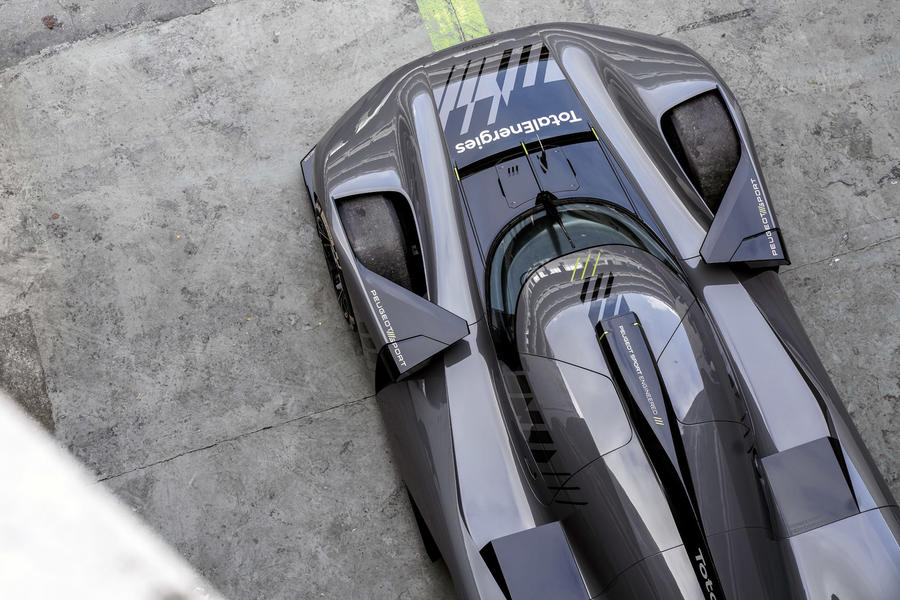 You don’t need us to tell you that motorsport has always been one of the best Petri dishes for the development of automotive safety, performance, efficiency and more. That hasn’t changed and, in fact, the new LMH and LMDh regulations mean that the WEC’s fastest racers have a more direct relation to road-going cars than any preceding Le Mans prototype. Even the cockpit of the 9X8 now bears more relation to a road-going car, while the distinctive triple-light ‘claw’ design of Peugeot road cars is a key design feature on the 9X8.

As for potential technology that’s likely to trickle from race to road? Well, for a start, the intriguing aerodynamics on the wingless hypercar could have ramifications for Peugeot and other Stellantis brands. Not only that, but also the 9X8 gets a 900V electrical system that Jean-Marc Finot, senior vice-president of Stellantis Motorsport, confirmed to Autocar “would, either as an 800V or 900V system, make it into a Stellantis road car soon”.

Suffice to say that from its almost unsettlingly wingless backside to an engine that runs on the waste from wine production (if you ever needed an excuse to drink wine, supporting endurance racing and renewable fuels has to be a good one), the 9X8 already feels like a feat of futuristic engineering and unfettered thinking.

The first true test will be Monza this year, when the 9X8 will make its competitive debut. But even before that baptism of its first race – let alone the hyper-thrill of taking on the established might of Toyota alongside the other new contenders from Alpine, Ferrari, Porsche and more at Le Mans 2023 – Peugeot already appears to well and truly have its motorsport mojo back.

The lack of a rear wing is the big talking point about the Peugeot 9X8. The last car to race at Le Mans without one was the Nissan Deltawing concept in 2012, while the last wingless car to win the event was the Porsche 917K way back in 1971.

Peugeot approached the 9X8 by looking at the obligatory four-to-one downforce ratio that the LMH regulations require, and everything to achieve them was up for grabs. Hence no wing but lots of downforce from the floor of the car and an aggressive rear diffuser. Plus, the rules allow the LMH cars one adjustable aerodynamic feature that – although not confirmed by Peugeot Sport – seems very likely to be under the nose or in the floor of the car. This feature can’t be changed on the fly from the cockpit; the regulations state that it has to be changed in the pits.

Peugeot Sport driver Jean-Éric Vergne says: “It’s a big topic for everyone else, but it’s not an issue for us. Downforce is downforce, whether it’s from the floor or from the rear.”

Another of the star-studded squad, Loïc Duval, is clear that “there’s less downforce than in the Prototype cars”. He explains: “Between that and the lower power, I wondered if it might be like a powerful GT car to drive, but in the end, you drive the car like it’s a prototype. Of course, it’s heavier, a bit lazier to change direction [than an LMP1 car], but actually it’s really surprising how well the 9X8 behaves. When you’re driving it, you just don’t know that it doesn’t have a rear wing.” 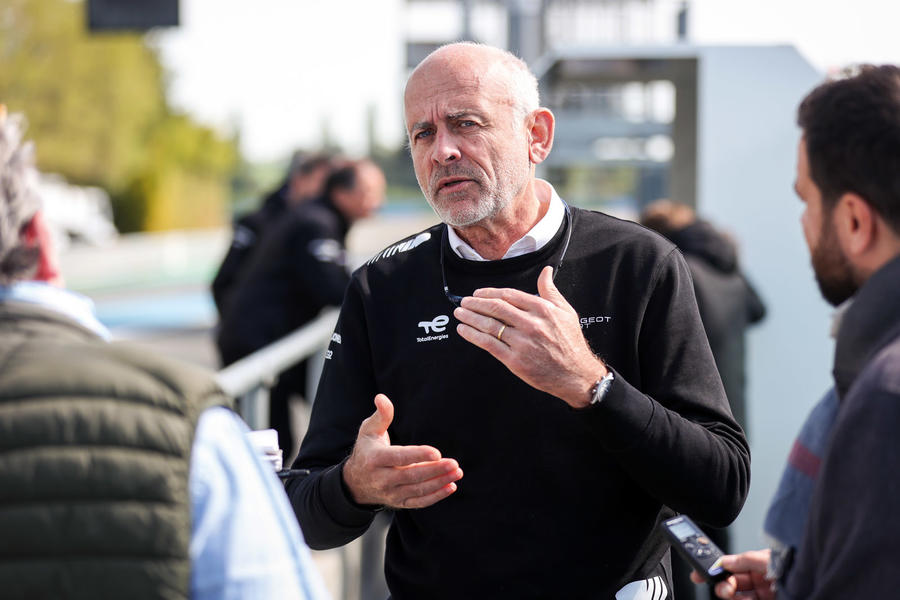 Why did you choose LMH rather than LMDh?

“We went for LMH because in LMDh the only thing developed by the manufacturer is the combustion engine. It’s not very friendly. With LMH, we have all the freedom of technology: the chassis, the powertrain, the battery and the 900V system. We’re working on these topics, and soon they will have an effect on our road-legal cars. One guy now working on the 9X8 even worked on the 308. That’s why it’s important for us that you can see that it’s a Peugeot. We have really applied the spirit of the Hypercar regulations [to the 9X8].”

Is the 9X8 ready for homologation?

“The car is where we want it to be and we’re nearly ready to freeze it. We have some final stuff to do in the wind tunnel and then we will present the car to the FIA for homologation. Hopefully we will be racing at Monza in the summer.”

Will the finalised 9X8 have changed much from the original concept?

“We could have homologated the concept car as it was, but the rear of the car has been modified since the concept was revealed. It’s not a question of downforce, it’s just to aid stability – to make sure that we know the car will be safe in case of suspension failure, if it loses a wheel, has a [tyre] blowout etc.”