BACK TO ALL NEWS
Currently reading: Tesla Model S Shooting Brake: we drive electric estate
UP NEXT
New Audi S3 Sportback and Saloon arrive with 306bhp

They say all great ideas start in a pub. Science has yet to explain why - probably because no one has produced a coherent post-session report - but evidence suggests a top lip dampened by the froth of ale really motivates a creative mind.

For some, these great pub ideas will best lost in the mists of a hangover but, for others, something truly impressive can follow. Take the Tesla Model S Shooting Brake you see on these pages, which was first coined at The Bird in Hand near Hethel in Norfolk.

“Three of us were having a catch-up chat and a pint over lunch when we thought it up,” says Dorian Hindmarsh, managing director of the coachbuilding company Qwest that produced the car. “Phil, who had just bought a Model S P90D, said he had nowhere to carry his dogs, so Jim said why don’t you make it an estate car. Roll on 18 months and there’s one sitting outside.” 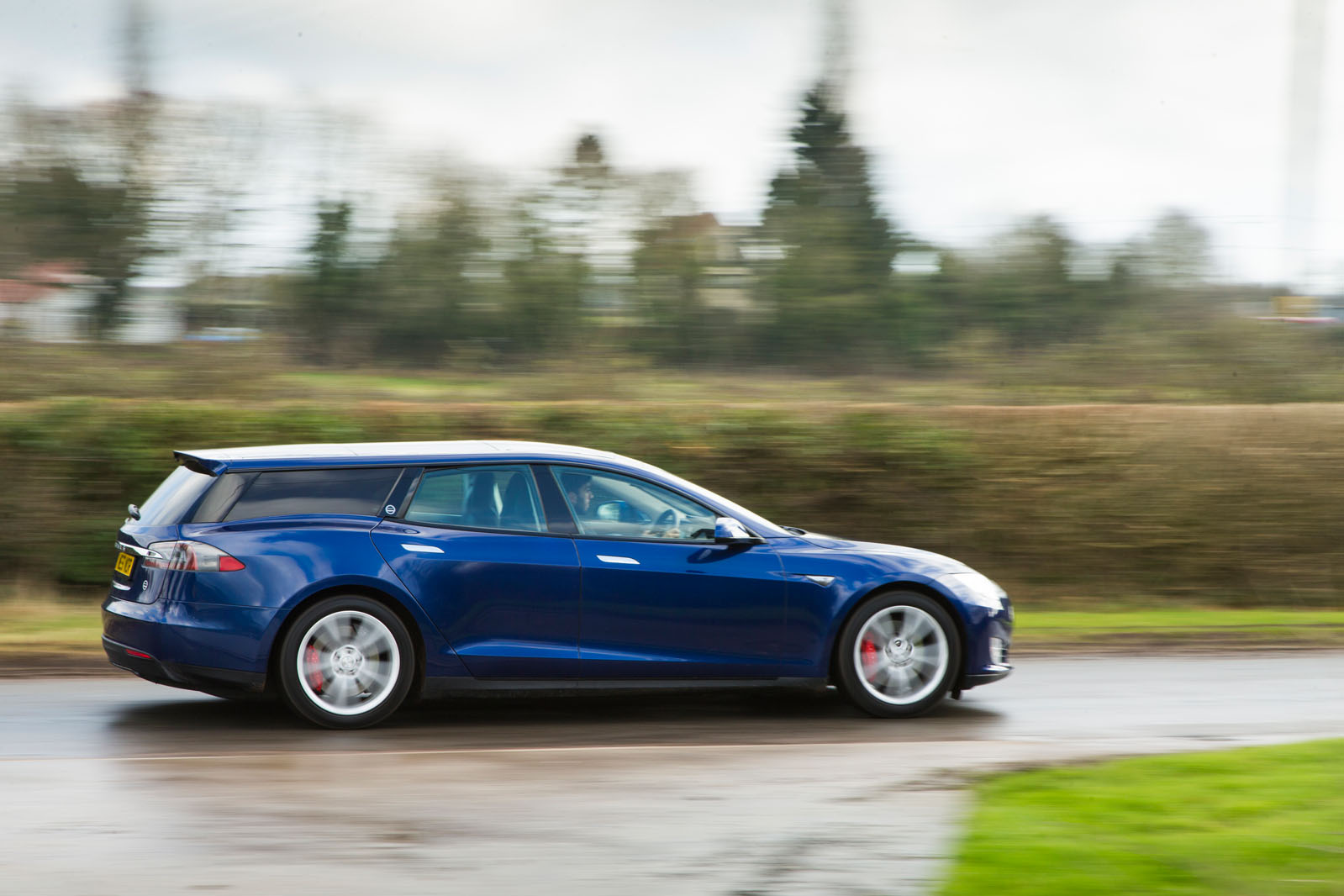 Phil Hayton, director of Qwest and the man who bravely allowed the part-dismantling of his Model S to make the world’s first battery-electric shooting brake, liked the idea of an estate because it would provide more room for Ted, his six-year-old labradoodle. Jim Router, a technical genius with 40 years of experience, joined the venture as engineering director with such confidence that he said it’d be “a doddle” to convert the saloon.

Of course, it was inevitably more complicated than that, as Router explains upon our visit to Qwest’s Dereham base for a look at the finished car. “The challenge was trying to design the changes so they are repeatable,” he says, standing beside the carbonfibre tub of a Jaguar XJR-8 and a 1:8 scale McLaren F1 model, mementos of former projects he has played a key part in. “It’s no good just cutting into it; we had to leave all major structural parts there so the crumple zones are unaffected.” This is where Router’s involvement paid dividends.

Having worked for McLaren, Lotus and TWR (the latter on its Jaguar Le Mans racers, including the winning XJR-9), as well as with Riversimple on its new Rasa hydrogen car, he knew how important these first stages would be to ensure as smooth a progression from design to production as possible. “Other companies sometimes cut into the first car and work it out as they go,” says Hindmarsh, “but we had the car laser scanned so Jim could create a full 3D digital model before any work began.” Three designs were made, one with the tailgate split in the D-pillar, another with a fully split tailgate and the third was the design you see here. 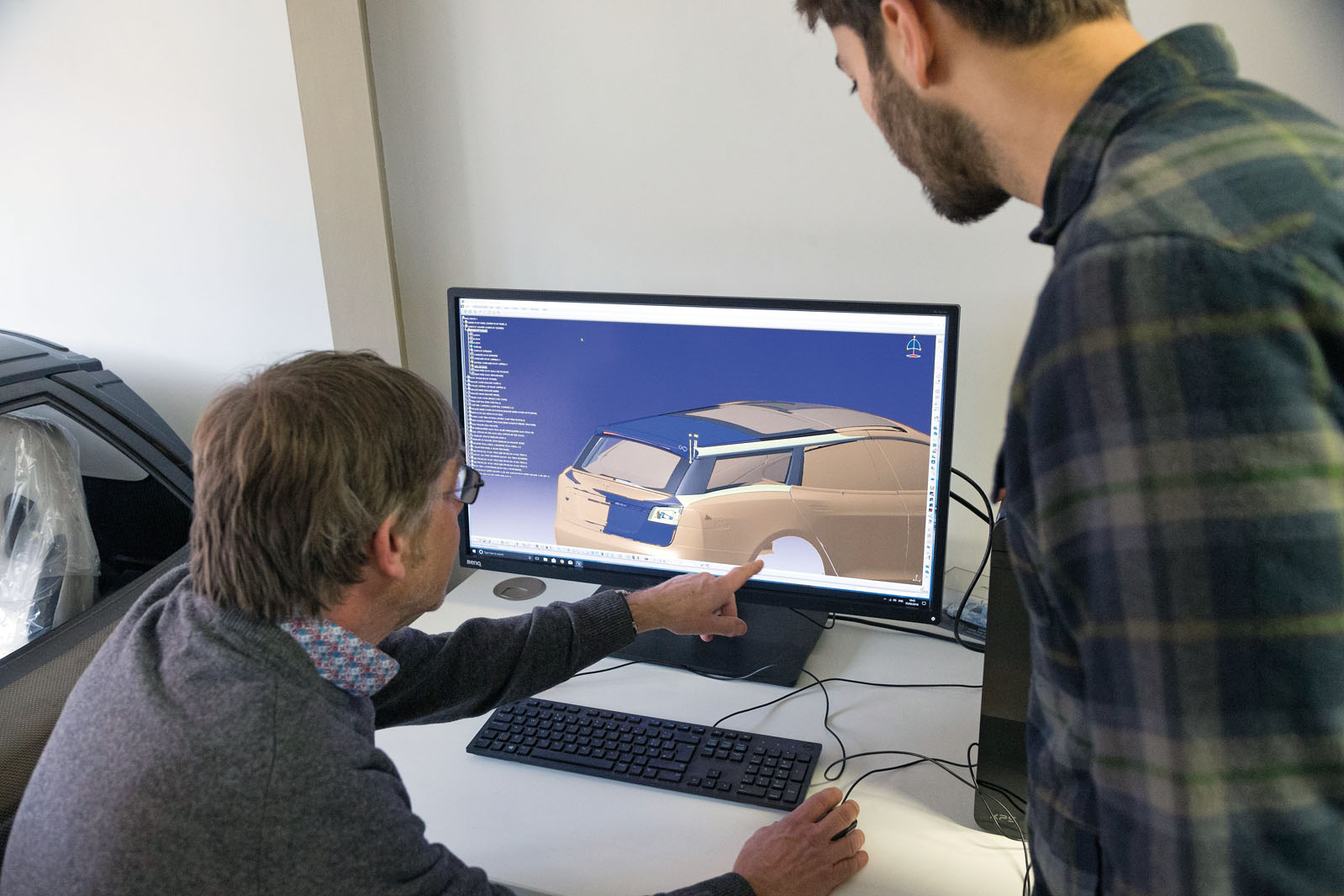 A 1:10 scale model with an interchangeable rear was produced for Hayton to live with for a few weeks to help make his decision. With the final design selected, the team went to Tesla for its approval. Hindmarsh said Elon Musk’s brand was “very supportive” of the idea, so long as no modifications were made to the car’s crash structure and electronics. As such, beneath the elongated rear section remain the original C-pillars, with the new car’s tinted rear glass hiding them from view.

The new bodywork that surrounds them is made entirely from carbonfibre, something all three Qwest founders agree will remain the core material of al future products because of its lightness and strength. In the Model S, it helped the team trim 12kg from the car’s kerb weight despite its expanded surface area.

“We sourced as many of the new materials as we could locally,” says Hindmarsh. “Aside from the Pilkington glass rear screen, which was an off-the-shelf product, pretty much everything we’ve added to the car is bespoke, but we made sure that the new parts can be readily sourced again and they’re all E-marked [with European certification].”

Even the interior fabric, which was sourced from a local Norfolk trimmer, looks and feels identical to the rest of the cabin – an illustration of the lengths the team went to ensure a seamless transition from original to new. Ted certainly approves, as he spends most of his time during our visit comfortably nestled in the warmth of the new car, only hopping out for our test drive. 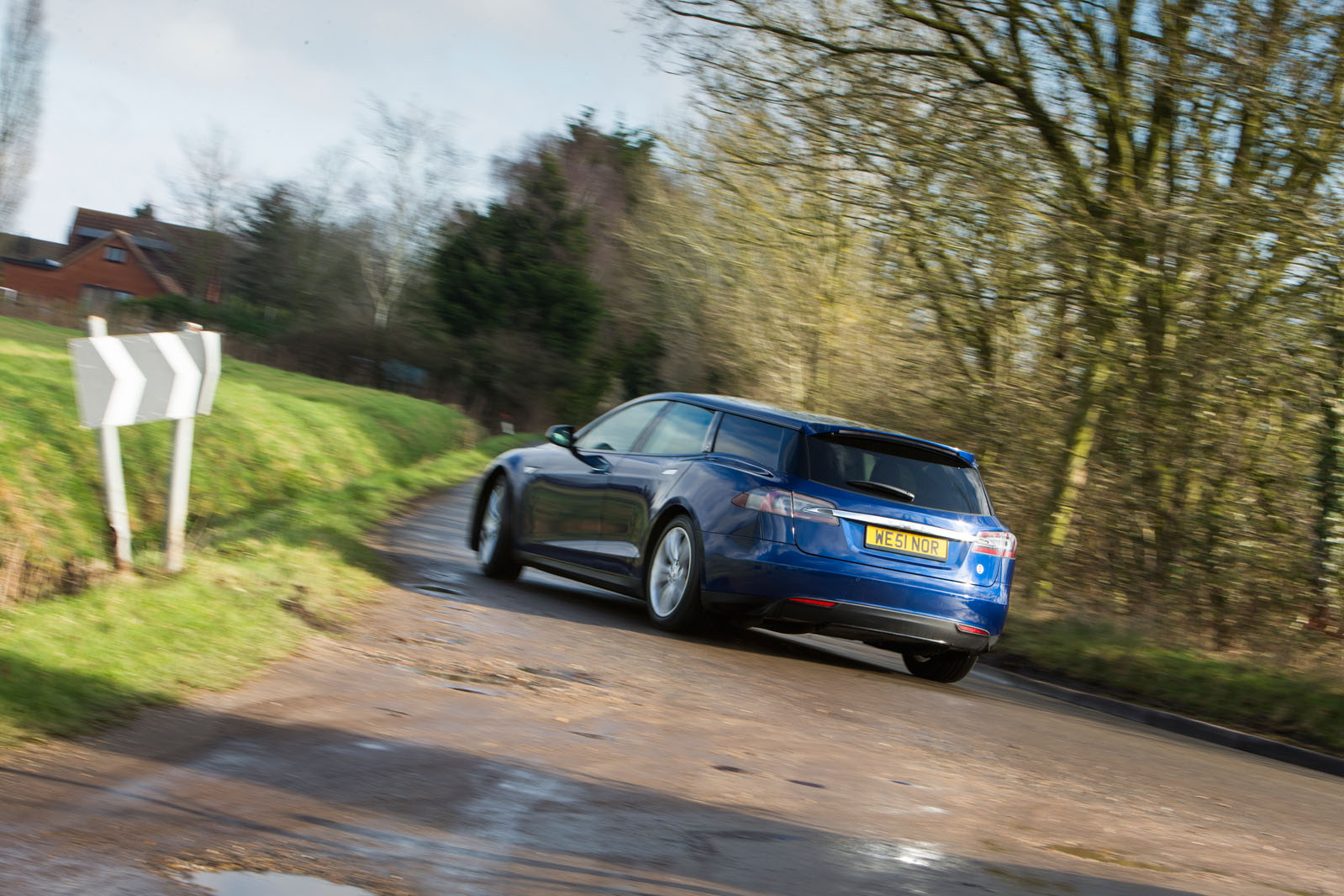 Hindmarsh said the Shooting Brake could now offer up to 7.4ft of uninterrupted luggage space, three inches more rear head room and space for two adults (as opposed to children) in the boot, when Tesla’s optional rearmost seats are fitted. But these improvements have no noticeable impact on the car’s driving experience. There are no new sounds and the car rides and corners exactly as a regular Model S. Its defining trait, that scenery-blurring acceleration, remains unchanged.

There is, of course, one catch: the cost. For customers, the process of converting their car into a shooting brake is expected to cost about £70,000, which is more than the price of a new Model S 75D. But just 30 examples are due to be made so that money does buy a level of exclusivity, as well as practicality, that few cars can match.

With a public debut at the London motor show around the corner and a list of interested clients already growing in number, the Qwest team is certainly optimistic. “This is a car for people who want to be different, for people who want to be part of future,” says Hindmarsh. “I can imagine our car looking as at home in Knightsbridge as it does on the country roads of Norfolk.” 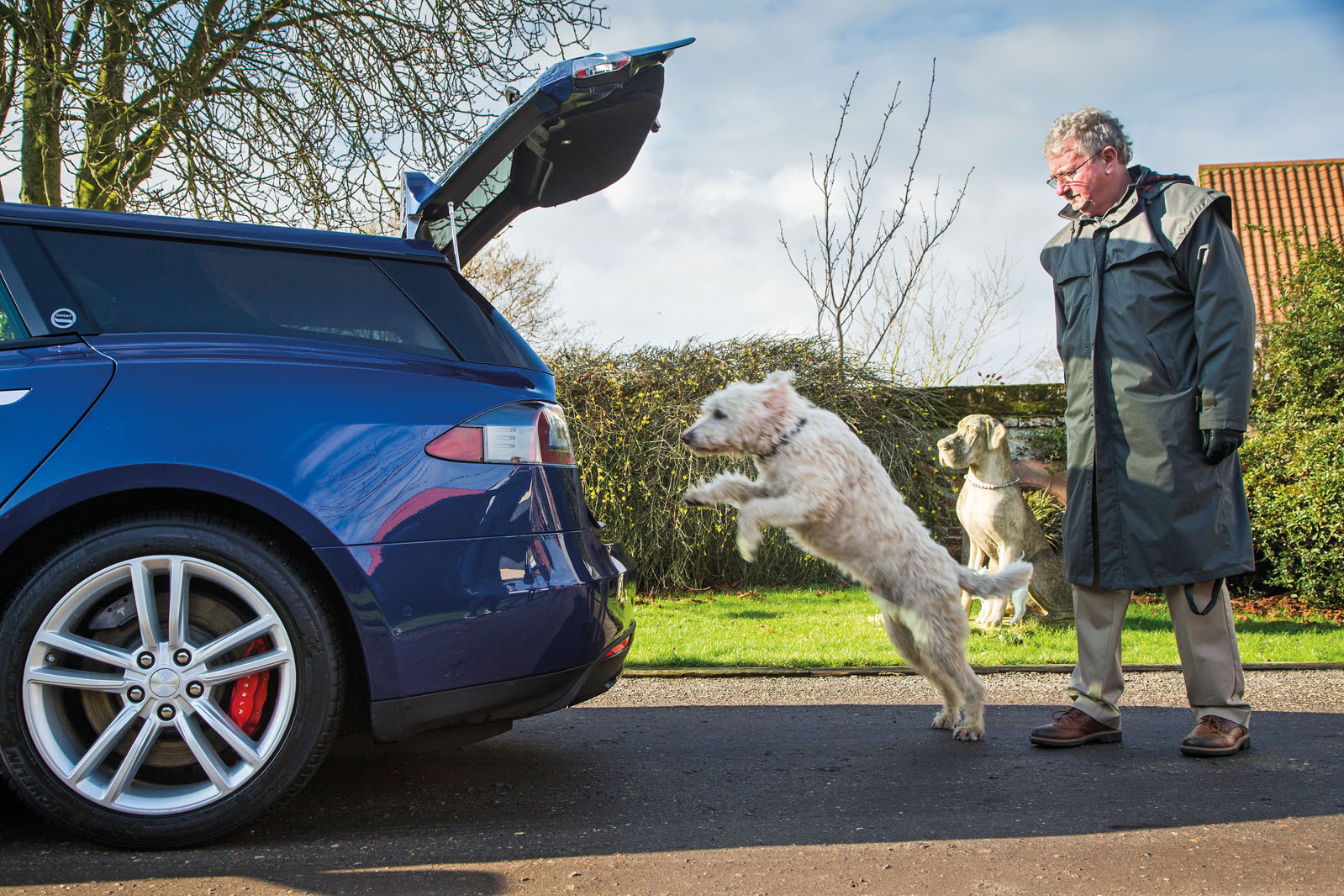 MASERATI QUATTROPORTE CINQUEPORTE - A Maserati Quattroporte was converted into an estate for a wealthy Middle Eastern customer by specialist Italian coachbuilder StudioM. The costly process included extending the roofline and even repositioning the fuel tank to maximise boot space. Just one example was produced.

I think so, not anymore compromised than some others, maybe in a lighter color it wouldn’t look so heavy, the planned thirty will sell...

I think so, not anymore compromised than some others, maybe in a lighter color it wouldn’t look so heavy, the planned thirty will sell...

It's incongruous to be frank. Ares Design have a much better looking alternative in the works, to excuse the pun, and it doesn't look like a 'works' car. Hats off to Dany Bahar.

Ares have only shown a CGI

Ares have only shown a CGI image thus far, so hardly fair to compare.

Well done to them for doing this. It doesn’t completely hide the fact it’s an adaption, but no shame in that. Looks a little like a Ferrari GT4 Lusso from some angles, not sure if that’s a complement!

I saw a Lynx Eventer last week, first time I’ve ever seen one. That conversion was much better integrated, but helped by starting with a boxier styled car to start with.

Ares have only shown a CGI image thus far, so hardly fair to compare.

Well done to them for doing this. It doesn’t completely hide the fact it’s an adaption, but no shame in that. Looks a little like a Ferrari GT4 Lusso from some angles, not sure if that’s a complement!

I saw a Lynx Eventer last week, first time I’ve ever seen one. That conversion was much better integrated, but helped by starting with a boxier styled car to start with.

If what they've done with the new 'Pantera' Hurucan, I have every confidence in them.

Perhaps the idea was dreamt up in the pub, but you'd have to be absolutely paralytic to buy one.

If I wanted space for our four legged friend and had to have a Tesla, I'd buy a Model X

Perhaps the idea was dreamt up in the pub, but you'd have to be absolutely paralytic to buy one.

If I wanted space for our four legged friend and had to have a Tesla, I'd buy a Model X

Not an estate car I'd look

Not an estate car I'd look twice at. It's a styling exercise (and not a very pretty one at that) that is very low on the one thing that estates should have: accessible volume. That's a shame because there is a shortage of decent, working estates and something from Tesla would be just the ticket.

I saw a similar attempt based on a Corvette. Sleek, low-roof cars need a sloping rear. Can't say that I'm a big fan of Ferrari's FF or what Porsche did to its Panamera too. The sport turismo version of the Panamera looks like it ate an Audi A6 avant. Perhaps the Model S estate can function as a hearse for the ecominded.