BACK TO ALL NEWS
Currently reading: Rover's return: Fixing a written-off Rover 75
UP NEXT
New 2022 Range Rover teased ahead of reveal

When our man contacted his insurer after his faithful Rover was damaged, he was offered £1000 for it. Naturally, he instead spent that on fixing the 75 himself
Share
Open gallery
Close
Share story

It’s not easy to single-handedly manhandle a car bonnet. It’s a big panel, making it difficult for your hands to get a grip, and it’s quite heavy. Manoeuvring said panel onto a trolley – the type used at Ikea to carry big flatpacks – is also a challenge when said trolley is resting on a slight slope, this topographical detail revealed by its insistence on rolling down it.

This probably comedic scene – I could imagine being watched on CCTV – was to be witnessed at a salvage yard near Southampton on a hot day last summer, with your scribbler unable to request assistance for Covid-19 reasons. The undamaged bonnet was being freed from an expired Rover 75 Tourer for my now lightly damaged 75 saloon. Damaged because a car pulled out in front of me from a side road and my attempts to avoid T-boning this sudden steel impediment were only partially successful.

The 75, a 2.5 V6 Connoisseur SE, no less, is a car that I’ve owned for almost five years, after buying it for £800 as a stopgap. So reliable, sumptuous and civilised has it been that I’ve enjoyed 25,000 miles of its 76,000-mile total and plan to keep running it until it’s stopped by an expensive mechanical failure. Which has been staved off so far by regular specialist maintenance and the fact that it’s so well made. 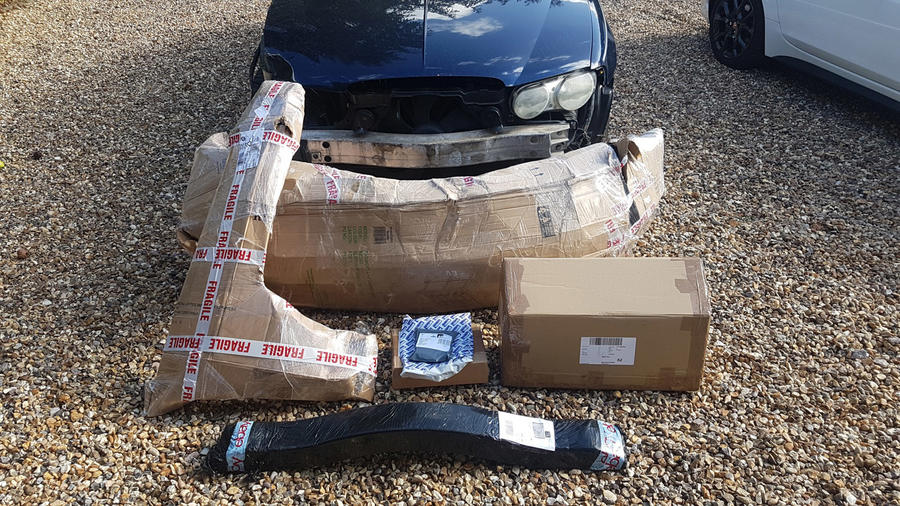 I hadn’t expected the 75 to be stopped by the offside flank of a white Kia Niro, on the other hand. The visible destruction included the offside front wing, a headlight, an indicator, the front bumper and the bonnet. Behind these items, the damage was unknown. The Kia’s offside doors and rear wing were squashed, but no airbags fired in either car. Details were exchanged, insurers contacted and within days I was offered £700 for the Rover, which predictably was doomed to be an economic write-off once I had furnished pictures. That it was able to drive away from the accident feeling exactly as it had beforehand didn’t seem to figure in the insurance assessor’s calculations.

Still, arguing that mine was a top-of-the range example, relatively low mileage and well cared for pushed that to £1000. Could I keep the car, I asked, figuring that I could repair it. I could. I would get £1000 if they took it away or £1000 if I kept it. And I talked them out of recording it as a Category D write-off with non-structural damage, despite its light reshaping.

My plan was to do as much dismantling as I could, find used parts and have a bodyshop paint the replacement panels. Buying cheap second-hand parts for a 75 is easy, because many are being broken for spares right now. The youngest 75 is 15 years old, the oldest 22, this being the period when most examples of a model are swept from the streets and crushed. 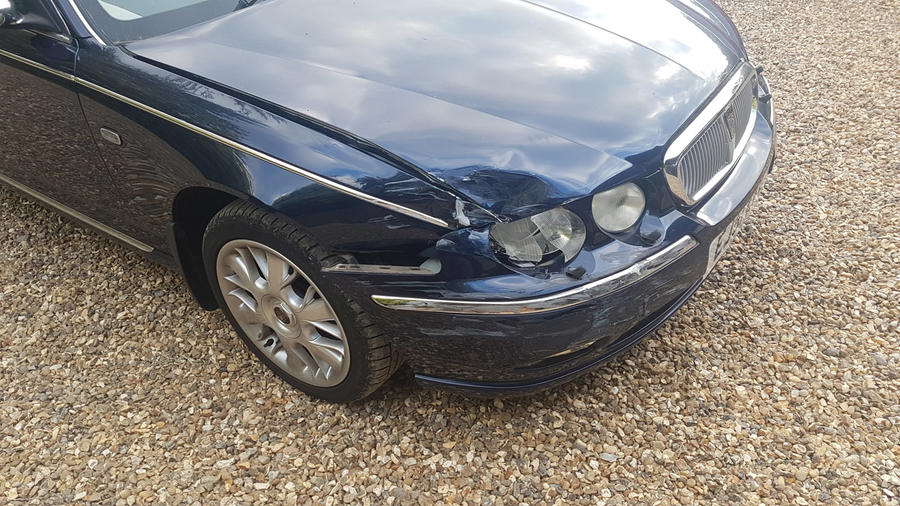 eBay is a great source, as are salvage yards. The cheapest are breakers, who allow you to remove the parts yourself, the aforementioned bonnet costing a mere £30. The front bumper (£90, including indicators and polystyrene energy absorber), wing (£42), headlight (£57), crash bar (£16.50) and slam panel (£28) all came from eBay. The last two items were also damaged, as they’re designed to be in a minor smash. New parts included the bonnet release cables and some fixings, taking the parts total to £363. Painting the gold front bumper, black bonnet and not-quite-theright-blue front wing was way beyond my skills, but an excellent local specialist quoted £650. That included painting the nearside wing, whose lacquer was peeling. He also lined up the fresh panels just so. It looked great.

p the fresh panels just so. It looked great. The next day, I deliberately smashed the 75’s front grille. Why? Because it was the only way of accessing the bonnet latch mechanisms, which hadn’t been adjusted for the new slam panel, preventing the bonnet from opening. That added £25, pushing the total bill to £1013, or £13 more than the compensatory cheque. True, it took me about five days to dismantle the Rover’s damaged nose and search for parts, including an enjoyable day at UPickIt (enjoyable if you like scavenging parts for your cars, a process I find strangely satisfying), and reassembling enough of it that I could legally drive it to the paint shop.

But it was a mostly enjoyable process, I learned more about how a 75 is constructed and, best of all, saved a perfectly usable car from the crusher. Better still, the Rover looks slightly smarter than it did before the accident. Another triumph for Bangernomics, I think.

The man who fights insurance companies

Everything you need to know about car insurance write-offs

Great to see it kept on the road but obviously lost the headlight washers and the wheels are different too.

si73 7 February 2021
Well done, how did you get the bonnet home from the scrappy? It's a huge panel that won't fit in many cars, hire van?
75s are much maligned but I think they're great cars as are their ZT counterparts.
Bob Cat Brian 7 February 2021
great article, it's an attitude that is being lost I think. When I was 18 someone hit my pride and joy, a Nova, while it was parked but thankfully left their details. It needed a new door, which made it a write off as far as the insurers were concerned. I bought it back off the insurers for £50, got a door from the scrapyard, in the same colour, for £25, fitted it myself and used the rest of the payout to go on a 18-30s holiday.