The racing tyres Dunlop supplies to the BTCC come from an unlikely source. We track their journey
Open gallery
Close

What do tree plantations in Thailand and the perimeter of Brands Hatch have in common?

Red-tailed tropical birds? You won’t find many of those fluttering along Clearways. Grandstands? Not sure folk have the patience to watch trees grow. Burger vans? No, the answer is rubber. Lots and lots of natural rubber.

Admittedly the rubber in Thai forests is a liquid that seeps out of ‘wounded’ tree trunks, while at Brands Hatch it’s the primary material in the ‘well worn’ racing tyres that make up crash barriers. But these two rubbers toresexist at the start and finish of the same process: racing tyre production.

Making the rubber that will be used on track requires a different process to ones that end up on our road cars. Take the 18in tyres fitted to the 32 British Touring Car Championship entries, for example. They use material that is grown, sourced and manufactured entirely by hand, a process which is almost the polar opposite to that used by the manufacturers of road-going tyres. Road tyres use much higher levels of man-made silica and are produced via a more automated process. 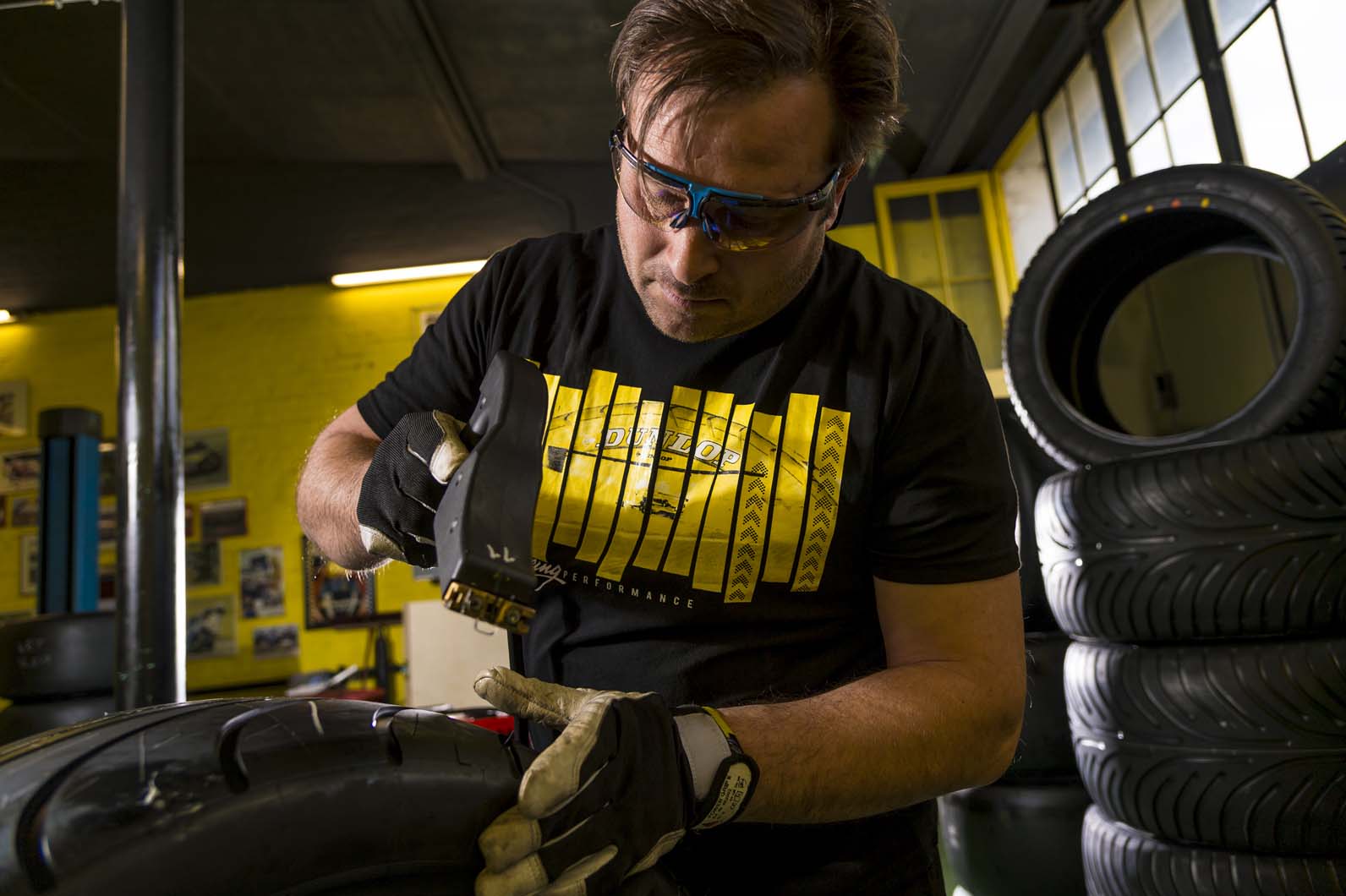 “We use natural rubber in racing tyres because it has a higher stretch ratio, so it’s more resistant to tearing,” says Dunlop race tyre engineer Stefan Nasello. “Silica has benefits in road tyres but in racing we need the strongest material because teams have a habit of pushing things over the limit.”

Nasello works at Dunlop’s main racing tyre production facility, which is located at the tyre firm’s factory in Hanau, Germany, a site that recently celebrated its 125th year of work. These days the factory specialises in high-performance tyre production, making boots for only the fastest of supercars, such as the Porsche 911 GT3 RS, and for Dunlop’s racing activities, which has included supplying the whole BTCC grid with its tyres since 2003.

“We also supply tyres to teams in the LMP2 and GTE classes of the World Endurance Championship, as well as teams in the VLN endurance series in Germany,” says Nasello. “In these cases there’s tight competition against other tyre brands, so we’re always working flat out.”

That’s what makes the tyre production process employed by the 37 operators at the Hanau racing tyre facility so crucial. One tiny mistake in the manufacturing process, one millimetre’s worth of misaligned material, and the results might not reveal themselves until a racing car suffers a mid-race blowout two weeks later. That’s not something Dunlop, or any racing tyre manufacturer for that matter, wants to endure. “Racing tyres are actually made of fewer parts but they have to deal with much, much higher loads, so our operators are highly trained,” explains Nasello as he shows us around the factory “It’s a very detailed job, yet we produce around 150 tyres per day, all by hand.”

There are 18 parts in each racing tyre compared with 22 for a road tyre, because each component is focused on one job: to provide grip. Road tyres, on the other hand, have to work in a much wider variety of conditions, while acting as a component of the car’s suspension and, increasingly in recent times, offering low rolling resistance.

Yet it’s the work of a racing tyre maker – not a road tyre-making machine – that is most impressive. Watching one in action is a bit like observing a bespoke tailor demonstrate their craft. They stand in front of their workstation and slice and fold rubber with the same conviction as a Savile Row sewist. Each can roll sheets of this material, which has been supplied to Dunlop from contracted rubber tree farmers located in Thailand, Malaysia and Indonesia, at such pace that it takes just 15 minutes to create a racing tyre’s internal carcass. This rubber carcass is not visible once fitted to a wheel, but is key to its performance because it ensures the tyre can sustain substantial loads, such as surviving a 20-minute race around an abrasive circuit such as Thruxton at an average lap speed of 115mph. 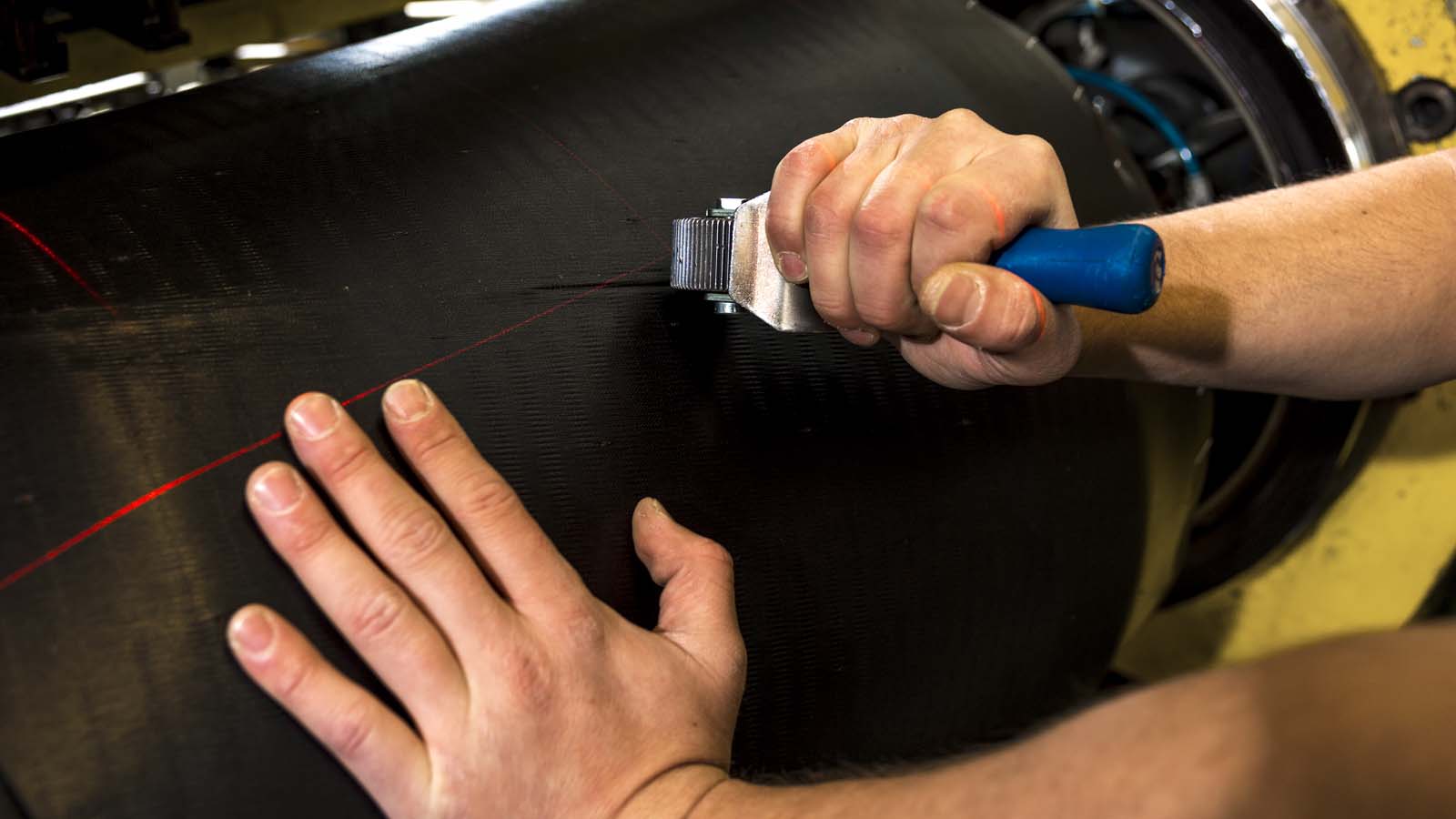 Race tyre makers then add an internal belt, which enhances overall strength further by tightening the layers together. Interestingly, while Le Mans tyres are equipped with belts made from Kevlar – to cope with the higher endurance required from multiple stints during the 24-hour race – BTCC cars use steel belts like road cars, because they have to cover far fewer laps.

This, says Dunlop motorsport centre manager Mario Korn, is what makes the transfer of technology from BTCC to road much closer: “Racing tyres have sidewalls that are about one millimetre thick, whichis thinner than a road tyre’s. That’s purely because they have to cover far fewer miles.”

The final layer to be added to the tyre is the ‘tread’ compound, which varies depending on the specification of each tyre (BTCC competitors use two compunds of Sport Maxx tyre at each race meeting). This is the part that makes contact with track surface, so its importance is clear. 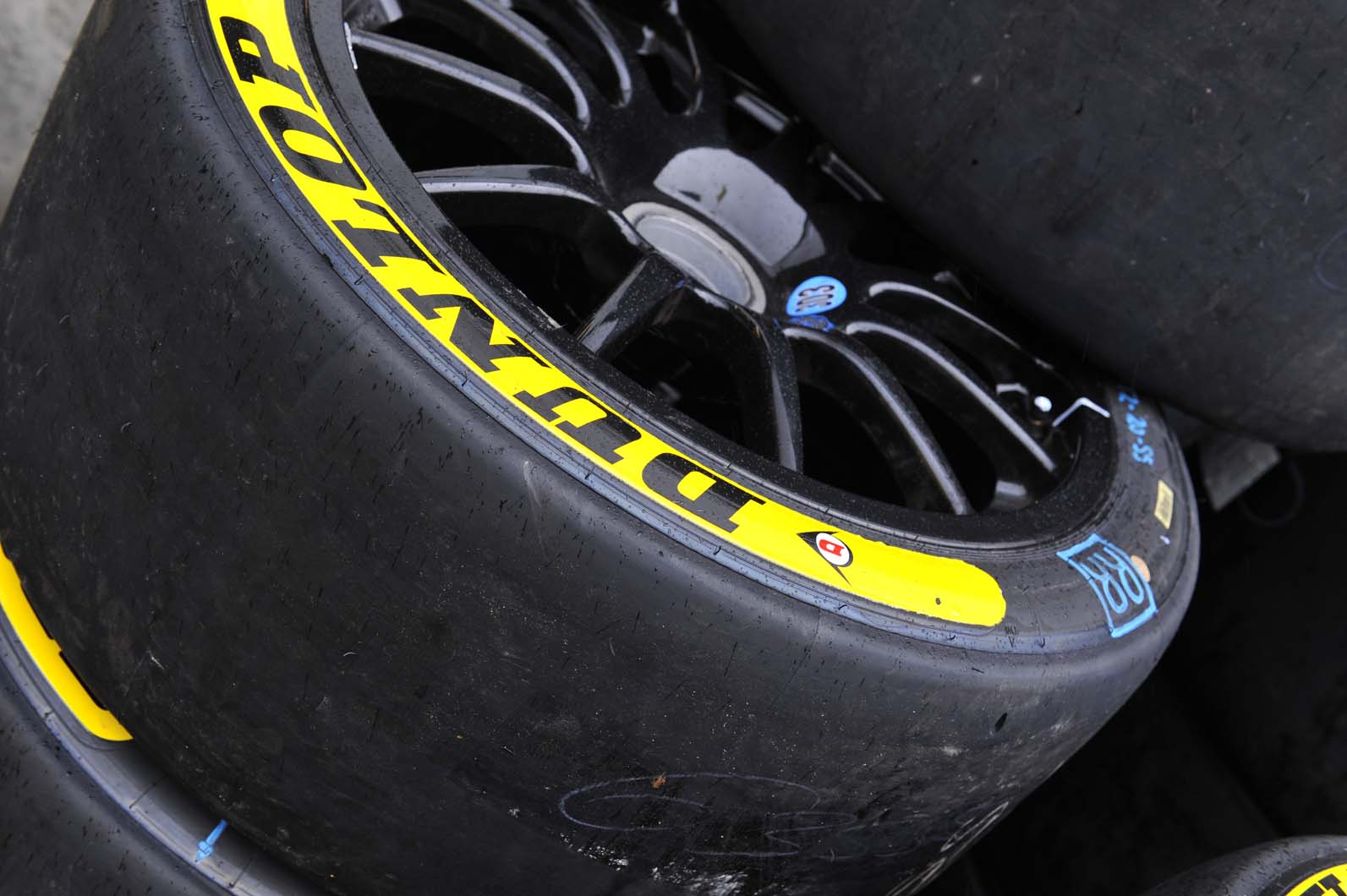 Tyres are then cured in specially designed ovens heated to 180deg C, in which they are pressed into their final shape inside moulds, clamped with a force of 112,000 kilograms. After 22 minutes in the oven, they emerge as racing tyres, and those destined to become ‘BluResponse Wet’ tyres have grooves cut into them by steady-handed tyre makers.

“We inspect every single racing tyre that is produced here at Hanau,” says Korn. “The quality control for the tyres destined for the BTCC, and all motorsport for that matter, has to be second to none.”

The natural rubber Dunlop uses comes from Thailand, Malaysia and Indonesia, because rubber trees grow best in the rainforests of those countries. To extract the rubber, farmers ‘wound’ a tree’s trunk with a cut and capture the liquid latex that spills out.

This latex (or rubber milk, as it is sometimes known) is filtered and mixed with formic acid to help change its state from liquid to solid. Already it is recognisable as a rubbery material, but the farmer has to compress it through a rolling machine to create the thin rolls that are eventually sent to Hanau.

The rubber compound can be altered with additives, including carbon black (a fine carbon powder) to add rigidity, before it’s sent to be worked into a familiar ‘black and round’ form. 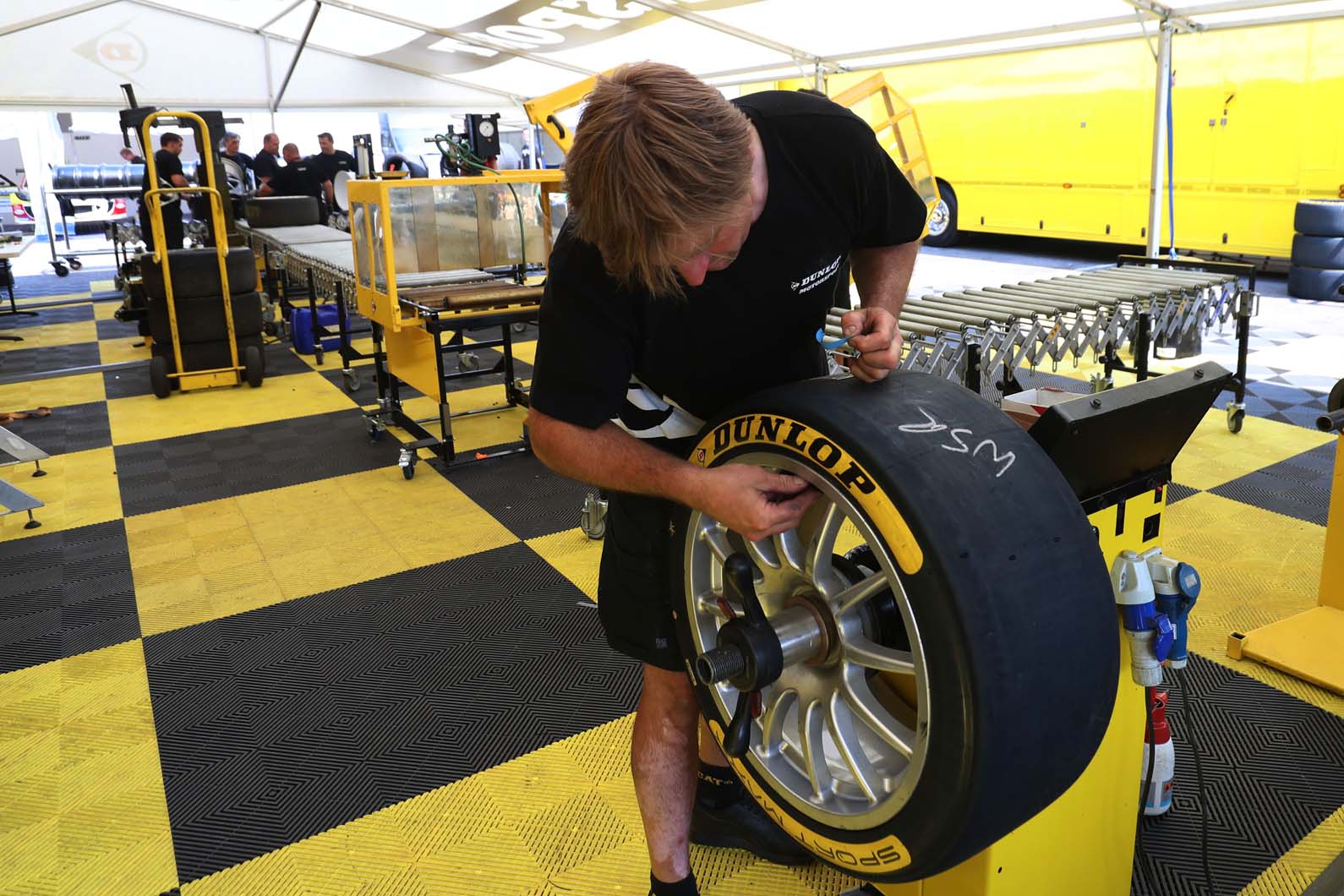 Dunlop supplies each BTCC team with 16 tyres per race weekend, during which time they remain in “intensive care”, according to race tyre engineer Stefan Nasello, because they are continually managed and observed by drivers and teams.

“In the toughest environments, such as Le Mans, our racing tyres have been pushed to the limits with quadruple stints,” says Nasello.

That means this natural rubber product has to survive being driven at race pace for about 460 miles.

A day in the life:

The story of a tyre becomes more significant when it is mounted to the BMW 125i M Sport of British Touring Car Championship points leader Colin Turkington. We followed one of Turkington’s Prime tyres (medium compound) at the recent Diamond Double event at Snetterton, where the distance of the final race was extended to 20 laps — more than 40 minutes — to celebrate 60 years of the BTCC.

This tyre was one of 12 Primes available to Turkington. It was scrubbed in during free practice and then “mounted to the right front corner in qualifying”, explains Dunlop UK brand manager, Mickey Butler. “It did the whole session, where it performed well and showed no signs of abnormal wear.” The tyre was then mounted to the left rear of the BMW for the race, meaning it was located on the driven axle on the side that suffers most abuse on a clockwise circuit. “The tyre had a hard time on track because it was physically damaged from side impacts against other cars,” said Butler. Turkington’s sixth-place finish put the outer sidewall to the test, but Butler was satisfied that “it did its job”.

“It came in at its target pressure [about 11psi above cold] and the wear rate was as predicted,” Butler said.

There’s no reward for a hard-working Dunlop in the BTCC, however, as our tyre quickly found out. “It’s already been recycled,” said Butler.

Visit Autocar Tyres to find your perfect tyre at an affordable price - plus free fitting from a local fitter.

Yes I found the article informative and interesting, maybe more articles like this on every day mundane stuff stuff we take for granted like Steering Wheels, Suspensions and the like...?