BACK TO ALL NEWS
Currently reading: Murray Walker: Watching F1 with the commentator legend
UP NEXT
Lamborghini boss details 2023 super-hybrid and new models

Murray Walker’s F1 commentary was loved and unrivalled, and continued into retirement. We joined him at home for a race in 2017
Share
Open gallery
Close
Share story

Legendary Formula 1 commentator Murray Walker has died at the age of 97. We're remembering him with a look back at the time we joined him in his lounge to watch a race live, and enjoy his impassioned narration. The following feature is from December 2017.

We’re into the last week of October and Lewis Hamilton has just won the US Grand Prix at the Circuit of the Americas.

With three races to go, it’s already obvious that the main beneficiaries of this year’s Formula 1 season will be Hamilton and Mercedes-Benz. In the Autocar office, we’re discussing ways of spicing up the remaining races – especially Abu Dhabi, the last.

Some of us, of course, are so keen on F1 that we’d be happy to watch paint dry on the side of an F1 car. But some of us aren’t. “The only way to enjoy the last race,” offers someone, “would be to watch it with someone you can be certain will enjoy it. Someone like Murray Walker...” 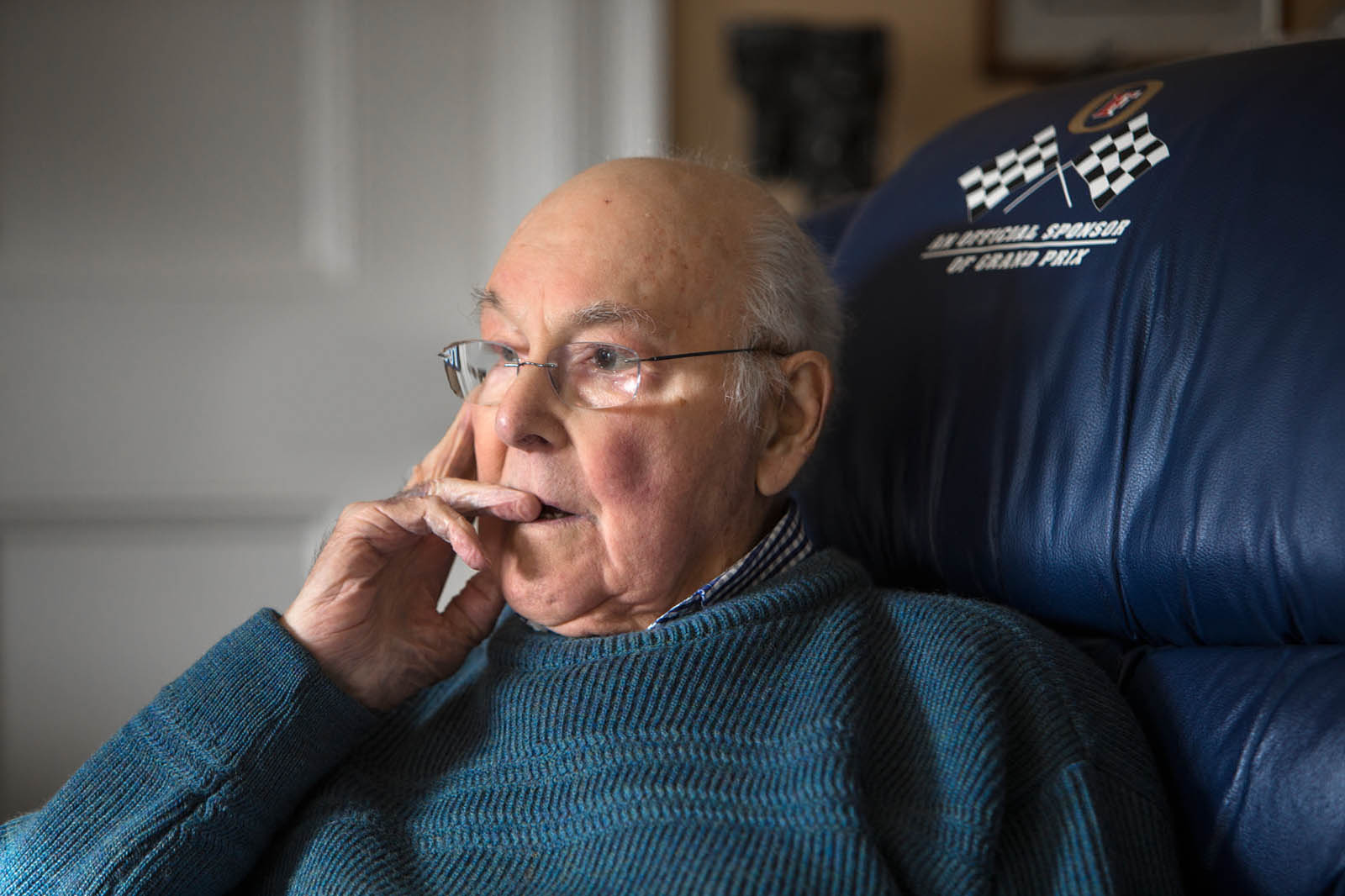 It is a killer idea. The veteran broadcaster may have stepped away from full-time TV commentary well over a decade ago but, even at 94, he’s still only semi-retired (“I just do the things that appeal to me”) and remains a much-loved figure in F1. For many, indeed, the name ‘Murray’ stands for the F1 enthusiast-in-chief of the English-speaking world.

I contact Walker (who in meetings past has helpfully outed himself as an Autocar reader) and pretty soon we’ve made an arrangement whereby photographer Stan Papior and I will present ourselves at his house, surrounded by woodland on the edge of the New Forest, at noon on race day, in nice time for the Channel 4 race build-up to begin.

Murray sends us crystal-clear instructions that sound like they have come from a 30-year-old. Our exchanges remind me about one of his instinctive skills: using information to put you at ease. “Contrary to public belief, I don’t get all passionate and throw things at the TV during the race,” he advises. “I just sit quietly, hopefully taking it in. But there’s no reason why we can’t talk during ‘our’ race…” 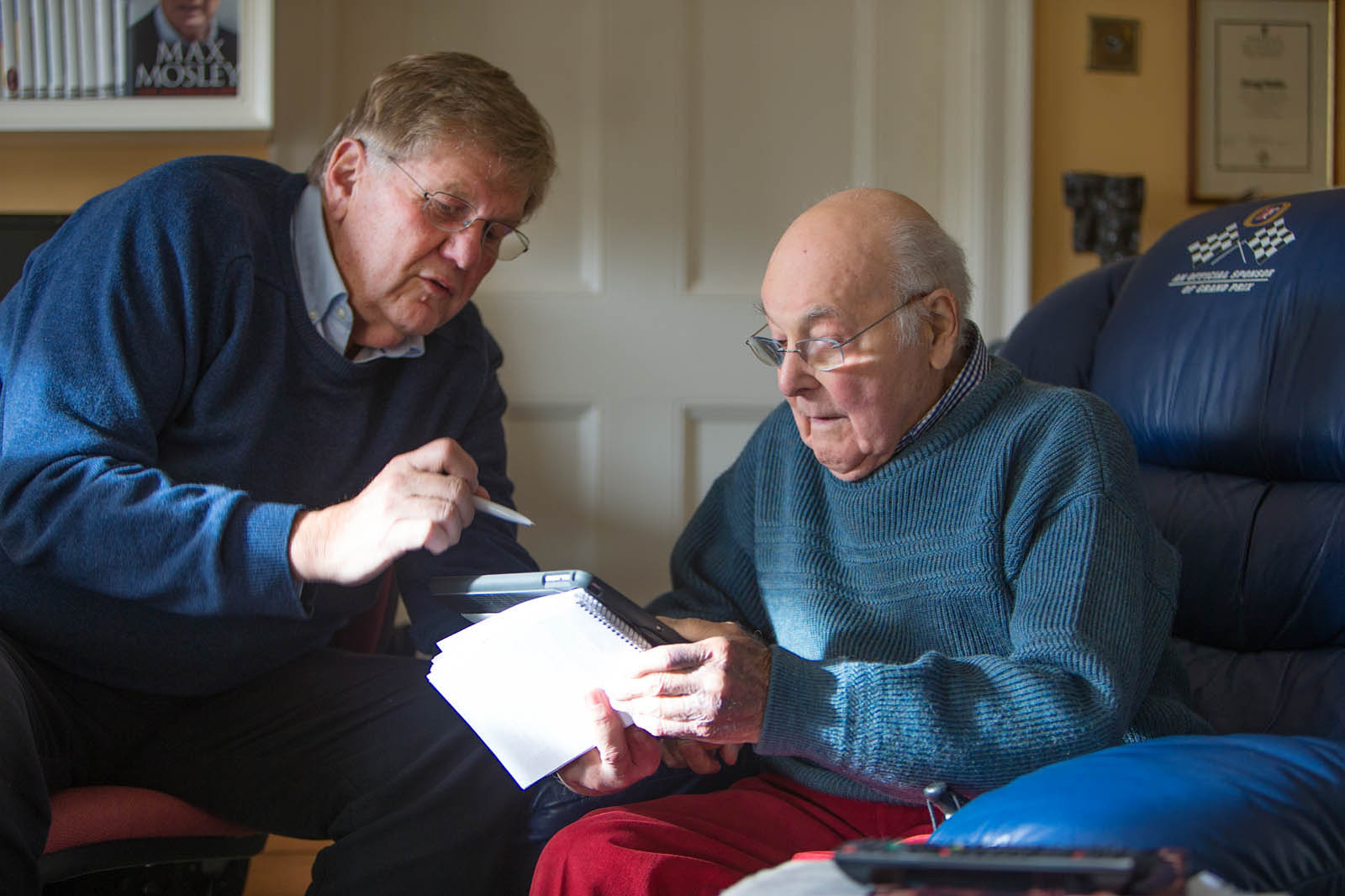 On race day Walker greets us at his front door with the famous smile and directs us to a comfortable sitting room that features some – but not too many – souvenirs and curios from a long career. I’ve been here before: Walker doesn’t set much store by collecting trinkets. He’d much rather show you the TT medals won by his father, Graham, a famous racing motorcyclist-cum-engineer-cum-commentator.

The telly is tuned to Channel 4. Why the free-to-air transmission rather than a subscription to Sky? Murray jokes he’s “too bloody mean” to pay the Sky fee but the truth turns out to be that his long-time producer and friend, Mark Wilkin, continues to run the Channel 4 transmissions. It’s a matter of loyalty, a principle that steers much of what Walker does.

He’s fully briefed on yesterday’s qualifying times and is much more up to speed with the minutiae of the contest than I am. He fearlessly declares a preference for a Sebastian Vettel-Ferrari win (“because F1 needs Ferrari to be strong”), zeroes in on the potential race between the Mercedes drivers (“Bottas will want to beat Vettel to second in the championship”), expresses a hope that Renault will take sixth in the constructors’ championship over Toro Rosso and Haas (“they need to demonstrate results from all the investment”) and hopes Daniel Ricciardo can score enough points to come fourth in the drivers’ championship.

Ben Edwards, David Coulthard and friends are taking the TV audience through stuff Murray and I learned yesterday so we get into Ferrari discussions: Walker has had plenty of contact over the years with the famous red team. He recalls being taken by the then technical director Ross Brawn on what was described as “the Heineken tour” of the Fiorano F1 race workshops – the parts other tours couldn't reach. 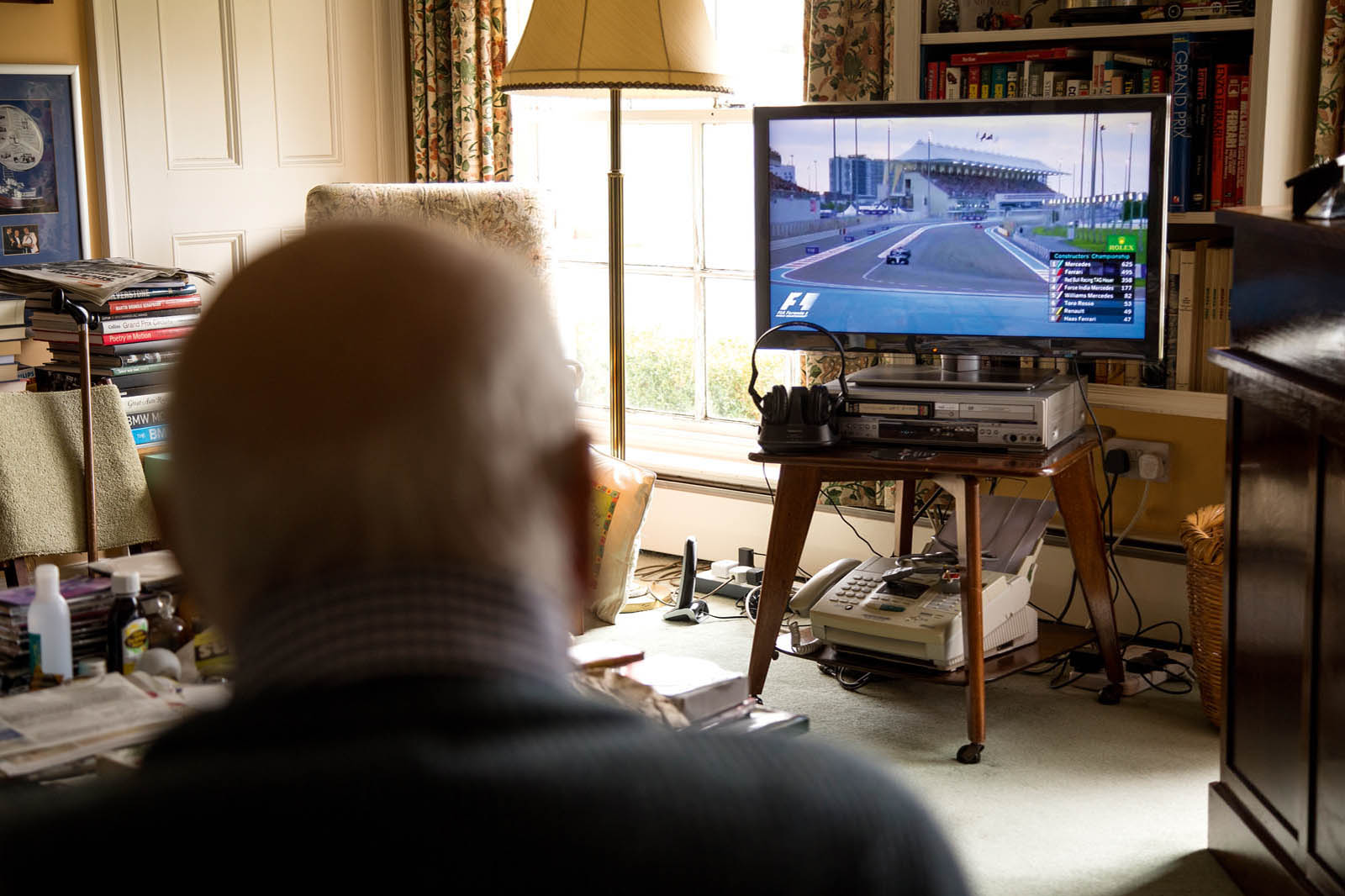 He also met Enzo Ferrari at various times and proudly displays a book signed by ‘il Commendatore’ in the famous purple ink. Back in the present, we touch on comments by the current boss at Maranello, Sergio Marchionne, to the effect that he might take Ferrari out of F1 if new rules aren’t framed to suit the Prancing Horse. Murray is rightly sceptical: “If he did that, he’d have to leave the country, wouldn’t he?”

Talking to Walker is a rare experience: you realise how different he is from most prominent people, whose idea of listening is actually waiting to speak. Walker has a huge store of tales and is used to being pressed for a comment, but he’s also interested in what you have to say.

I press him on the ego thing. “Everyone has one, I suppose, and I’m flattered to have had so much recognition over the years,” he says. “But it’s really all geared to the power of television, not me. The only difference between me and anyone else is I’ve appeared on the screen a lot. You shouldn’t forget people can get rid of you at the touch of a button…” 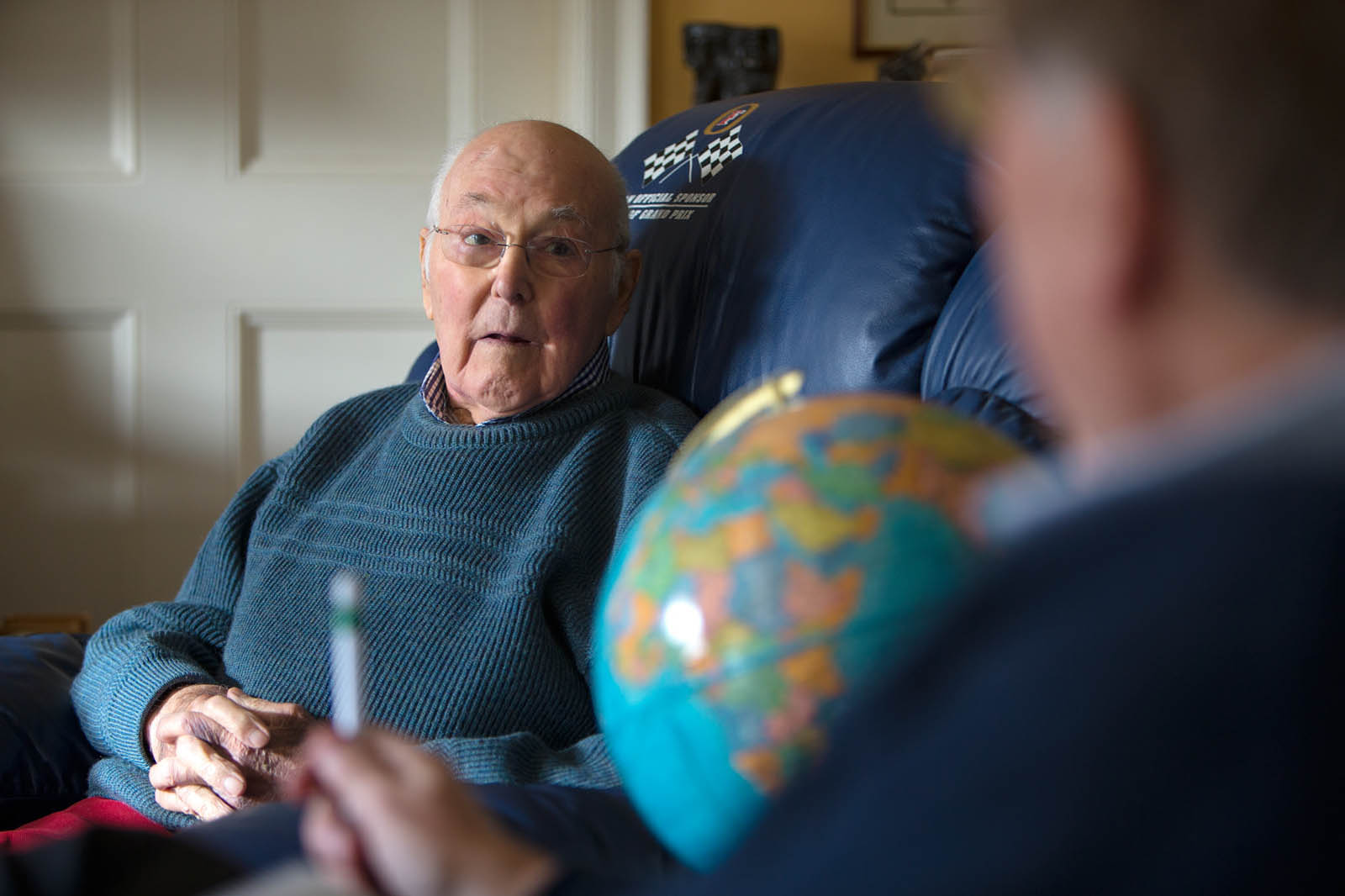 I tell Walker that Damon Hill has recently reprised MW’s most famous commentary utterance – “and I’ve got to stop, because I’ve got a lump in my throat”, delivered as Hill was about to win his 1996 world title – as part of a 94th birthday tweet, whereupon the whole thing has turned into a ‘knighthood for Murray’ campaign backed by thousands. “That’s nice,” says Walker, not taking it seriously. “I’ve always liked Damon. He’s one of the most intelligent people I’ve met in Formula 1…”

The race start is getting close. Relaxed until now, Walker is on the edge of the armchair and his eyes frequently check the screen. We both notice the ‘Go, Go, GO!’ on an overhead sign. Remembering Walker’s other successful career as an advertising man (he wrote many catchy slogans and oversaw ‘A Mars a day helps you work, rest and play’ as the account manager), I ask if that famous race-starter was a deliberate creation. He bats the idea away: “You say what’s in your heart, Steve,” he says. “You don’t have time to work those things out.”

The TV noise builds, the lights go on, then out, Valtteri Bottas erupts off pole ahead of Hamilton and forges through the first corner into a handy lead he is never to lose. Hamilton sits a couple of seconds behind, just out of Bottas’s turbulence, and Vettel behind him, keeping up for the first few laps, then gradually losing time in third. Ferrari team-mate Kimi Räikkönen is losing even more. 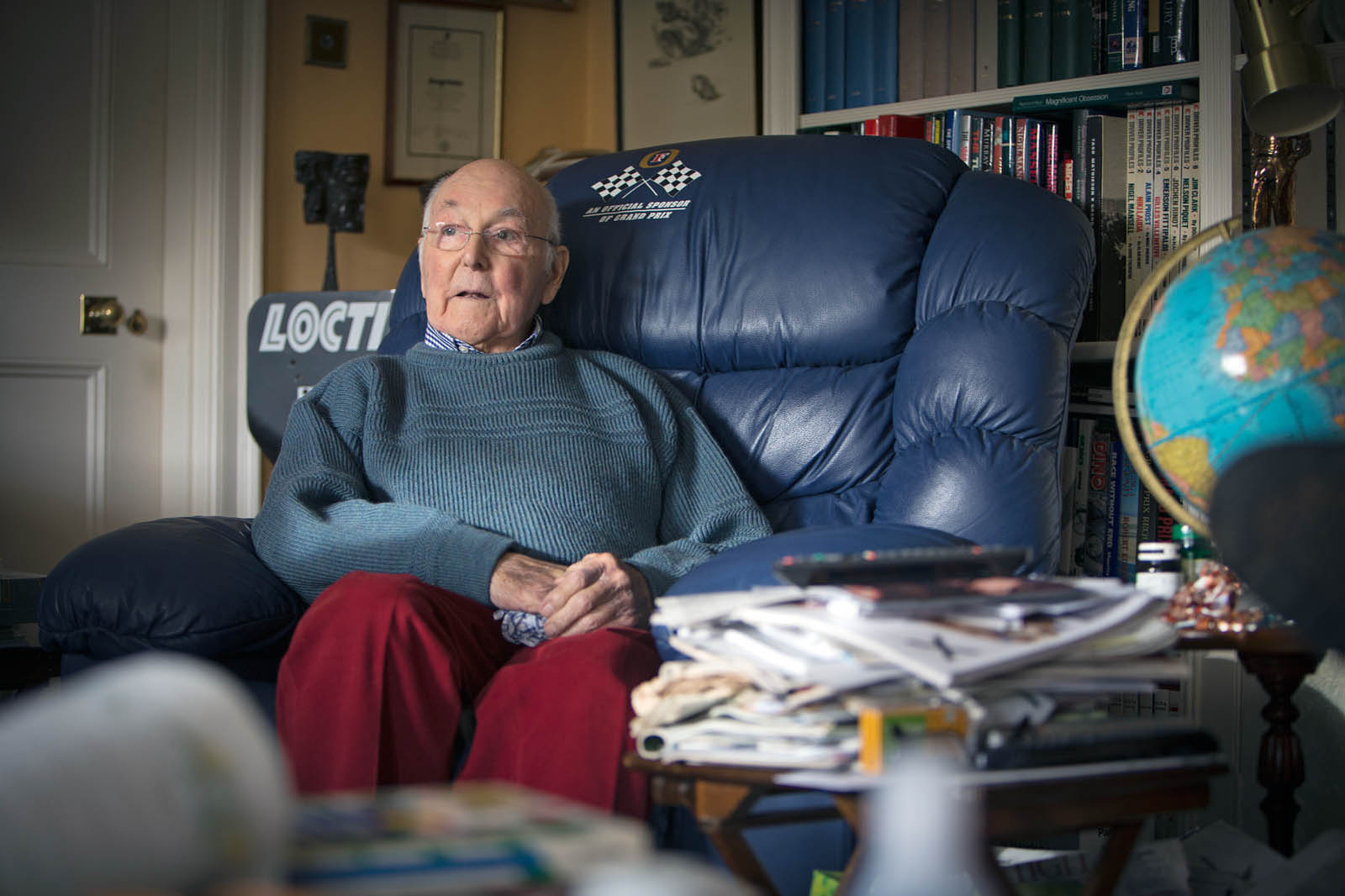 Ricciardo isn’t far away but his hopes are soon dashed by unreliability. This is turning out to be an easy one for the commentators, we both acknowledge. That isn’t always the case, Walker asserts, and it was especially tough before electronic lap timing arrived.

“It was always risky,” he explains. “You’d do your best to interpret the pictures, without having any control over what was being shown. I’d time the gaps between cars with my stopwatch while keeping talking and watching movements through the field on an old-time lap chart. The risk was always that while I was looking away, the leader would go off, catch fire, jump out and punch a marshal – just as I was telling the world Derek Warwick had moved nicely to 12th. You could take a lot of stick over that.” Walker acknowledges that his spur-of-the-moment commentary sometimes contained ‘Murrayisms’ but it never played much on his mind, mainly because he was doing the job professionally and nobody ever wanted him to stop.

The Abu Dhabi race is, well, boring. “It looks like Hamilton isn’t trying to catch Bottas, and Vettel can’t catch Hamilton,” says Walker. “I think we’re seeing the finishing order – unless Hamilton’s ego makes him have a go towards the end.” We’re well over half distance, but there’s time to discuss one of F1’s greatest characters, Ron Dennis (“a difficult man, though I never had any trouble with him”). Dennis gave Walker his one decent driving stint in an F1 car, a Ford DFV-engined McLaren MP4/1C, at Silverstone in the early 1980s. 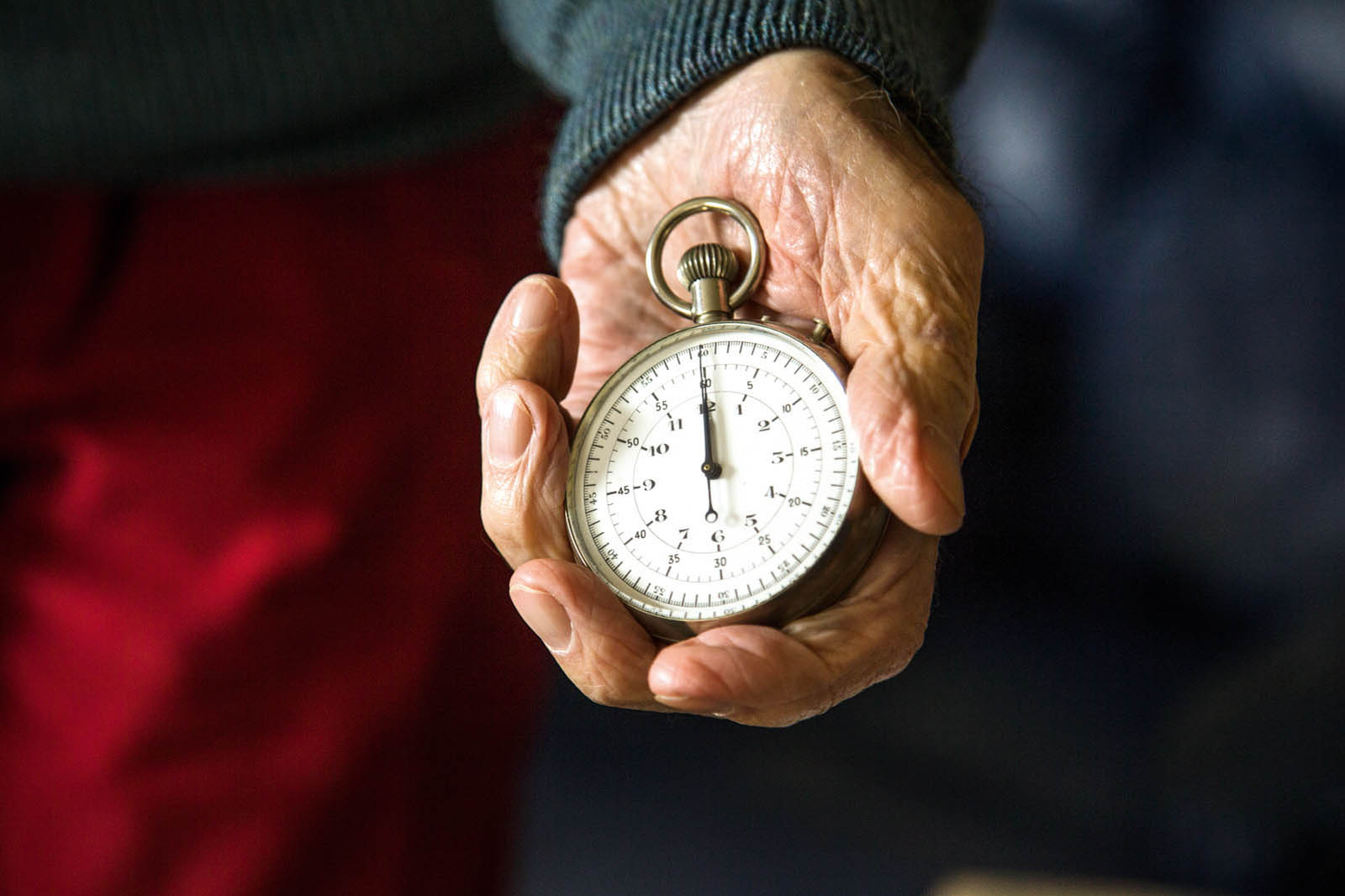 “He handed me Niki Lauda’s overalls and a pair of racing boots. Everyone kept saying ‘We’re looking forward to lunch, Murray’, because they’d been told I’d be on the circuit during the lunch interval – on my own – with everyone looking on. I did 10 laps (they say they hung out the pit board after three) and I think it went pretty well. Someone asked me what revs I’d been seeing on the straight and I said 10,000. [McLaren race driver] John Watson reckoned that was over 150mph.”

On the screen, Bottas crosses the line just as I’m asking the hammiest of all hack’s questions: who’s the person among the F1 community you’ve liked best in all your years? Walker takes time to think about it. I suspect he’s doing it to be nice given that, in such a long career of talking, he’ll have been asked every question going – including this.

“Ross Brawn,” he says at last. “I admire him enormously. He looks rather like a sleepy old owl, but he’s a very nice, very normal bloke. And people love him. On our tour of Fiorano, I’ll never forget how people really seemed to worship him. Mind you, he’s got a helluva job to do now, sorting out the future of F1 [in his new role as sporting boss]. But if anyone can do it, he can.” 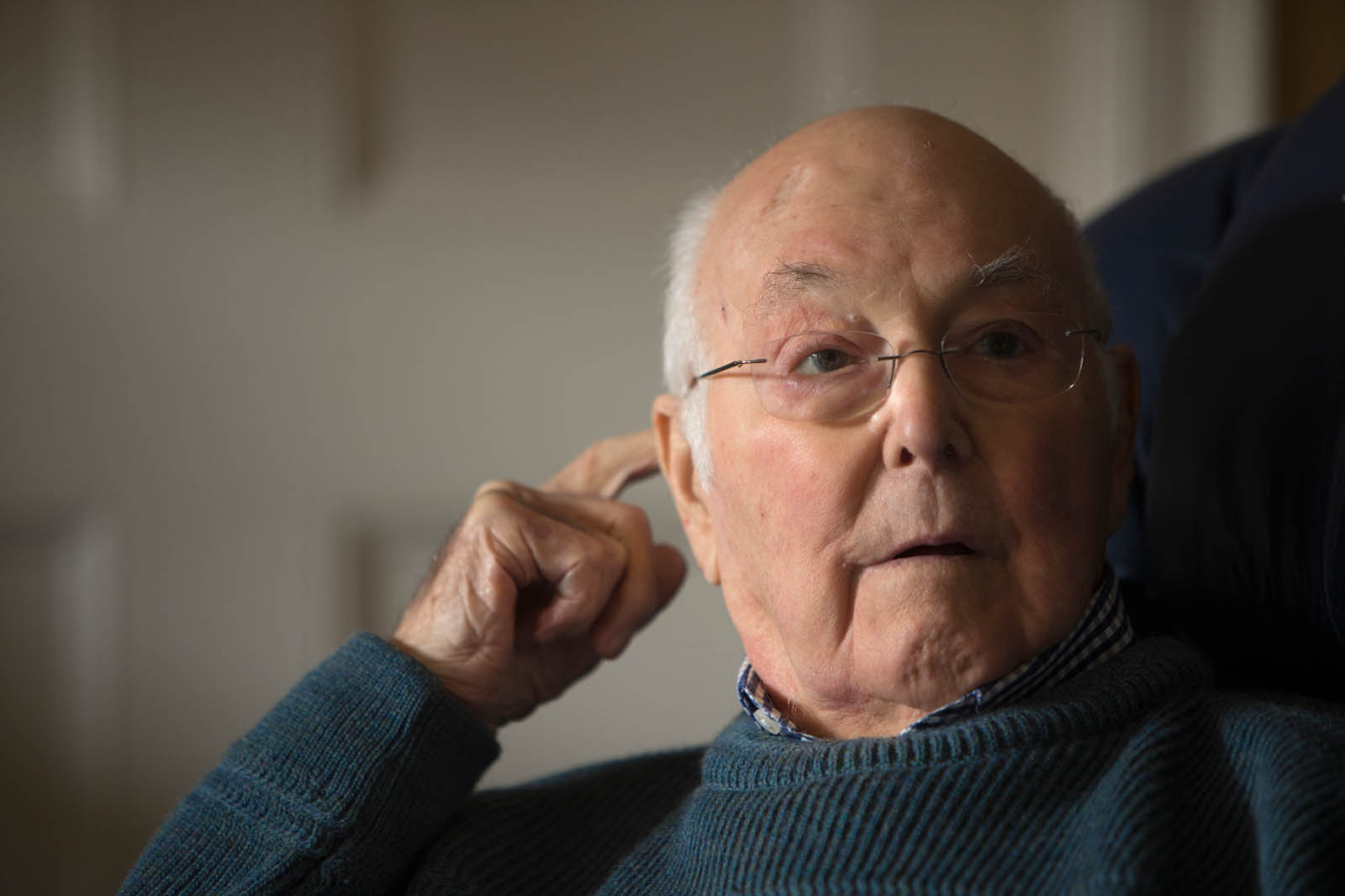 Like Damon Hill, Murray Walker is the son of a famous racing father. Graham Walker (1896-1962) was a World War I despatch rider who, despite a wartime leg injury, became a successful works rider for Rudge, Sunbeam and Norton.

He competed many times at the Isle of Man, winning the Lightweight TT in 1931 among other victories. When racing ended, he began a second career in broadcasting, his radio and TV TT coverage making him even more famous than he already was as a rider. He was joined at the microphone from 1949 by Murray, his only son, who has been broadcasting in his own right ever since.

The inevitability of it all doesnt make it any easier.....Stirling, Norman, John, now Murray all in a short space of time!

All had a good innings in fairness when so many are taken in their prime these days.

A true gent and legend. I

A true gent and legend. I miss listening to him when it's race weekend.

Looks good for 94 but rather than awarding him a gong, why not club together and buy him a large screen TV.

Looks good for 94 but rather than awarding him a gong, why not club together and buy him a large screen TV.

Given F1's current entertainment value Murray has good reason for using a small TV. Maybe he watches most races on his phone?