BACK TO ALL NEWS
Currently reading: How an old railway tunnel is becoming a top-secret test track
UP NEXT
2021 Mercedes-AMG S63 due imminently with snarling V8 hybrid

UK firm Totalsim is close to bringing this idea to fruition in Northamptonshire, thanks to Dr Beeching
Share
Open gallery
Close
Share story

Less than a tenth of the way into Catesby Tunnel’s 1.6-mile extent, it’s obvious that a large, dark hole is going to pose a photographic challenge. But standing within the vast, dripping structure that runs beneath one of the prettier parts of rural Northamptonshire, it’s equally clear that writing a story about this fascinating project is going to be a serious ask as well. This isn’t a tale about what’s here but of what isn’t. Although it’s soon to be used at the cutting edge of aerodynamic research, Catesby Tunnel isn’t a wind tunnel. Rather, it’s best thought of as a non-wind tunnel – one where conditions will be as calm and consistent as possible. And that makes it a genuinely radical advance.

The earliest wind tunnels were built for research purposes in the 19th century, but it was the arrival of aircraft that created an urgent need to study the effects of moving airflow. The Wright brothers used a basic wind tunnel to help develop their revolutionary Flyer of 1903. But aerodynamics reached the automotive industry far later. The earliest cars were too slow to require detailed understanding of the effect of the air flowing over them, as was demonstrated by both their generally tall, upright structures and the insect-spattered goggles of the people who drove them.

It took the pioneering work of German professor Wunibald Kamm to prove the benefits of studying airflow. He led the creation of the first full-size automotive wind tunnel in the world, opened near Stuttgart in 1930 and still in use today. The shortened tail of the revolutionary 1938 BMW 328 Kamm Coupé was proof of the benefits of the new science, being much more efficient than the standard 328. Decades later, as motorsport entered the era of aerodynamic downforce, so the importance of wind tunnels grew again, although the speeds involved meant that almost all were built to smaller scales and used downsized models. 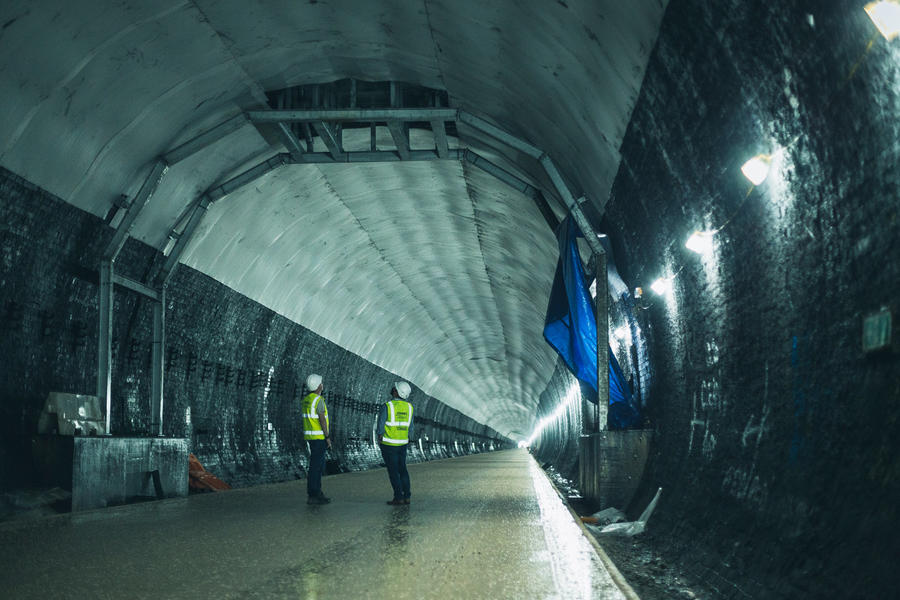 Wind tunnels have become vital tools for the development of both race cars and road cars – especially given the importance of aerodynamic efficiency as EVs battle for longer range. Yet they’re hugely expensive to both build and operate, with many of the more powerful ones costing more than £100,000 per day to run. This has brought us to what, until very recently, was just a disused railway tunnel in English countryside.

The best ideas often come from lateral thinking. Wind tunnels make the air move at speed around the object being studied. The obvious, easier alternative is to make the object itself move – normally pretty easy for a powered vehicle with wheels – while keeping the air still. At a basic level, this is easily done, and much aerodynamic testing does take place in the real world. But the consistency required when chasing fractional gains has always been a challenge given the influence of prevailing wind, weather and variable temperatures. What’s needed is a carefully controlled environment – one sealed from the influence of the elements. The idea of using an existing tunnel isn’t a new one. In the US, Chip Ganassi Racing took over an abandoned one in Pennsylvania in 2003, and this has since been used extensively for motorsport development (including, reputedly, by Formula 1 teams). Here in the UK, aerodynamicist Rob Lewis had a very similar idea. Having worked for the BAR and Honda F1 teams, Lewis founded his own company, Totalsim, specialising in computational fluid dynamics (CFD) modelling. As well as automotive clients, Totalsim has worked closely with athletes seeking to improve aerodynamic performance, especially cyclists; so much so that Lewis has won an OBE for services to Olympians.

In 2013, he decided to look into the possibility of repurposing an abandoned railway tunnel in Britain for testing. And by happy coincidence, the longest, straightest and tallest of these proved to be in Catesby, four miles south-west of Daventry, so pretty much next door to ‘motorsport valley’.

“There was lots of climbing through nettles when we first came to have a look,” remembers Totalsim’s Jon Paton, the aerodynamicist who shows us around the site. “Then we got to the small matter of finding out who it belonged to and negotiating to use it.”

Once inside, they found the tunnel was partially flooded by blocked drains and the vertical vents that once carried smoke away was full of dead birds and animal bones. A collection of recovered relics now sits in the covered workshop. Protecting the habitat of the bats living within the abandoned structure required it to be narrowed at each end, so they would still have space close to the portals. Eight years later and with around £20 million spent so far, the tunnel is close to its rebirth.

Entering the clammy darkness of Catesby Tunnel’s southern portal, it’s clear that none of this would have been possible without the engineering prowess of the late Victorian period. Even after six decades of neglect, the structure is in remarkably good condition. The roof has been lined to help reduce drips from the damp brickwork, but the exposed section is still heavily coated with thick soot deposits from nearly seven decades of hard-working steam locomotives.

Although it rises on a steady 1:176 (0.006%) gradient, the tunnel is both flat and almost perfectly straight. “We were amazed when we actually scanned it,” says Paton. “It’s within a couple of centimetres of being perfect.” A new concrete base is being laid, and this will be covered with an ultra-precise layer of Tarmac to create a uniform surface with no gaps or expansion joints.

“The most important thing for testing is consistency and repeatability,” explains Paton. “That’s where high-quality data comes from.”

The finished tunnel will be linked to a preparation area by a covered passageway, ensuring confidentiality. It will also have turntables at each end so that cars can return to base without an Austin Powers-style shuffle.

The expectation is that much of the early use will be for what’s known as coastdown testing: recording the speed profile as a car coasts in neutral to work out drag. But Catesby Tunnel can also be used for more ambitious testing from the off. For example, Chip Ganassi’s tunnel has reportedly been used to study the aerodynamics of Nascar racers drafting each other at speed.

The team behind Catesby Tunnel is already thinking of future upgrades. These are likely to include ultra-sensitive pressure-sensing floor plates, an internal GPS antenna system (signals can’t get through the ground above), fans to allow the effect of sidewinds to be studied and even a splash area so that spray patterns can be created. 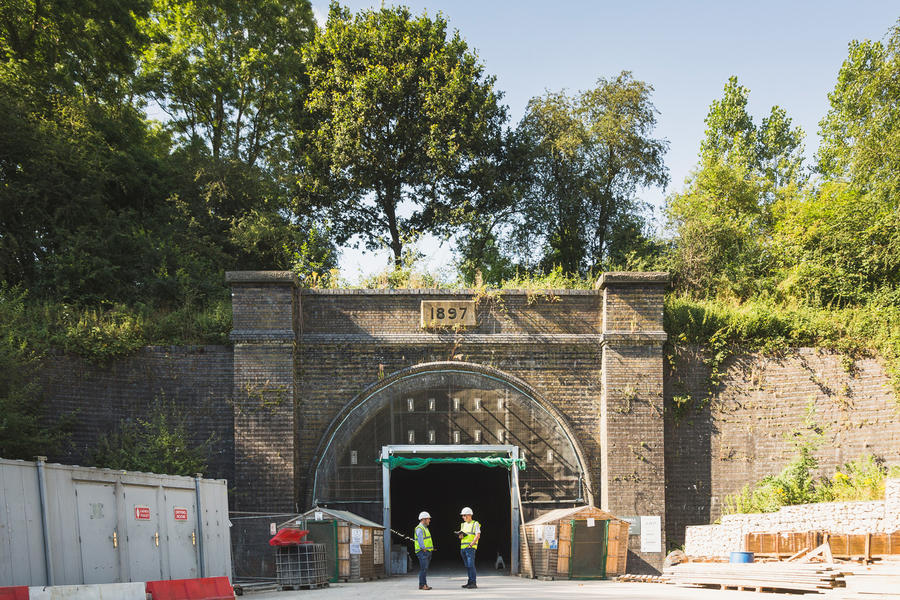 Not all clients will be automotive (Totalsim’s work with elite cyclists is likely to bring some to Catesby) and various record attempts are already being plotted. “[TV presenter] Guy Martin has been on the phone,” confirms Paton. I propose that the tunnel could be one of the few places to test the idea of a car making enough downforce to drive inverted: “Yep, that has been suggested as well.”

Safety is obviously important, so emergency intervention vehicles are set to be posted at either end. The tunnel won’t have a hard-and-fast speed limit, but every test will require a safety case to be made. “Obviously that’s going to depend on what people want to do,” says Paton. “50mph in a normal car will be different from twice that in something with a prototype lithium ion battery pack.”

One surprise is that the tunnel doesn’t echo. It’s acoustic profile is very flat and noise seems to be almost immediately absorbed by its curved walls. The sound made by a loud car inside is still going to be pretty special, though. The thought of what a high-revving V12 would sound like in here is a tantalising one. Plus, it being closed off from the outside world means testing should be able to take place around the clock without disturbing anyone.

Paton admits the venue is going to be a blank canvas: “People keep coming up with new ideas, some of which we hadn’t even thought of. The answer is usually: ‘Why not?’”

Catesby Tunnel should be open to clients from next month, and although Subaru has invested in the project, the idea is that it will be available to anyone who is prepared to pay. So yes, there’s light at the end of this tunnel.

Aerodynamics: why virtual testing is better than a wind tunnel

@ Bob C, not to pee on anyone's cornflakes - because it's a rail tunnel, so it is just marvellous - it was very much a vanity project done to appease the the then land owner, H. A. Attenborough, who didn't want trains travelling through his back garden.  Much of it is cut and cover, and that which isn't was created using nine construction shafts so keeping it straight wasn't the most remarkable part.

The most remarkable part is that the whole line - including this tunnel and all bridges - was sized, levelled, and gauaged to run trains with whole lorries on them to be able to run through to the Channel Tunnel, which was very much a thing when planning and development of the line was well in progress, but had died off by the time it was close to completion.

It is NOT however suitable to run a modern high speed line, contrary to what Chris C says.  This tunnel, in parrticular, meets no standards for high speed running and would require over boring (to 11m from the current 8m) to be able to run two trains with the minimum of safety standards, so limiting speeds, or run a separate line for opposite running.  At best it could run a freight line, which has been proposed, but Rugby Borough Council, principally, oppose such lines and since they own much of the land to the north through which the lines would need to pass, this is significant, as well as the land passing through a much enlarged Rugby, which limits the desirability of a HS line, even if other technical limitations were not in play.

Not exactly top secret, eg it has already been shown on a BBC programme covering the Great Central Railway - a defunct high speed level and straight mainline linking London to Leicester, Nottingham and beyond. Now if they had had the common sense to reopen it and scrap HS2 imagine how many billions would have been saved....