BACK TO ALL NEWS
Currently reading: The fossil-free quest: How Renault is revolutionising a Portuguese island
UP NEXT
Ford Puma ST hybrid prototype spotted at the Nurburgring

The fossil-free quest: How Renault is revolutionising a Portuguese island

Cars and the environment – they’re a big part of the problem, aren’t they? We all know that, of course, even if their contribution to global warming is slightly smaller than general opinion would have us believe.

But cars have certainly never been part of the solution, all of them requiring energy generated from somewhere, whether they’re fuelled with petrol, diesel, compressed natural gas or hydrogen. Most of that energy will generate CO2, and all of it will be expended driving only the car and its systems. That’s the way it is now, and the way it has been for the 120-plus years that the car has been around.

But electric vehicles have the potential to do more than this, as Renault is demonstrating on a tiny island 30 miles off the coast of Madeira. They are zero emission at the tailpipe and potentially zero emission from well to wheel if their energy source is renewable. And they can also help electricity grids make fuller use of unreliable renewables. Porto Santo is now what Renault and its pioneering partners are calling a live lab. That lab is harnessing the batteries of a growing fleet of electric Zoes and Kangoos to help smooth out the peaks and troughs of Porto Santo’s multiple electricity generation systems. 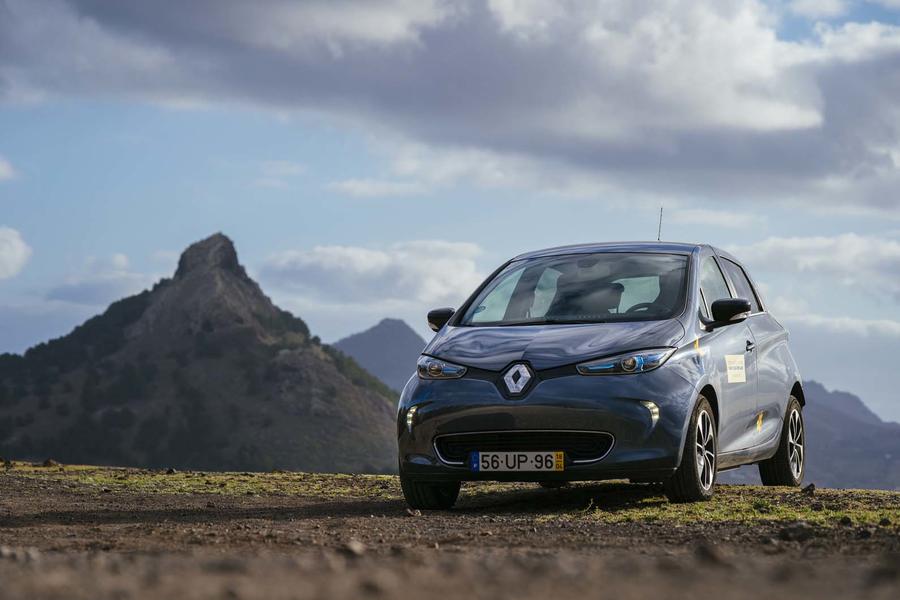 The island is isolated from Madeira’s grid, and uses a mixture of diesel generators and solar and wind power to produce energy not only for the usual domestic and commercial demands, but also to run a desalination plant (the island’s natural water wells are insufficient for the population, especially during the tourist season). The grid also supplies the 40 charging points installed to power the Renaults and a handful of other EVs.

The idea is to provide bursts of additional energy for the grid during spikes in demand and moments when the flow of renewable energy suddenly diminishes. That will happen whenever a cloud blots the sun, the intrusion reducing the solar panels’ output instantaneously and inconveniently. A less sudden power generation drop occurs when the wind subsides and the blades of the island’s so-far-solitary turbine cease to turn. In both cases, however, the grid can harvest slices of energy from any of the plugged-in Renaults. Not much at the moment, admittedly, because of the 20 Renault EVs on the island, only two have the bi-directional hardware allowing such harvestings to occur. However, that will change. The company has just announced a purchase scheme for the island’s resident motorists, the initial batch of 20 EVs dedicated to government agencies and a taxi service. 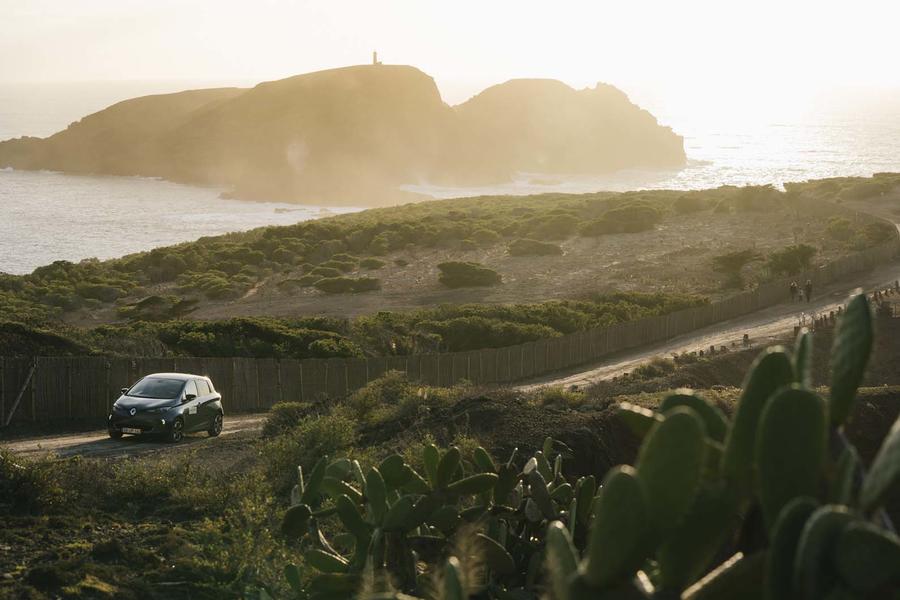 The overall aim for Porto Santos itself is to become fossil fuel-free, explains Madeira’s assistant director of the economy, Patricia Dantas, by reducing and eventually eliminating the yearly consumption of the 500,000 litres of diesel needed to run the grid’s generators. The project is part of the European 20-20-20 strategy aiming to reduce CO2 emissions by 20% from their 1990 levels by 2020, while generating 20% of energy demands from renewable resources.

There’s a long way to go. Renewables contribute 15% of Porto Santo’s electricity needs – solar accounting for 11% of that, wind 4%. The island’s geography is ideal for both sources and they are being expanded, supported by electric cars being plugged into the network. The benefits of doing this are considerable, as Eric Feunteun, Renault’s electric vehicle programme director, explains with an example.

13 May 2018 was a sunny, windy day in Germany and, critically, a Sunday, he relates. That meant that electricity consumption was much lower than for a weekday and there was too much renewable energy for the grid to handle – much of it consequently wasted. “They couldn’t balance the grid,” Feunteun says. “They had to disconnect the wind turbines but still pay for what they generated.” Incidents like this – and they are common – are why electricity grids have changed their attitude to EVs. “Originally EVs weren’t liked by the grid operators because they have very centralised power generation,” says Feunteun. “Now they want them as a balancing tool, because we’re moving towards having a lot of production points (renewables, home energy generation) and a lot of consumption points (EV chargers) and the network needs more resilience. The grid operators are now saying we need you (the EV users) to make renewables work.” “One cannot grow without the other,” adds Feunteun. “There’s a double benefit from EVs – no CO2 at the tailpipe, and they can help reduce the CO2 of power generation.”

“Everything is about smoothing,” confirms José Cotrim, distribution director of energy supplier Empresa de Electricidade da Madeira. In other words, smoothing the supply of energy across the multiple sources of diesel, solar and wind energy. The task is eased by the storage provided by ‘second-life’ batteries, from the island’s mono-directional EVs, which can be charged when there’s surplus energy generation and not charged during shortfalls, and the more flexible bi-directional EVs, which can supply the grid during a dip in renewable generation or a spike in electricity demand. While this sounds relatively simple on paper, the business of reliably managing a complicated,  multi-source grid whose output is perpetually altered by drifting clouds and capricious winds is no small matter.

Which is why The Mobility House is also a partner. Based in Munich and Silicon Valley, it’s one of the first European companies to provide charging and energy management systems for electric vehicle fleets. In essence, its monitoring systems and algorithms manage an EV fleet’s power consumption from the grid, not only smoothing the grid’s output but also enabling the fleet operator to avoid battery charging during expensive, high-demand periods. The system also manages the second-life power packs on Porto Santo. 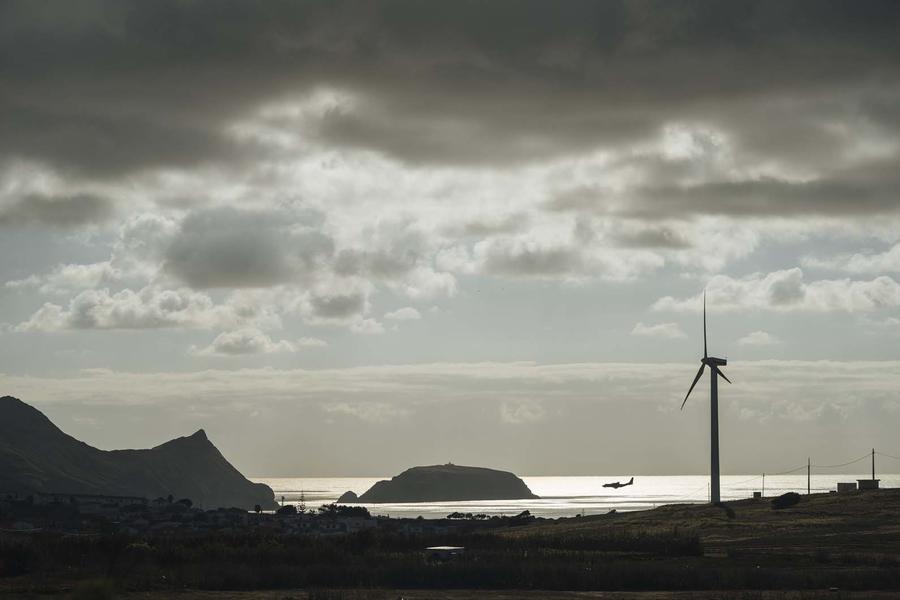 These are sourced from scrapped EVs and harnessed for the smoothing task, although there are fewer packs available than forecast. “Electric vehicle batteries are lasting longer than expected, so the supply is small,” says Feunteun. The best sources at the moment are crashed cars and the French Post Office, whose electric vehicles last only six years not because of the battery but because they lead such hard lives. Using them as part of an energy storage system postpones the day when they are recycled, and extracts a lot more use from them. “Second-life batteries are a pillar of the system,” says Cotrim. “They stabilise the grid, integrate it better and can be used to regulate the local voltage.”

Some second-life packs are already in use here, three housed in a nondescript building from which a rather fine palm tree erupts, several sourced from dead EVs in Madeira. Six batteries have been hooked up so far, their energy potential sufficient to meet the electricity demands of 50 houses for 30 minutes. They could have 10-year second lives, it’s reckoned, although this remains an unknown.

Also unknown is how long it will be before the energy buffering capabilities of EVs are in widespread use. There’s a long, long way to go before we see large-scale, adaptive electricity grids that not only generate power but shuffle it around the battery packs of electric vehicles to overcome the irregular energy generation of renewables. But it clearly makes huge sense to use EV batteries as storage buffers.

From being – literally – a potentially massive drain on national grids, electric vehicles are going to be a vital element in the harnessing of renewables to real-world demand. The Porto Santo project is a tiny step towards this – but, as this so-far-modest fleet of Renaults proves, one with unquestionable benefits. 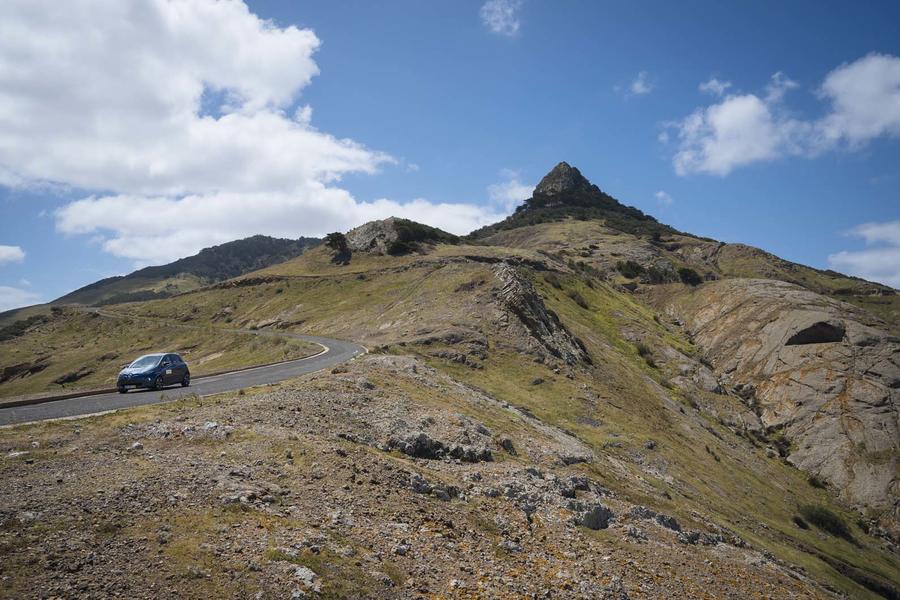 Part-decarbonising Porto Santo with electric vehicles is one thing, but how will the virtuous circle of EV energy storage get scaled up? Renault is already launching a similar project on Belle-Île-en-Mer in France, with another on Réunion in the Indian Ocean, and has introduced one of the first mainland European vehicle-to-grid schemes, in Utrecht in the Netherlands. Similar localised schemes will appear in France, Germany, Switzerland, Sweden and Denmark too. Why not Britain? “Because there are many energy suppliers,” says Renault’s Eric Feunteun, “so it’s more difficult.”

More obstacles impede these schemes, he adds, one being that not all EVs are bi-directional (including almost all electric Renaults). Another is that there are no specification rules for bi-directional EVs, potentially introducing compatibility issues, while a third is the need to “change customer mindsets”.

But there are incentives, including the fact that it’s possible to make €300 annually from selling your EV’s surplus energy to the grid. That’s fine for owners of EVs with bi-directional capability; those with EVs that can only consume from the grid are nevertheless incentivised (modestly) with €60 annually if they allow their car to stop drawing current during spikes in demand.

Sadly, it’s not practical to retrofit a uni-directional EV with a bi-directional capability, reckons Feunteun. “The labour alone would kill the idea,” he says.

Why doesn't Porto Santo try wave power since they seem to have it readily available & it's consistently reliable no matter what the conditions are.