BACK TO ALL NEWS
Currently reading: Electrified Aston Martin DB6: driving a future-proof classic
UP NEXT
Audi: No rear-wheel drive option for RS performance models

Manufacturers keep telling us that electrification is part of our future, but what about our past?

A near-silent, ion-fuelled DB6 might seem like the answer to an unasked question, but Paul Spires, president of Aston Martin Works and the man who signed the car off, is adamant it’s the right call. “We need to make sure that we’ve got the next 100 years covered,” he says, “to make sure these vehicles don’t become museum pieces.” 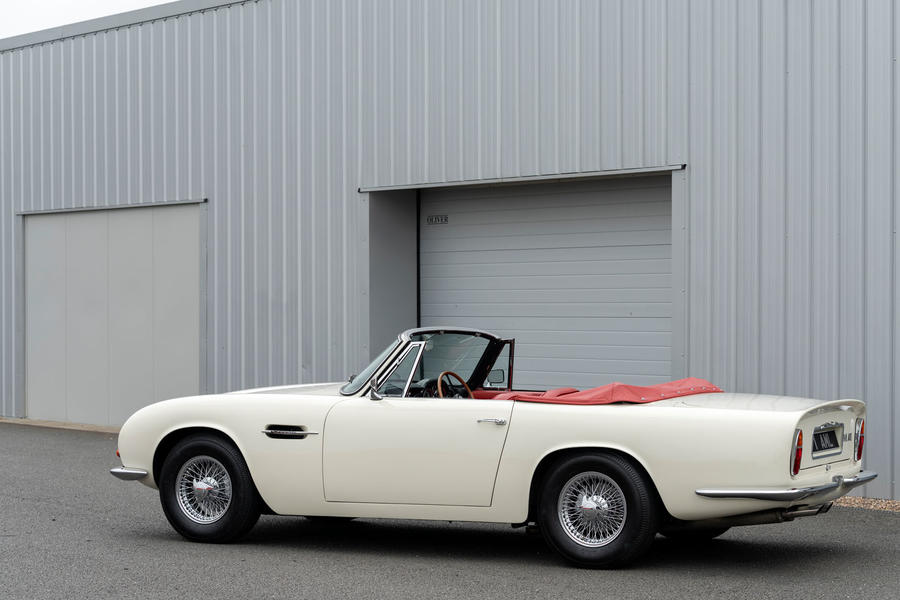 This isn’t about legislation – there are no current plans to ban internal-combustion classics in any major market – but rather what Spires describes as social pressure. First from the affluent tech-savvy buyers who are already shifting to EVs en masse, but also from a future generation who will grow up without experiencing the sounds and smell of internal combustion.

The idea is for what Spires calls a heart transplant: fully reversible electrification that keeps the core structure of a car unchanged. “I said to the development team: ‘Don’t make a single extra hole in the bodywork,’” Spires says. “They haven’t.” 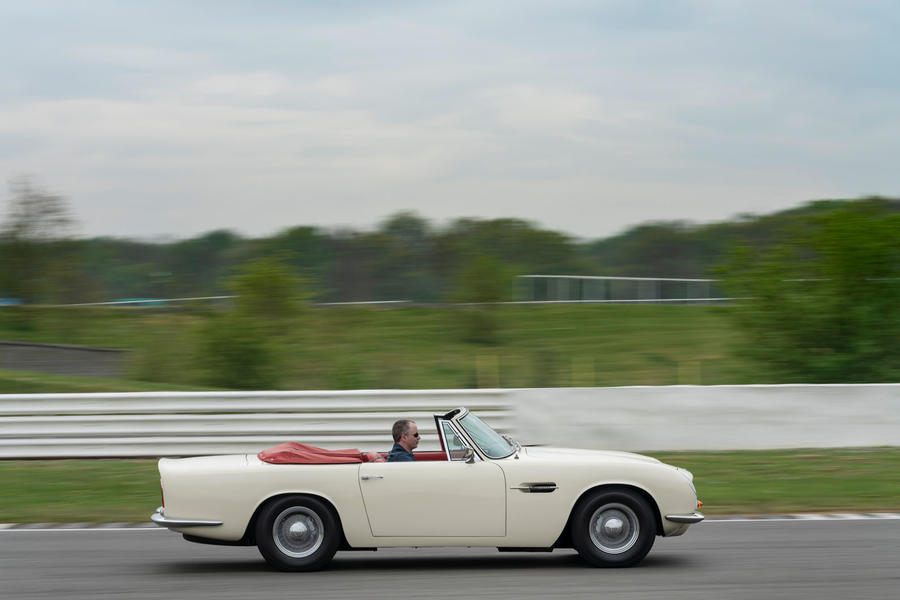 In place of the straight-six engine that it left Newport Pagnell with 49 years ago, this DB6 Volante has a module containing battery, motor and control software that fits in the same space formerly occupied by the engine. We’re not given any technical details – a production version would change specs – but we’re told it weighs almost exactly the same as the original engine and produces similar power. If it sounds familiar, it’s because Jaguar did something similar with the E-Type Zero last year, although Spires insists Aston started work before Jaguar did.

Although the basic idea is defined, the details are not and Spires says much about the demonstrator would not make it to a finished system. That includes the Volante’s continued use of its original five-speed manual gearbox. A fully developed one would switch to a single-speed drive. The concept is also passively cooled, so it’s unable to deal with the thermal loads of hard use. A production version would be actively cooled and therefore be both tougher and capable of supporting fast charging. 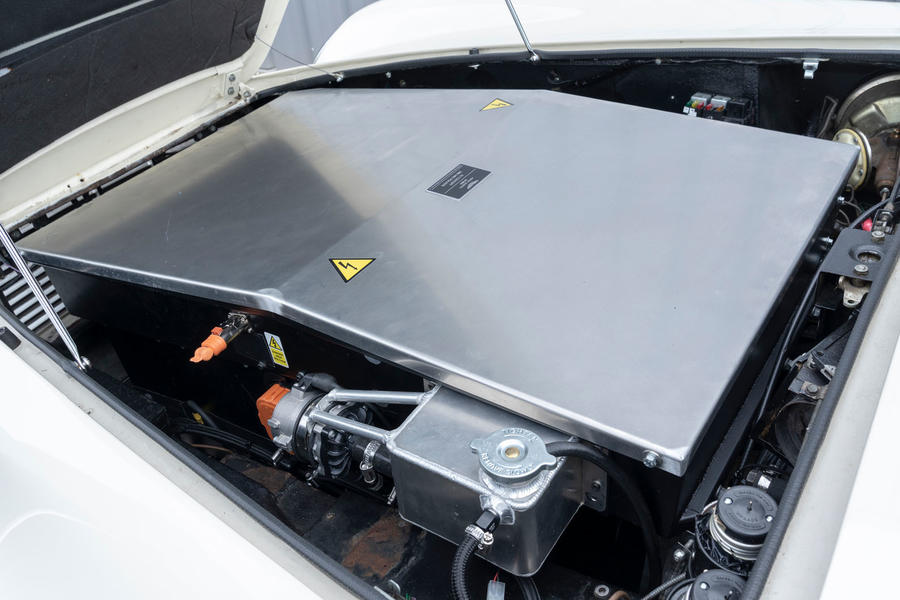 To call the conversion discreet is an understatement. Despite circling the DB6 twice, I can see precisely nothing from the outside to show that it runs on electrons instead of petrol. It even still has exhaust tailpipes, left on to keep it looking as original as possible. Only popping the left-hand fuel filler cap and seeing a charging port reveals the transplant.

It’s the same story in the leather-clad cabin, where the Volante keeps a comprehensive set of chrome-bezelled Smiths instruments, although only the speedometer now works. Spires says a production version would repurpose the other dials for EV-appropriate tasks. The concept also still has the controls for what is now a non-existent heating system. 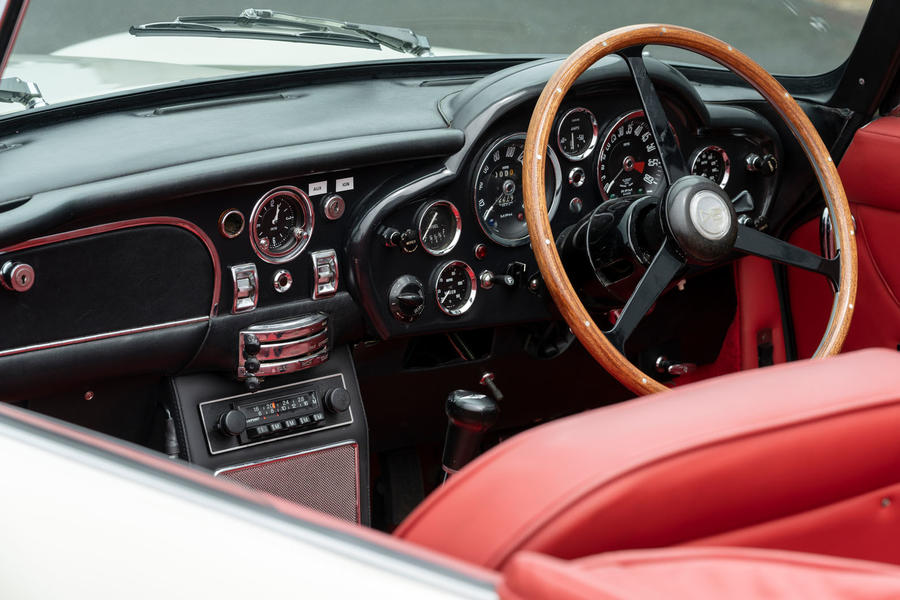 Driving couldn’t be easier. Despite the presence of the manual gearbox, there’s no need to use the clutch to get rolling, or indeed once on the move. Spires tells me to select second and then to treat the car like a single-speed EV. Initial acceleration is less keen than I’m expecting it to be and it takes a good shove on the throttle pedal to deliver an Aston-appropriate level of urge out of the pits. There’s no traction control, but nor does it feel like there needs to be, despite the motor’s ability to produce big torque from standstill.

Once rolling, acceleration continues to build, and by the time the first corner approaches, the Aston is already closing on the 50mph I’ve been told to stay under to keep the powertrain happy. Subjectively, it doesn’t feel as fast as a petrol Aston of the era, but much of that is probably due to the near-total lack of noise, a gentle electric whine replacing the muscular note of the straight six. 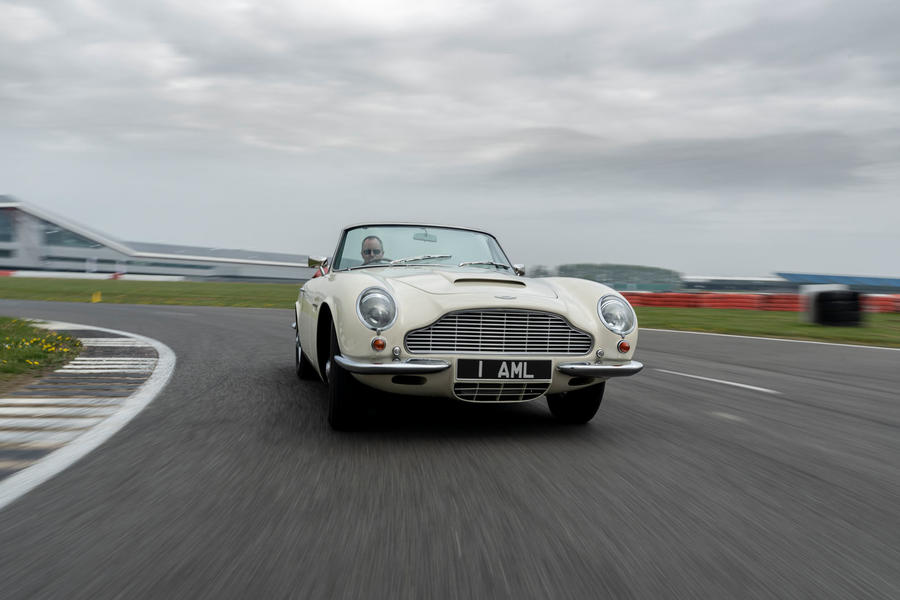 Lifting off proves there is no need to brake, thanks to regeneration powerful enough to make it feel like the track is surfaced with treacle. Spires says the finished version will have less aggressive regen to keep it closer to the driving manners of the original car. Given the novelty of a gearlever, I experiment with shifting ratios to discover there is no point: acceleration feels identical in second and third. As intended, the rest of the dynamic experience is practically unchanged. By modern standards, the DB6 has modest levels of grip and lots of roll, but the chassis is well mannered and it is happy to tackle the short track at a respectably rapid pace. It’s refined, too. There are no creaks or rattles from the trim or the Volante’s elderly structure.

Is it a good idea? Ultimately, that’s for the wider market to decide and Spires admits that a favourable reaction from potential customers will be required to make the business case to invest in a production version. “I’m desperate to do it,” he says. “My feeling is that the pace behind EVs is such that I’d be surprised if we don’t have a proper programme going by this time next year.” 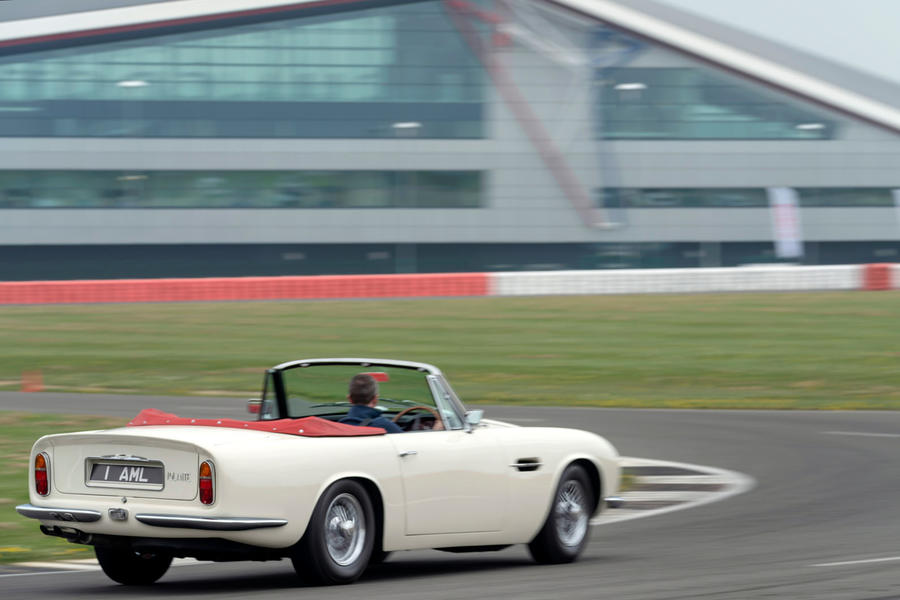 Powertrain will also fit in the DB4, DB5 and DBS

Choosing to make the EV module a replacement for the long-lived DOHC straight six means it can be offered with many cars. Produced between 1958 and 1972, the six-cylinder unit powered the DB4, DB5, DB6 and DBS – a total of around 3000 cars. “We chose that segment because they have a high value and there are lots of them out there,” Spires says.

He estimates that the conversion cost would be around £200,000 before VAT, including the return (or storage) of the original engine.

“If we did 10% of the eligible cars, that would be 300 – more than enough to justify the costs,” Spires says. “I think that is a realistic target given where we are going in terms of social pressure.”

I'm laughing at the bit where Aston state they started work first on their electrification!   Shame the Jaguar of last year looks more finish, more of a completed product.   Early start and still far behind.

Range?   Jaguar are at 200 miles, 150 realistic.   This Aston isn't using the same clever packing of the Jaguar so will have fewer batteries.   I'm going to guess more like 100 miles in the real world.

Do they remove the seats and recover them in plastic to keep the Vegans happy too...oh no wait - plastic is the enemy of the planet too....maybe linen seats then!

To quote anothers facts -Co2 is not the Bogeyman it is made out to be, at 0.04% of the earths atmosphere it is considered a trace gas of which human contribution is actually only about 3%  (or 0.0012% ),  not all of this emissions from cars.

Cars over 40 tears old comprise of 1.3% or 490,000 cars, registered with the DVLA. These cars are used sparingly - mostly weekends and shows, (few cover more than a thousand miles per year)- plus a good number will be off the road in restoration at any given time. Therefore classic cars emissions are literally a drop in the ocean.

Imagine spending a quarter of a mllion to totally ruin the whole driving experience....to survey lifeless dials in the dashboard (other than the speedometer), and hum up the road like an electric golfcart.

Better if your conscience is pricked that much to keep the car in static display and give the quarter million to Cancer research.....or better still, take up collecting Fine Art instead!

Do they remove the seats and recover them in plastic to keep the Vegans happy too...oh no wait - plastic is the enemy of the planet too....maybe linen seats then!

To quote anothers facts -Co2 is not the Bogeyman it is made out to be, at 0.04% of the earths atmosphere it is considered a trace gas of which human contribution is actually only about 3%  (or 0.0012% ),  not all of this emissions from cars.

Cars over 40 tears old comprise of 1.3% or 490,000 cars, registered with the DVLA. These cars are used sparingly - mostly weekends and shows, (few cover more than a thousand miles per year)- plus a good number will be off the road in restoration at any given time. Therefore classic cars emissions are literally a drop in the ocean.

Imagine spending a quarter of a mllion to totally ruin the whole driving experience....to survey lifeless dials in the dashboard (other than the speedometer), and hum up the road like an electric golfcart.

Better if your conscience is pricked that much to keep the car in static display and give the quarter million to Cancer research.....or better still, take up collecting Fine Art instead!

I couldn't agree more. This Spires chap sounds as if he's been brain-washed.Techies moveing "en mass" to EV's - what? No-one is buying them and sales are falling whenever the govt subsidies are reduced. The idea of making the instruments fulfil electric powered tasks is risible. There's no range, it can only be driven at below 50mph, none of the tech would make it to market. So what's the point. Sounds like ideologically driven drivel to me. Come back to us when you've done the job properly Spires.

The article mentions that there is no heater. Is this the case for all conversions to electric? It severely limits when you can use the car, particularly for a convertible.

I am more concerned that my eagle eyes note that they used a DB6 Vantage for the conversion.   There can only be a dozen or so of these convertibles to Vantage spec still in existence and it should have remained in original condition.   I speak as one who in the 70's owned a DB5 Vantage Convertible.   How I miss her!

Isn't part of the charm of owning a beautiful car such as this the sounds, smells and feel of the old engine. It's never going to be a daily driver; it's a classic car. The reason we love them is because they're 'old'.

Why ruin one by replacing a lot of what makes it 'it'? I don't get it at all. New EV's sure. Ripping apart old classics for no particular reason? Pass.

Great idea!  Also, let's replace the roof of Nôtre Dame with a structure of solar panels, and instead of rebuilding the spire they could install a wind turbine!

There's something perverse about a manufacturer that thinks it's a good idea to ruin one of its own now relatively rare classic cars in an attempt to pander to a misguided obsession to rid the world of any petrol-powered vehicle. As 289 points out, classic cars account for so few emissions overall, they are of no real significance.

Although it's hard to admit it, Paul Spires is right

What if, 25 years from now, combustion engines are banned from the road? What will we do with our cars? I think that Paul Spires is right, the "transplant" idea is good and will keep the cars on the road for another 100 years at least. There's no shame in it, it's just accepting the future and creating products which future generations can enjoy.