BACK TO ALL NEWS
Currently reading: Bumped off: turning a Land Rover Defender into a hearse
UP NEXT
MST Mk1: Is this the ultimate rally recreation?

Bumped off: turning a Land Rover Defender into a hearse

"He was always in his Land Rover – he’d never have wanted to arrive in a Volvo.”

It’s a line the car maker could consider for an advertisement featuring a chisel-jawed adventurer fording a river in his all-new Defender on his way, perhaps, to a black-tie dinner in the jungle but for the fact that the words were spoken by a mourner at a recent funeral, overcome by the sight of a Defender-based hearse.

“The family were absolutely stoked,” says Jacqui Whinnett, founder of Alpha 4x4 Funerals that provided the vehicle. “The order of service carried a picture of the deceased driving his Landie; that’s how much he loved it.”

Who on earth, and in heaven, requests to be taken on their final journey in a Defender, I ask her: “Lots of people. Land Rover enthusiasts, of course, but also free spirits, adventurers… I recently did a funeral for a young chap who’d done a lot of travelling and who had planned to buy a Land Rover. Another organised illegal raves and the floral tributes were stuffed with marijuana leaves.

“Farmers like to go in a Land Rover, too. Only a few weeks ago, in the Cotswolds, I drove one to the top of a field overlooking his farm to be buried. His relatives said it was so he could keep an eye on everyone.”

Forget images of a smoky old Landie chugging up a boggy field with a coffin poking perilously out of the back. Whinnett’s Defender would do a royal funeral justice (she’d love to do one of those, too). It’s a 130 she bought in 2003 and had converted by Foley specialist vehicles.

“It’s an ex-army vehicle that used to tow Rapier missiles,” she says. “Being a 130 it’ll take a coffin lengthways, where a competitor who runs a Defender 110 has to squeeze it in diagonally.” 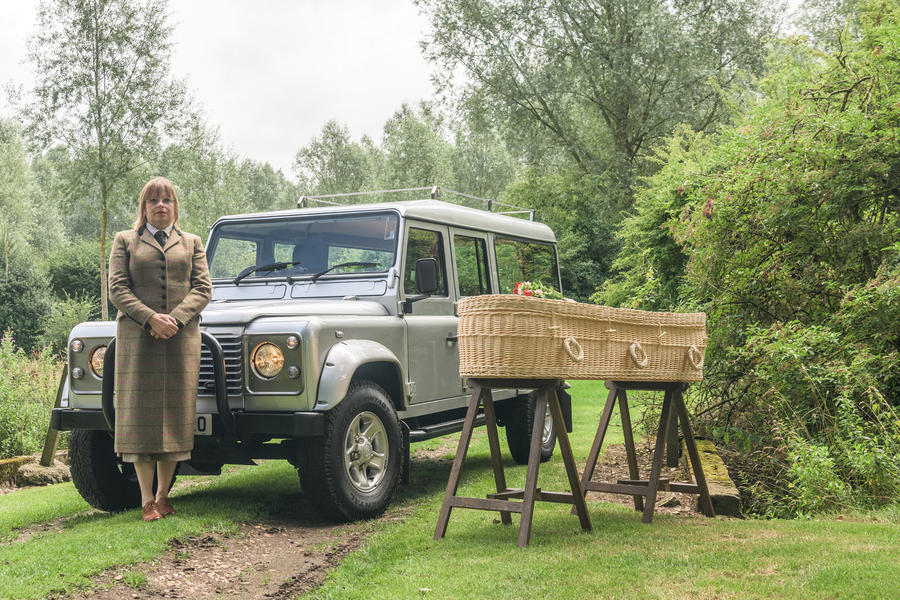 Foley has done a great job of Whinnett’s Defender hearse, the highlight being a rear deck finished in polished walnut and with storage beneath for cleaning materials and lowering straps. The company also resprayed it in uplifting Zambezi silver and fitted black leather seats. Over the years, Whinnett has fitted alloy vent flap controls, steps and hinges, and had a replacement 300 TDi engine fitted (the original motor was a petrol V8).

Parked in the sun-dappled glade we’ve chosen for our pictures and with a woven willow coffin (the Cromer model, courtesy of Kentbased Ecoffins) on board, this 26-year-old Defender hearse looks a real eyeful. Indeed, as Whinnett deftly manoeuvres it on the uneven ground, it’s easy to see why it makes such good business sense.

“I’ve been down rutted tracks in this,” she says, “but can you imagine driving a traditional hearse over a field? Ripping the catalytic converter off a Daimler would take all the profit out of the job.”

Where did she get the idea for a 4x4 hearse from? In fact, it came to her when she was seriously ill. “I’d developed cancer and during my treatment had time to think about the future, if I had one,” she says. “I had been a funeral director and had seen how people were wanting to put their own stamp on their funerals. I’d been around Land Rovers for a long time (my dad once took us kids to Woburn Safari Park in his Series 2 and the monkeys virtually stripped it) and the idea came to me that one would make a quirky way to go to your final resting place.”

That was in 2003 and by 2004 Whinnett had her Defender hearse which she displayed at a local Land Rover show. The reaction was positive and slowly the business grew. Today, she drives her Defender to around three funerals a week, all over the UK. Shortly before we met, she’d taken people to final resting places in Corby, Torquay and Farnborough. 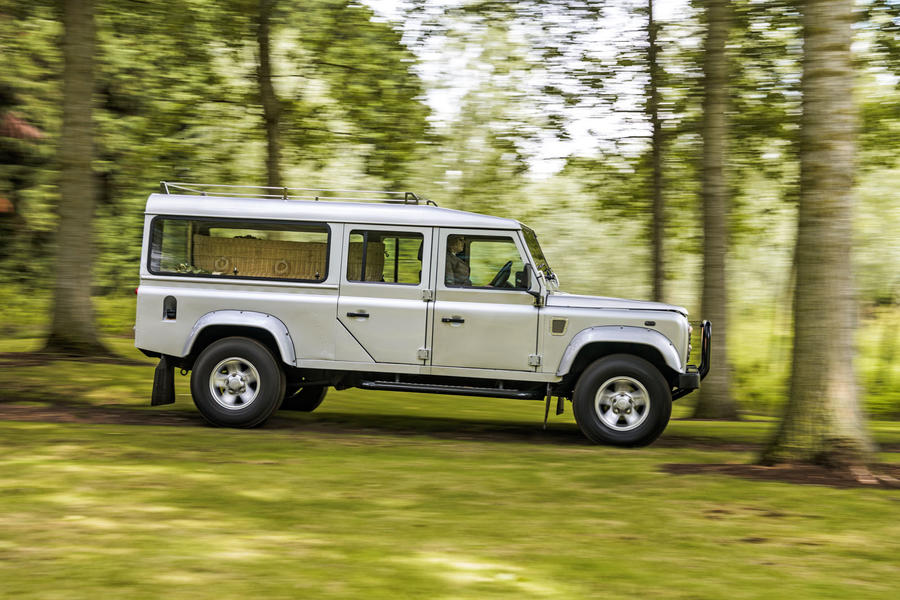 However, while I don’t doubt her Defender can get its passenger to the most inaccessible locations, how reliable is it on the way to them? “Apart from the time a headlight switch failed and a new gearbox broke, it’s been perfect – touch wood,” she replies.

Like all good business people, Whinnett is constantly thinking of new ways to cater for her customers. The latest is a Series 1 hearse with an open deck that’s she’s readying for the fleet. However, it has a top speed of only 40mph – good for the cortège but not when you’re faced with a 200-mile drive to join it. No problem: ever the pragmatist, she’s buying a 7.5-tonne flatbed truck to transport the vehicle.

It sounds like a great idea but there’s no doubt the 130 is a more impressive piece of kit and just the job when things get a bit emotional. Like, for example, the time Whinnett drove it at a biker’s funeral and things quickly got out of hand…

“There were bikers doing wheelies all around me. It was like something out of a Mad Max film. The vicar had set up a boom box outside the church and the atmosphere went even crazier. “Then the police arrived to calm things down, triggering a mass exodus of law-breaking mourners.

On the way to the crematorium, I drove over loads of remote stingers put down by the police. Still, I got off lightly; the police cars were trashed.” I wonder if Land Rover’s marketing team could do something with that? 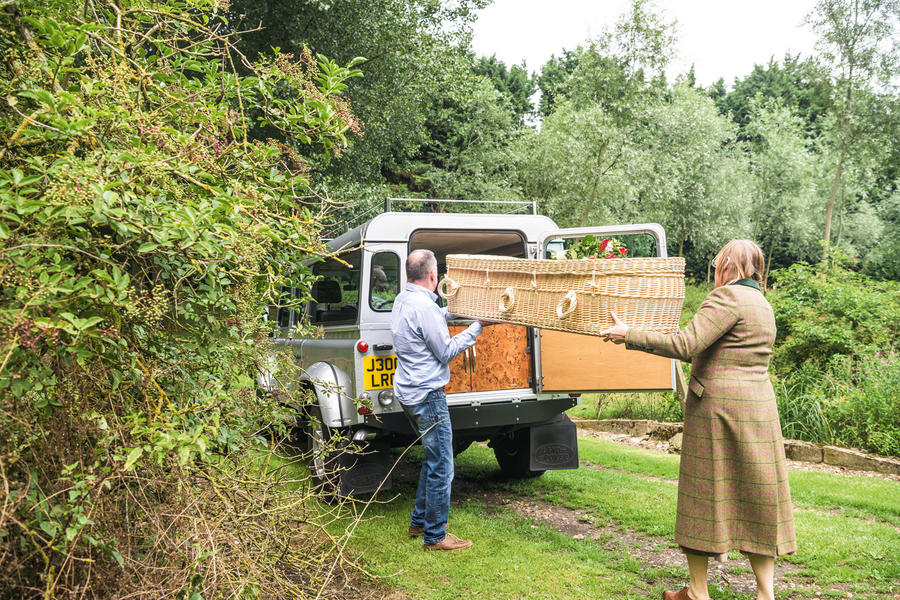 GOING OUT IN STYLE

If you or a loved one don’t like Land Rovers, don’t worry, there are plenty of other companies offering imaginative solutions for that final drive.

Opinion: What a Defender owner thinks of the new Defender

Let's all pray that LR itself doesn't end up in one of them...

Turning up with the obligatory 3 sheep in the back too.   Cremation and then everyone eats roast lamb at the wake !   Sorted !