BACK TO ALL NEWS
Currently reading: Britain's Best Driver's Car 2020: And the winner is...
UP NEXT
Alfa Romeo to show new sports car in early 2023

The Ariel Atom 4 returns to defeat this year's new arrivals by the slimmest of margins. Our judges explain what makes it – and the affordability hero Yaris – so special
Open gallery
Close

Five judges, each with 50 points to distribute per car, and we still end up with a two-way tie. But on countback and by dint of two versus one first places awarded, the Atom becomes one of those rare cars that successfully defends its winner’s position at Britain’s Best Driver’s Car.

Frankel said: “It would be hard to overstate my admiration for this car. The way the Atom 4 dealt with the conditions was one of the most impressive things I have ever witnessed in three decades of Handling Days.”

It was a recurrent theme. We all thought that an Atom would mate less well with late October than vehicles with a roof, or at least a heater, or perhaps bodywork, but none of it. “Another lightweight might have been the spikiest thing in the pit lane,” said Saunders.

But with its dampers slackened a little – which doesn’t even require a spanner – the Atom was a treat to drive in any weather, gliding bumps, communicating brilliantly and finding unexpected reserves of composure and ability. A truly immersive experience at any speed but, on circuit, capable of a surprising turn of speed with tremendous docility.

Disdale summed it up nicely: “I loved the fact that it was an almost totally analogue experience. You get out exactly what you put in. On the road, it’s a thrill at any speed.”

And ultimately, for me, that’s what separates the Atom from the rest. Matt Prior 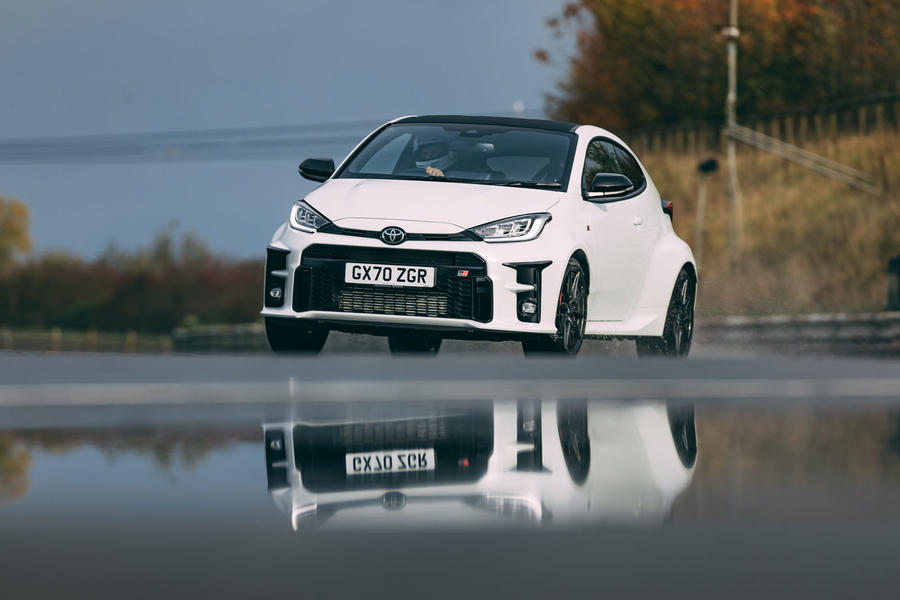 Only one car really surprised anyone at Handling Day this year, either on the windy moors of south-west England or in the dripping-wet confines of Castle Combe. Others certainly delighted, excited, flattered and frazzled. But only the brilliant GR Yaris suddenly hit the big time.

Coming from nowhere, this little Toyota demonstrated an eerie command of the essentials of a really great all-weather any-condition fast road car. Compactness, responsiveness and drivability. Unbreachable and dependable traction. The suppleness, stability and sure-footedness to deal with adverse surfaces and unexpected situations around the next hedge. And a total, almost piscine suitability to rain and standing water. The ability – so rare among modern hot hatchbacks that run offset front contact patches and lots of scrub radius – to hit a puddle without steering to either side at all. It was all quite something to witness and somehow, even from one of the most hotly anticipated affordable performance cars of the year, nobody was quite prepared for it

In a wringing-wet BBDC contest, it would have been a crying shame to have been denied even a single car that felt like it had come ready for the weather; but, if not for this Toyota, we might have been. We live, after all, on an island with a climate dependable for its dampness, but in times where that breed of Tarmac-clawing, all-paw driver’s car is fading into obscurity.

So many performance car brands now want to sell us launch control, Cup tyres and Nordschleife lap times that we’ve forgotten what a truly purposeful, wonderfully naughty fast road car feels like – and how compelling it can be. The GR Yaris is a supremely timely and very welcome reminder, and if Toyota can only follow it up, it could be a new power in the affordable performance car market before you know it. Matt Saunders