BACK TO ALL NEWS
Currently reading: Britain's Best Driver's Car 2020: The main event
UP NEXT
Spending 48 hours touring in a Ferrari Roma

Being able to look back twice as far as any other judge, I can say with confidence that this, the 32nd Britain’s Best Driver’s Car (BBDC) event, was the toughest yet.

Everything was against our doughty troupe of contenders. Of all British tracks, Castle Combe and its notorious bumps present the greatest challenge for a road car, and that’s when it’s dry. When wet, bring your A-game or stay home. When damp, wet, with hints of a dry line and flooded all at the same time depending on where you are, it’s a bloody nightmare.

The route from Combe across to quick and open roads around Wantage and Lambourn was easier for the drivers perhaps, but just as likely to expose the frailties of the cars. And then there was the time, or lack thereof. Short days, time spent sanitising cars, and periods when the track was too wet to learn anything other than how to have a pointless accident left no time for car or driver to warm up. If a car did not make you feel at once and entirely at home, that alone would rule it out of contention: there was no time for excuses.

Yet despite it all, perhaps the most remarkable fact about BBDC 2020 is that no car came up short. Usually, we’ll have invited something that turns out to be better on paper than in practice, and occasionally we’ve been left wondering why we bothered. But not this year. 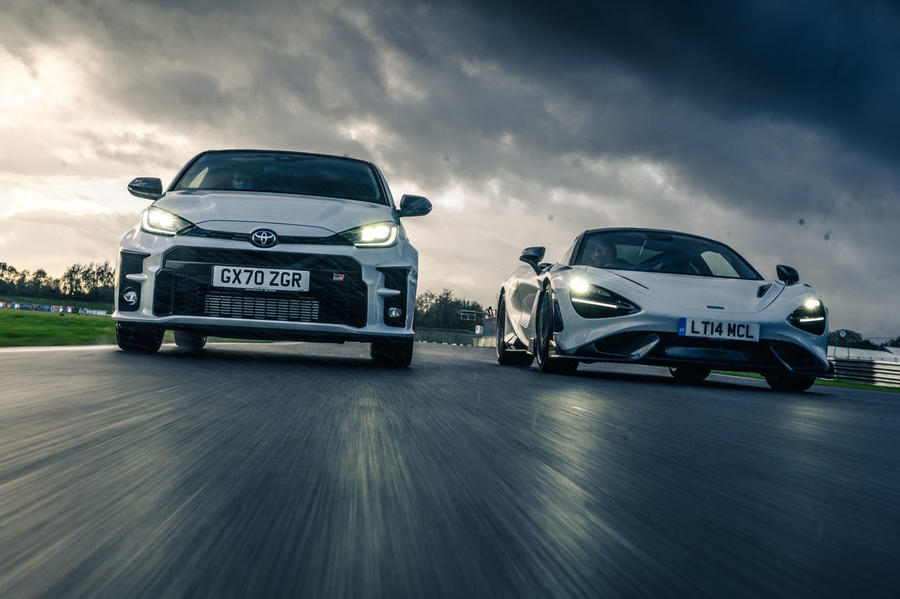 So we’ll start with the car that’s already won, the Toyota GR Yaris, fresh from victory in our quest to find Britain’s best affordable driver’s car. Would it be cowed by uniformly more powerful and expensive rivals now it had earned the right to a seat on the top table? What do you think? As road test editor Matt Saunders put it: “It had the compliance, traction, stability and compactness to devour those slippery road surfaces.” At Combe, Saunders found himself actively seeking out the standing water, to see how it would cope. It did so magnificently. “I’d have taken five laps in this over 50 in some of the others” was his final comment. Was it lucky the conditions played to its inherent strengths? Possibly. Would it have done so well on a smooth, bone-dry track? Probably not, but you play the hand you’ve been dealt and it did so quite brilliantly.

Next up is another outlier, the Porsche Taycan. Some judges didn’t even think it should be here, myself included. What business could a four-door electric car weighing 2300kg have amid such company, and what prospects were there for it to do anything other than come unstuck? Well, I got that wrong. As special correspondent James Disdale put it: “Regardless of its power source, this feels like a Porsche, from the weighting of its controls to the way it responds to your inputs. Acceleration and traction are remarkable, the fine control of its motors allowing it to conjure grip on the most unhelpful of surfaces.”

It was profoundly impressive to see the Taycan not so much drive as bludgeon its way through the weather and around the circuit, finding purchase where logic told you there should be none. Editor-at-large Matt Prior observed it could do “odd things when you go from acceleration to braking on track”. But if the Taycan had an issue, it was that expressed by road tester Simon Davis: “The speed and agility are great, but once you look past the insane engineering that enables them, there’s not much else that excites me.” 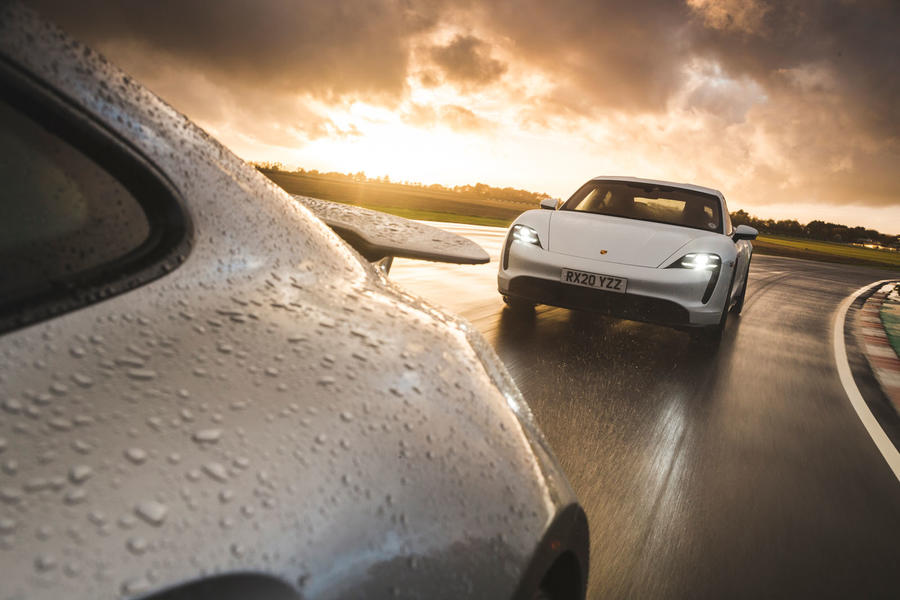 As for the more conventional Porsche in our midst, when I saw the weather forecast I was moved to call Saunders and suggest in jest that we should give the award to the 911 Turbo S and stay home. In the event, it didn’t quite turn out like that but, even so, its ability to deploy what felt like limitless torque through the medium of its four-wheel-drive hardware and the traction benefit of having that motor slung over the rear wheels provided a formidably high bar for the others to vault.

At times, it felt almost like too much. Prior: “On the road, it feels like being let into a fully equipped stainless-steel restaurant kitchen, but being restricted to using the microwave to defrost some peas.” On the track, however, more than one of us saw the conditions and headed for the 911 first. It says plenty about the car that we’d choose a 641bhp 911 essentially as our circuit familiarisation vehicle. As Saunders put it: “It tore around in the heavy rain, finding grip and stability almost everywhere, communicating its limits clearly and remaining controllable, engaging and progressive on track, even in treacherous conditions.” And Disdale was not alone in noting that “the worse the weather became, the more your confidence in the car grew”. And yet for all the admiration in our notes, there was little sign of love. As Prior put it: “It didn’t excite me and I think it’d be the 911 I’d be least likely to buy.”

It was, in many ways, the polar opposite approach to that taken by the rear-drive Lamborghini Huracán Evo. It’s stunning it’s here at all, given the pasting its four-wheel-drive sibling received at this event last year, but not one of us regretted its inclusion. Davis: “After last year’s disappointment, the rear-drive Huracán has redeemed things for Sant’Agata. From its steering, to its balance, to its front-end response, it feels more intuitive and predictable than its four-pawed sibling.” It wasn’t a hard car to criticise, though, because of its poor visibility, driving position and ergonomics. Also, its damping was streets behind that of the McLaren 765LT – and, for that matter, the Ferrari F8 Tributo, which made the cut for this shootout and appears in our photos but was withdrawn with mechanical issues before all of our judges could drive it. 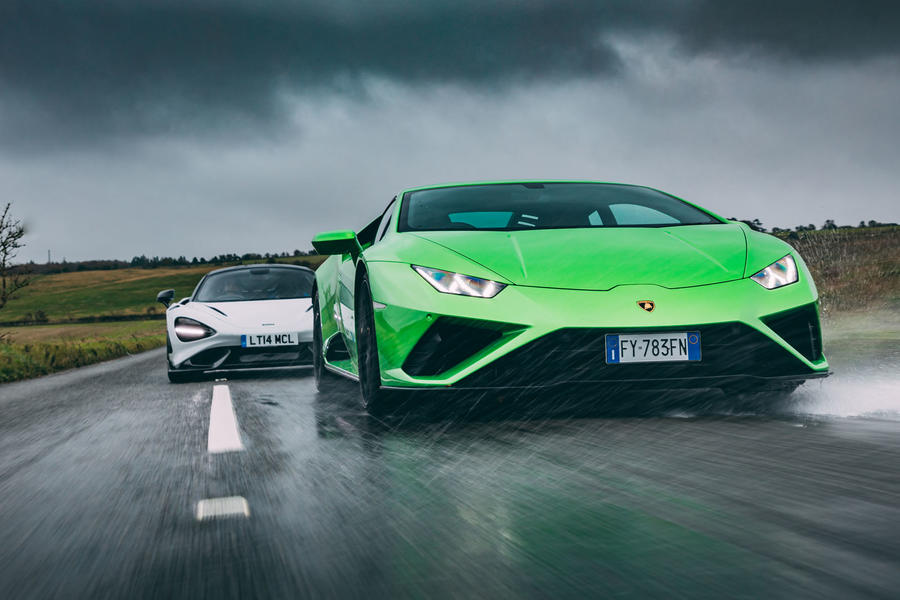 The Huracán’s damping led to uneven progress on the road and interesting reactions to Combe’s many bumps, but the car also showed that back-to-basics charm still gets you a long way in this game. As Disdale pointed out, had it had the damping from the Performante, it could have really worried the front runners here.

Which is not something anyone said about the Aston Martin Vantage Roadster. The surprise was that a couple of testers (Disdale and me) preferred it on track to road. Everyone enjoyed its languid nature and an AMG-supplied powertrain that feels more Aston Martin than some of its own. As Prior observed: “Once you get in the (five- to six-tenths) groove, there’s fun to be had. The engine is great, delivering deep-chested torque but with a barking rush for the redline. Meaty steering and a strong front end help, too, allowing you to place the car just so – crucial, given it’s a big old bus.” But beyond that effort level, the limitations of its convertible structure come into play, the ride deteriorates and its size and mass become increasingly evident.

On the wet track, however, the fact that there’s some structural give and a bit of heft actually help, even if Saunders felt its e-diff tricky to read at times. We suspect a manual Vantage Coupé with a conventional locking differential could have done far better.

There was another that had us wondering whether we’d brought the right version. We like the BMW M2 CS, but the suspicion that the cheaper M2 Competition would have done as well and possibly better was never far away. To be fair, the CS was sizeably undone by standard Michelin Pilot Sport Cup 2 rubber with very limited wet weather performance; were the car available on the 4S, things could have turned out differently. As it was, Saunders called its grip “brittle and duplicitous” and I think the rest of us would have to travel some distance to beat that. Both he and Disdale saw flashes of what might have been when the track dried enough for a merely damp line emerge, but the “slithering from understeer to snappy oversteer” noted by Disdale was a trait we all recognised, as was the “head-banging” intervention of the traction control. 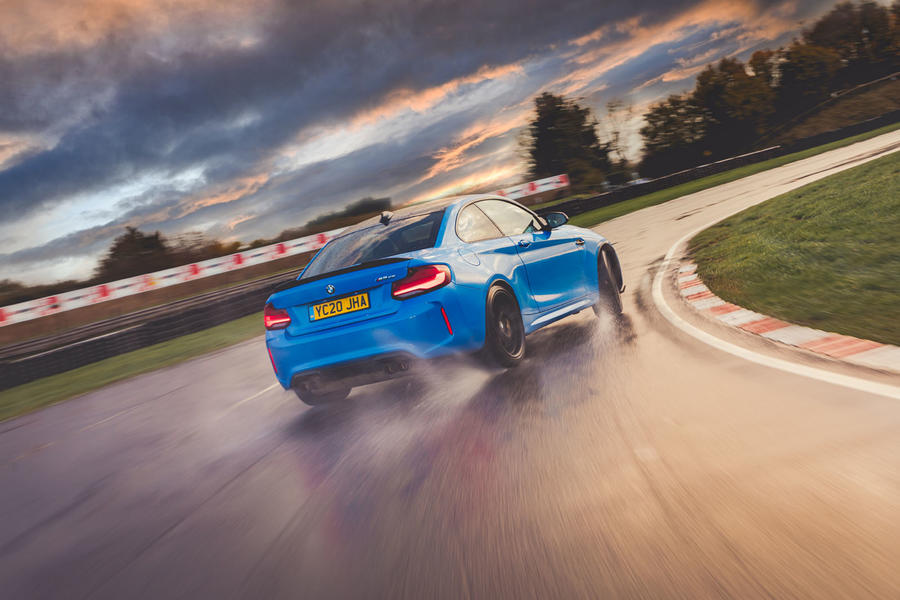 Which leaves just two cars, one of which is our returning champion, the Ariel Atom 4. For the skeletal sports car, a moment of truth. You could argue that last year’s smooth dry roads of Snowdonia and Anglesey Circuit played to its strengths. Well, Combe and the Cotswolds would even that out. Anyone getting into the Atom on road or track knew they’d be getting out wet and cold. If it could overcome that, that would be something because it looked near enough the last car you’d want to drive in such weather.

Not so. Saunders: “Another lightweight might have been the spikiest, worst-balanced and traction-limited thing in the pit lane, but the Atom was none of the above.” Prior: “I feared I’d end up too cold, wet and miserable. I was wrong. I was cold, wet and joyful.” Disdale: “The weather should have played against a very fast kid’s climbing frame, but it simply enhanced its appeal, putting you closer to your surroundings for a totally immersive driving experience.” Davis: “It’s a reminder of how wonderful simplicity can be. It feels so superbly light and agile, with feelsome steering and perfectly weighted controls.”

As for me, I was floored by its ability to find grip and inspire confidence. It was pulling way past 130mph approaching the notorious rise before Quarry bend, yet it would flick deftly left over the streaming track, allow you to nail the brakes, shed a gear or two, dive into the right-hand turn and slither away from the apex. If we’d not all experienced it, we’d have had trouble believing it. 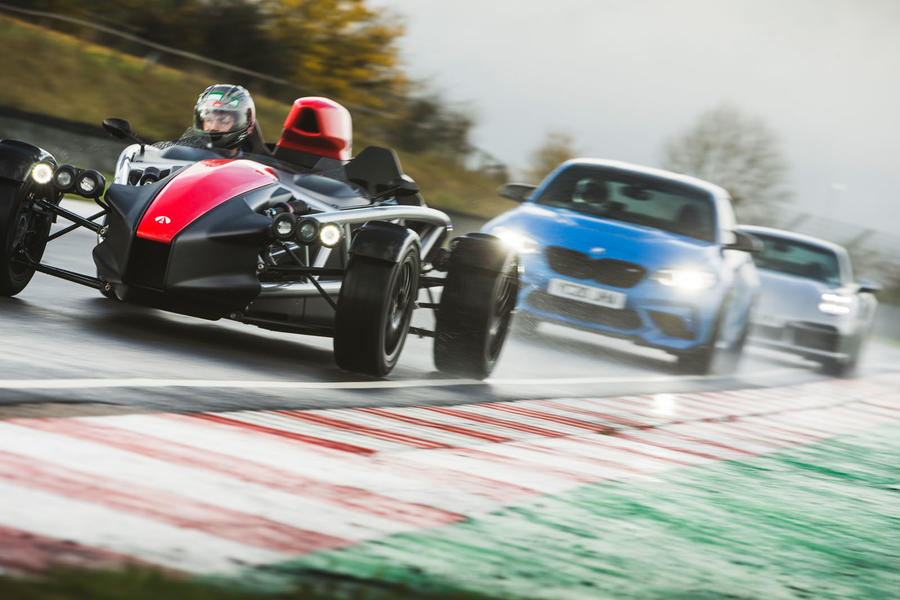 Which just leaves the 765LT, the most powerful car ever to attend this event, and I’d be lying if I said the prospect of driving a car predominately intended for dry race tracks didn’t make us pause as the rain belted down. Yet it defied expectations.

At the most basic level, the fact that you can see out so well is crucial, as is, on the road, its fine ride quality. It builds the confidence without which any such car would be at best horrid, at worst a menace. Yet Disdale called it “shockingly good on the road. It should have been terrifying but felt alive and on your side.” Davis found it a terrific car to drive at “social” speeds because its controls “are so wonderfully communicative”.

And that’s the thing with this latest LT: through the finest power-assisted rack and feedback of the chassis, you felt fully informed and in charge, despite the devastating firepower at your disposal. The only bone of contention was its limit handling. Disdale thought it “sublime” and Saunders observed “I like how the stability systems let you play with its handling at the limit and give an extra dimension of appeal, without needing to be fully deactivated” while I found it far more reassuring to slide about than most, but Prior still found the “lag-to-ohmygawd oversteer still there on track”. There’s no easy explanation for such a divergence of opinion, other than it seems the LT reacts better to some driving styles than others.

So eight cars, and eight performances from the merely interesting to the genuinely extraordinary. But we need a top three and, most of all, a winner. Over to you, Mr Road Test Editor…

Has to be the GR Yaris