BACK TO ALL NEWS
Currently reading: Brighton sparks: From London to the coast with 70 electric cars
UP NEXT
Kia EV6 named 2022 What Car? Car of the Year

Brighton sparks: From London to the coast with 70 electric cars

Who would want to embark on a rally at 7am on a Saturday to promote electric vehicles? We join the armada in a Renault Zoe to find out
Open gallery
Close

You know it’s going to be a road rally with a difference when the car in front is an orange Bond Bug from which a cheery hand waves an unabashed greeting. It turns out that it (the hand as well as the Bug) belongs to Roy Campbell, an electronics wizard who has converted the 1970s three-wheeler into an EV with the assistance of a couple of Tesla battery modules and a motor making 50bhp – enough to propel all 400kg at a fair old lick for 80 miles.

Campbell has sunk around £30,000 into the conversion, but it’s not just an idle project. Instead, he has designed an evolutionary new body – described as “beautiful” by Tom Karen, who designed the original – and plans to sell new electric Bugs based on the existing three-wheel chassis design. 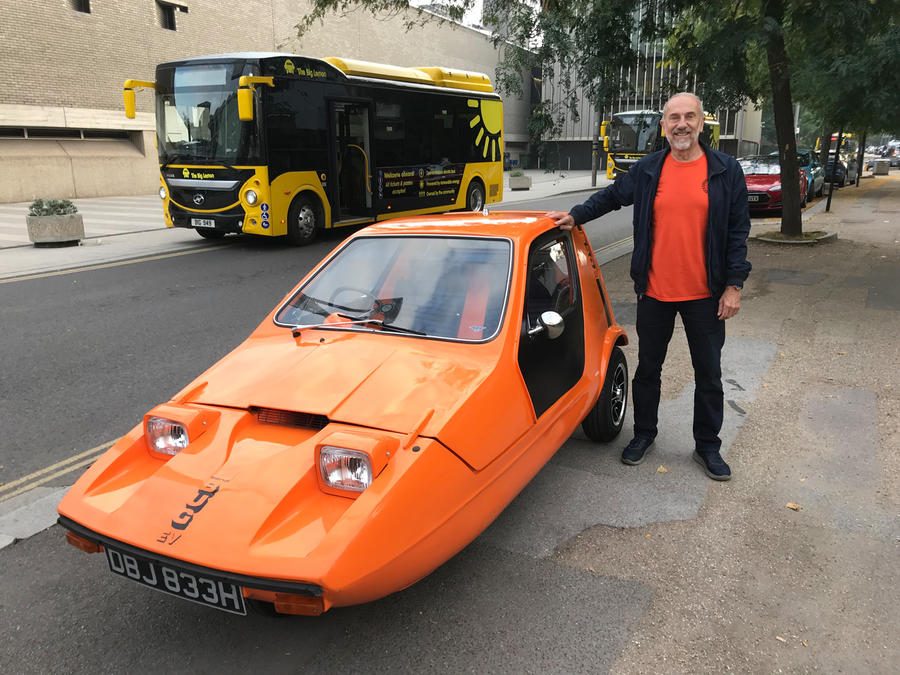 Along with 70 other electric car, van and motorcycle owners and operators, Campbell is on the inaugural London to Brighton Electric Vehicle Rally.

I’m on it too, driving a borrowed Renault Zoe R135 ZE 50 GT Line. I’m only observing but am keen to meet the other runners. I don’t have to look far. All participating EVs, arranged by vehicle category, are to be inposition near the National Theatre on the South Bank for the 7.30am rolling start. It’s 7am, so there’s time after chatting to Campbell to find out who that gentleman is with his tuk-tuk.

Steve Webb of Tukshop.com saw his first one on holiday in India in 2002 and has since imported 300 of the tiny passenger vehicles to the UK. He’s now on a mission to electrify the vehicles with the help of Oxford based Saietta, leaders in axial-flux motor technology. His electric tuk-tuk has a range of 80 miles, and he’s about to start operating a fleet of them as taxis in Newquay. 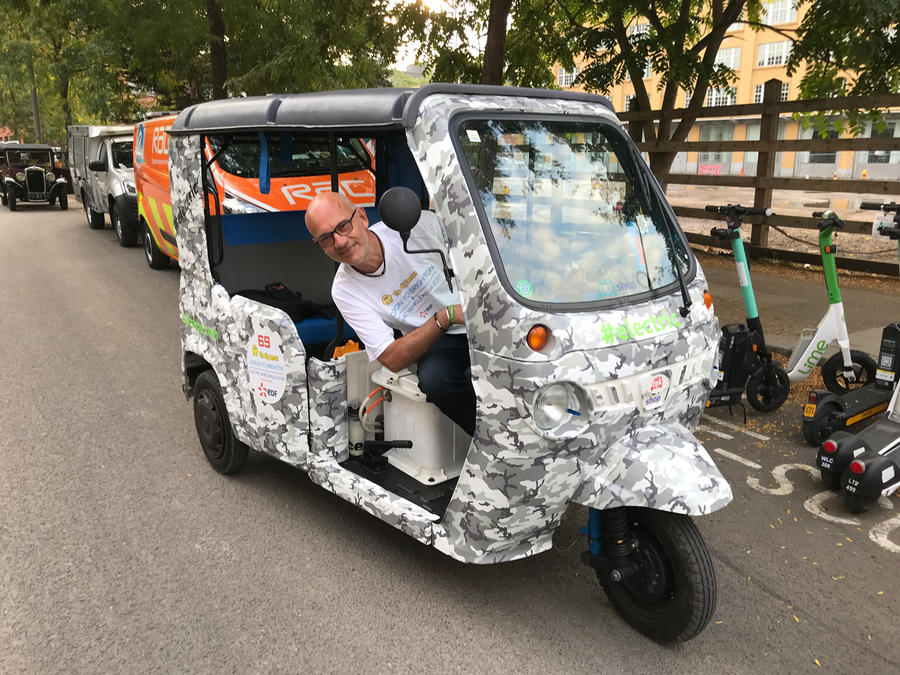 Saietta: I know that name. A few vehicles further up the line, I spot a gentleman standing in bare feet and tinkering with an enclosed motorcycle. It’s Cedric Lynch, inventor of the Lynch Motor, precursor of the Agni Motor that’s now manufactured by Saietta and which powers Webb’s tuk-tuks. Small world. Lynch is keen to show me his electric motorcycle, which he built in 1991. It has a range of 500 miles at a steady 60mphcruise. I’m worried about his feet.

Making my way past the growing numbers of Teslas and Zoes, I arrive at the commercial vehicles. Natalie Hayes springs from one of them to tell me how she and her husband Tony (the managing director of JLCGroup, which makes everything from airside equipment for airports to EVs) are researching and building a modular electric van with a one tonne payload. Their day is about helping to raise awareness of it and its potential as they embark on a £750,000 seed-funding campaign.

I should return to my Zoe. I pass a Skoda Citigo-e iV – “one of only  400”, its owners, Emma and Tim Sherrington, tell me proudly. “I never cared about cars until we bought the Citigo,” says Emma. “For us, today is about promoting EVs. Everyone should own one!”

Charles Henderson, owner of the MG 5 SW EV estate ahead of her, agrees. The photographer has done 12,500 miles in it in just six months and reckons he has saved £1000 in fuel. “It has a 200-mile range, but I’ve never found charging at public chargers a problem,” he says.

Although I wouldn’t expect anyone who can be bothered to turn up at 7am in central London to drive their EV to Brighton to be anything but passionate about the technology, I’m struck by their excitement andcommitment. As I press my Zoe’s starter button to begin our electric odyssey, I’m beginning to share it. 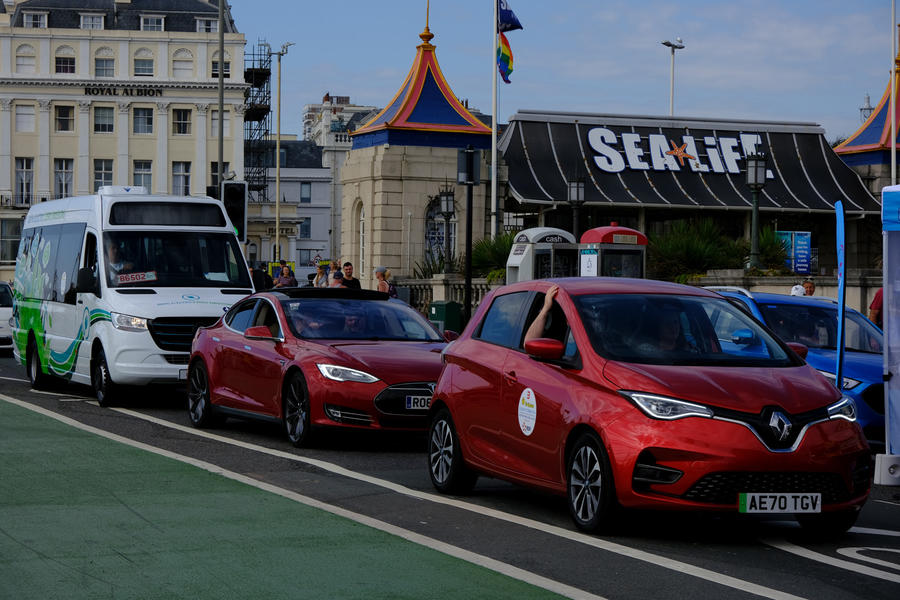 Unfortunately, by the time we enter Parliament Square and hum back across Westminster Bridge for the classic photo-op, the convoy is already in disarray, fractured by the endless traffic lights. I sense that, likeme, many of the drivers haven’t bothered to study the route, choosing to rely instead on the EV in front knowing which way to go.

Some miles later in deepest Streatham, the confidently driven Tesla Model X that I’ve been following takes an odd turn and disappears. I pull over and realise I must head to a checkpoint near Dorking. It’s abit of a faff, and by the time I get there it occurs to me that I should hasten to Brighton via the M23 to see the stragglers in.

As it turns out, I’m the first to arrive at Madeira Drive. The trade stands are ready and curious passersby are lining the seafront promenade hoping to see something – anything. I park up and head for the chapin the bright-yellow suit who I had spotted near the matching buses. It’s Tom Druitt, who in 2007 founded Brighton’s Big Lemon bus company, organiser of today’s drive. It has been moving to green energy andtoday’s event will publicise the arrival of its latest Higer electric buses from China.

A few minutes later, the first of the bona fide rallyists arrives, not surprisingly in a Tesla Model S P100D. This is Andrew and Caroline Garnett’s second Model S. The couple clocked in at all four checkpointsand even had time for breakfast. “I love the Model S,” says Andrew. “We drove from home in Hemel Hempstead to London, then to here, and then we will drive back to Hemel, all on one charge.”

This saloon isn’t all about saving the planet, though. It’s fitted with Ludicrous mode, and every other week Andrew takes it to Santa Pod Raceway to drag-race American muscle cars. “I’ve got the quartermile sprint down to 11.07sec and an average speed of 119mph,” he says. “I’m around mid-table. I’m there a couple of times a month and the car has never missed a beat.” 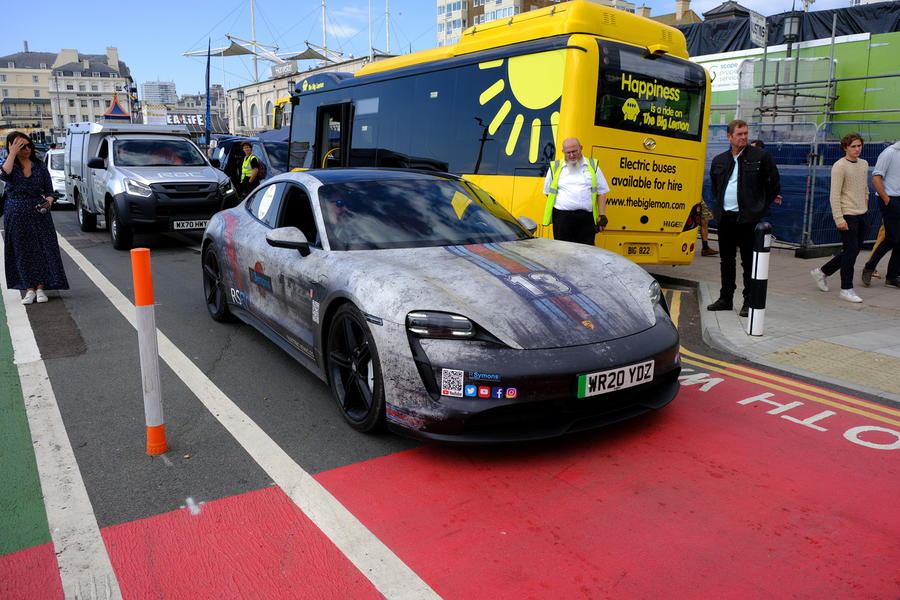 More rallyists now begin arriving, among them Lynch, who at the last second steadies his bike with two bare feet. He’s followed by Campbell in the Bug (“the route was a bit confusing”) and a vibrant-blue FordMustang Mach-E driven, it turns out, by Steve Forster of Osprey Charging, a company that builds what it claims are easily accessible charging points dispensing renewable energy.

“I’ve owned most EVs and have a Mustang Mach-E GT on order,” he says. But the former IT tycoon is a petrolhead, too, with a Jaguar XJ220 and a new Porsche 911 GT2 RS in his collection. “EV enthusiast and petrolhead: you can be both,” he tells me, reassuringly.

Jeez, cant think of anything worse, than being surrounded by a bunch of EV evangelists, all banging on about how much they love their milk carts!