BACK TO ALL NEWS
Currently reading: Back to the future: Driving the first ever rechargeable EV
UP NEXT
First drive: 2022 BMW XM prototype

Back to the future: Driving the first ever rechargeable EV

The very first rechargeable EV was made by Gustave Trouvé all the way back in 1881. We have a replica built to recreate the 140th anniversary of its maiden drive
Open gallery
Close

None of us who have driven it have been brave enough to take the replica of an 1881 Trouvé electric vehicle to its limit. Little wonder: it has a tiller to steer two of its three thin solid-rubbered wheels, a brake made from a strop of leather, a seat that puts your backside at shoulder height and a motor that might as well have a light switch for a throttle.

This important evolution in the history of electric motoring is up there with Icarus’s wax wings in terms of its safety rating. Gustave Trouvé cared not. By marrying a Coventry-made tricycle with his battery and motor combination, the Frenchman created what is considered to be the first rechargeable EV.

On 19 April 1881, at a time when the American west was still wild, the First Boer War was just ending and Queen Victoria still had two decades left on the throne, Trouvé took to the Rue de Valois in Paris. He thrilled, scared, bemused and amazed a crowd of onlookers; a contemporary illustration shows a dog chasing him on his tricycle.

“Those Parisians surely must have assumed that they had seen the devil go by,” says one of their descendents, Patrick Chargueron. “I never imagined something like this already worked on electricity in 1881; I would have said 1900 or 1910.”

His surprise is common. Most people don’t realise that, years before the internal combustion engine was invented, electricity was propelling people on streets around the world. Plus ça change. 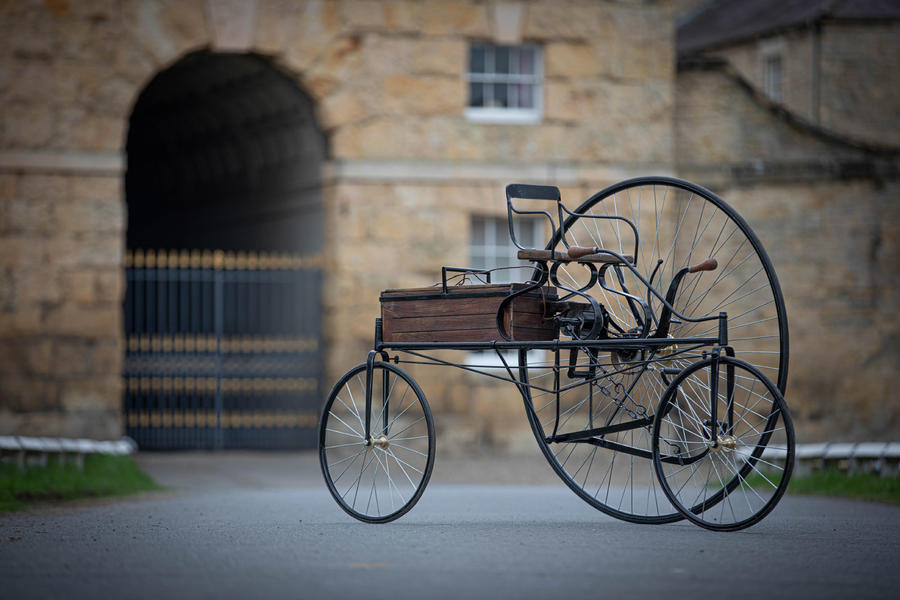 “When Trouvé combined an electric motor, a rechargeable battery and a cycle very similar to this one, it was one of the earliest [self-propelled] vehicles to be seen on the roads,” says Catherine Griffin, curator of the British Motor Museum at Gaydon. “It’s really interesting to look at the history of EVs and to understand that, as we see them now, they aren’t a modern technology.

“Back in the 1800s, electric drive was really widely adopted and had exactly the same benefits that it does now: it was cleaner and quieter. And those who didn’t adopt them did so for the same reasons that people don’t now, in terms of range and reliability.

“As roads became better and cities were more connected, the range of the EVs meant that it just wasn’t as easy to get to these different places. And then the price of petrol also dropped quite a lot, which meant it was a lot cheaper to mass produce the internal combustion engine car.”

Not just creating a facsimile of Trouvé’s trike but also then taking it to Paris on the 140th anniversary of his maiden run was the product of research for another electric car project of mine. EVs are the future but, in the present, it seemed right to bring back to life their origin.

And so the internet served up the details of a former IT engineer called Christian Richards, who now hand-builds Victorian bicycles and tricycles in his workshop near York. To my surprise, he wasn’t perplexed by my idea. 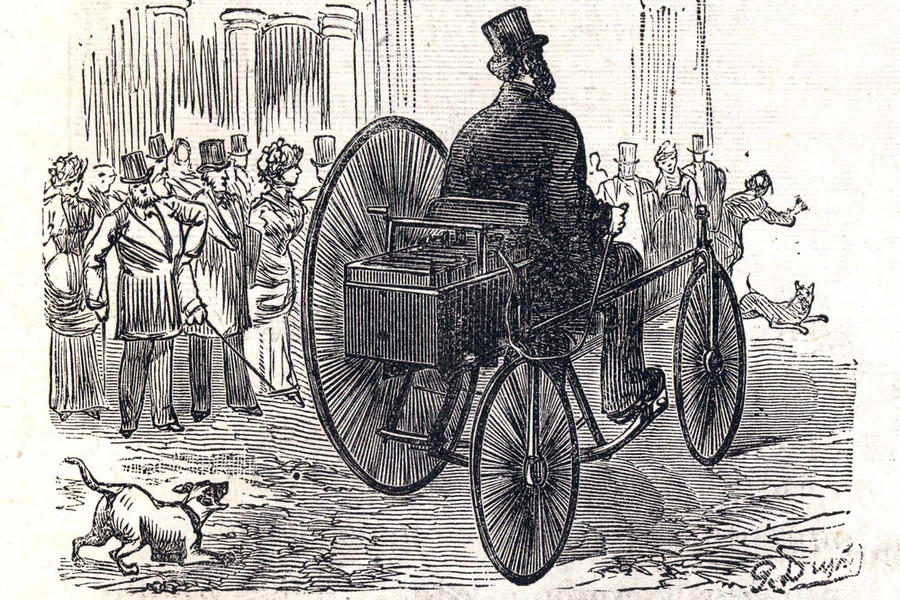 “Bizarrely, I was thinking about putting an electric motor on a Coventry Lever tricycle when you called,” he told me. As you do… Richards was unfamiliar with Trouvé’s 1881 run but was up for the challenge of building as accurate a replica of his EV as possible (not an easy task, given there are few period images). He was less enthused by the fact that my discovery of the run and its anniversary were six weeks apart.

The project has been backed by Maxus – a Chinese company risen from the ashes of West Midlands van maker LDV – which was keen to help recreate history and to give our replica a suitable piggyback to Paris in one of the electric vans that it makes.

With the clock ticking, Richards locked himself away and started crafting the tricycle. The frame already existed, but when it takes a day to make and fit the spokes to each of the three wheels, time evaporates. And although he’s used to making spoked wheels and other Victoriana, electric motors were new to him.

“I decided to fit a modern e-bike battery and motor with an extra sprocket for the main driving wheel,” Richards explains, looking at an A1 print of an 1881 illustration for reference. “The Coventry Lever tricycle uses pedals and a lever to propel it, so we kept those. And they proved useful for added braking.”

A month of artisanship later and the Trouvé is ready to head to Paris. France is locked down, so Richards regrettably can’t make the trip. He loads the finished masterpiece into our Maxus eDeliver and his face looks melancholic as it becomes smaller in the wing mirrors. 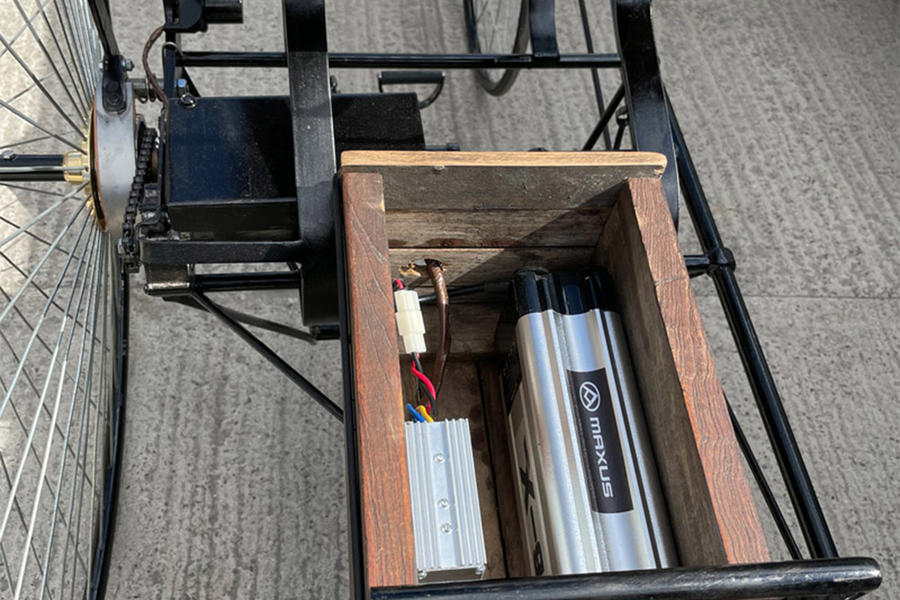 The French capital is a ghost town, the exception being two elderly gentlemen sitting on a bench. Like spectators at a tennis match, their heads pivot in unison as our electric Trouvé machine wobbles, shakes and rattles past them on the cobbles. One of them is our man Chargueron, who grins and exclaims: “It’s very pretty – a really beautiful object.”

The devil on his electric chariot or a visionary driving a machine that was decades or even centuries ahead of its time? Maybe Trouvé was a bit of both.

Ultimate EV guide: How to buy a used electric car

Which electric cars no longer qualify for a grant in the UK?

I expect the handling would have been interesting with two wheels on one side and a single one opposite - as well as a high centre of gravity with the batteries and occupant seemingly mounted high up, as if on a horse.

It's worth remembering that at the turn of the last century, it was a close run contest between electric and combustion engine vehicles - with the latter just winning out through better performance and range. Globally things aren't so very different now - except the legislators have more influence!