Audi has released a series of official design sketches showing a new compact crossover concept that is planned to make its world premiere at the Detroit motor show in early January.

Billed as a design study, the new crossover is said to provide hints to the appearance of the next generation of Audi Q models, including a new Q1-badged offering confirmed for production in 2016 by the German car maker’s chairman, Rupert Stadler, earlier this week.

In keeping with a design lineage that can be traced all the way back to the original TT concept car, it also sports a high waistline, shallow glasshouse and prominently flared wheel houses that accommodate the concept car’s 19-inch wheels.

Further design elements include a new interpretation of the German car maker’s signature single frame grille, into which the word “quattro” appears as a nod to the new concept’s four-wheel drive system. The crossover ’s heavily tapered front end also houses distinctive trapezoidal-shaped headlamps featuring what the initial design sketches allude to as being LED graphics.

A defined shoulder, or “Tornado line” as Audi refers to it,  dominates the flanks, running from the headlamp all the way through to the tail lamp.  Cladding within the wheelhouses and along the sill hint at the new Audi’s ability to head off-road, in keeping with official information that suggests it possesses “high ground clearance”, is a “car for all roads and tracks” and is suitable both for “everyday driving and sporty recreational use”.

A long wheelbase and short overhangs are claimed to combine with wide tracks both front and rear to provide the new five-seater with what Audi describes as a “confident stance”.

At 4200mm in length, Audi’s latest concept is almost 200mm shorter than the first-generation Q3, leading to rumours ahead of its unveiling that it is, in fact, a lightly veiled look at the upcoming Q1. Audi first hinted to a crossover positioned underneath the Q3 with its Crosslane Coupé concept at the Paris motor show in 2012.

E-tron identification within the sill area of the car depicted in the official sketches indicates the new Audi crossover concept will showcase a plug-in petrol-electric hybrid system; most likely a similar system to that used in the company’s first plug-in hybrid production model, the A3 e-tron. 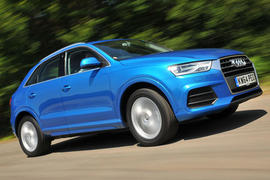 I give the Audi designers credit for something that is not just a photocopy of all the other Audi designs - they've copied the Evoque instead.
Here's my name again 6 December 2013

People need to relax with the criticism of the wheel size. What none of you seem to realise is that those concepts depict 15" rims. The Q1 is just really tiny. Because I think this is a letter and sign off comments Here's my name again.
Cobnapint 6 December 2013

In the same way that it is time theatres stopped charging a booking fee every time you buy a theatre ticket, it is high time car design houses called a halt the ridiculous practice of presenting us with images of cars with oversized alloys. Nobody can take them seriously anymore because we all know the final product won't have those wheels, won't have those MG42 pillbox like windows, and won't have front seats that have no backrests. The dash will probably be different to. In essence, it's going to look like a slightly taller A3 with an Evoque copying roofline. I could have drawn that in 5 minutes if they'd asked.