VW model does away with a glass windscreen and features active aerodynamics; its design could influence a sports model that'll sit above the Volkswagen ID
Open gallery
Close

Volkswagen is planning to introduce an electric sports car and minibus to its new zero-emission line-up, with the brand’s patented images published on the World Intellectual Property Organisation (WIPO) website.

The first car, a low-slung sporty model, appears to be a two-door coupé with active aerodynamic features, including an extendable rear fin. The above view also shows that it features gull-wing doors, and the design’s lengthy shape suggests it has been crafted with minimal air resistance in mind.

The minibus images resemble the initial VW electric concept, the Budd-e, first seen at the Consumer Electronics Show in Las Vegas in January this year.

The range will also include the ID hatchback, which was seen in concept form at Paris motor show and will be the first electric car in the new range to make production.

All of the models will be built on Volkswagen's scalable EV platform, called MEB, with shared components such as motors, axles and suspension included. 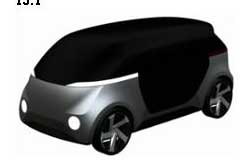 No technical details have been revealed with the latest images, but we know the ID concept uses a 168bhp electric motor.

In the sports car model, more power could be produced with a dual motor setup, which is used in electric models like the most potent Tesla Model Ss.

The lack of glass windscreen on the sportscar design also hints that this could be an autonomous model developed to demonstrate driverless technology, however, it seems highly unlikely that this windscreen-free design would make it to production.

No arrival date has been set for the second EV Volkswagen model, but the firm’s EV boss Christian Zenger told Autocar at Paris that the next electric concept from the range will be seen ahead of the production ID's launch in 2020.

It has also confirmed that the electric line-up will incorporate its first autonomous car, expected in 2025.

Is the Volkswagen ID a game-changer?

Don't understand this 'no windscreen' stuff that VW are suddenly peddling. For me the windscreen is a key thing to avoiding travel sickness, and it's also a nice thing to look out of whilst travelling! Would you build a house without windows? No. The purpose of glass is to let light in. I don't know where VW have got this fascination from; they seem to be clutching at straws to appear innovative after dieselgate. Strongly dislike this direction.
RacingPuma 18 October 2016

WHY the conventional shape?

Really struggling with this as a windscreenless car.

Why the thin A pillar? There is no need to eliminate blind spots, so why make the structure heavier and more complex by creating thin A pillars?

Why have an unaerodynamic change of angle between the bonnet and "windscreen area" when there is no windscreen. A "one box" shape would be much more aerodynamic and logical for a windscreenless car.

Will occupants of driverless cars really be OK with not being able to see forward but also want long, blind spot eliminating, side windows to maximise the side view.