BACK TO ALL NEWS
Currently reading: Chevrolet Camaro set for RHD
UP NEXT
New Mercedes-Benz EQA revealed as sub-£40k electric crossover

Chevrolet could offer its iconic Camaro in the UK in right-hand drive next year, according to company insiders.

Company sources at the Geneva motor show told Autocar that a right-hand drive Camaro was a strong possibility for the UK as it’s based on the Australian Holden Commodore, which is originally engineered for a right-hand drive market.

There is a desire within the firm to produce the car for the UK, but there must be the economies of scale to justify it. Chevrolet has also revealed that the Corvette will be marketed again as Chevrolet in Europe, including in the UK.

Also confirmed at the show were the firm’s intentions to sell the Chevrolet Volt in the UK alongside the Vauxhall Ampera. It would be priced under the Ampera and pitched at the retail market, while the Ampera would mainly be for fleet sales. 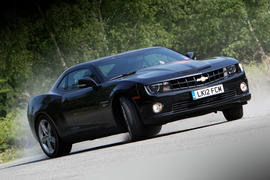 I think the Mustang would sell better in the UK than the Camaro. It has a much better quality interior, better handling(despite having live axle), and the new 3.7 V6(305 HP) and 5.0 V8(412 HP) are more powerful and get slightly better fuel economy.

I wish Dodge would do the same with the Challenger, I think I like that even more. Plus, as the Challenger is based on the same chassis as the 300c, surely it wouldnt cost too much to fit it with RHD and the Mercedes Diesel. I'm sure that combination would sell well.

Nice to have a Camaro on the road over here, but with that V8 it has to be Saturday catr only.

The V8 SS version is fast - seriously fast - 10 secs to a 100 type fast and when you here that LS3 on the overunn, all the pops and bangs make it sound like a Thunderstorm - lovely. Makes you wonder, if Chevy can make an old pushrod V8 pop and rumble like that, why can't Fiat or Alfa make a Multiair do the same?