BACK TO ALL NEWS
Currently reading: McLaren looks to expand line-up beyond new GT model
UP NEXT
New Aston Martin DBR22 is £1.5m, V12 speedster

McLaren made a surprise announcement at the Geneva motor show, revealing plans to launch a new, bespoke grand tourer and releasing the first image of the model.

CEO Mike Flewitt said at the time the new car “combines competition levels of performance with continent-crossing capability”. Earlier this year, Autocar spoke to Flewitt and uncovered the plans for the GT, alongside a possible 2+2 model that could arrive further into the future.

Flewitt said of the upcoming GT that he isn’t about to design a rival to the Bentley Continental GT. He said: “It would still be a carbonfibre, mid-engined car and, without doubt, the most sporting GT on the market. The 570GT was a clear derivative of the 570S, and I loved it, but to be honest the differences were quite small.

“So we will do another car in that place but more differentiated, with a more dedicated focus on the characteristics you want in a GT and a more distinct bodystyle.”

When asked whether a GT would create its own model line alongside the existing Super Series and Sport Series lines, Flewitt replied: “That would be an opportunity for us. I would like to pitch it uniquely. I’ve thought about it a lot, so watch this space.”

Flewitt’s thoughts on the 2+2 are less clearly defined and he confirmed it’s not part of the existing Track 25 plan to deliver 18 new models by 2025. But he said: “I wouldn’t rule out one day doing at least a 2+2. It’s doable, so we'll look at it". 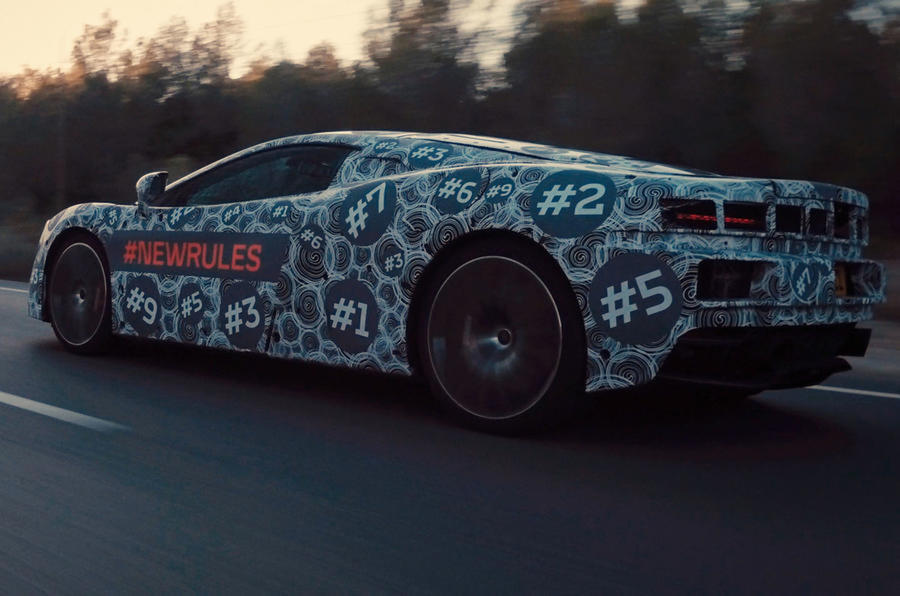 The biggest headache is likely to be packaging rear seats and the engine all within the wheelbase. “The car can’t have an enormous wheelbase. It has to stay agile,” said Flewitt.

However, he is open about future plans to downsize McLaren’s internal combustion engines as electrification plays an ever more important role. A move to solid-state batteries (“2023 if I’m being optimistic, 2025 being realistic”) is described by Flewitt as “a game changer” that will likely make the packaging of such a car dramatically easier.

McLaren’s first series-production hybrid (after the limited-run P1 and Speedtail) will be launched in 2021, with the electrics working with the engine to power the rear axle. Flewitt said he has no choice but to adopt hybrids, because global emissions legislation means a company with no small cars to help reduce the average fleet CO2 would simply be banned from sale in large parts of the world without it.

“That said, while I don’t like the 40kg weight gain, it does allow us more power, better response and more linear performance response,” he said. “What’s more, you will be staggered by the CO2 output. I can’t give you numbers, but think of a supercar with the same CO2 as a [Ford] Fiesta.”

In time, McLaren will also introduce an electrically driven front axle at a likely weight penalty of 120kg, but this will massively improve traction and therefore performance, especially in the wet, as well as provide a huge boost in energy regeneration, meaning it should be able to maintain peak performance even when electricity stored while plugged in has been used.

Flewitt has also spoken of the LT version of the McLaren 720S, which he said will come to market at the end of 2020. He confirmed the power gain will be “at least” as much as that which turned the 570S into the 600LT, so expect a minimum of 740bhp.

However, he said his engineers are struggling to lose the 100kg now expected of LT models “because we made the 720S as light as we could in the first place”. He reckoned they’ll get close to the three-figure weight drop but perhaps not all the way.

McLaren is also battling to find an aesthetically pleasing way to incorporate the 600LT’s trademark top-exit exhausts with the active rear aerodynamics the car will use (“I’ve seen three proposals so far and rejected them all…”). Nor has he decided whether to specify a production limit as he did with the 675LT. “Part of me wants to keep it open as Porsche does with its GT models," Flewitt said, "but we may limit it to something like 750 of each [Coupé and Spider].”

Would be a market changer if they did a proper four door instead of this 2+2 idea, it’s about time this old fashioned idea was put to rest, 2+2’s are next to useless, their occasional, whereas, a proper four seater is better, more room, Car can carry four up longer distances with more comfort for rear passengers...

I think you missed the point. They're delaying the 2+2 because of packaging issues. They seem to be fully committed to mid-engined cars.
Peter Cavellini 10 March 2019

Yes, they’re delaying the 2+2, and yes, the Cars are rear mid-engined, but, whose to say they couldn’t do a front engined Car?,

i can't help hoping they'd make the gmd t25 (or a variation on that theme), but clearly it'll never happen. you don't have to be the fastest to show the world how clever you are

Good outlook for a great