BACK TO ALL NEWS
Currently reading: How to make a people's car from scratch - part two
UP NEXT
Alfa Romeo to show new sports car in early 2023

How to make a people's car from scratch - part two

A few weeks ago we chose the look and key aims of the 2025 people’s car we’re creating from scratch. Now it’s time to get into design and engineering
Open gallery
Close

Before you get stuck in, how about catching up on part one?

Two weeks ago, with the help of Coventry-based car creation company Envisage Group, we set out to design a car to suit the demands and desires of car users in 2025 to 2030 – both to investigate the future of cars and to understand the sheer complexity of modern-day car creation.

Our car would be Volkswagen Golf-sized, battery powered and capable of carrying five occupants in great comfort and potentially up to seven. It would utilise all of the technological developments we and Envisage’s experts could realistically forecast for the next 15 years while also remaining fundamentally practical and affordable. 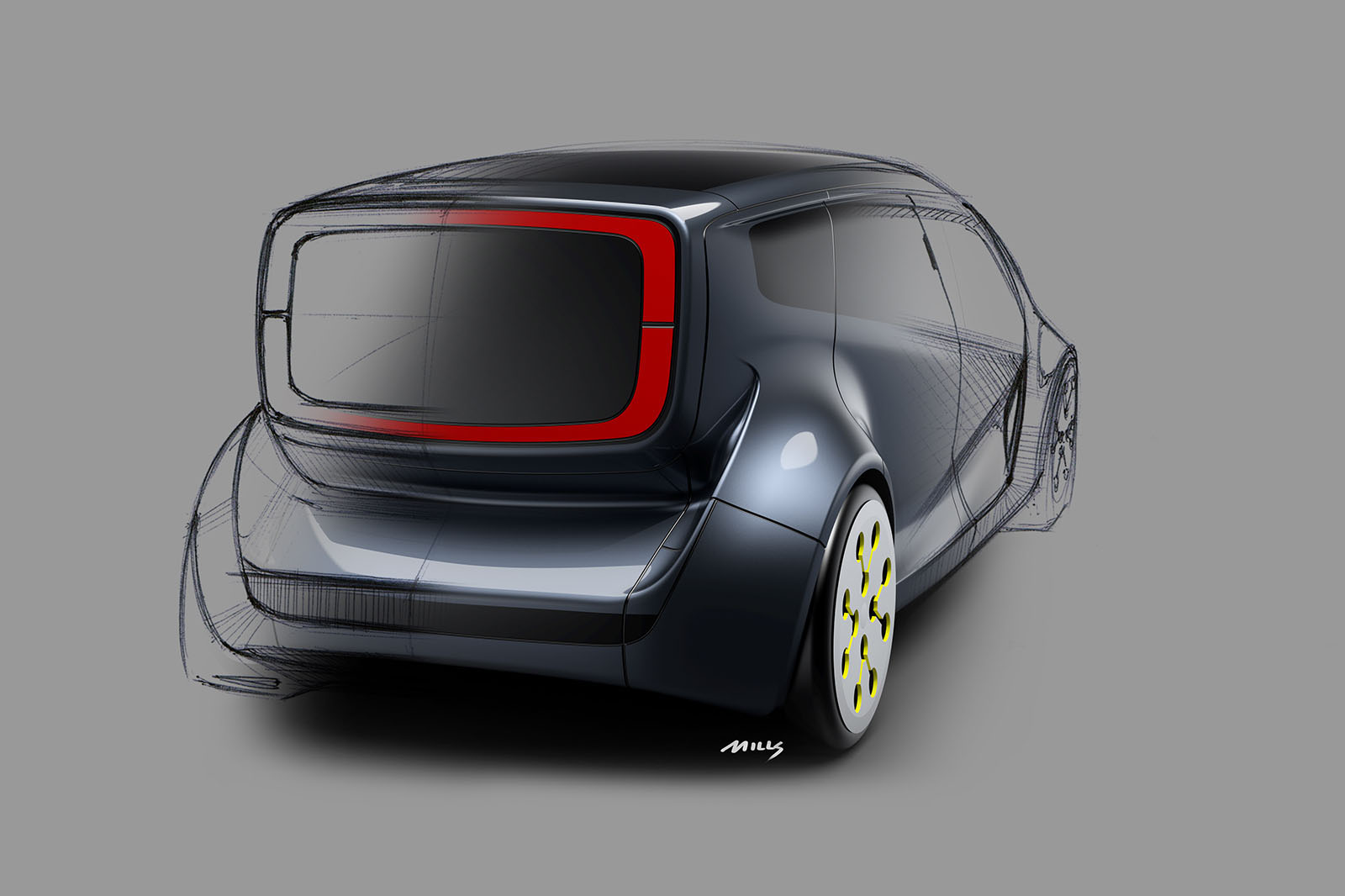 Autocar’s journalists would play the role of client, laying down the concept’s fundamentals. The designers were to be four ex-Coventry University transport design students (now graduates), who have worked at Envisage through the summer under the direction of two well-known Envisage professionals, Oliver Le Grice (design) and Bill Walsh (engineering). Two weeks ago, in the first of a three-part series, we agreed the car’s duties, its basic dimensions and broad mechanical layout, chose a basic design theme and found a name, Share P42.

Why the name? Because we reckoned ‘Share’ went straight to the heart of the car’s role – and, as a bonus, it would allow us to redesign the familiar ‘share’ computer symbol as an attractive nose badge. And ‘42’ because, in early discussions about the car’s broad remit, Envisage CEO Chris Devane prophetically remarked that the car should be dubbed ‘42’ – in honour of author Douglas Adams’ famous answer to the conundrum of “life, the universe and everything” in his immortal comic science fiction series The Hitchhiker’s Guide to the Galaxy.

We’re looking at an advanced frontwheel-drive electric car, as roomy as a rectangular prism inside yet sleek and advanced on the outside. To maximise the space needed for flexible seating and allow best cabin access, the P42 is being proposed with a ‘clap hands’ system of very large doors that eliminates a centre pillar. The rigidity contribution made by this normally vital member is provided instead by an innovative floor, roof and sill structure. 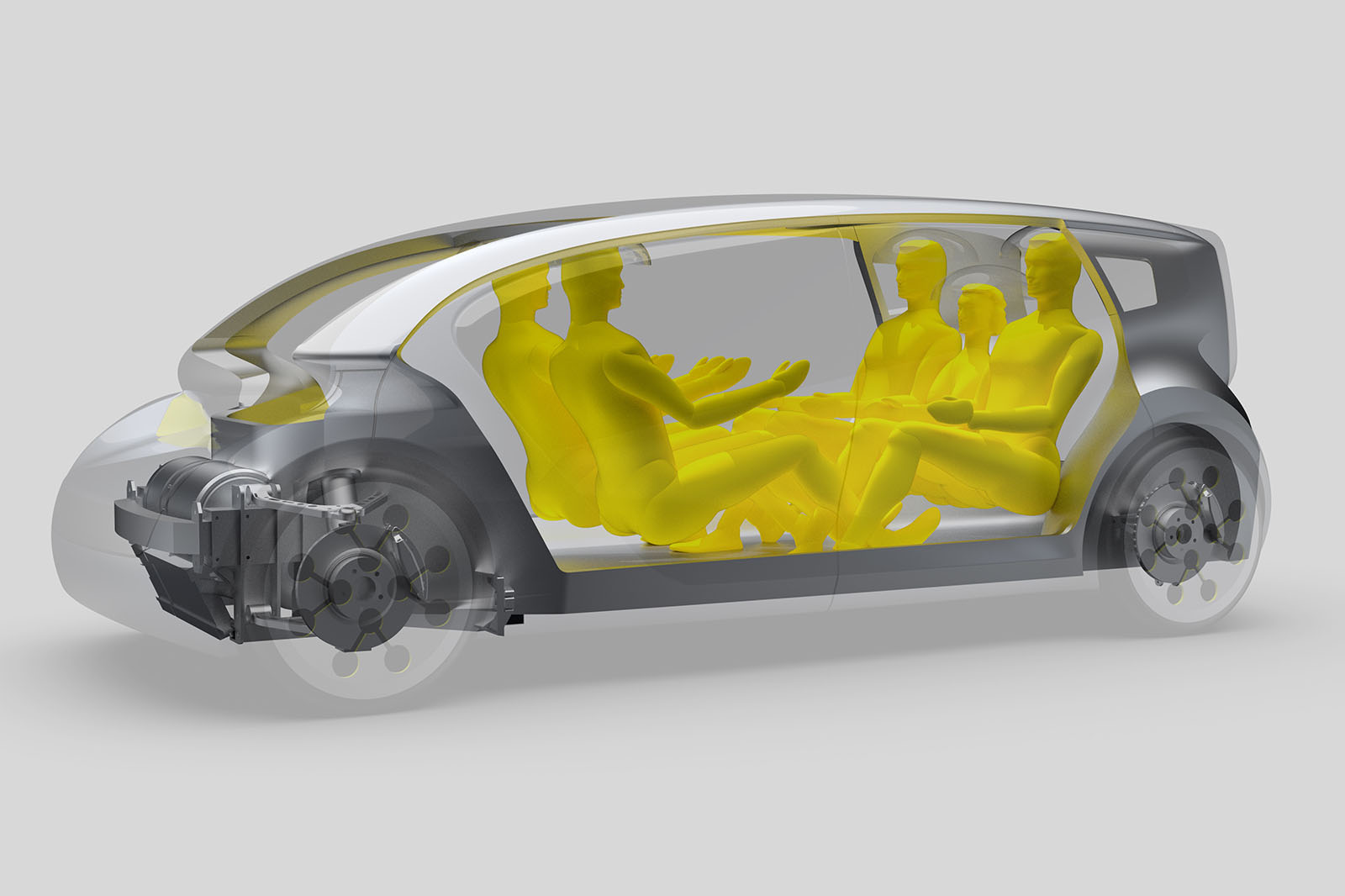 The P42’s monocoque is made mostly of aluminium and carbonfibre for weight control, but the exact proportion of each is still under discussion. Walsh believes recycling will become a very big deal by the time we reach the hard design phase, and large quantities of carbonfibre will be costly, slow to produce and border on the undesirable from the recycling point of view. Were we doing this for real, we’d be hoping one of a range of more sustainable, biodegradable fibres currently under development might emerge over the next decade.

The electric drive motor is carried transversely in the nose, its power provided by a sled-like battery in a well-protected position under the flat floor. Front suspension is by short double wishbones to save space and the proposed rear set-up is independent by compact trailing arms, to provide a high standard of ride comfort while allowing a wide and low tailgate to take advantage of the flat floor.

One early decision has driven many others: Envisage’s confidence that designers of volume cars in 2025 will be able to depend on active, affordable, self-deploying front and side crash protection to meet forthcoming regulations. The P42 assumes both systems, and together they dramatically reduce the car’s overall length and control its width while protecting both occupants and battery in a severe side impact. The upshot is that they have allowed our design team to configure a front-drive electric car at a Golf-like length of 4.3m, while providing flexible cabin accommodation for five or even seven people.

The other major space-saving ruse is the P42’s complete absence of a classic, looming dashboard to contain its HVAC system (heater and air-con to us laymen), instruments and airbags, among other gadgetry. The HVAC fits into space liberated by the comparatively small size of the drive motor – versus a petrol or diesel engine – and by the radical proposal (for now) that much of the P42’s electrical control software will be carried outside the car, in the cloud.

This idea is already under serious discussion and Envisage believes it could become reality over the next decade. The P42’s passenger airbags should be able to be carried in the car’s pillars or its small forward cabin bulkhead and the instrument pack is proposed as an augmented reality head-up display, which can highlight external hazards. Gesture and voice control will govern other functions such as audio and ventilation. 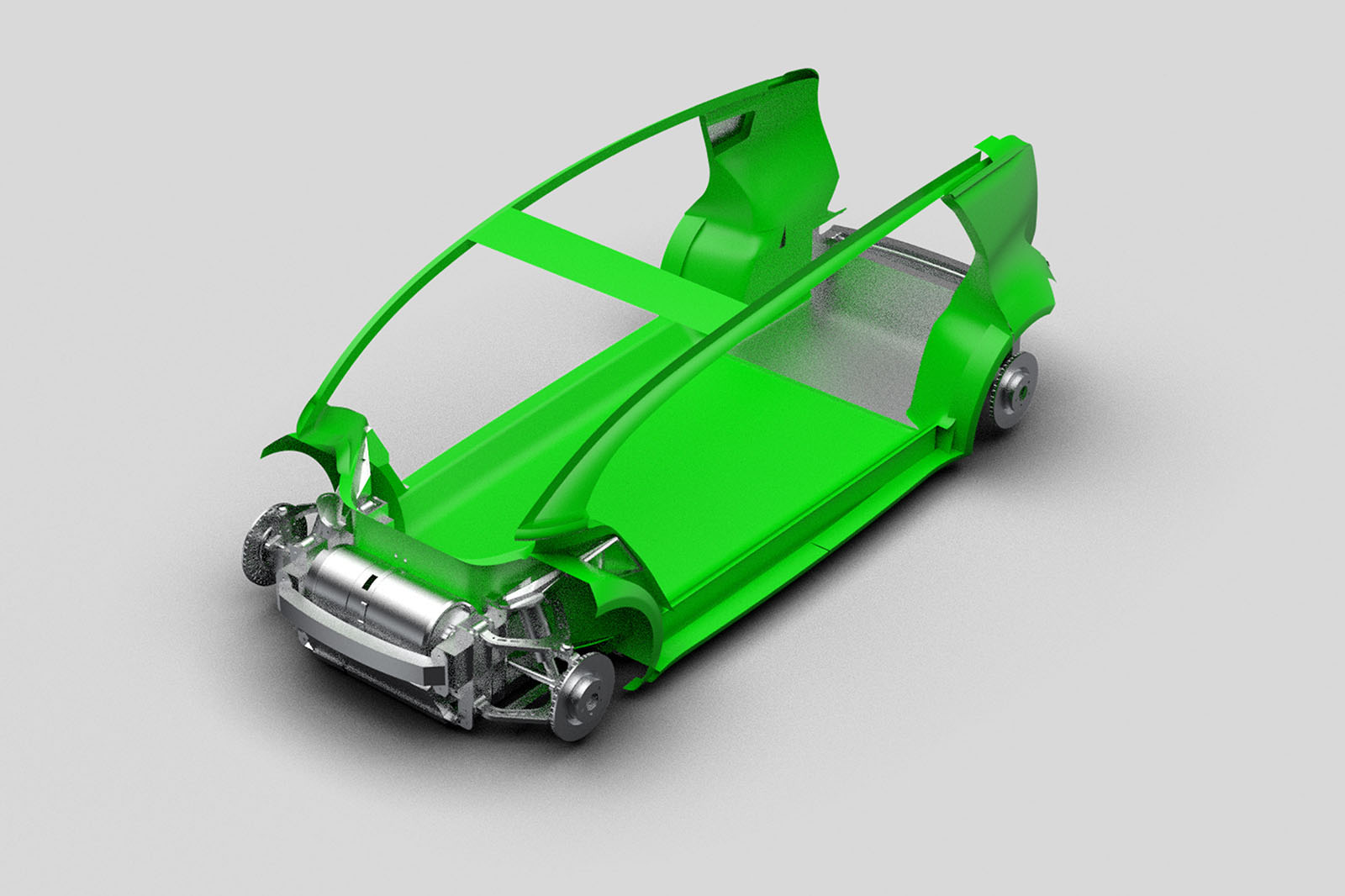 How will the driver control the car? Our view is that autonomy will be common in easy conditions such as motorways or crawling traffic but won’t be universal, so the P42 needs a steering wheel. The steering will be ‘by wire’ rather than unbroken mechanical connection, and the same will go for braking, which will aim seamlessly to integrate retardation from friction and regeneration.

On that note, we’re proposing a single stop/go foot control. Contemporary electric cars with strong regenerative braking already approach one-pedal operation, via the accelerator, and Walsh says such systems are under serious consideration. There will be no gears to shift, and the direction of motion – forward, backward, neutral – might even be gesture or voice controlled. Work proceeds in all of these areas and more; our concluding episode will put values on motor power, battery size, vehicle weight, charging time, acceleration and cruising range.

Our Autocar-Envisage Share P42 project illustrates graphically how closely engineering and styling need to work together nowadays to create a car. How could all the rule-breaking refinements above be incorporated into a contemporary design – against a punishing schedule – without the designers knowing intimately of new stuff under the skin? And what would be the point of engineering such enticing refinements if the styling didn’t speak eloquently about it?

With the help of the rest of our designers, who have now coalesced into one team, as happens with real-world projects, Michael Mills’ original design has progressed many a mile. While keeping to the original concept, the P42’s nose now takes full advantage of the compactness allowed by deployable safety systems, the air scoops and ducts are placed where they’ll be needed, the side windows have more character, the doors are the correct shape and size and there’s a much more convincing design for the tailgate. 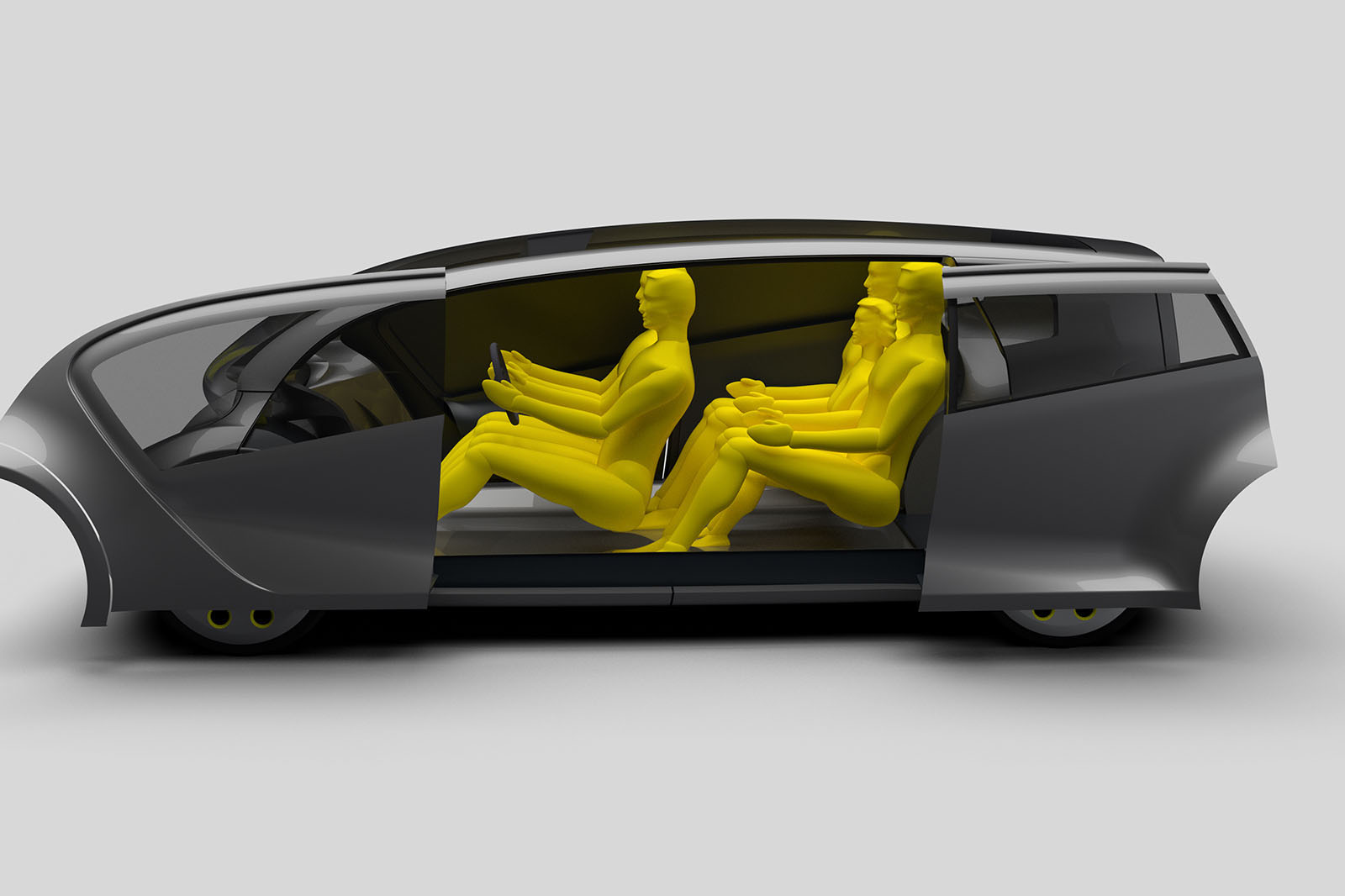 One more amazing refinement: Envisage’s experts are proposing a single, hugely powerful light source in the car, with a system of projectors and reflectors that use it at varying intensity for headlights, interior lights and everything in between. So ends the era (possibly) of the heavy, pricey, space-wasting traditional headlight…

Inside, the seating has been laid out to suit real people, but we’re still working on proposals that show exactly what will confront the driver in the seat. We’ve decided that all occupants’ seats will move flexibly except the driver’s. Neither we nor Envisage have quite enough trust in the driverless principle, even in 2025 or 2030, to allow the person at the wheel to face away from the road. Separately, Envisage’s ‘clay academy’ people are working on a greatlooking modular seat design for the P42 that will self-position, heat and cool the occupant, and protect occupants when an accident is threatened.

At the end of phase two, many key P42 decisions have now been made. Envisage’s experts are confident enough to have started milling the one-fifth-scale model they’ll eventually paint, finish, photograph and display. It’s a fascinating time, but even bigger stuff is in prospect. See you in two weeks’ time!

the future was made last year

I am a little concerned at the similarity of the styling of this vehicle to the SHADO INSPIRATION EV of July 2015, even if this does have covered in wheels. The overall proportion and theme are too close for comfort..... and as for the structural rigidity of the 'green' body structure, well all I can say is floppy and naïve.
Flametrench 12 December 2016

In an autonomous future, will we need headlights?
Pistachio 12 December 2016

This reminds me of a final year project that Andrew Dyson did in 1988 at the Royal College of Art, not saying its bad just saying
View all comments (4)