BACK TO ALL NEWS
Currently reading: Euro NCAP on the future of road safety
UP NEXT
Volkswagen unveils larger and more advanced new Amarok

Europe's car crash test regime has played a key part in making cars safer in the past 20 years, but NCAP isn't about to stop pushing
Open gallery
Close

The sight of a 1997 Rover 100 crumpling into a ball of scrap as it impacts a test barrier remains alarming. Yet the comparative ease with which a 2017 Honda Jazz handles a similar collision is a graphic illustration of the safety advances made in the past 20 years of the Euro NCAP consumer crash test regime.

As Euro NCAP celebrates its landmark with this vivid back-toback test, it is also eyeing the next 10 years of testing and will ramp up its famous starratings to evaluate a new generation of electronic safety aids while also refining the crash test itself to achieve more realistic results.

Euro NCAP organises its test regime into five-year ‘Roadmaps’ to clearly signal to car makers how the star ratings will evolve. It is in the early stages of the 2016-2020 Roadmap, but consultation is under way to add new tests on advanced accident avoidance technology to run from 2021 to 2025. “Euro NCAP has achieved a huge amount, but there are new safety advances coming all the time and we will evaluate them in the test to encourage standard fitment onto cars,” says Matthew Avery of Thatcham Research, the insurance industry test laboratory and Euro NCAP’s UK partner. 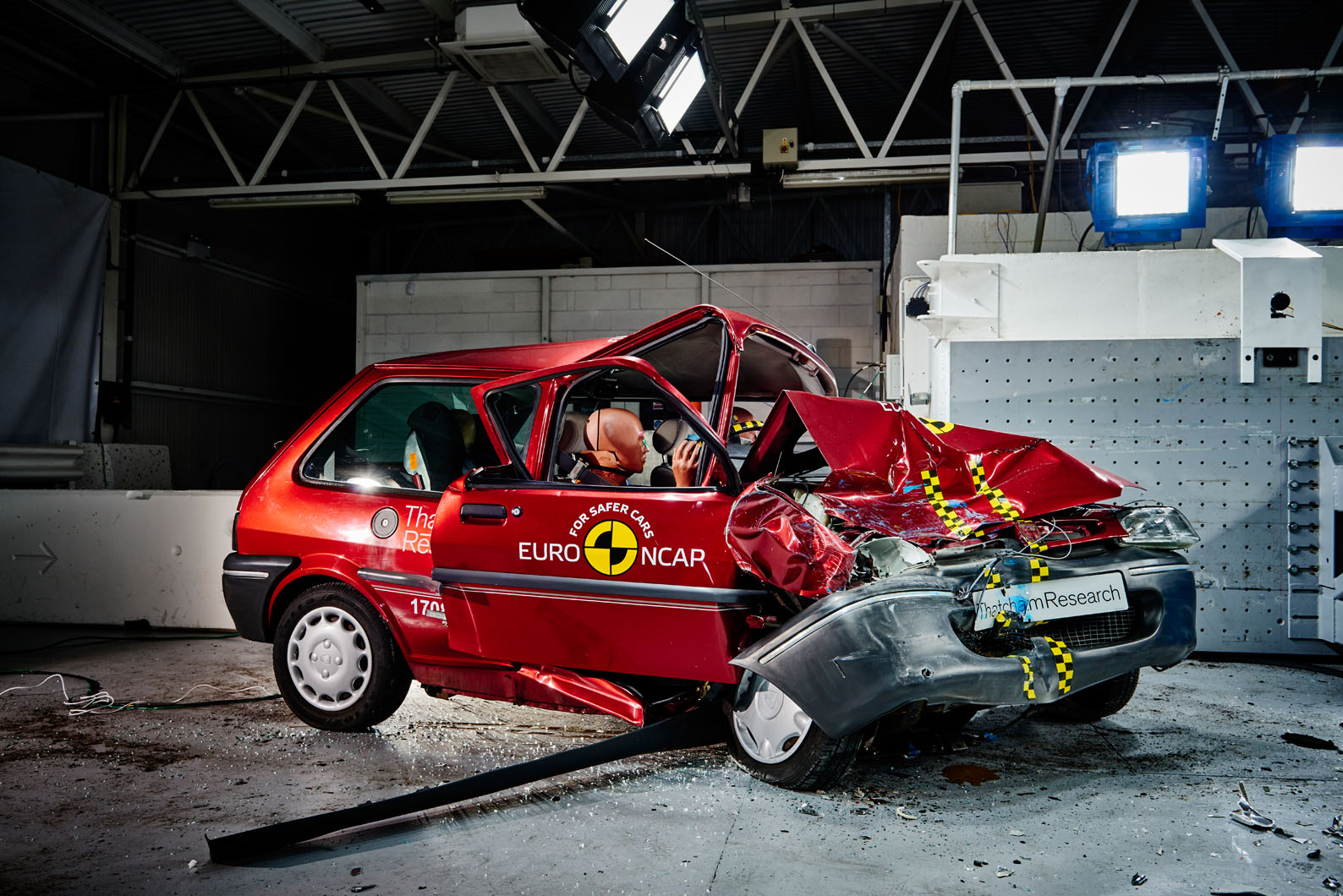 The future push is towards crash avoidance, and tests are coming in 2018 to evaluate if camera-based automatic emergency braking (AEB) can detect cyclists and, at night, pedestrians. Also in 2018, the test for emergency lane keeping (ELK) will be refined to assess if camera and radar sensors can detect broken white lines and the carriageway edge.

“Twenty per cent of the killed and seriously injuried [KSI] are on A-roads, and if we can avoid those collisions, we can make a big improvement in safety,” says Avery.

The 2021-2025 Roadmap will encourage the standard fitment of autonomous emergency steering (AES), next-generation ELK and traffic across path (TAP), which hand over control of the car to sensors and computers programmed to prevent a collision.

Development of AES poses a significant technical challenge, says Avery, because it relies on multiple camera, radar and lidar sensors to detect a potential collision and steer the car to avoid an impact. “The steering wheel has to declutch so the driver can’t override the sensors and the car has to make a complex decision in a split second,” he says.

AES is expected to make production in around 2022-2023 in self-driving technology.

ELKhas been tested since it was introduced, but the early systems weren’t very effective, according to Avery. A new, robotised, mobile rig will be deployed in 2018 to tighten the test at up to 70mph. 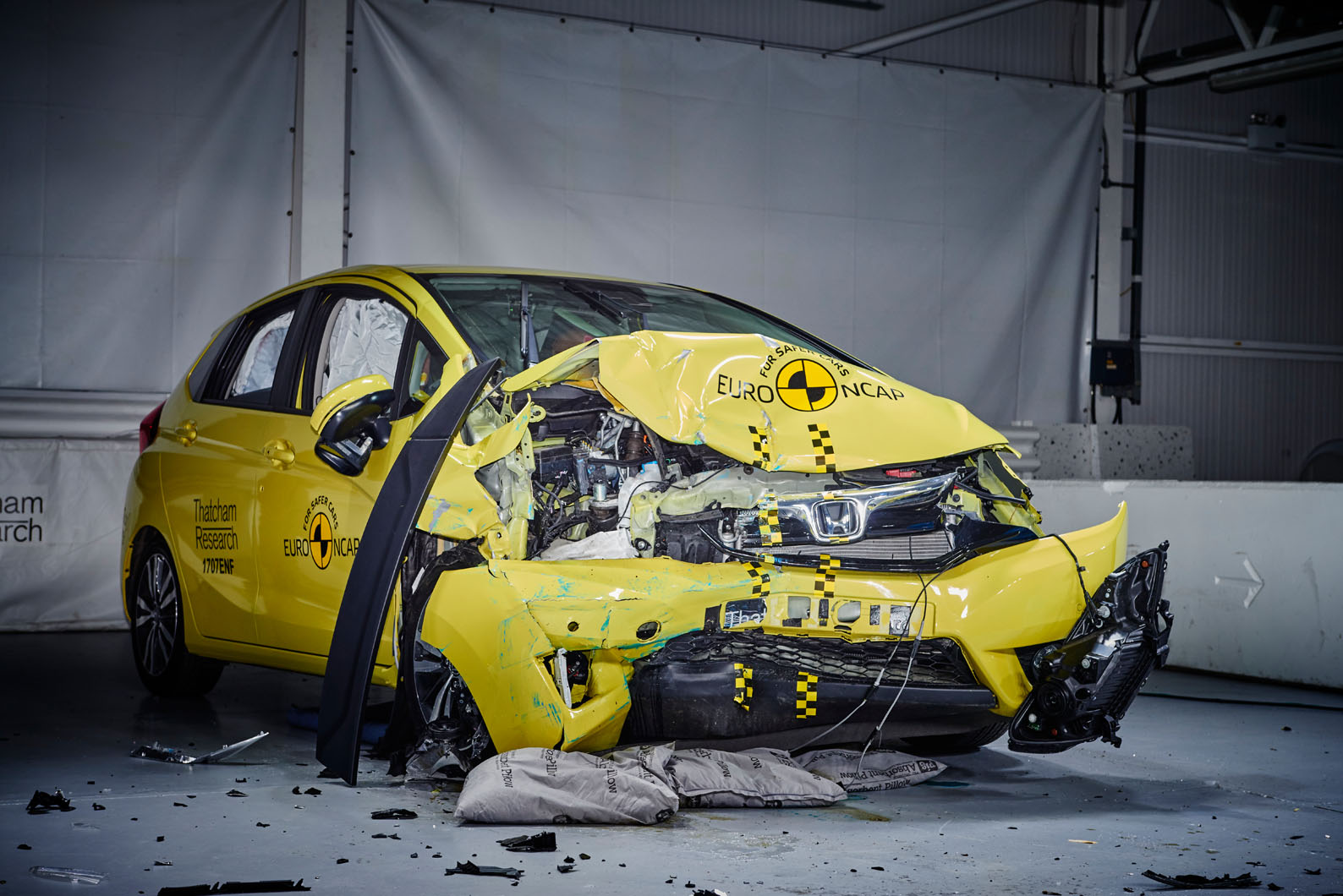 Another technology to be included in the star ratings is TAP, a radar sensor that applies the brakes to stop a shunt when a car pulls out from a side road. It works below 30mph at a range of 25m and is just becoming available on cars such as Volvo’s XC90. Ultimately, the same sensors will stop a car emerging from a side road into the path of an oncoming vehicle.

Euro NCAP isn’t leaving the 40mph barriertest procedure untouched, either, because it has two major revisions planned. The first will introduce ‘compatability’, the real-world impact of a smaller car with a bigger one. The second will bring in more sophisticated, £500,000-each ‘Thor’ crash test dummies, which are already in use by car manufacturers.

Basic physics dictates that the heavier car in a shunt exerts a larger force on the smaller car, exposing the occupants of a smaller car to more danger, yet today’s Euro NCAP test can represent only cars of the same size crashing into each other.

Although Euro NCAP emphasises that star ratings should be compared across the relevant vehicle class only – cars of similar weight – many drivers mistakenly believe that all five-star cars are equally as safe. 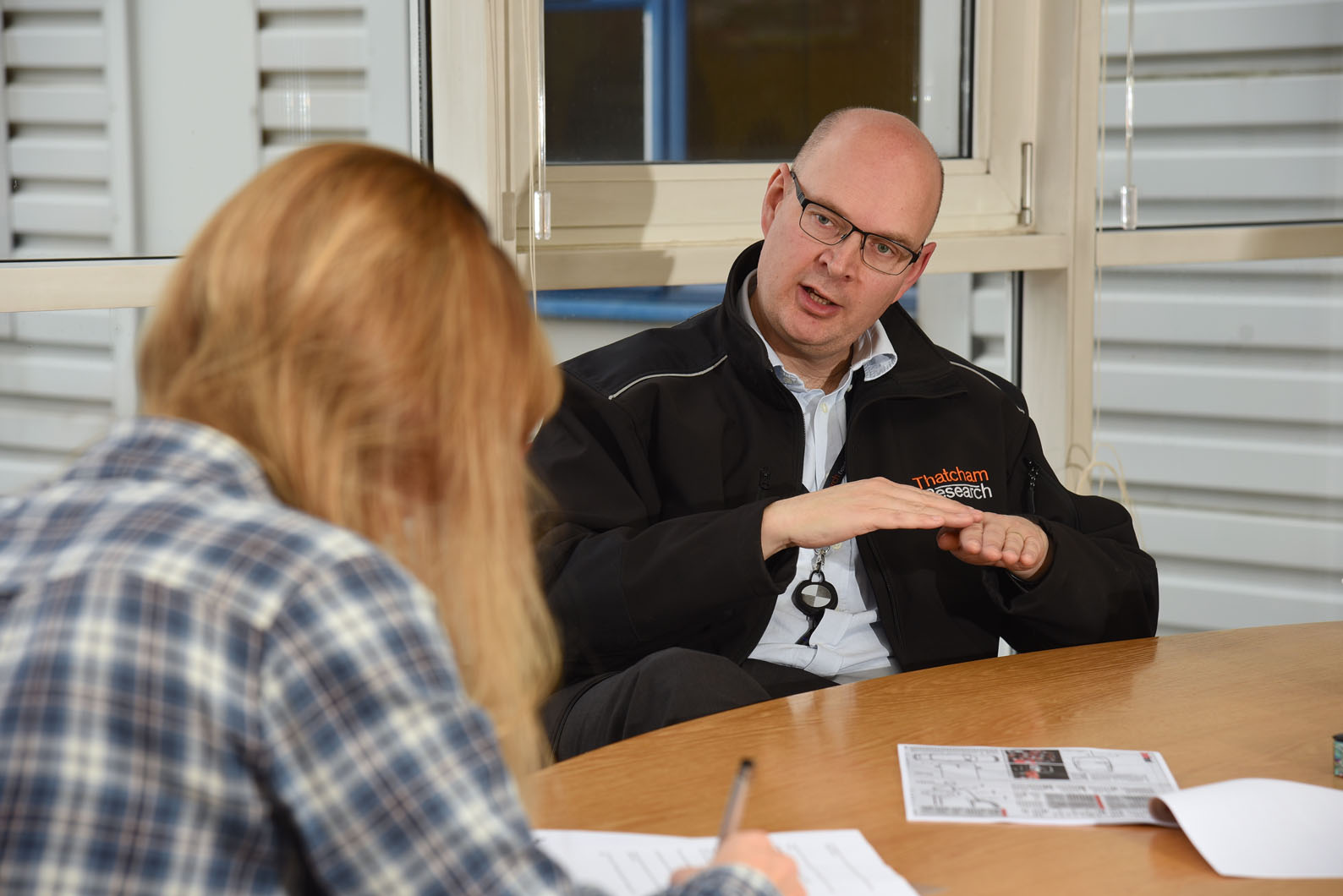 To address this, Euro NCAP will crash cars into a new 1500kg mobile deformable barrier (MDB), a soft obstacle riding on a wheeled trolley, which will transfer higher forces into a smaller car, compelling manufacturers to design safer small cars. It will also encourage better design of bigger cars with crumple zones perfected to treat smaller cars more gently.

When Euro NCAP was launched in 1997, it was contentious, with car makers unused to public scrutiny on the touchy subject of safety. But the industry has learned to work with Euro NCAP and Avery is quick to praise car makers for the massive advances they have made, graphically demonstrated by those Rover 100 and Honda Jazz tests.

At the same time, Euro NCAP itself has become more thorough since the early days. For example, the procedure for evaluating AEB, introduced in 2014, has multiple test modes. These include city and inter-urban speeds with three pass/ fail thresholds: avoid, mitigate and inactive. Points for the star rating are allocated on a scale of zero to 100%, with systems that ‘mitigate’ scored according to how much speed they scrub off. Further refinements will test AEB with different impact ‘offsets’. Avery describes this as a “very severe test for the sensing systems that will be difficult for the car makers to design”.

Euro NCAP is not standing still, but neither are car makers. The next 10 years promise more safety technology, better consumer testing and, most important, safer cars. 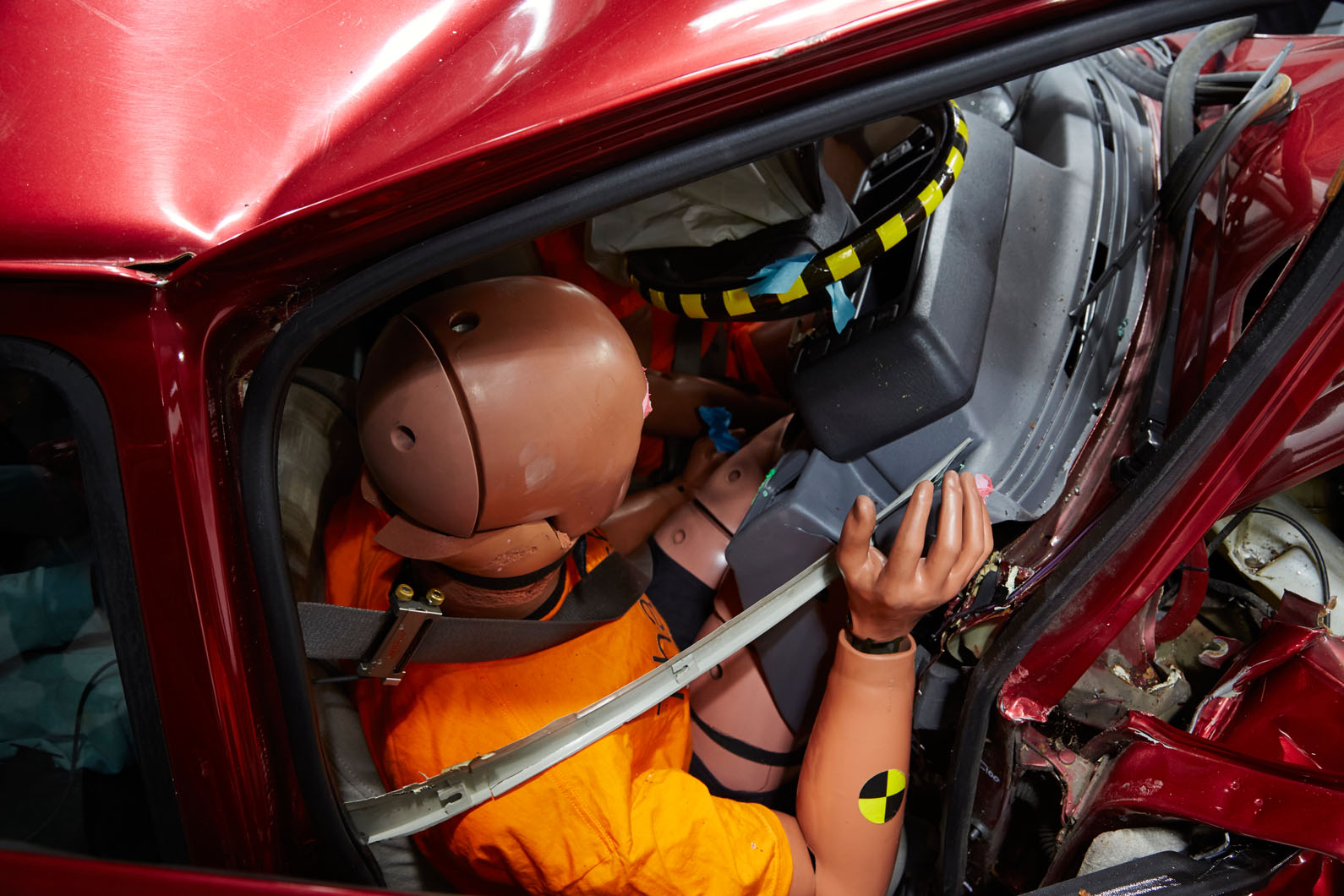 Euro NCAP measures its success by the significant drop in road users killed or injured over the past 20 years. When the programme started, there were 3200 road fatalities in the UK. Twenty years on, that has dropped to 1600, and occupant deaths and injuries are said to have fallen 63% to 8500 in the same period.

In that time, Euro NCAP has tested around 630 individual models in a total of 1800 crash tests and at a cost of £136 million.

The heavy investment and engineering development, of course, have come from the car industry, a point acknowledged by Matthew Avery from Euro NCAP’s UK partner, Thatcham Research. “This is a partnership and the car makers have risen to the challenge,” he says.

He says: “When we started testing, the bodywork of many cars was just crumpling. Car makers have made huge advances in safety cells. Load limiter seatbelts help absorb the bigger loads on the occupants that follow on from the stiffer safety cells. And side airbags have been such lifesavers. That’s why we introduced the side-impact pole test.”

The next entry on the list of life-saving equipment? Avery says: “Automatic emergency braking has cut accidents by 40% and is already proving a real life-saver.”

How much extra weight we drive around with now, just in case we have a smash! CO2, performance, visibility and agility all suffer. It would be nice to think that when electronics can prevent accidents we could lose all the extra weight. But I wouldn't bet on it happening. Ooh. And could we drive faster, too?
artill 19 February 2017

I have never trusted NCAP. It

I have never trusted NCAP. It feels like they have another agenda. The fact that they say in the small print that cars of different sizes cant be compared, doesnt alter the headline effect of giving one car a higher rating than another. Its even more unequal now. we all want a safe car, but they will suggest a car is downright dangerous if it is missing certain electronic nannies no matter how well it actually copes with an impact. I suspect plenty of people have felt good about buying a 5 star small car thinking its safer than a 4 or 3 star large car. i am sure thats not the truth. Unless all cars can be compared the whole system seems pointless, as it is we cant even compare 2 cars of the same size from different years as they move the goal posts. They are fully aware that people misinterpret their ratings, but they use them to bully manufactures to fit stuff no one would buy if it were on the option list, after all, compare the number of cars where extra safety stuff is optional, and selected to the number of cars which have £500 plus spent on them to choose metallic paint.
fadyady 19 February 2017

Car safety has come a long way. The safety equipment that was once exclusive for the SELs are now found in city cars. The Euro safety guys have done a good job a much better job than the European emissions control due to whose ignorance, non professionalism and connivance with the car makers, Europe has become the laughing stock of the world for gross emissions irregularities.
View all comments (5)