BACK TO ALL NEWS
Currently reading: Bargain Bentley showdown: why they're more tempting than ever
UP NEXT
EV start-up Aehra to launch “ultra-premium” SUV and saloons

Bargain Bentley showdown: why they're more tempting than ever

With stereotypical German frankness, the Volkswagen Group’s 1999 report attributed the losses made by Bentley, its recent acquisition, to “unsatisfactory sales volumes”.

Back then, the Crewe firm struggled to sell 1000 cars annually. Yet last year, Bentley cleared £100 million and built a record 11,817 vehicles, almost half of which were Bentley Bentayga SUVs – a model unimaginable 18 years ago.

The revolutionary concept behind Bentley’s success under VW? Better cars. And now you can buy several of those better cars for less than £30,000. Yes, for the same money as a fancy Volkswagen VW Beetle, you can choose from Arnage, Continental Flying Spur and Continental GT. We’ve gathered one of each to explore the prospect.

This article was originally published on 30 April 2017. We're revisiting some of Autocar's most popular features to provide engaging content in these challenging times. 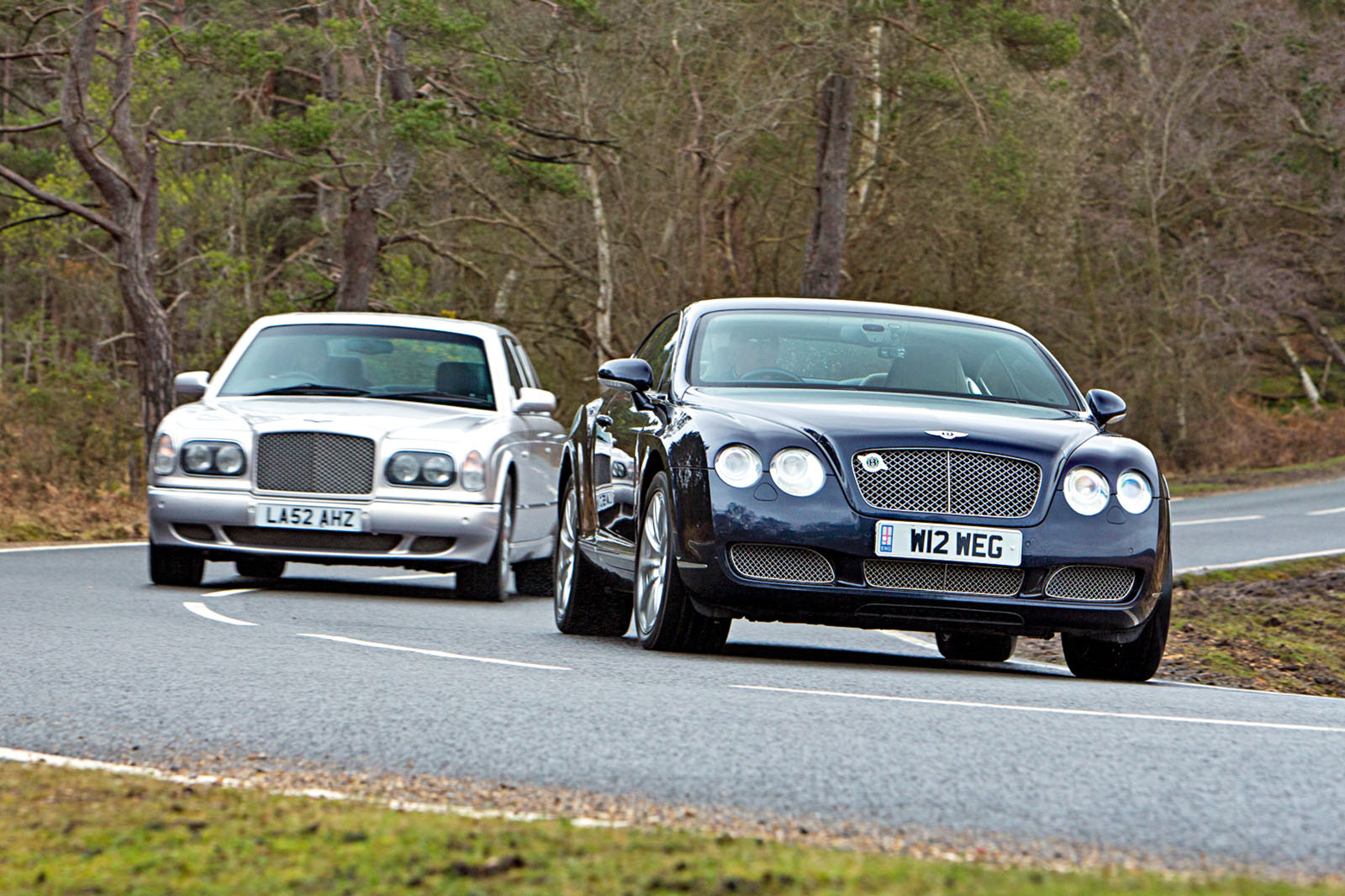 The Arnage saloon was box fresh when VW took over Bentley in mid-1998, but changes were soon afoot – partly because the launch model used a 350bhp 4.4-litre twinturbo V8 from BMW, with whom VW had clashed over the sale of Bentley and Rolls-Royce. Bentley’s ancient 16-valve pushrod 6.75-litre V8 returned in the turbo 400bhp Red Label in 1999, when the 4.4 was rebranded the Green Label. Both got stiffer shells, but the Red’s mammoth 619lb ft dwarfed the Green’s busier 413lb ft, dragging the 2520kg fourdoor’s 0-60mph time down to 5.9sec.

In 2002, the BMW lump was dumped, and lag-slashing twin Garrett T3s replaced the single T4 turbo on the venerable V8. The Red Label became the R, the hotter, firmer 450bhp T was introduced and further structural reinforcement increased rigidity while ESP helped tame the torque. Further power and sophistication came in late 2006 but, as with each of our trio, £30,000 limits us to early 2006 cars and older.

Which brings us to the 2003 Arnage R we’ve borrowed from Paul Heron at Keystone Cars, a family-run treasure trove of mainly noughties-era sports and prestige metal on the edge of the New Forest. Once a £150,000-plus motor, it’s up for £29,995, and that price includes an impressive service history, extendable six-month warranty and just 34,500 miles.

Embarking the 5.4m-long Arnage, I inhale a hit of Bentley plushness. The steering wheel whirs upwards to let me in, as if moved by an unseen valet. Extravagant amounts of walnut and leather will be themes for the day, and the Arnage’s cabin swims in both. Chromed HVAC organ stops and parchment-backed dials in the middle of the dashboard are let down by the niggling plastic of BMW-sourced buttons below, but this is still high luxury, and to have it for £30k feels like getting a haircut at Alfred Dunhill through Groupon.

You sit high on a squashy armchair, peering over the bulging bonnet from which a soft rumble emanates. The old General Motors four-speed ’box is in keeping with the engine’s surfeit of torque, shifting lazily and gently, its attentiveness slightly raised in Sport mode, when the adaptive dampers stiffen, too. That’s relative, though. The Arnage still rolls generously by modern standards, which makes it all the more shocking when you open the taps and, after a moment of lag, all notions of gentility are quashed by mighty, unrelenting acceleration. Between 2000rpm and 4500rpm, there’s an irresistible onward surge, the Arnage seemingly straining at the leash despite never emitting more than a distant but robust growl. 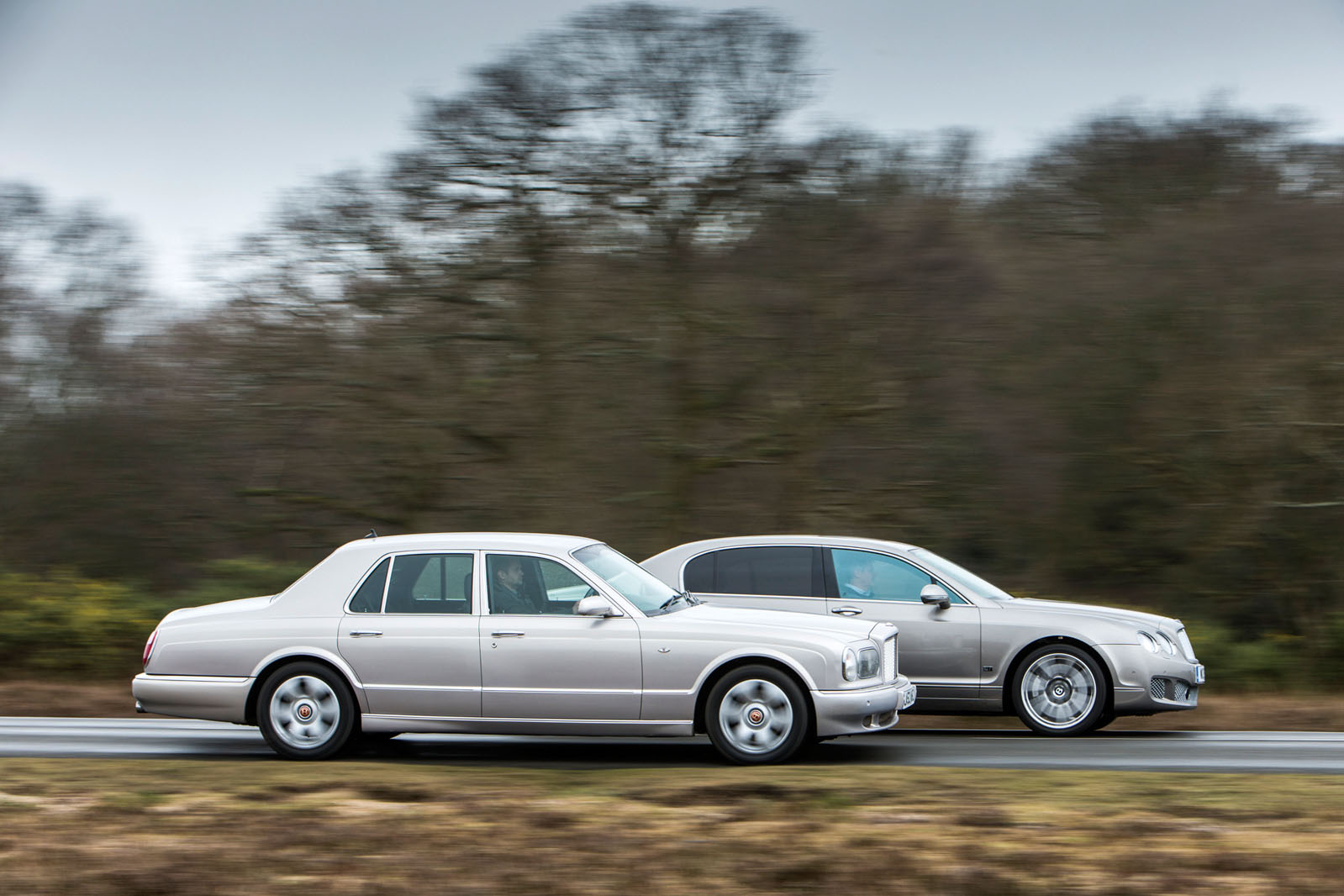 There’s a bit of niggle to the ride on anything but a perfect surface, yet the plump seats mean it’s heard more than felt, with only lateral ridges causing any real upset. Wind noise is apparent but acceptable. Light steering offers little feedback but conducts the nose with surprising responsiveness, although wet conditions prompt hesitation through corners as the rear, with no limitedslip differential, sometimes struggles for traction. The brakes remain reassuringly effective, though.

Despite its helping of Teutonic tautness, the Arnage still feels very much an English Bentley: big, soft and stately, but with a shocking turn of pace from a charming brute of an engine. Our pair of Continentals grew from the £1 billion VW had invested by 2003: the prolific GT launched that year, the Flying Spur in 2005. Each has VW Phaetonsourced underpinnings and a twinturbo 6.0-litre W12 distributing its 552bhp and 479lb ft via a six-speed ZF auto transmission and Torsen four-wheel drive that nominally splits the torque equally but can send it all to either axle. Both hit 60mph in about five seconds and bother 200mph.

Their owners were found via the helpful Bentley Drivers Club. Regional chairman David Asker-Browne’s 2004 GT has covered 85,000 miles, but aside from a few creases on the front seats, you wouldn’t know. It’s otherwise spotless, has a full Bentley history and still comes in a grand or two below budget. There are design touches and materials familiar from the Arnage, but the GT’s cabin is distinctly sportier, without losing that clubby feel. The surfaces feel that bit more robust, and although numerous plastic buttons persist, they are of higher quality. The sat-nav is outdated but trumps the Arnage’s pop-up Alpine system. The driver’s seat is lower, more enveloping and more adjustable, and the rear seats are tight but usable.

The W12 might not produce the V8’s torque, but it delivers the same relentless thump of energy. Its power band extends much higher and lag is less pronounced, but so is the soundtrack. It gives off a muted, booming roar rather than a growl. Steering wheel-mounted paddles bring a delayed response, but the changes themselves are slick, and auto mode is unobtrusive, bar the occasional unexpected shift. 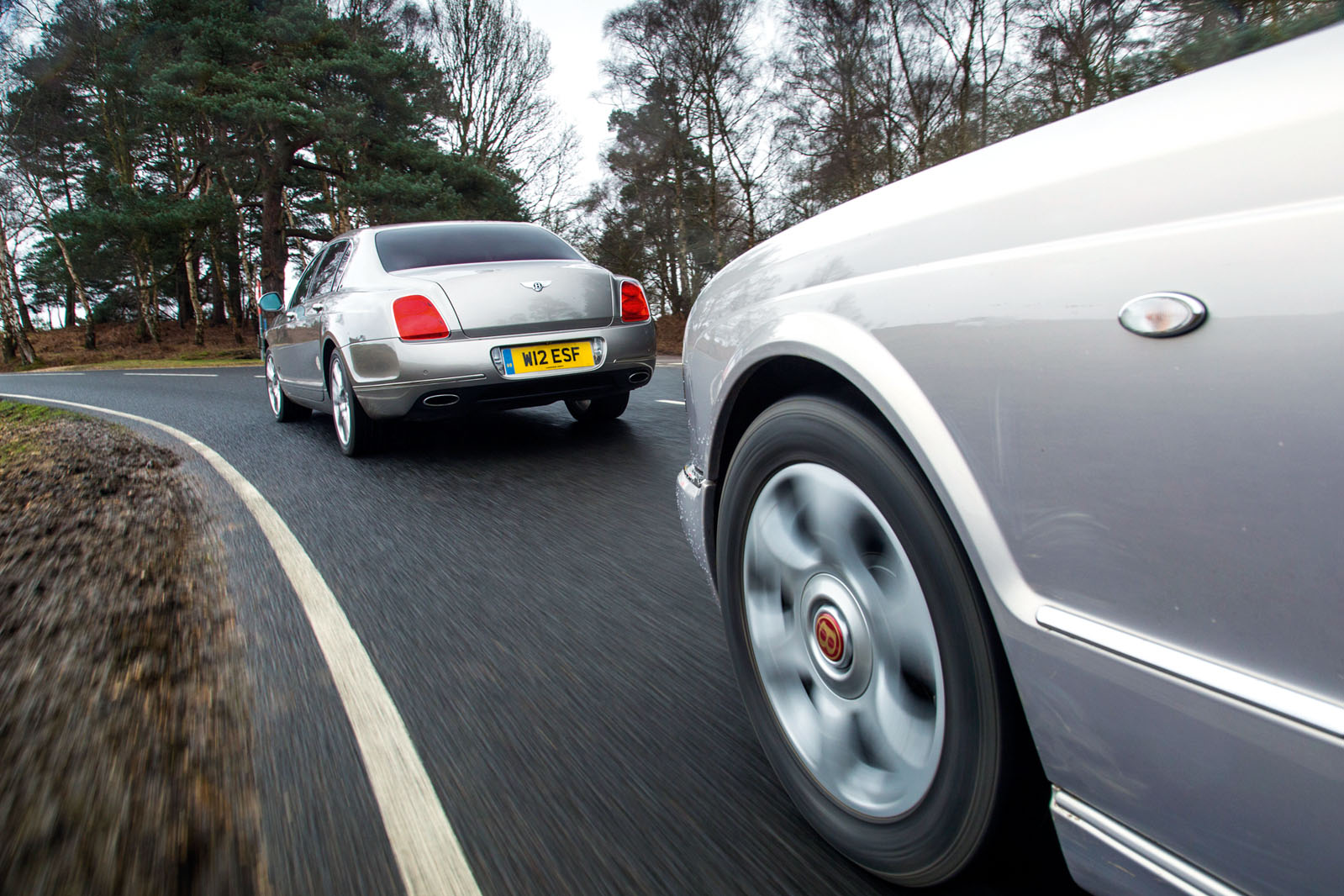 The GT’s steering is much heavier, too, but apart from a little hesitation on turn-in, the GT is a cinch to place, even on narrow, snaking roads, when roll is tidily contained in the stiffer suspension modes and generous grip lends healthy front-end confidence, even with that huge engine mounted so far forward. The air-sprung ride drew complaints at launch – perhaps more was expected at £110,000 – but aside from the odd hiccup over sharp edges, I found it happily gripe-free. In fact, any complaints about the GT are made for the sake of completeness because, overall, I found myself quietly bewitched by this car and the sporting luxury it offers for such reasonable money.

In truth, club member Edward Fort OBE’s utterly pristine 13,000-mile 2011 Flying Spur is beyond our budget – especially as it’s a specced-up member of the indulgently trimmed ‘Series 51’. But mechanically, it’s very close to the early cars that now start at an incredible £22,000. The cabin is very similar to the GT’s. Rear cabin packaging is better than in the Arnage: both offer acres of leg room, but where occupants of the older car mainly get a faceful of D-pillar, those in the Spur have glass, there are more comfort controls and the boot is much bigger.

Despite their common ground, there are interesting and even surprising dynamic contrasts between the GT and 130kg-heavier Spur, which has an extra 327mm of wheelbase. The larger car palpably taxes the engine more, although it’s still plenty quick. It also resists understeer well, even in streaming conditions. It actually offers more responsive turn-in and the helm is more reasonably weighted. The secondary ride is generally busier than the GT’s, but find a smooth surface and there’s a soporific comfort to be had when cruising.

Both Continentals are a league above the Arnage for quality and dynamic ability. If, however, patrician character is your priority, it’s the older, more idiosyncratic car that delivers. Whichever you choose, there’s huge indulgence to be had for the price with any of these three. Personally, I’ll take a £25,000 Conti GT and a monogrammed parking space at the local petrol station.

A work colleague had a

A work colleague had a Continental GT from new. After 4 years and service bills that had run into 5 figures he said goodbye.
jonboy4969 10 July 2020

He clearly couldnt afford it,

He clearly couldnt afford it, so why waste his money buying it, he would have been fully aware of the cost of servicing these cars.We have a 2001 Bentley ARNAGE, LWB, it is the very last 2001 in the UK, there were only 11 made that year, 5 for the UK, and ours is the only one left, we know what a full service will cost, £5,000 minimum, we replaced the grill last year at £3,000+, £1,600 for five new Tyres this year, and so so on, but for what it is, you cant beat it, Quiet, fast, comfortable, so much room, Toys, (for the era) and that air of supreme luxury.......Better than any Taxi Mercedes and certainly better than anything from Goodwood.

Flying Spur for me, though it has to be said that the interior on my second choice Arnage is just fucking stunning. My favourite interior among mainstream cars is the Rover 75, just because it has an air of scaled-down Bentley about it. For me Bentley and Rover are first and second in the history of the British car industry.
pauld101 2 May 2017

A case of the victors rewriting history, perhaps?