BACK TO ALL NEWS
Currently reading: First Bentley EV set to replace Mulsanne as firm's range topper
UP NEXT
Lotus Emira vs Porsche 718 Cayman

Bentley will begin testing its first EV later this year, and it's likely to be the priciest model in the line-up, CEO Adrian Hallmark has revealed in an Autocar Business webinar hosted today.

While Hallmark refused to be drawn on whether the car, which will go on sale in 2025, will be a high-riding saloon or an SUV, both of which have been rumoured, he did confirm that it will occupy a new price point for the firm while drawing reference to the old Mulsanne limousine.

Confirming that the EV will be set apart from the current line-up on price, he said: “Today all of our products are in a very tight price band. So I can say that we would like to either go up or down in order to exploit the brand further in terms of its potential.”

Given the car is set to feature cutting-edge technology as well as have a significant battery range, it's highly unlikely that it will be priced below the Bentley Bentayga SUV, which starts at around £155,000. With Bentley’s current range topping out at around £230,000, a price closer to the Mulsanne’s near-£250,000 starting price is expected, hinting at its likely halo positioning in Bentley's line-up as it prepares to launch five EVs by 2030.

Hallmark described the EV’s underlying technology as signed off, and said the interior design was 95% complete and exterior design 80-85% ready “with some work to do to further improve what we've already decided.”

He confirmed that testing will begin later this year, as well as saying that styling models of all five Bentley EVs exist, suggesting they require only refinement as they edge towards production by the end of the decade.

Talking about the styling of the 2025 car, Hallmark stressed that the EV will have its own unique look and packaging, rather than evolve from current designs.

He said: “It's an incremental product, so it will exist alongside our current cars. We're trying to shape a segment and game-changer, not just an electric version of what we already have. It will be more progressive than some of our current designs. Not radical, but with hints that signal we're entering a new era with this vehicle.”

Ground-breaking aerodynamics are likely to be a key feature of that, Hallmark revealed, adding: “Let’s be clear: the design will look like a Bentley, feel like a Bentley and go like a Bentley. But yes, the overall aero efficiency will be a step change from our current cars. It will be among the very best for efficiency, no question. It has to be, because there are inherent weight and therefore efficiency issues with battery packs that we will overcome.”

He confirmed that while there are no plans to reduce wheelbases on EVs, the firm’s designers are working to slightly reduce the width of its cars to improve efficiency.

However, he stressed that many familiar Bentley qualities, particularly in terms of interior design and the overall luxury-focused driving experience, will still apply.

“In terms of the effort we go to in order to choose the materials, the way we design them and the way they go together for an overall aesthetic, as well as the comfort and the features that we apply in our vehicles, we do believe we stand apart,” he said. “We will take another leap forward when it comes to electric vehicles.” 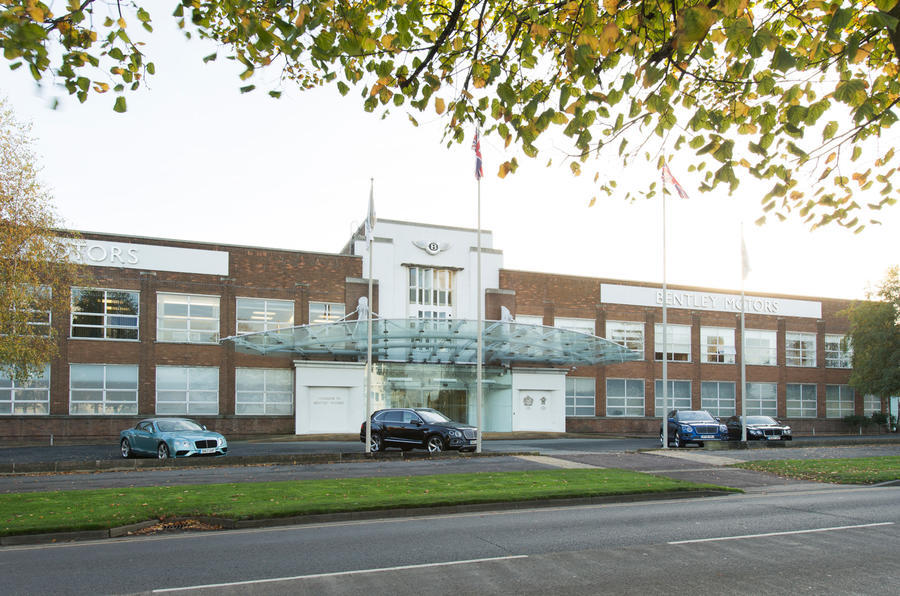 Hallmark also suggested that Bentley is looking at alternative methods for charging its cars, including induction charging or automated systems that hook up to the car without the need to be manually plugged in.

“The first thing to acknowledge is that most of our owners will live in houses where they can charge at home, so the restrictions of public charging are unlikely to apply,” he said. “We’re working with partners to look at higher-powered charging solutions and hands-free solutions, whether that’s inductive or robotic. They can be done without huge cost and can remove some of the hassle.

“Five years ago, the efficiency of inductive charging was so low that most people gave up on the idea of it. Now we know that, so long as you can be very precise, you can get to 90-95% of the efficiency of a plug, so that’s interesting, especially if it’s linked to autonomous parking to guide it into position.”

Hallmark also talked up Bentley's chances of beating last year’s record-breakings sales of 14,659 cars, saying: “Since 2003, the number of high-net-worth individuals with more than a million dollars of cash available to spend has tripled. They may not all want to buy a car with that money, but it's clear some will, and that the number of potential customers is growing rapidly.

“Of course we want to capitalise on that and there's room to grow. Our issue is capacity. Our paint shop, for instance, couldn’t run for another minute: it’s operating every minute it can. So it’s unlikely with our current generation of cars that you will see a significant lift. But longer-term, the potential is there.”