BACK TO ALL NEWS
Currently reading: Why Shell's oils and fluids are still vital in an electric car
UP NEXT
New 2023 Audi A4 Avant undergoes tests in the Alps

Shell is working on new formulations of battery fluids as a key component in an important next step in battery development for lighter, longer-range and more affordable electric cars.

The world’s biggest supplier of automotive lubricants (see below) is using Formula E racing as a test bed for its new E-Thermal Fluids and E-Transmission Fluids, including developments in direct, cell-cooling systems tipped to leapfrog the established water-glycol indirect cooling systems, in a bid to become the industry standard.

“With direct cell-cooling, the OEM can design a more compact battery with a higher power density and the overall benefit of power-to-weight is better,” said Chris Dobrowolski, Shell’s associate technology manager for E-Fluids.

In direct cell cooling (also known as immersion cooling), individual lithium ion cells inside the battery pack, and the busbars and connectors that link the cells together, are immersed in dielectric (insulating) fluid to control heat build-up during charging and discharging.

Because the fluid is an insulator, it can also suppress cell-to-cell thermal runaway – better known as a fire.

Currently, direct-cell cooling is a cutting-edge battery technology and limited to a handful of low-volume, exotic supercars, like the McLaren Speedtail and Koenigsegg Regera, with its battery designed by Rimac. 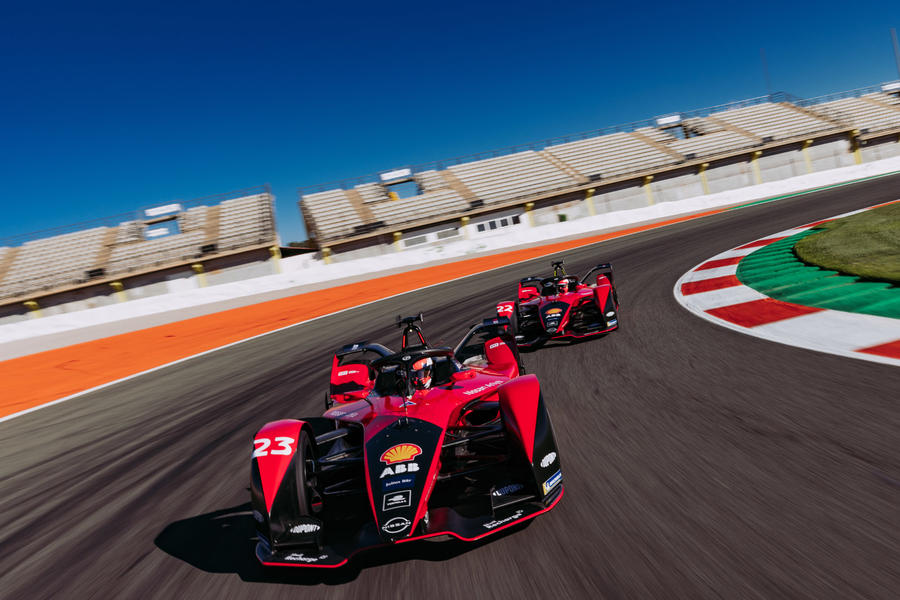 But Shell’s understanding is that many manufacturers are looking at direct-cell cooling as a breakthrough for more affordable, volume-production models.

“Most leading OEMs are assessing this option or are already in development of such a technology,” said Dobrowolski.

Direct cell cooling would unseat indirect cooling, the industry’s current favourite for mid-priced and premium models, with their pumped, radiator or air-conditioning based water/glycol system.

Tesla, for example, uses a patented water/glycol system channelled through a cooling tube in contact with each cell, while Audi and Chevrolet link their battery modules to a heat-sink plate cooled by water/glycol.

The hardware for this cooling adds weight and complexity. A further risk is that the glycol, the same alcohol-based antifreeze liquid used in combustion engine coolants, can contribute to a fire if cells catch alight.

However, there are economic benefits to it, as air-cooled batteries are cheaper and so appeal to more affordable models like the Nissan Leaf or Renault Zoe.

Shell’s E-Thermal fluid is a synthetic dielectric oil with very low viscosity for the best thermal properties, zero impurities to avoid interfering with the electrical performance of circuitry and a low number of additives.

Such fluids aren't themselves new technology, being well established as coolant for banks of computers in data centres, for example, but the rapid pace of development of automotive batteries is supercharging their development.

But how far manufacturers are prepared to go with a new generation of battery designs remains to be seen, although learning in Formula E, where the batteries are cooled with Shell’s E-Thermal fluid, will help. 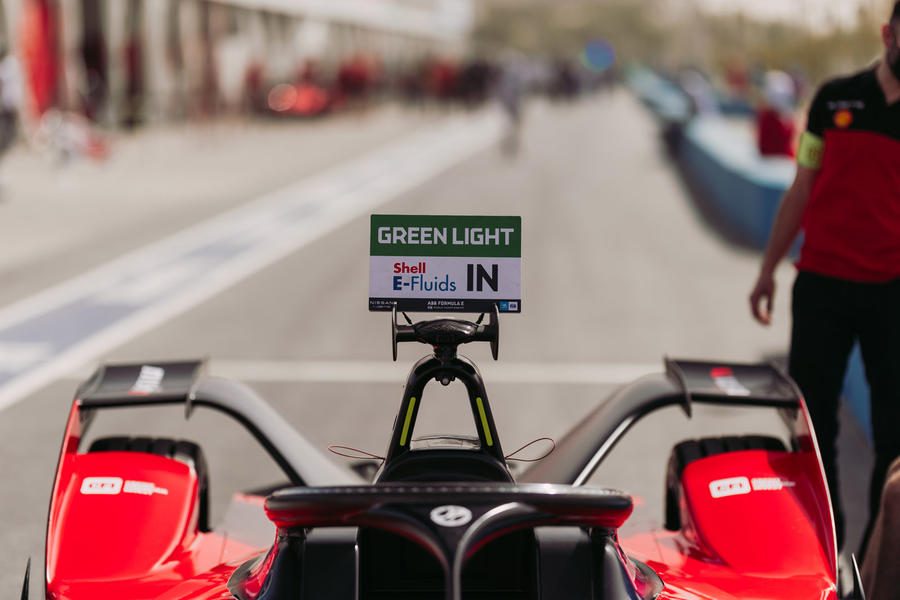 “In many of these future road car systems, we're still at the design feasibility stage, and it’s unclear where each OEM will go,” said Dobrowolski.

Ironically, given the green credentials of EVs, a switch to widespread direct cell cooling would increase the volume of hydrocarbons in each car.

“Depending on the size and output of the battery, the volume needed in each vehicle could be between something like nine to 15 litres of fluid,” said Dobrowolski.

That said, the fluid is sealed inside the battery pack and designed to last the life of the vehicle, typically 15 years or 185,000 miles. It can also be recycled.

Being synthetic, Shell’s E-Fluids are hydrocarbon-based but produced from natural gas through the gas-to-liquid (GTL) process, rather than refined from crude oil.

A key advantage of synthetics is their lack of sulphur content, which is extremely important in electric motors, whose copper stator windings react adversely with sulphur.

Shell’s other main E-Fluid is for electric motors/transmissions, where Formula E is also accelerating development. The race motor speeds can reach 30,000rpm, whereas a road car’s motor maximum is more in the range of 10,000-20,000rpm, which quickens the learning process.

Moisture content is something Shell is learning about, too, since motors run at lower temperatures than engines. Although there are hot spots in a Formula E motor of around 180-190deg C, the lubricant itself doesn’t heat above 100deg C, which means too low a temperature to boil off excess water.

In a lighter-duty electric road car, the motor temperatures are even lower, in the 60-80deg C range.

“So we have to blend the base oil and additives to deal with very different usage: high instantaneous torque, a single gear and low temperatures,” explained Dobrowolski.

There’s also less volume of E-Fluid, about 4.5 litres versus 6 litres in a dual-clutch automatic transmission.

The formulations of E-Fluids are very similar to conventional gearbox oils, with similar base oils, but the blend of additives is different, reflecting the higher motor speeds, lower temperatures and fewer gears.

Shell says the trend is already towards lower viscosity motor/transmission oils for electric cars, typically around 5-8 centistokes, similar to automatic transmission fluid, although there is a limit to how low they can go without losing some of their protective properties.

Lubricants and cooling fluids are very much an unsung part of the car industry, yet they're huge business and will play a significant role in improving the breed of the electric car of the future.

It's quite the result for something as unfashionable as a hydrocarbon. 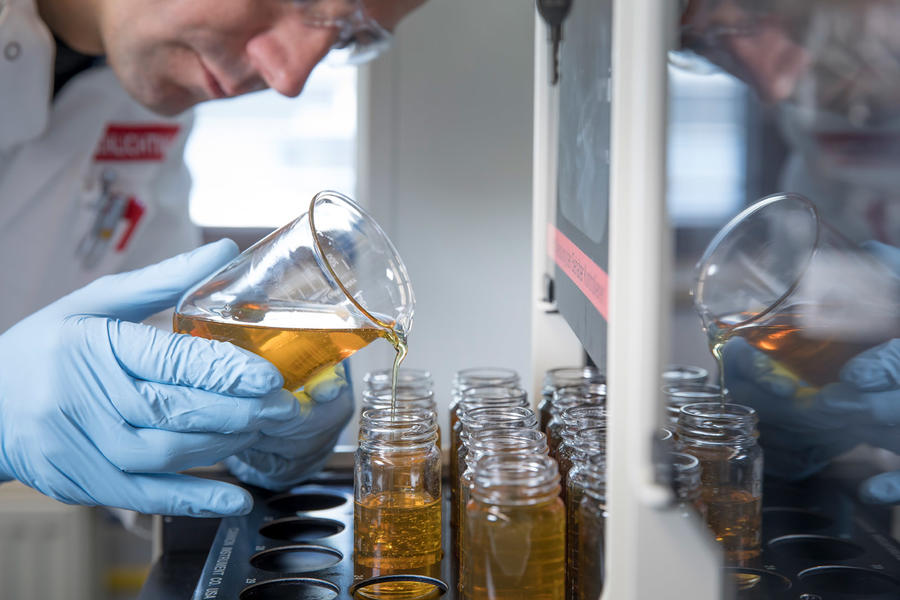 What does the future hold for Big Oil in an electric world?

Shell’s automotive lubricants business is a global powerhouse and for the past 15 years has ranked global number one in consumer and commercial automotive, according to Kline market research.

And the switch to electrification will have a significant impact on this automotive business, which sold 2.94 billion litres in 2020 globally, making it a multi-billion-turnover business.

Considering that the UK alone has 32 million ICE vehicles on the road and each needs an annual oil change, the switch to zero oil-change EVs will lead to a long-term decline in that business.

However, it will be a progressive decline over decades well past the 2030 ban on new petrol and diesel cars, and there will be demand for conventional oils decades after that.

“One thing to remember,” said Dobrowolski, “is that we aren't just giving up our conventional business overnight.”

So as the new car market shifts to EVs, Shell will rebalance its refining capacity and blending facilities in favour of E-Fluids.

For example, its E-Transmission Fluid is very close to current transmission oils in chemical make-up, so the basic industrial plant will continue in production.

Where Shell will need to invest is in filtering and cleanliness during the process, as electric motor fluids are less tolerant of impurities.

“Assembly plants are likely to need new clean rooms for the filling operation,” adds Dobrowolski. “This is a challenge for everyone in the industry.”

Log in or register to post comments
ac555 13 April 2022
Meanwhile Shell is still investing vast sums in developing new oil fields which, if exploited, will make the planet unlivable for a huge swathe of humanity.
LP in Brighton 13 April 2022

This reads a bit like an advertorial for Shell. I imagine that all oil companies will be developing such products.

No doubt a key requirement of any coolant would be to ensure limited life, so that regular (and expensive) fluid changes would be needed to ensure profitability!