BACK TO ALL TOP 10s
Currently reading: Top 10 best lightweights and track day specials 2022
UP NEXT
Luxury

There's little on four wheels as fun as a track-day special – but which lightweight comes out best in our top 10?
Open gallery
Close

It is within this class of the ultra-niche sports car market that you can find power-to-weight ratios to match a modern hypercar – but made available at a fraction of the price.

Considering the world-class handling delicacy, precision, tactile involvement and explosive performance they provide, these cars might better have been surmised in a class simply titled ‘dream machines’ – and yet dreaming isn’t always necessary as the buy-in can be more affordable than you’d expect.

These are the lightweights; sub-one-tonne, back-to-basics drivers’ cars of an old-school analogue appeal you’ll find almost nowhere else – and done nowhere better than right here in the UK.

Though you might not recognise it at first, Somerset-based Ariel thoroughly revised the now-nearly-twenty-year-old Atom for 2018 – although it waited until 2019 to lend us a car for the full Autocar road test. As far as waits for Atoms go, however, that’s nothing to complain about, with the order book for this car now extending to almost three years.

This tubular-framed rocketship has benefited from ground-up changes to the suspension hardware and geometry, chassis dimensions, wheels, engine and interior. The car’s powertrain comes from Honda, just as it did before – although it’s no longer supercharged but turbocharged, being the same 316bhp four-cylinder engine found in the Civic Type R. In fact, only the brake and clutch pedals, and the fuel cap, are carried over from the old Atom 3.5.

The results are extraordinary. Ariel claims 0-60mph in 2.8sec – and full of fuel and with two passengers onboard, our two-way 3.2sec clocking gives plenty of credibility to the idea that, on an absolutely perfect run, you might just reproduce that. Whether you do or no, frankly, you’re in true blue supercar territory for outright speed here; the new Atom is only 0.1sec slower from 30- to 70mph in 4th gear than an Aston Martin DBS Superleggera, and its 6.9sec 0-100mph clocking is almost a full second quicker than that of the mighty Nissan GT-R.

But it’s the attention to detail that hooks you into the Atom driving experience. The positioning, weight and response characteristics of the control are just so, and the Atom somehow filters out the distracting elements of the road beneath you and only sends you pure, immediate messages. It’s wonderful and unsurpassed for involvement and reward. Just don’t forget your helmet. 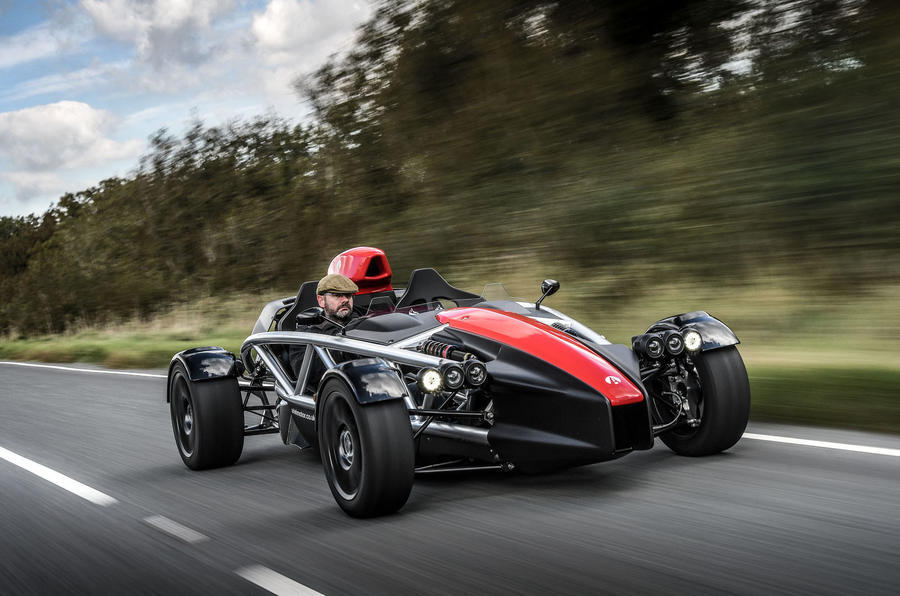 There would very likely be no market for lightweight sports car at all if not for the car whose bloodline flows into the indefatigable Caterham Seven. The original Lotus Seven might even have been Colin Chapman’s greatest gift to the motoring world, and when Caterham Cars bought the rights to Chapman’s little lightweight special from him in 1973, it founded a business that has been indulging and nurturing true diehard driving enthusiasts ever since.

The 310R hits a sweet spot in Caterham’s current range of Sevens – one brought about by fitting high-performance camshafts and revised electronic mapping to the 1.6-litre Ford engine in the 270. The resulting 152bhp is all you really need in a car that weighs 540kg, and fabulously communicative steering allows the driver to work this tiny but wonderfully direct and immersive chassis.

There are more expensive, quicker versions of the Seven and, equally, you could buy one of the current (and superb) crop of hot hatches for the money Caterham asks for the 310R. But when it comes to balancing thrills, involvement and affordability, there is arguably nothing that can match it. 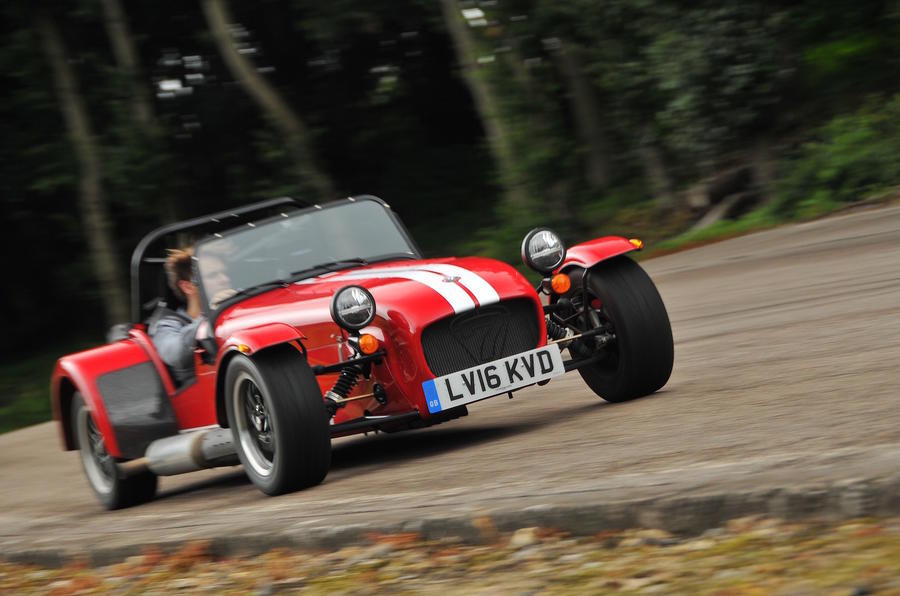 How does a car with barely a trace of luxury or refinement in its DNA gain a five-star road-test rating? The answer, of course, is by purveying greater enjoyment than arguably anything else on four wheels, and by bringing something so fresh and different to its particular market that you simply can’t ignore it – which is precisely what the Nomad, Ariel’s dune-buggy-like second model line, achieved when it was introduced in 2014.

On road, track or – best of all – loose ground, the Nomad is sensational not only in its technical prowess but the manner in which it doles out its stonking performance. There’s also incredible ride quality here to match amazing long-travel body control, and what little there is of the Nomad is beautifully constructed.

For the money – and perhaps much, much more – there’s nothing to touch it if your priority is pure driving pleasure delivered slightly differently. 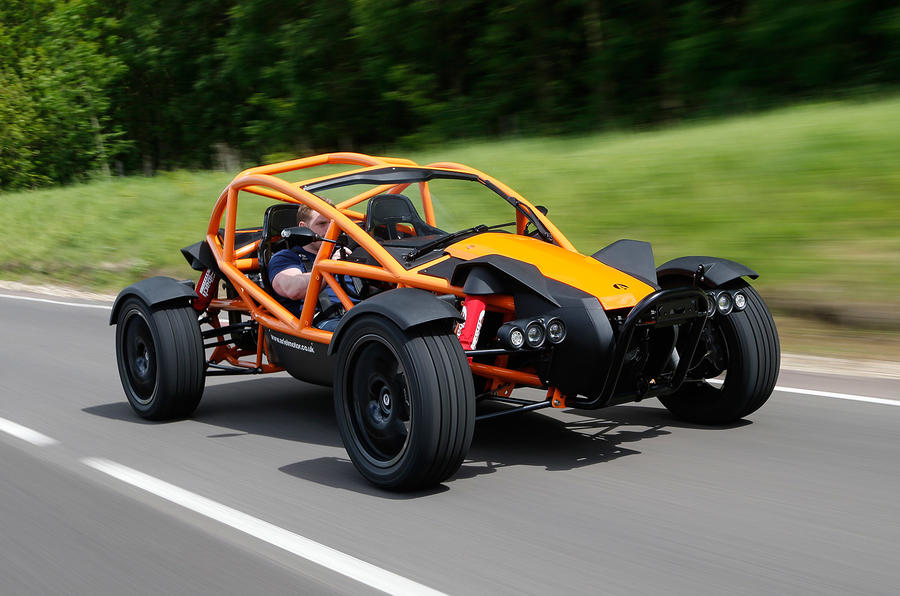 Really, who needs a passenger? Especially when you can have a car like the stunning BAC Mono, which feels like it’s been driven straight off a formula racing grid and offers a driving position that brings new meaning to the word ‘pure’, in a package that’s somehow entirely road-legal.

The BAC boasts a similar architecture to the Elemental further down this list, with double-wishbone suspension, a mid-mounted 2.5-litre Ford engine and a six-speed sequential gearbox driving the rear wheels, but the car’s single-seater origins up the wattage of the driving experience.

The economy of movement required to cover ground at astonishing pace truly is spellbinding, although the Mono is better still on the track, when its ultra-precise suspension can operate without hindrance from road imperfections. It’s as intense an experience as they come – although it comes at a considerable price – and it’s quite stunningly wrought with plenty of carbonfibre. 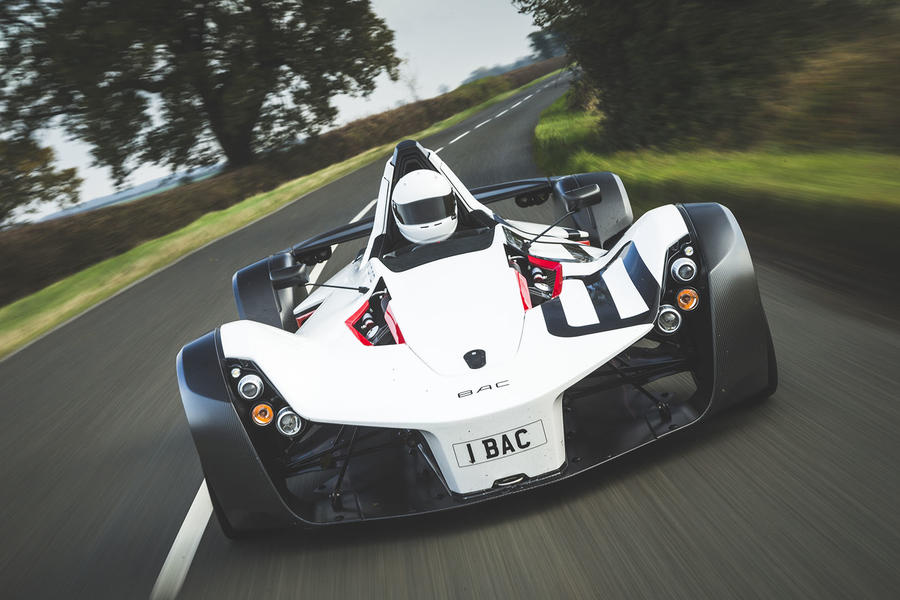 If it is authenticity you crave, then names don’t come more ‘motorsport’ than that of Italian outfit Dallara. The firm’s chassis expertise can be found in Formula 1, IndyCar and Formula E as well as a host of other high-profile series, and it’s that expertise that has been distilled into road-going form with the pretty Stradale.

What we’re dealing with is a screenless barchetta with a 395bhp Ford (yes, again) 2.3-litre Ecoboost engine driving the rear wheels through a six-speed manual gearbox. Dry weight? 855kg. Maximum downforce? 810kg, with the huge rear wing in place.

To drive, this is a ferociously serious machine and one with superlative unassisted steering and a chassis that’s arrow-true – and one that can put you in a downforce-defined mode of full-immersion fever on track that few other cars can equal. The brakes could be better and the engine more stirring for the money, but the Stradale is brilliant nonetheless. 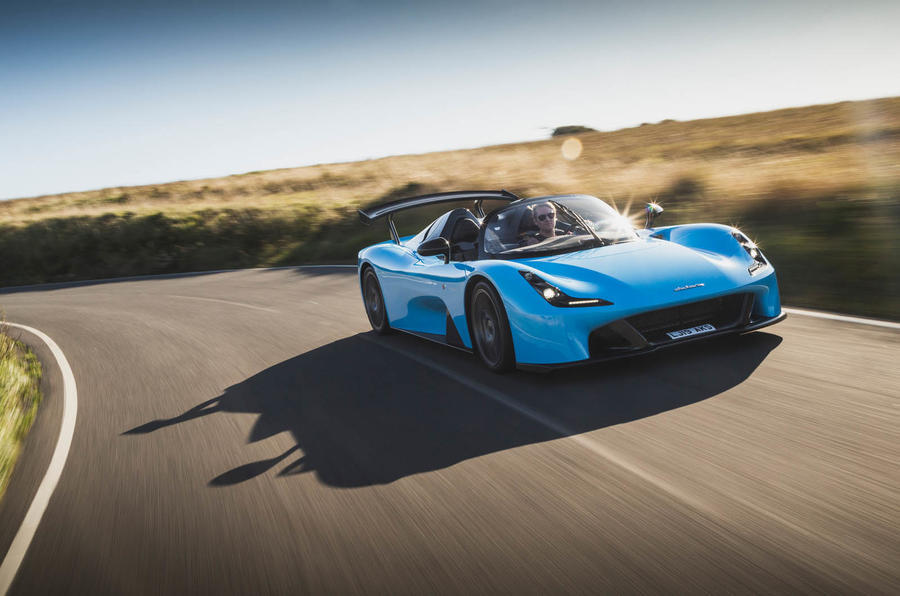 Start with a carbonfibre tub. From it hang double-wishbone suspension with in-board spring-and-damper units at the front axle. Mount a Ford Ecoboost engine behind the passenger cell and have it drive the rear wheels through a six-speed Hewland gearbox. What you now have is the British-built Elemental RP1: a 580kg road-racer with 320bhp and 200kg of downforce at only 100mph.

Performance and feedback are here in abundance, but the RP1 also manages to just about justify its considerable price tag with the quality of its fit and finish and the palpable care and expertise of the chassis set-up. 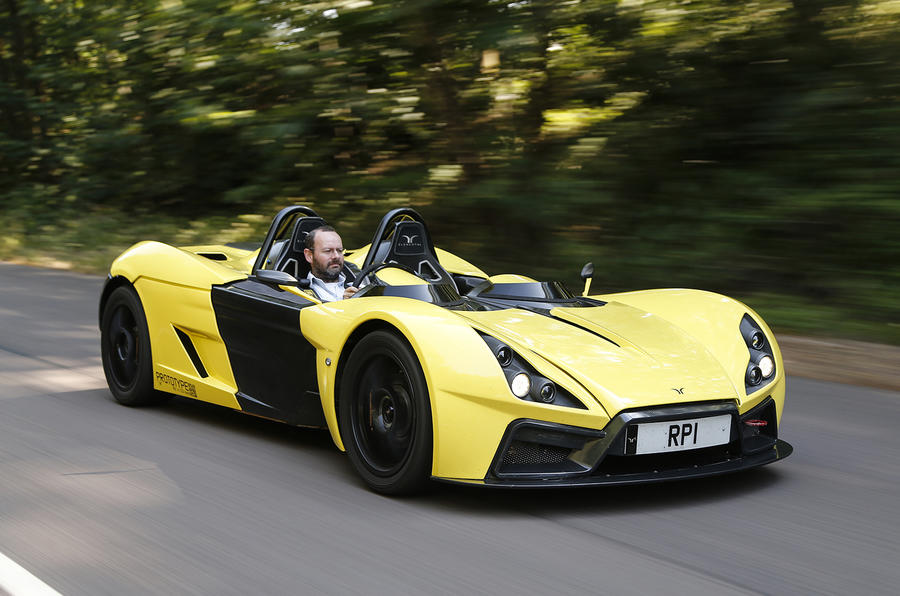 Let’s talk about the 3-Eleven ‘430’. It’s the ultimate road-going version of this track-day special from Lotus, with 430bhp from a 7000rpm 3.5-litre supercharged Toyota V6 and a rear wing mounted 50mm higher than on the ‘standard’ car.

In the name of purity, there are no doors (well, not that open, at any rate), Michelin’s sticky, semi-slick Cup 2 tyres at each corner, no stability control and a manual gearbox. It’s a case of supreme pace and purpose meet trademark Hethel precision, with a surprising dose of playfulness thrown in. 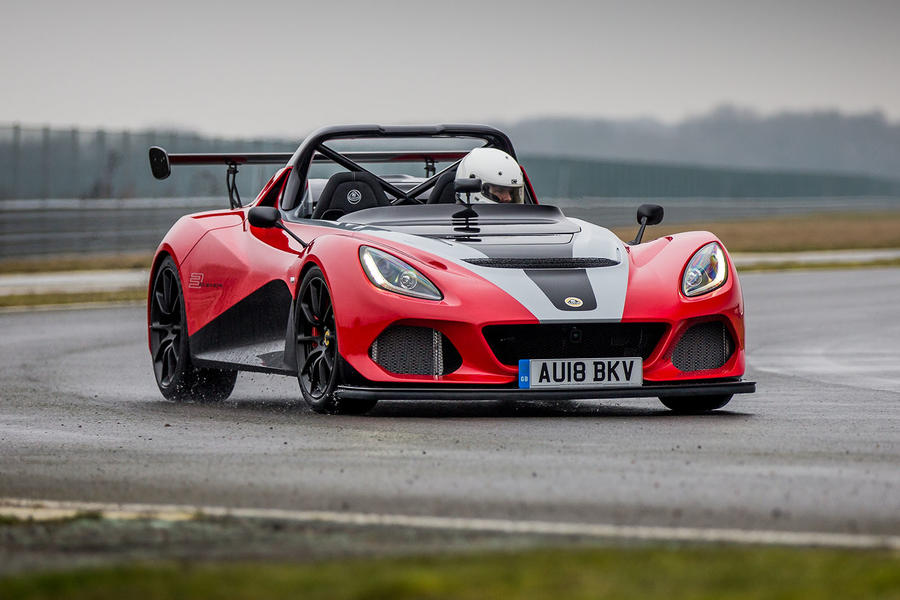 Black Country outfit Westfield might have successfully diversified into autonomous mobility pods, but the core offering since 1982 has been lightweight sports cars you can build yourself. And the hook? Supercar bang-for-your-buck that even Caterham can’t touch.

That’s the case with the new Sport 250, which uses a 2.0-litre Ford Ecoboost engine tuned to 247bhp – in a car weighing just 670kg. In fact, this is a proper humdinger of an engine that goes a long way to making up for a slight imprecision in the chassis (though the set-up is eminently tuneable) and a slight shortage of all-round dynamic finesse. Get it set up right, however – or rather, tune the handling to your liking – and the car could be damn near as good to drive as anything else here.

It’s not for the faint of heart, the Sport 250, but it gets your heart pounding for the right reasons – most of the time. 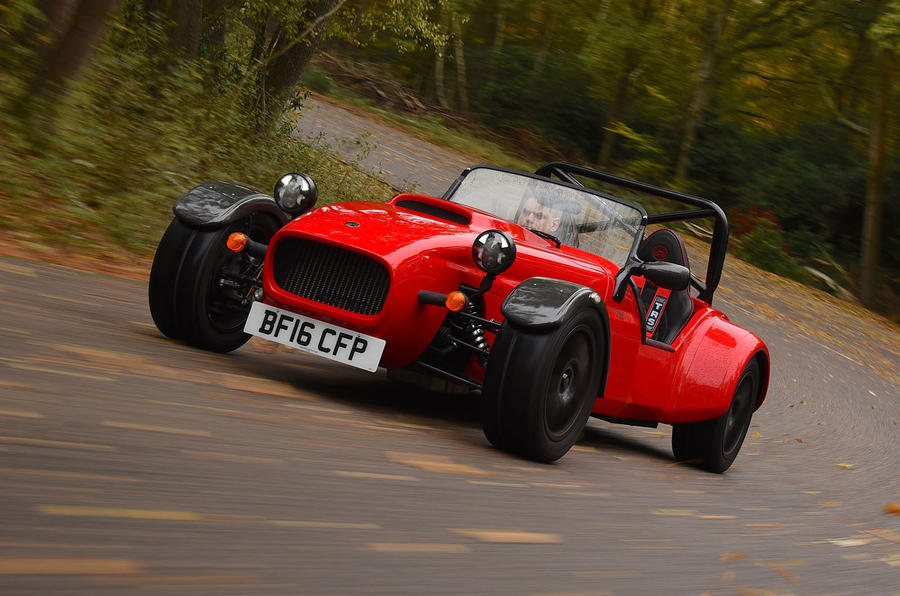 Another Ford Ecoboost engine? That’s right, but with so much power in a light, compact and affordable package, that’s no surprise.

Founded by exiles from both Lotus and Caterham, Zenos Sports Cars was set up in 2012 and launched the E10 in 2015, to a warm reception from the press. Business began encouragingly, although the company changed hands in 2017 after entering administration following a string of cancelled export orders, and is now owned by a consortium associated with AC Cars.

The Zenos E10 can be had for just £27,000, which is peanuts for a car of such singular focus and execution – and the more potent and focussed E10S and E10R offer more of both. Materials quality isn't quite a match for some of the cars on this list, but there’s a real maturity to the dynamics of the Zenos and, as for the real-world pace, it wants for very little indeed. The car is lacking a little in dynamic charm compared to some of its rivals, but massively rewarding to get stuck into on the right road. 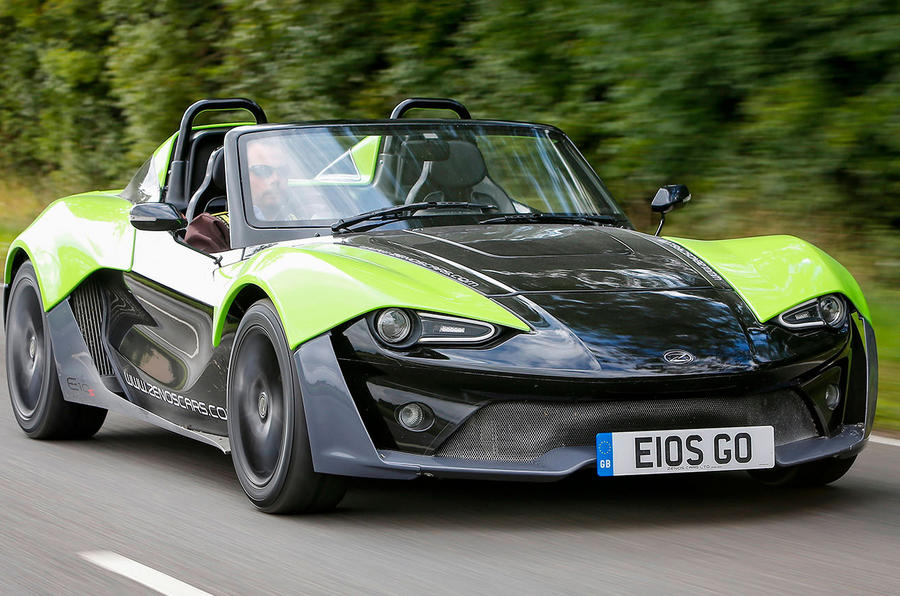 Don’t let your eyes deceive you - this is, in fact, an all-new version of Morgan’s iconic and age-old roadster. The clue is in the name, really. Where older cars were badged ‘Plus 4’, this is a ‘Plus Four’. It’s a subtle change in nomenclature, but one that hints at the far more significant overhaul that has taken place beneath the little Morgan’s typically gorgeous exterior.

The steel ladder-frame chassis that was introduced with the Morgan 4/4 back in 1936, and which underpinned all of the firm’s ‘trad’ roadsters for the following 84 years has been replaced by a new aluminium one. Not only is it significantly lighter and stiffer than before, it houses a new BMW-sourced 2.0-litre four-cylinder motor, too. This develops 255bhp and 258lb ft when paired with a six-speed manual ‘box - plenty in a car that weighs just over a tonne.

It’s a funny car to drive. It’s certainly quick, but its ride and handling balance isn’t quite what you’d call sophisticated. The electrically-assisted steering is overly light and lacking in feel, and its softer springing makes it susceptible to pitching under braking and acceleration - so it can be tricky to place on the road if you’re not focussing. It’s by all means entertaining, involving and massively charming, but it lacks some of the dynamic polish we’d hoped would come from its new underpinnings. 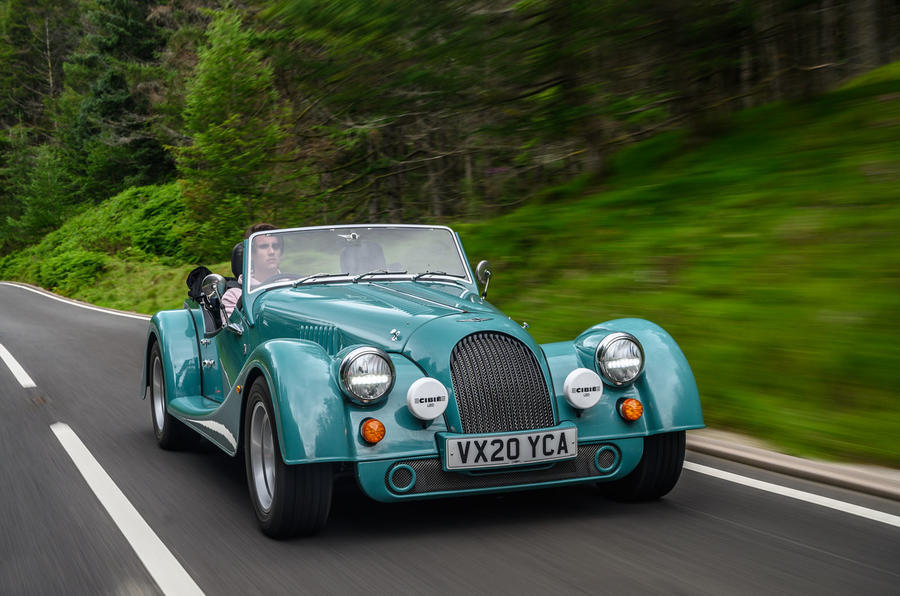