BACK TO ALL NEWS
Currently reading: Caterham 620R vs Caterham 160: Battle of the Sevens
UP NEXT
2025 Mercedes-AMG EV sports saloon to rival Porsche Taycan

Caterham 620R vs Caterham 160: Battle of the Sevens

Which is the better Seven, the £50k 620R or the £15k 160? We test both ends of the Caterham spectrum to find out
Open gallery
Close

When we compare one car with another, we usually like to save the verdict for the end. It gives you something to read and us something to say. But there really doesn’t seem much point here.

So if you’re ready, I’ll give it to you straight: a Caterham Seven 620R is more exciting to drive than the new Caterham Seven 160. Not much of a revelation, is it? One is powered by a 660cc engine from a Suzuki microvan; the other has the power-to-weight ratio of a McLaren P1. One would need to try hard to drop a Renaultsport Clio down a quick road; the other would make a Bugatti Veyron driver wonder which way it went.

So what are they doing here? We rarely compare cars from the same manufacturer, let alone the same model line, and given that the 620R has almost four times the power of the 160 and costs over three times as much, it is not as if anyone is ever going to agonise over which one to choose.

The method in this apparent madness comes from a gut feeling – my gut feeling, as you’re asking – that too often the concepts of fast and fun are assumed to have a far closer relationship than they actually do. There is a misguided notion that they are somehow inextricably linked by a length of elastic, so although there is some stretch between the two scales, broadly speaking the more you have of one, the more there’ll be of the other. And I just don’t believe it to be true. 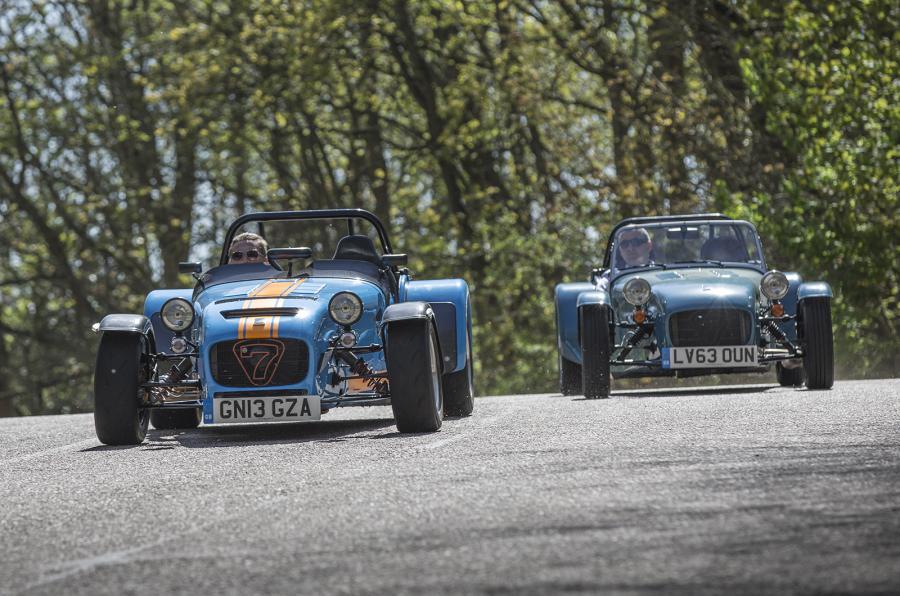 We’ll start with the junior of the pair, Caterham’s three-cylinder 160 with its headline-grabbing sub-£15k price. It may be the latest Seven, but in its modest 80bhp output, ultra-light weight and live rear axle, it’s far closer in concept to Colin Chapman’s original ideas for the Lotus Seven than any Caterham of the past 30 years.

Its appeal extends far beyond that list price, which turns out to be somewhat less attractive once you’ve forked out a further £2000 to get it built and £1150 for it to be painted.

Its real unique selling point is that this is probably the most usable Caterham of all, the one you’re most likely to drive for reasons other than seeing how fast you can get around a track or from point A to point B on a great country road. Thanks to its shortage of power and the corresponding reduction in grip brought by hard, skinny tyres and live rear end, you don’t need to be on a circuit or up a mountain before it starts doing all those things we love Caterhams to do.

To the interesting accompaniment of the responsive little Suzuki engine, the 160 will slide and drift at remarkably modest and legal speeds. And because it has a sub-half-tonne mass to control and its chassis is so good-natured, it makes you feel like the superhero who can stay on the right side of the law, and do so on roads you use every day.

Its problems are not those you’d expect. The performance doesn’t feel hopeless and its tiny turbo engine isn’t prone to lag. But the gear ratios in the five-speed ’box are weird. Second is so low that it works perfectly well as a first gear (in effect making it a four-speed ’box) and the jump from there to third is greater than the torque of the little engine can comfortably cover. Also, don’t go thinking that its soft suspension and narrow tyres will produce a beautiful ride; the live axle puts paid to that notion. The range of frequencies fed to your bottom vary from fidgety to choppy. 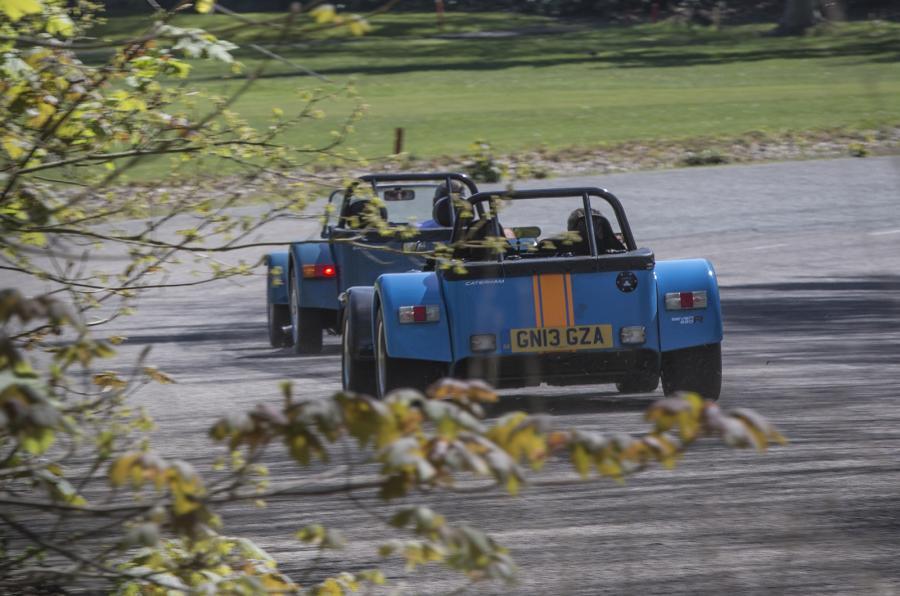 You don’t have time to think about ride quality in the 620R. Nor time to think of anything other than grabbing another sequentially selected gear. What makes Caterham’s flagship among the most vivid experiences that it is possible to have with a steering wheel in your hands is not the power of its 311bhp supercharged 2.0-litre engine, but its torque.

What will get you giggling and your passenger screaming is not the performance per se, but its immediacy. Whereas other even really fast Caterhams need to be wound up with high revs and low gears before they’ll really let go, if you nail the 620R throttle at something as modest as 3000rpm in fourth gear, it simply goes berserk. Thereafter, it’s a question of how wild a ride you want or, indeed, can cope with.

For there is nothing easy about driving the 620R quickly and, in this regard, it is the polar opposite of the 160. It is not that its chassis is tricky. Indeed, in its own way, it is just as benign as that of the 160. But because its speed is so immense and the grip from cut slick tyres so other-worldly, everything happens in x12 fast forward. You need time to dial into it. When you have and as long as you have the space and no one to see or hear its quite deafening song, it will enchant and bewitch, and reach and recover from apparently irrecoverable angles.

But here’s the thing: you can’t just jump into the 620R and enjoy it. You’ll have to push it to the end of the street because it’s definitely someone else’s neighbours you’re going to want to wake when it starts. You’re then going to need to endure probably some hours of brain-numbing noise before you get anywhere you can use it properly. More likely, you’re going to need a trailer. With the 160, you’d slip out unnoticed and probably have slipped in a few sneaky skids while the bloke with the 620R was still ratcheting down the straps.

I’m delighted that the 620R exists; there is nothing else this money will buy that could excite, engage and enthuse me more, and the same can be said of the 160 at its rather more modest price point. But out there in the inconveniently real world, the 160 makes a compelling argument for itself as a Seven that you can both afford and use. I’d like a little more power, a limited-slip diff and some more attractive wheels, but this is still not a car for which apologies need be made. Just like the 620R, it is a Seven through and through.

I also know this: lover of little, lightweight, low-powered sports cars that he was, Colin Chapman would have approved. And if it’s good enough for him, then surely it’ll do for the rest of us.

This article was originally published on 22 June 2014. We're revisiting some of Autocar's most popular features to provide engaging content in these challenging times.

Bit c'mon, the 620 is the motoring definition of EPIC.

If I could get a 160 here in California without being gouged by the importers I'd buy one tomorrow. Unfortunately that isn't going to happen as the importers don't understand we know the UK price includes all the taxes that they bundle into their price before adding US taxes on top.

My very first car was a 750 special with a warmed up Austin 7 engine. It was a blast to drive around English lanes with the occasional run into town when I'd missed the bus. It was also my introduction to racing, being used for 750MC events including the Birkett 6 Hour Relay.

My second car was a Ford Anglia 100E. That was also modded until it started breaking con rods with regularity. It was my commuter on weekdays and racer at weekends.

Then it started to get serious. Bigger engines, fancy suspensions and transmissions, more expense, more problems.

Ah, for the simple life again. My smart serves me well for daily fun, wound up to maximum revs in every gear, but I would be even happier in a reasonably priced 160. I suppose I'm just going to have to build my own, a la LoCost format. I have my plasma cutter, MIG welder and a supply of steel tubing but what can I use for an engine transmission. Bike engines are nice but reverse ends up being somewhat Heath Robinson to arrange. Putting a smart power train in the back might work but the US models have the stupid huge gap between 1st and 2nd gears that FU the concept.

The 160 will be sold here without the Suzuki drive line as it's not available in the US and will still cost far to much to be a viable inexpensive fun car. Dammit.

The 620R is just too fast for me & the 160 is a bit too puny. Id pick somewhere in the middle. Hopefully Catheram will offer the 3 cylinder Ford Ecoboost engine, with the boost turned up a bit. That's the one I would pick
View all comments (5)