Mazda introduced itself to us Brits with a Wankel-engined sports coupé. Turns out its engine was better than NSU's and it "handled like a Porsche"
Share
Open gallery
Close
Share story

It seems Mazda will always be linked with the Wankel rotary engine. After all, it was the only manufacturer that persevered with the concept.

It wasn't the first to use it in a production car, though; that was NSU, with the Spider of 1965, followed by the Ro80 of 1967. Mazda's unit actually had its basis in NSU's, with the Japanese company having purchased a licence to the then-revolutionary technology from the Germans in 1961.

NSU's unit was highly problematic; some Ro80s' engines wore out before they'd covered even 30,000 miles, and although the problem of excessive wear was eventually resolved, warranty claims destroyed the brand's finances.

Thankfully for Mazda, then, its engineers had spent years refining the formula – redesigning components to prevent the fatal 'chatter marks' caused by oscillation and developing aluminium-carbon seals in place of NSU's iron rotor tips – before releasing its debut Wankel car. 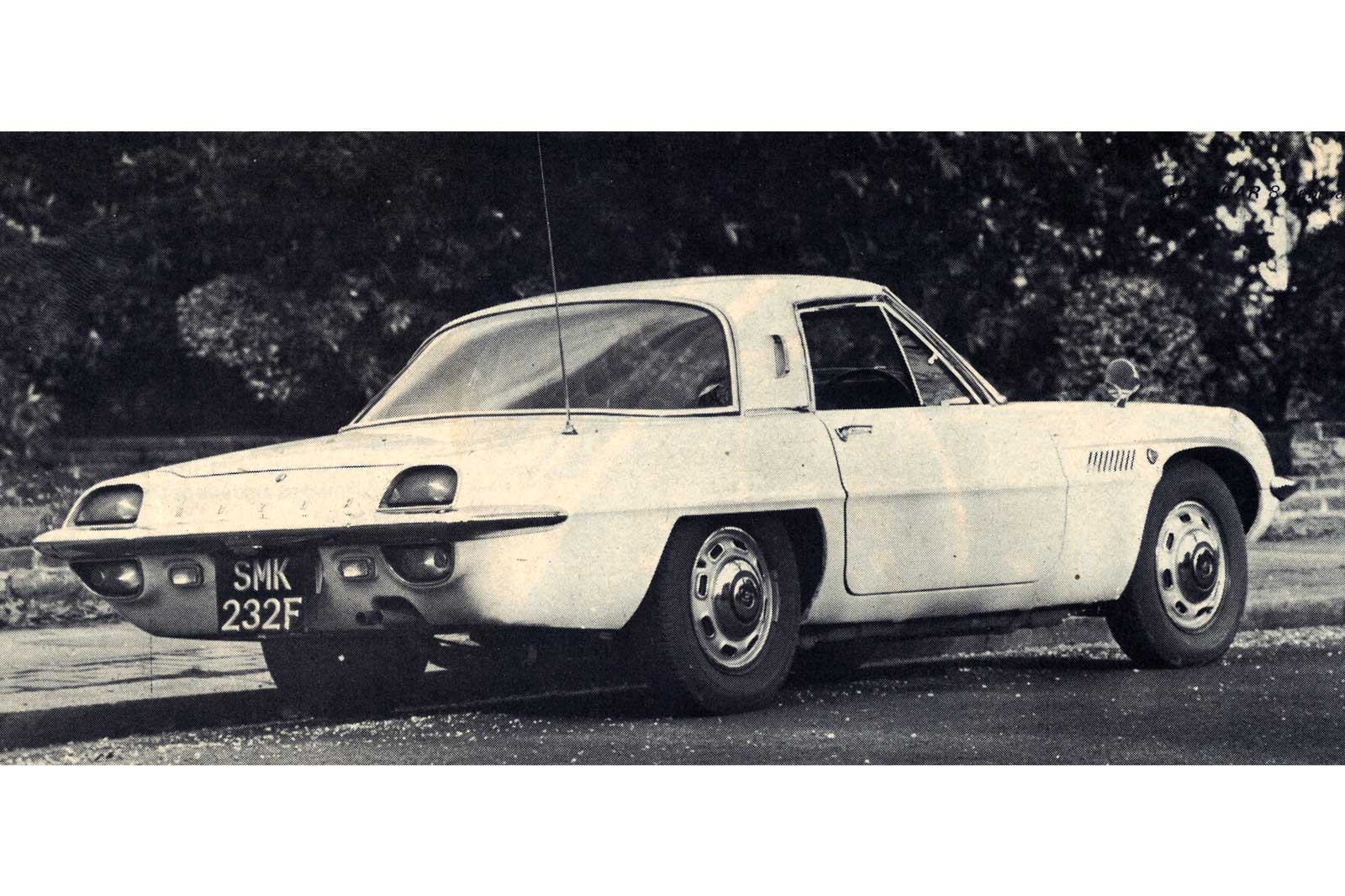 That was the Cosmo, a diminutive (3ft 8in high, to be exact) but handsomely distinctive two-seat sports coupé that arrived in prototype form in 1963 but didn't go on sale until May 1967.

Under the name 110S, the car became the first Mazda to be officially imported to the UK, and with it, Autocar received its first experience of Hiroshima's finest on 8 February 1968.

"This car is different from anything we have previously experienced," we began. "Searching for similarities, we thought it had a suggestion of competition Saab about the feel of its power unit and of Porsche in its handling.

"The exhaust has a very distinctive sound, with a touch of two-stroke; the engine itself produces a blend of gear whine and nasal roar. On fast journeys, the collective drone heard inside the car is rather loud even for a GT coupé and after a time becomes tedious, yet with light throttle and gentle driving, the car is unusually quiet.

"There is no lack of pull at lower speeds, as some engineers expected, nor is it rough or uneven when idling. The idling speed is on the high side, at 750rpm, but perfectly smooth and unobtrusive when standing in traffic. We were surprised to find that the car will pull away at under 1000rpm in top gear – very slowly at first but without protest. No one would ask it to do this except to prove the point and, in fact, it prefers to be driven hard with revs well up. At the top end, this very responsive, free-revving unit has a normal limit of 7000rpm. 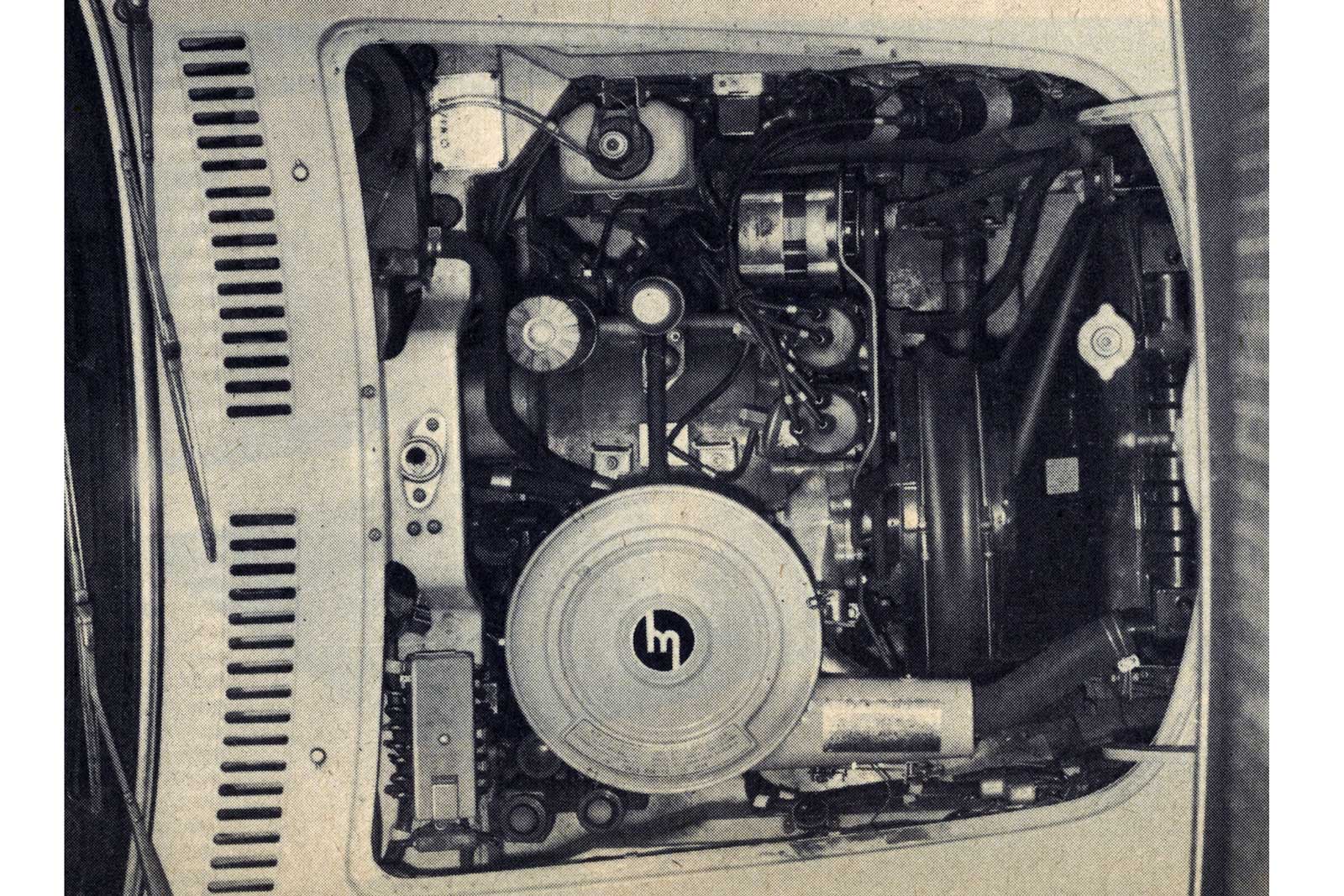 "This Wankel proved to be a good cold starter and it warmed up unusually quickly to 80-85C. It runs happily on the lowest grade, two-star fuel, so this is some compensation for the fairly heavy fuel consumption, which reached only 20mpg on gently driven journeys. Ordinary city driving gave us an average of 18.5mpg."

So, the engine was a success. As for the other key element of a sports car: "‘Handles like a Porsche’, we said – but only to a point. Quick, precise steering, with a weight bias in favour of the rear wheels, are part of it. Then the rear-end adhesion is impressive, especially on wet roads. The car goes just where you point it, with momentary understeer at first, which is possibly no more than distortion of the radial front tyres at the unusually low pressures recommended.

"Using power in the normal way through a corner, it's a neutral steerer. If you yank the steering wheel over and pour on a lot of power, the rear wheels may finally condescend to slide, with the inside one trying not to lift. This agreeable back end has the unusual suspension combination of de Dion layout with leaf springs.

"Sports and GT cars traditionally have firm suspensions; the Mazda is quite softly sprung for its class and its ride is mainly comfortable, but second-rate road surfaces cause too much bounce. There is some vertical jogging, also a fair amount of thumping over joints and ruts. We shall reserve our final judgement on these impressions until we try a much newer car, because there were signs that the dampers were nearly worn out. We took the 110S over the test pavé at MIRA, which it suffered unexpectedly well without any bottoming on the bump stops or hopping about at the back. It was not so happy on the washboard but showed its body to be rigid and pretty free from shakes and rattles. It seemed to iron out the ridges best at about 30mph. 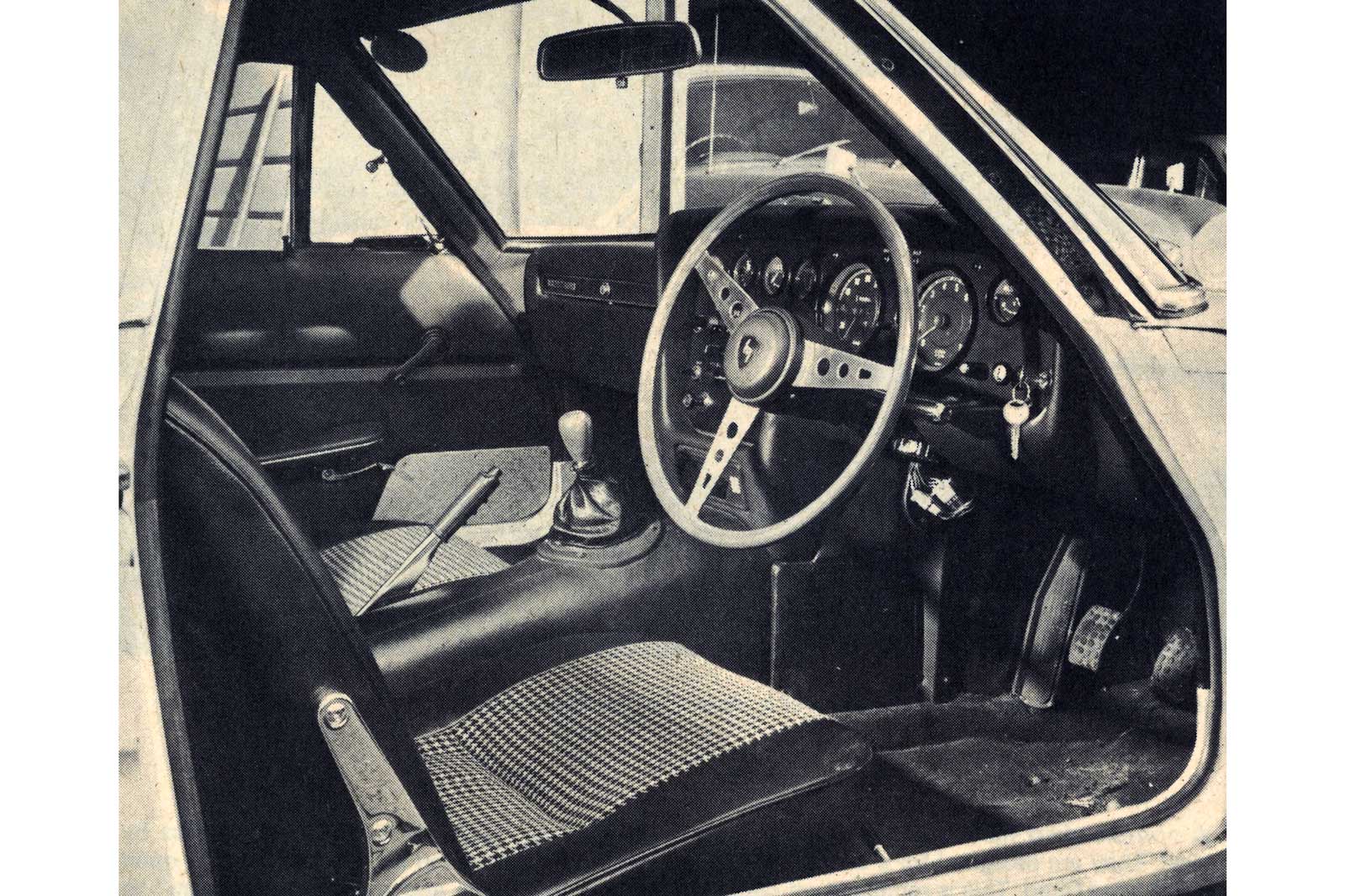 "On corners, the car scarcely leans at all, and since the seats are well shaped and upholstered, the occupants do not get thrown about."

The 110S was also impressive inside, where "an adjustable steering column and smooth-sliding seat with reclinable backrests combine to help all sizes of driver to get comfortable". All of Autocar's testers found these to be "jolly good", apparently, and while the car was "lower than pictures suggest. the clap-hands, overlapping wipers sweep a big area clean, so, except for the rear quarters, look-out is very good all round".

We continued: "The car weighs 958kg – down at the lower end for its class, with the Lotus Elan +2. This obviously helps towards a distinctly lively performance. Two of our drivers achieved a consistent 17.7sec for the standing quarter mile and 10.0sec for 0-60mph. The Mazda seemed to be unfussed by a more than average tousing, refused to spin its wheels other than momentarily, even on a wet track.

"Normal maximum speed is about 112mph. We say 'normal' because with an engine of this kind, the rpm may slowly build up mile by mile on an autoroute and the car eventually hold perhaps 120mph. When accelerating hard in second and third gears, it is all too easy to sail past 7000rpm without noticing it; 7500rpm tops 60mph in second and 90mph in third.

"A stubby little gearlever with short, precise movements sits a hand-span from the steering wheel rim. It's pleasant and easy to flick the gears through.

"A non-standard feature of the test car is its brakes. They are designed for a servo, but none has yet been fitted. This is remedied on cars for sale. In the meantime, the driver has to push extra-hard, but the results are very good. Again, the wet-road adhesion is well above average. The rearward weight bias allows the rear wheels to do a larger share of the work." 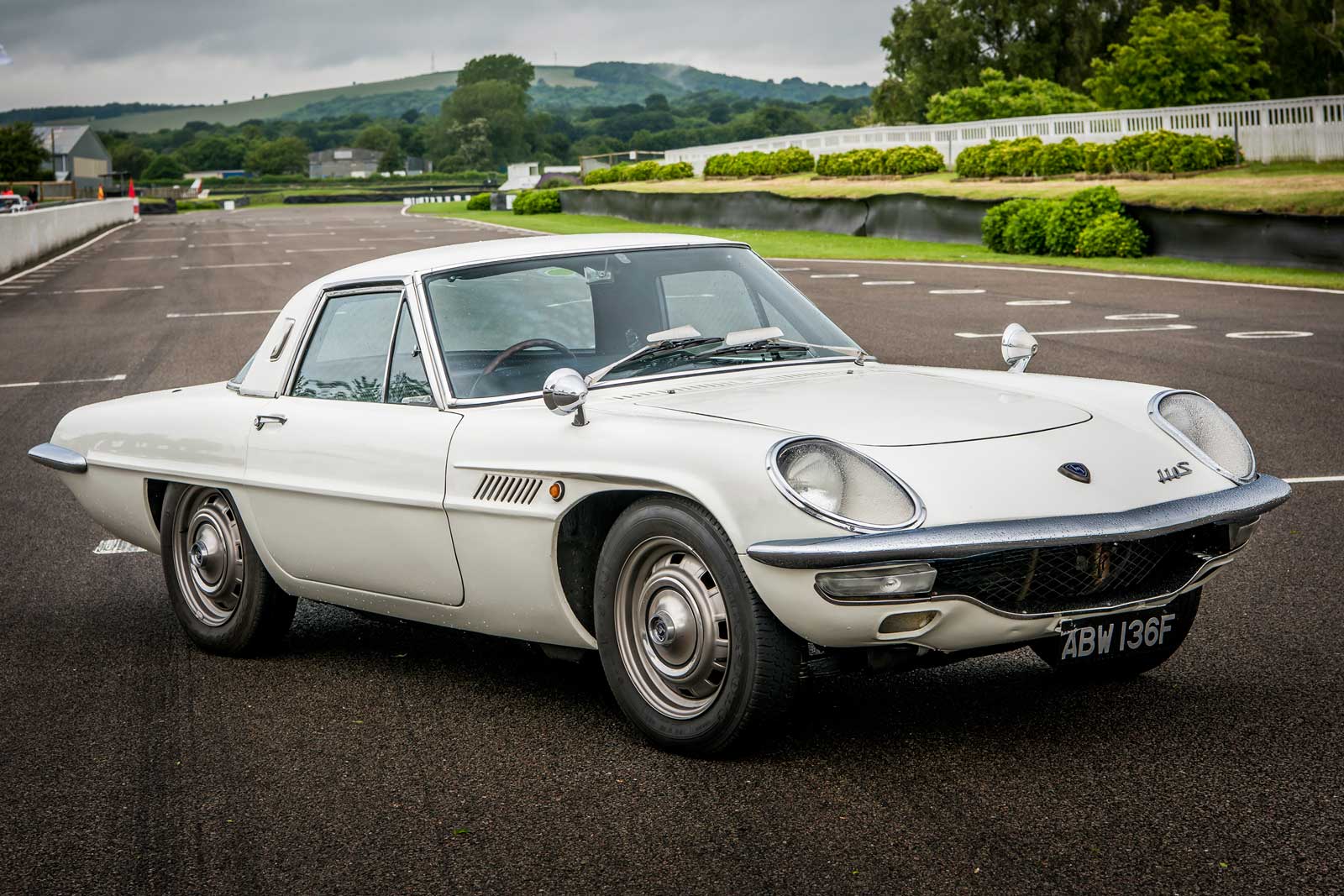 Mazda was a new brand in the UK, and its price of £2606 (equivalent to around £43,000 today) contributed to it being a very small seller. In fact, Mazda completed a total of just 1176 Cosmos over six years. It was a good thing, therefore, that "the 110S comes fully equipped, even to the self-seeker Clarion radio with twin speakers and electrically extending aerial".

As for the interior design: "The facia and offset instrument panel are rounded and well padded; we liked the switch and dial layout. Black moulded and sewn PVC, well fitted, covers almost everything except the floor and the central strips of the seat coverings. This did not everywhere match the mechanical quality of the car and was becoming a bit shabby in parts. The carpets were a real mess, worn through in places.

"We did not succeed in mastering the heating system, mind you, it being "apparently of the fry or freeze kind".

For its class, the Mazda has "a large but rather shallow boot", we said. "In addition, behind the seats, there is a low platform with straps to hold one or two more bags."

Following such a positive drive, Autocar's writers saw potential of the Wankel engine, and indeed for Mazda itself on these shores. "This Mazda impressed us very much," we eulogised. "It has a few shortcomings, but the mechanical side is far better than we had dared to hope. Some British and American designers may live to regret their disinterest in and neglect of the Wankel unit, which already has so much driver appeal."

"The 110S is pricey for British buyers, does not have the latest in sports car styling and is aimed at a limited cut of the market, so we may not see very many of them. Yet if Mazda, who already have sunk some £3 million in Wankel development, could design this car five years ago, what must we expect of the new front-wheel-drive RX87 [the Luce saloon] and others to follow?"

Well, at least we got one half right; while the RX-8 took the Wankel engine out of production in 2012, it never having managed to challenge its traditional counterparts, Mazda has found great success and admiration – perhaps most notably thanks to a car more than a little reminiscent of the 110S.

How much of the high purchase price of this Mazda was import tariff imposed to protect British car makers?