BACK TO ALL NEWS
Currently reading: The mileage rates for petrol, diesel, hybrid and electric cars
UP NEXT
New 2022 BMW 8 Series gets M-car makeover

The mileage rates for petrol, diesel, hybrid and electric cars

HMRC sets specific rates for drivers to claim back the cost of business journeys. Here’s how it all works
Open gallery
Close

It's vital to closely watch advisory fuel rates. Here's why.

What are advisory fuel rates?

If you’re driving a company car (or van), the latest advisory fuel rates (AFRs) are what you need to keep an eye on. Refreshed every three months to reflect shifting prices at the pump, they set a per-mile rate for reclaiming fuel expenses if you’re out on business. Employers can also use them to claim back fuel for private mileage – for example, if drivers are using a fuel card.

Of course, that fuel cost depends on what you’re driving, so the system is fairly granular. There are specific AFRs for petrol, diesel and LPG vehicles, each of which also has different rates depending on the size of the engine. Rates are calculated based on an average fuel efficiency figure for vehicles sold to fleets and the latest forecourt prices across the UK, rounded to the nearest whole penny. 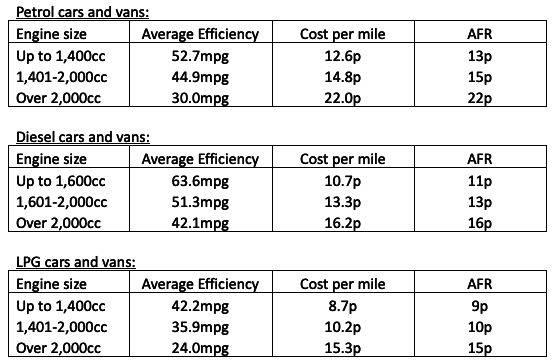 What are the mileage rates for electric and hybrid cars?

HMRC doesn’t class electricity as a fuel, so it took until 2018 to introduce a mileage rate specifically for electric vehicles. The Advisory Electric Rate (AER) is calculated similarly to an AFR, based on energy-efficiency data and the average cost of a unit of electricity at home. This is currently a flat rate of 5p per mile for all EVs.

Hybrids still don’t have their own AFRs. All hybrids, including plug-ins, are reimbursed at the same rates as a petrol or diesel car, based on their engine size.

Can employers set their own rates?Yes, but it’s complicated. HMRC says businesses can adjust the rates if they’re leaving drivers out of pocket or the actual travel costs are much lower, which could be useful for plug-in hybrids. However, they have to provide evidence showing why that adjustment was needed, and any excess can be taxed.

Employers also don’t have to use AFRs if employees pay them back for the full cost of private journeys instead of calculating it based on mileage.

Which mileage rates can I claim for using my own car?If you’re driving your own car on business, HMRC has higher mileage rates in place to cover the cost of wear and tear as well as the fuel used. These are called Approved Mileage Allowance Payments (AMAPs).

AMAPs haven’t changed since 2012, and they’re set at 45p per mile for the first 10,000 miles and 25p per mile afterwards. There’s an additional 5p per mile available for business journeys with a passenger on board, which helps to incentivise some green-minded carpooling.