BACK TO ALL OPINION BLOGS
Currently reading: Matt Prior: don't hate the delivery drivers, hate the panic buyers
UP NEXT
Opinion: Virtual Porsche concept gives real cause for excitement

It’s a wonder it took this long for us to really feel the lorry driver shortage.

The UK's recent fuel supply crisis came from a perfect storm of contributing factors, some easier and cheaper to take a pop at than others. Take away any single reason and the outage probably would’ve been averted. You would’ve found the odd pump dry, shrugged and moved to another one or a different forecourt. But, ultimately, the crisis exposes the truth that we’ve taken the mickey out of lorry drivers for too long.

The immediate problem was sparked by BP when it complained to a Cabinet Office meeting in mid-September about its driver shortage. When ITV News headlined those comments “BP prepares to ration fuel deliveries”, the resulting panic buying was probably inevitable.

It’s ironic that this time last year, BP’s contracted tanker firm, Hoyer Petrolog, was facing the prospect of Industrial action because it wanted to lay off more than 20% of its drivers at its Cheshire refinery and depots.

“It’s clear that we will not return to ‘normal’ [levels of fuel demand] for at least the next 12 months, if at all,” Hoyer predicted, while trying to lay off drivers that the industry now thinks rather more valuable.

If it miscalled things then, others had an even worse pandemic. Lorry drivers are key workers, so surely the body that supports them is too? You wouldn’t know it: the DVLA reportedly has a backlog of 54,000 HGV licences to process (although it had strike action through August).

Small wonder the government is now writing to all of the UK’s HGV licence holders to ask them, if they’ve left the industry, whether they would pretty please consider coming back. To what? To long hours where the pay and conditions are poor for what is a skilled, difficult and tiring job? To where distributors have outsourced driver employment to agencies that win those contracts on cost? 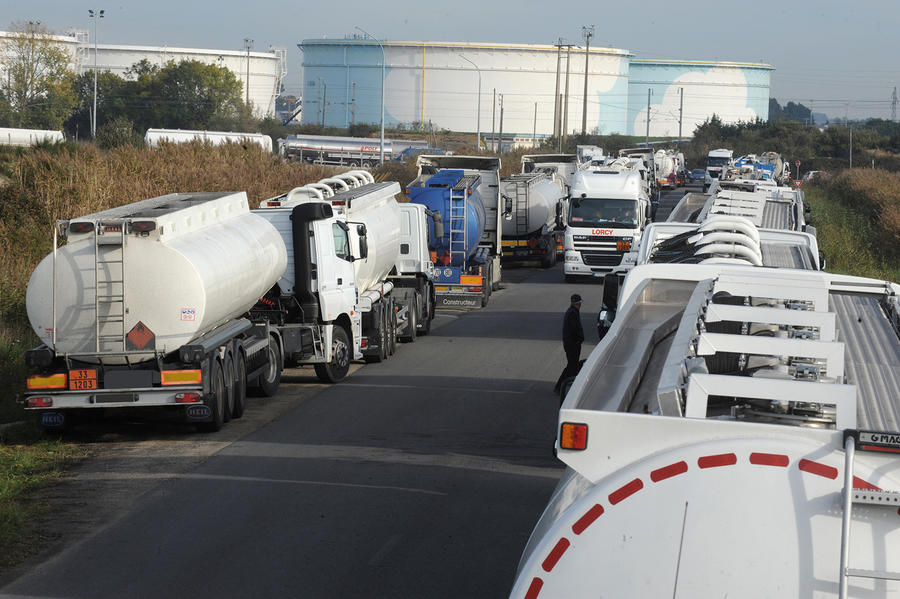 Drivers report being asked to be self-employed, even when working predominantly for one distributor – something that the new IR35 tax regulations (for off-payroll working) seek to stop. The RHA thinks IR35 changes are the reason behind half of all driver exits from the industry.

There are other good reasons, too. The UK has terrible provision of rest areas, catering, toilets and showers compared with Europe. Drivers here face paying £25 per night out of their own pocket to park in a service area and eat unhealthy, expensive food.

Previously, the slack was taken up by Eastern Europeans prepared to take lower pay and live out of their cabs. It’s no wonder that distributors would like that tap turned back on.

The factors, then, are myriad. The pandemic, licensing, Brexit, the way the shortage was reported and the resulting panic buying all have a role.

It will suit corporations and organisations if we mock matey queuing for fuel he doesn’t need because he’s an idiot. Fine, he deserves it. But mocking individuals takes the focus away from the root causes. For years, those who keep us fed and fuelled have deserved better.

Log in or register to post comments
Medler 16 October 2021
The major players in the Haulage industry have been running a constant media campaign about the drivers shortage, using their mouthpiece of the RHA.

They've blamed everything for it except the main cause, the industry itself. They've had a drivers shortage of 60,000 to 80,000 for over 20 years, but they've done nothing to stem the loss of drivers due to poor pay, long hours, poor treatment at especially at RDC's run by haulage companies for the supermarkets.

They've also done nothing to provide training for new drivers, to replace those who are retiring. The training costs have risen massively, due to have to take 2 driving tests, a theory test and a DCPC test, to get a C+E licence, mostly paid for by the driver, who then finds they get offered work at barely above the minimum wage, if they can get a job at all without the 2 years experience.

And their only solution to solve the problem is to demand a Visa scheme for foreign drivers. However Brexit or not many of those drivers would have left, as they've found out in Ireland, where the Irish RHA are now demanding visa's for non-EU drivers because many of their East European drivers left during lockdown and with driver shortages across Europe they're having trouble getting drivers to replace them.

I think we have to blame what is laughably called News papers these Days, they seem to be full of or should I say want to report Scandal, gossip and other tripe because sadly we have generations who want to know personal stuff about the people whom they perceive are having a better life than them, so, a report about a possible fuel shortage, like a Bottle of spilt Ink on blotting paper, spread like wild fire causing all sorts of fracas, and I agree, fuel suppliers are going to have to get this fixed.

By the very nature of cars having a limited capacity the panic buying was rationed! Except for the few who bought bottles of water, emptied them, and filled those to get a few extra litres.

What it did was expose how limited stocks were in parts of the country, and the HGV driver shortage. In my area (Scotland) we've had no real problems at all. I've seen one BP station run out, but when I've got to my regular fuel stops I've not found any issues.

As for the drivers, I know one HGV driver who loves driving his truck. He changed jobs to become a truck driver, moving from a well paid service manager with BMW to driving HGVs. Whenever he can he's out polishing up the truck - and it's not even his but the company he drives for!

Yet even stopping in a "safe" truck stop he still got his fuel tank broken in to and emptied during the night. Whilst he was sleeing in the truck. Not an easy life.