BACK TO ALL OPINION BLOGS
Currently reading: Ginetta's affordable race series
UP NEXT
A gentle soul... and bloody fast: remembering Richard Burns

It would be easy to dismiss Salon Prive as a gathering for the rich and famous rather than a serious car show.

The upside, however, is that the people visiting the event are the sort of people who can afford to invest in the concepts and supercars on display; both Spyker and Icona are here hunting for customers for their B6 Venator Spyder and Vulcano respectively.

One of the stars that has caught my eye, however, is Ginetta and the launch of its Racing Drivers Club.

Here's the deal. You hand over £28,950 and in return you get a Ginetta G40R Club car plus a bespoke race series in which to compete.

The idea, says road car project manager Mike Simpson, is to offer more people an affordable route into motorsport. "The Ginetta Racing Drivers Club is about bringing fresh people into the sport – people who can access it financially but who perhaps don't have the time," he says. "We're creating a club atmosphere, where customers compete on some of the best circuits in the UK."

Drivers aren't thrown in at the deep end and left to fend for themselves, however. The scheme also includes two track days of tuition and a racing licence package. The race championship then takes place over four weekends, supporting the British GT series.

Ginetta will have full technical support at each venue, and Simpson says the idea is to encourage a family-friendly atmosphere. "It's a true, basic club, but it's not all about the racing," he adds. "There'll be events for the family too, and you'll also get to drive the car to Le Mans and stay with Ginetta owner Lawrence Tomlinson for the race."

And the best part? At the end of it all, you still own a road-legal car to use on track.

The car itself is pretty special, too. Weighing just 820kg, the G40R Club is powered by a 1.8-litre Ford-sourced engine producing 145bhp. A Mazda-sourced five-speed manual gearbox ensures fast and smooth gearchanges, while the car is surrounded by an FIA-approved tubular chassis.

An interesting proposition, then, but will potential customers get on board? Put it this way: within an hour of Salon Prive opening this morning, the company had already signed its first racer. 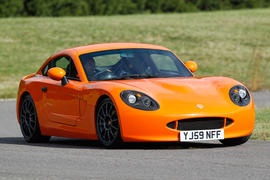 From speaking to the guys there, I think the idea is there are 4 race weekends (including practice, qualifying, and two races) as well as two instructed track days to get you your ARDS license, a car included (yours to keep) and an expenses paid road trip to the 24 hours of Le Mans, oh, AND a car....I quite liked the 4 weekends - i'm a busy guy, they already do 7 and 10 race weekend series and for a new starter it keeps the costs down. I'm trying to sell some assets as I loved the car - looks great in the flesh. Seemed to be selling well too - didn't see many dads buying for kids mind, seemed a bit more selfish (actually over hearing some of the chats they all seemed quite ordinary - no floppy hair in sight!) I might take my kids with me, but they'll have to wait their turn!!!

To be honest, just good to see a good value offer from a good honest company. just hope I get there in time!

How about a full seasons racing or rallying for just over £3,000?

It hasn't happened yet, but maybe...

assume that doesn't include

assume that doesn't include the car or instruction or ARDS etc otherwise it's remarkable?

As this Ginetta is road

As this Ginetta is road legal, its a terrific deal, for a new package. You could even drive it to the circuit and back. But 4 races only, is a little bit crafty, because there are better deals to be done for a whole season of say 10 races, else where. But only just.