BACK TO ALL OPINION BLOGS
Currently reading: The rebirth of Maserati gathers pace at the New York motor show
UP NEXT
Opinion: The future of the BMW M5 is now as a plug-in

Sitting on an airplane heading home offers the perfect opportunity to reflect on a motor show. It tends to be quiet, there’s a drinks cart, and your mobile phone doesn’t ring. Funnily enough, my pre-show thoughts also came together on the flight to New York City.

As I think about all the cars at the New York motor show, a couple stand out. The Mercedes-Benz S63 AMG coupé impressed me with its gorgeous exterior and Bentley-scaring interior. It is much more than just a two-door version of the (also impressive) S-class saloon.

Speaking of a rebirth, Maserati had a very large stand in New York. It’s clear the company wants a bigger piece of the luxury car market in the USA. In February Maserati spent a reported $12 Million US dollars (around £7 million) on a 90-second Super Bowl advert. Plus, the east coast of America is a big market for the company.

While it’s clear Maserati needed more than the last-generation Quattroporte to be successful in the luxury saloon market, I’m not too sure the latest Quattroporte (or Ghibli) is good enough. Sure, the addition of all-wheel drive and V6 engines (and a diesel in Europe) are key but all you need to do is look at the latest Mercedes S-class and it’s clear the Italians have more work to do.

I recently spent time in the latest Quattroporte and, to be frank, I was disappointed. The old Quattroporte was flawed but it handled brilliantly and felt special. It wasn’t as good as the German competition at being a luxury car but it was a truly wonderful car to drive quickly.

The new Quattroporte ticks nearly every box on paper but there is something missing. From the lacklustre interior detailing (including lots of subpar Chrysler bits) to the less-than-stellar steering and overall driving enjoyment, it’s just not good enough to fully compete with the best from Germany. I had a good chat with a handful of other journalists in New York about Maserati and they felt the same way.

But people are buying the new Maserati models. Last month, the manufacturer's sales were up 342 per cent in the USA versus March 2013. That’s very impressive. But you need to look at the actual numbers to see where the company sits in the luxury car market. Maserati sold 963 cars in March of this year.

Mercedes and BMW each sold a similar number of automobiles each day in March. BMW put 32,107 new vehicles on the road in the USA in March of 2014. To be fair, that number is very much helped by BMW having SUVs in their model line up. That’s something that Maserati is working on.

Progress is progress and Maserati is growing. I just wish it offered a large luxury car that was as good as a Mercedes S-class but still had the full Italian flair of the old Quattroporte. 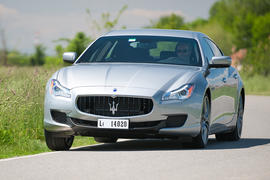 I couldn't agree more. Fiat badly needs to be steered by people who are both knowlegeable and passionate about cars. They have financiers instead. Lancia has been tortured and killed, Alfa and Maserati are Fiat cameleons. Pah!
concinnity 20 April 2014

Fiat has always had the ability to snatch defeat from the jaws of victory. They do this by continual penny pinching and cheapening of their upper brands. It has succeeded in killing Lancia, now Maserati and Alfa put their heads on the block. Price as the only consideration may seem to be the only important thing in designing, making and developing small cars but VW and the Koreans might even be proving this wrong. Certainly it is not something that applies as one goes up-market. Surely, their failure with Lancia has been noticed and noted internally? Despite a motorsport heritage that any other car marque must envy, particularly in rallying, and an engineering history with more firsts than Mercedes Benz and Volvo combined - and that exposes BMW and Audi as the 'arrivistes' they surely are. Lancia has been left to wither on the vine after being poisoned by continual cheapening, underinvestment and mismanagement by a bunch of idiots who think they know the price of everything and prove they don't know the value of anything. With Ferrari kept as a separate entity by it's canny management it is now Maserati and Alfa Romeo's turn to suffer the death by a thousand cuts of incomplete,'that'll do' development and inferior materials, combined with lack of dealer support and poor customer service that are the hallmark of the Fiat group.There is even a word for it, 'Lanciaisation'.