BACK TO ALL OPINION BLOGS
Currently reading: Why a Z crossover makes sense for Nissan
UP NEXT
Could used be better than new for KTM’s freak four-wheeler?

Why a Z crossover makes sense for Nissan

It's not a sports car, but the next Zed could do more for the brand - and the balance sheet - as a small crossover
Share
Close
Share story

The prospect of a Z car having more than two seats may not be totally alien to Nissan's engineers - but the idea of it being a jacked-up crossover certainly is.

Nissan is about to take a huge risk with its sports car sub-brand by creating a new Z car in the image of a crossover, and it knows it. As creative director Shiro Nakamura describes it, this will indeed be a “revolution”.

Sadly, that’s what is required - because when all’s said and done, the 370Z has done little to boost Nissan’s image or its sales sheets. Its combination of a hefty V6 petrol engine and rear drive has looked increasingly old-school against ever more sophisticated rivals.

Furthermore, the sports car market itself has been shrinking, squeezing the potential impact of even a successful Z car.

We’ll know more in a few weeks, when we finally get to see what Nissan’s interpretation of a sports crossover looks like. But the company has a terrific record on SUVs, and if it can mix that slightly raised stance with entertaining dynamics and a trick hybrid powertrain, it could have a fascinating Z on its hands.

Not a traditional one, I grant you, but potentially a sales hit. 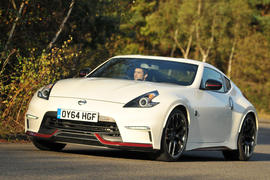 Still no delicate sporting masterstroke, but neither should it be. A muscular, charismatic and fast GT with much improved road manners

25 August 2015
If they want to do a sporty crossover, fine, but to make it "the" Z would be beyond shameful.

25 August 2015
The picture looks like a squashed Juke. Thats fine if they think there is a market. But its not a 'Z'!
Will they not be happy until we all drive these crossovers? Some of us really dont want one.

A jacked-up Micra with

26 August 2015
A jacked-up Micra with attention-seeking styling? No thanks. But I suppose the poor sales of the Toybaru coupe are pushing them towards this heresy. They should retire the Z badge and call their squashed joke something else.

Simple answer to the question "Why a Z crossover makes sense

See - zhome.com/History/Zproduction which covers Total production of the Z Car throughout its life.

I selected a new 260Z 2+2 (bought in Australia) when I moved to Australia in 1974. Simple engine to maintain - even in the Outback. It did a remarkable job of towing my boats. I also had a rare Lancia Fulvia 1.6 HF that I shipped to Australia from UK together with a new spare engine.

The Z was a comfortable long distance tourer that I used between Outback farm and City restaurant businesses.

A Z Car SUV would suit my needs perfectly. Then & Now.

Car makes sense, Z does not

2 September 2015
A sporty SUV will likely sell well in the current market, even though that is like having high-heeled trainers. So it makes sense to build it, but using the branding from low riding sports cars does not.

Welcome to HP Printer Support for instant help and printer services. HP Online Care is one and only online HP Printer support provider for hp devices. Let HP fix your devices online. Our certified technician are available 24x7 for help and support. You are just a call away from our support team. Any hp product which is under warranty will be fixed Free of Cost without any charges online remotely.