BACK TO ALL OPINION BLOGS
Currently reading: What’s the worst thing you’ve ever found in a used car?
UP NEXT
Remembering Colin McRae, 25 years after he became Britain’s first WRC champ

What’s the worst thing you’ve ever found in a used car?

Having bought a few used cars recently, it’s always interesting to see what the previous owner has left behind.

Recently, I found a whole bunch of random CDs that way. It’s likely to become a more common occurrence too, I think, as people increasingly use their iPods and forget about the small polycarbonate discs scattered in forgotten places in their cars. I got all of Elvis’ no.1 singles that way.

I’ve also turned up some small change in the past. The Rover Sterling I de-cluttered six years ago turned up a staggering amount of minor denomination coinage – plus an immense amount of dirt.

I also know of someone who found what could only be described as money obtained probably by menace and stashed in a hidey hole behind some trim in an old Audi. He was either very fortunate, or will have to spend the rest of his days looking over his shoulder.

Such cleaning has also turned up a spare key to Shed 7, which is useful and could be a selling point one day.

Among the worst things left in cars I’ve bought was the remains of motorway sandwich, which had been crushed flat under the rear folding seats of a Volvo V70.

Plus there are also some good things I’ve kept from cars I’ve scrapped, like the badge of an FSO 125P - which was the only decent part in the vehicle - and the toolkit with Fiat written on it. I also kept the old radio, which I re-homed in a wooden box and altered to run off batteries.

Oh, and the hydraulic bottle jack from the Land Rover Discovery has come in very useful over the years, too.

So I just wondered exactly what you have found in a car you've bought which had proved to be useful, unpleasant or just plain odd. Let me know below. 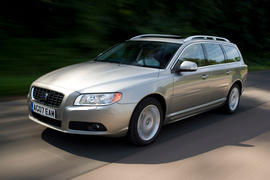 The Volvo V70 is spacious, but suffers from vague steering and old engines

I bought a second hand Mondeo and was assured by the dealer that it would be fully valeted. When I arrived to collect the car it had been washed but not valeted, I complained but needed the car that day. If the guy had cleaned it he would have found the £50 note in the trinket box.
scotty5 29 October 2014

I once found a Jaguar X-type badge stuck on a Ford Mondeo.
Paul Dalgarno 28 October 2014

I can't imagine anything more terrifying....

A Stock, Aitken, and Waterman compilation CD in a used Golf I bought years ago.

Was thinking if I bought one of those drug dealer BMW X5s with chrome arches I might find some cash stashed inside the interior panels though.