BACK TO ALL OPINION BLOGS
Currently reading: Hyundai's new hybrid could challenge diesel in future
UP NEXT
Matt Prior: Sometimes being a car journalist is a pain in the back

Hyundai’s new hybrid transmission - unveiled today in the new Ioniq - could replace conventional diesel engines in the future, according to Woong-chui Yang, vice chairman of Research and Development for the Hyundai motor group.

Yang revealed that the new transmission was "significantly" cheaper to produce than the hybrid in the Toyota Prius, mainly because it uses a single electric motor, rather than the dual motors in the Prius.

Yang revealed that, just before speaking to Autocar, he had also met his engineering team to discuss the extra costs of adding Urea injection systems to Hyundai and Kia’s existing diesel engines.

"A modern diesel engine is already $3000 [at factory cost] more expensive than an equivalent petrol engine. Our engineers think it will cost another $1500 to add the Urea injection system. This additional $4500 cost is very similar to the extra cost of our new hybrid system."

The move to add further diesel emissions reduction technology is being driven by the reaction to Volkswagen’s admission of cheating US pollution tests.

A number of European governments and pressure groups are moving towards restricting diesel-powered vehicles in light of increasing evidence that real-world diesel pollution is much worse than laboratory tests suggest.

However, any move to using a hybrid transmission as a mainstream offering is at least four years away. Such a decision would require Hyundai and Kia’s mainstream front-drive platforms to be redesigned to accommodate a small lithium-polymer battery pack.

"It used to cost around $50 [at factory prices] to increase fuel efficiency by around 1%. Today that premium has doubled or even tripled, as making fuel efficiency gains becomes more difficult."

The Ioniq’s transmission is an otherwise conventional six-speed dual-clutch transmission hooked up to a new-generation 1.6-litre GDI petrol engine and a 43bhp electric motor.

Yang says that the use of the DCT eliminates the lazy "elastic band" engine response that is common with conventional hybrids and actively disliked by many drivers. "We are the first company to get the DCT to work with a hybrid drivetrain. The key was to eliminate the delay when shifting gears."

The Ioniq’s single-motor architecture is also said to be significantly more efficient when the car is running at motorway speeds.

A total of 26 Hyundai and Kia brand eco-friendly models will be launched between now and 2020. As well as using this new hybrid transmission, the companies are also working on a 48V "mild hybrid" transmission that uses a conventional petrol engine assisted by a large starter/generator motor. 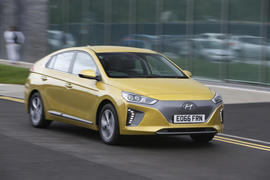