BACK TO ALL OPINION BLOGS
Currently reading: Cropley on cars: Selling reinvented, by Hyundai
UP NEXT
Opinion: Nascar's lions ready to Roar before the 24

Hyundai believes that a dramatic shake-up of modern dealerships is required to properly engage with new customers, according to the company's CEO
Share
Close
Share story

Hyundai and its turbocharged CEO, Tony Whitehorn, believe they are about to change the buying habits of UK customers forever, when “a new innovative retail experience” becomes part of their car-selling armoury later this year.

Whitehorn, one of the country’s most creative car-men, won’t give specifics about his rule-breaking except to say the new deal provides an alternative to the classic car-buying procedure of finding information on the net before visiting a dealership to drive a demo car and complete the deal.

The idea is being trialled here for probable use by Hyundai in wider Europe. Whitehorn is confident they’ll have confirmed its effectiveness by the turn of the year, so it can start generating big business. He believes it pioneers a method customers might use to buy cars for many years to come.

The new selling technique is preceded by a remarkable change in Hyundai’s corporate identity, so dealerships will turn brown (see pic). “We want to interrupt people,” says Whitehorn. “Dealerships mostly have lots of blues and whites. They all look the same. We want our colour scheme to be unexpected.”

Whitehorn explains that Hyundai UK’s move is an implicit acknowledgement of the huge changes that have already occurred in customer behaviour over recent years, influenced by the web.

Fifteen years ago buyers visited an average of four dealerships before doing a deal, and took 10 weeks to make up their mind. Today their web research means they need visit only average 1.2 dealerships, on average, and the deal is done in 10 days.

Whitehorn has presided over huge expansion in UK Hyundai sales, aided partly by the government’s scrappage scheme. By 2012, sales had climbed 150 per cent in five years — in a market that dropped by 15 per cent.

However, now that Hyundai has joined the UK’s 10 best-selling marques (it was 23rd) expansion will be slower. Sales in 2013 amounted to 80,500 and Whitehorn wants 100,000 before the end of the decade, at which stage Hyundai will be in the top five. 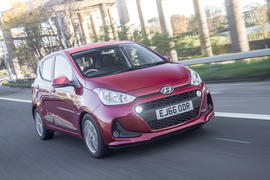 I'll believe it when I see it.

Having been given the runaround by our local (chain) Toyota dealer (yes we have one in stock at another branch; no we don't; we might but we're not sure; it might have done 20k or if might have done 40k; we're not prepared to offer you a sensible trade-in on your car), we decided that the local (locally owned, single premises) Hyundai dealer offered a better car at a better price with a more sensible trade-in value. Two years on Hyundai (just before this earth-shattering announcement) have moved the local sales franchise to - yes, you've guessed it - the (still) Toyota dealer. Fortunately they have kept the other garage as a franchised service and repair centre. One wonders whether any of these great policy statements mean anything (other than that the CEO gets Brownie points for keeping the PR industry active).
Andrew 61 2 March 2014

I am not sure Skoda owners justify their purchase using an anti brand argument. This would suggest there is nothing worthy about their chosen vehicle except it is not an Audi BMW Merc ect and would not buy a brand name vehicle on principal ? I think buyers who could afford any vehicle which fit the bill but don't necessarily feel that the brand models are the default choice are just being sensible. ? And as for Skoda well even Rowan Atkinson is now a member of the club ;-)
Mr Bean, Rowan Atkinson, ditches £3m supercar for a Skoda | Mail ...
vinylnutter 2 March 2014

I think 'just being sensible' is the point.

Skoda's are fine cars ( i have driven more than one) and indeed very sensible and good value and on a 'spreadsheet' basis are a good choice.

However, with a few exceptions they are generally rather characterless and dull cars. I suspect VW has planned this for differentiation purposes!

Assessing cars solely on the basis of 'the numbers' takes no account of the character/soul/charm of a given car, without which its rather like comparing washing machines or other white goods.

I think a balance should be struck between the 'spreadsheet' elements of a car alongside putting a value on the 'how it makes you feel' quotient too.

It seems Kia in particular and Hyundai slightly less so (same i know) are starting to add more interest and character to their cars and perhaps that is part of what 'premium' means?

I notice Skoda fans/buyers tend to be overtly 'anti-brand' seeing it as a rip off and believing themselves somewhat more enlightened than others as a consequence.
I wonder if, over time, this attitude might almost become a brand in itself? Subaru and Mazda are perhaps other proponents of this approach?
I have no objection to this world view, although it places little value less tangible aspects of car ownership. Almost although the best way to choose a car is via a sophisticated spread sheet with all variables weighed and assessed, rather than because you simply like it!
View all comments (10)