BACK TO ALL OPINION BLOGS
Currently reading: Kalle Rovanperä's journey from Toyota Starlet to the WRC
UP NEXT
Opinion: Why the Festival of the Unexceptional is an annual highlight

Kalle Rovanperä's journey from Toyota Starlet to the WRC

The young Finn learned his trade on ice in an old Toyota. Now he leads in a new one
Open gallery
Close

Kalle Rovanperä just missed out on a big record on the recent Arctic Rally Finland. He came within 18 seconds of becoming the youngest-ever winner of a World Rally Championship event – but he still has nearly two years to displace his Toyota team boss, Jari-Matti Latvala, from that benchmark.

And Rovanperä did achieve something equally impressive: he became the youngest driver to ever lead the WRC standings, at the age of just 20.

Colin McRae was 27 when he became the youngest-ever WRC champion in 1995, so the Finn has time on his side to make a very big impression in the history books.

It doesn’t feel like that long ago that Rovanperä became an unwitting YouTube star aged eight by sliding an old Toyota Starlet around a frozen lake with the help of special pedal extensions. Little did he or his father Harri (a former Peugeot and Mitsubishi factory WRC driver) know that he would be driving a much more powerful Toyota only a few years later.

The second-generation Starlet (produced from 1978 to 1984 and known as the P60 among cognoscenti) remains an emblematic car in Finnish rallying, being rear-wheel drive, cheap and plentiful. It’s probably no exaggeration to even call it Finland’s answer to the Mk2 Ford Escort, given that so many Finnish drivers cut their teeth in one. 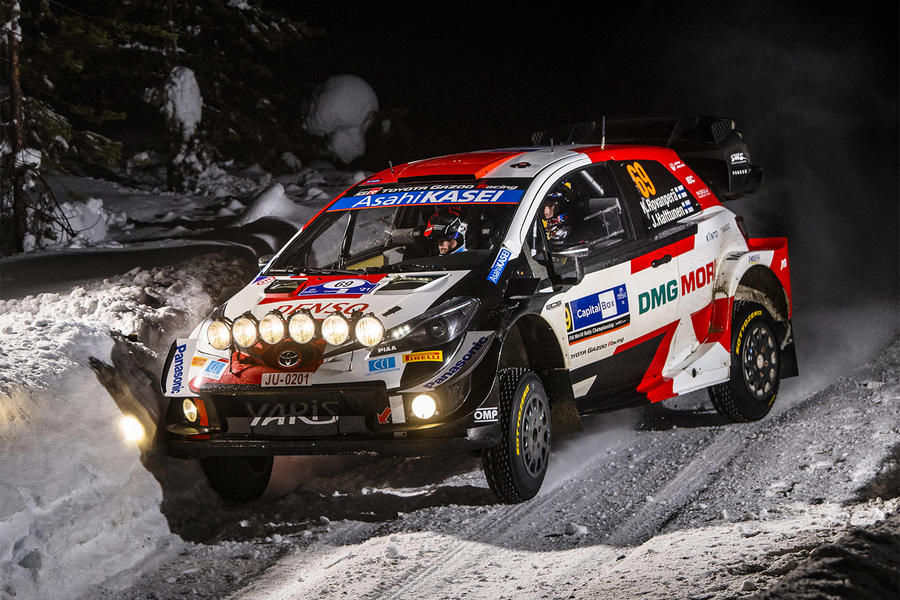 Apparently there are nearly 4500 trees for every person in Finland, putting the total at something close to 22 billion. The number of crumpled Starlet badges in those forests is probably just as staggering. Having driven one of these rally specials a few years ago, I can confidently say that the P60 Starlet is the most underrated car on the road.

Rovanperä has always had a knack of getting the best out of small cars, though. He started international rallying in Italy before he was old enough to have a road car licence, getting dispensation for his co-driver to drive the road sections during the rally weekend only. But this was obviously a problem on the recce, where the driver normally drives and dictates pace notes to the co-driver, who writes them down from the passenger seat.

Rovanperä’s solution? He got hold of a right-hand-drive Fiat Panda and had his dad drive on the recce, leaving him to dictate the pace notes from the driver’s perspective in the left-front seat, while his co-driver, installed in the back, wrote them down.

From the most unlikely shopping cars, such as Starlets and Pandas, heroes are occasionally made. Never underestimate them.

Just a note, Toyota has been the best selling car bran in Finland for as long I can remember. They took over from Ford around the time when Ford stopped selling the Cortina after mk III (for quality issues).

So there were a few Starlets around eventhough the Corolla was more popular. During the times of Mikkola, Vatanen etc. everybody drove an Escort but the Toyota become an option, too.

We have a lot of empty road as the country is nearly as large as France in size, but only population of 5.5 million - more like in Scotland.

The rally drivers usually come from the more rural areas. A lot of people have something we call "field cars". Childen - often boys - drive these old, unregistered cars on the farming fields. And during the winters on the frozen lakes, too. Please remember have have about 168 000 lakes that are bigger 500 sq. meters. In the winter time, we even have offial roads crossing some bigger lakes to take short cuts between some tows. And thereis one official '"ice road" from the coast to a bigger island over the see - some 10 km. Normally two ferries run in there, but in winter an official road on the sea ice.

Nissan started their European business in Finland. As most of the Japanese manufacturers at the time. We become their home market in Europe.

Finland have had one factory for making passenger cars since late 1960's. It was Saab 99 and 96 first. Then the popular 900 series. All the Saabs sold to England were made in Finland I think. And all Saab cabriolets were made only in Finland  - never is Sweden. Also Talbot Horizon was made when the 96 became finally dated.

Since then the same factory has made Opel/Vauxhall Calibras, all the Porsche Boxters (mk I and II) and nowadays Mercedes A and GLC types. But as said above, Toyota has sold of lot of Corollas and Avensises in here. The car park full of Japanice, Korean and Skodas as people prefer cheaper and smaller cars in here.

PS. The last Saab cabriolet model was made in Austria. The previous models in Finland.

Also a couple of V8 prototypes engines were made in Finland.  One is in the Saab museum in the Uusikaupunki museum. The engine was made from two four cylinder Saab engines and the plan was to sell them in the USA.

Uusikaupunki is the town where the factory is. The museum is beside the main gate of the factory. A lot of Saabs on show. Recommended.