BACK TO ALL OPINION BLOGS
Currently reading: Racing lines: What it was like to be in the booth with Murray
UP NEXT
Autocar's favourite racing drivers: Kamui Kobayashi

Racing lines: What it was like to be in the booth with Murray

The outpouring of heartfelt tributes for Murray Walker, who died this month aged 97, were both predictable and entirely justified. He was, quite simply, one of sport’s greatest TV commentators, among a golden generation of wonderful voices: David Coleman, Peter Alliss, Peter O’Sullevan, Bill McLaren, Ted Lowe, Harry Carpenter and more. Like such peers, Walker’s voice somehow captured the essence of his sport. Something to do with the “trousers on fire” delivery, as Clive James so memorably put it.

But what really made Walker special was the man himself. In person, he was just as lovely, enthusiastic, friendly and good humoured as you hoped he’d be. “Superlative”, in fact. More so than many racing ‘gods’ he’d describe as such. The tentenths voice of motorsport for ever after? Oh yes. And its beating heart and soul, too.

Man behind the mic

I was lucky enough to watch him in action on one unforgettable occasion. It was the 2007 European Grand Prix at the Nürburgring and Walker was called back from retirement to sub for BBC Radio 5 Live’s regular guy, who was away on paternity leave. An inspired decision. I didn’t need asking twice when producer Jason Swales invited me to witness the return, squeezing into the back of the cramped commentary booth behind the great man and co-commentator Maurice Hamilton.

The memory still sends a shiver. Just before it was time to broadcast, Walker – a mere 84 at the time – began limbering up, stretching his shoulders and arms as his adrenaline began to pump. Swales cued in Fleetwood Mac’s The Chain and as the staccato guitar built to its signature climax, Walker came in flat chat to proclaim: “They’re playing my tune!” Just wonderful – and we all stifled a natural instinct to cheer.

By happy chance, the race turned out to be one of utter chaos as a biblical rainstorm left a bunch of cars, including Lewis Hamilton’s McLaren, skating off into the gravel at Turn 1. Walker was on the limiter throughout, especially when Markus Winkelhock, in what turned out to be his only grand prix, briefly found himself in the lead in a Spyker (what today is an Aston Martin). Confusion reigned (or should that be rained?), but while the hapless drivers tiptoed through the puddles, Walker never lifted – until the studio back in London chose to switch from the grand prix to a tennis match at the French Open. Walker was furious. He banged the desk in a temper and huffed and puffed, as Swales gave both barrels to the studio, demanding they be put back on air. Who cares about tennis? An F1 thriller was playing out in front of us and 5 Live’s listeners were missing out on pure Murray gold. Beside him, old friend Maurice was crumpled over in stitches. You could have cut the atmosphere with a cricket stump. 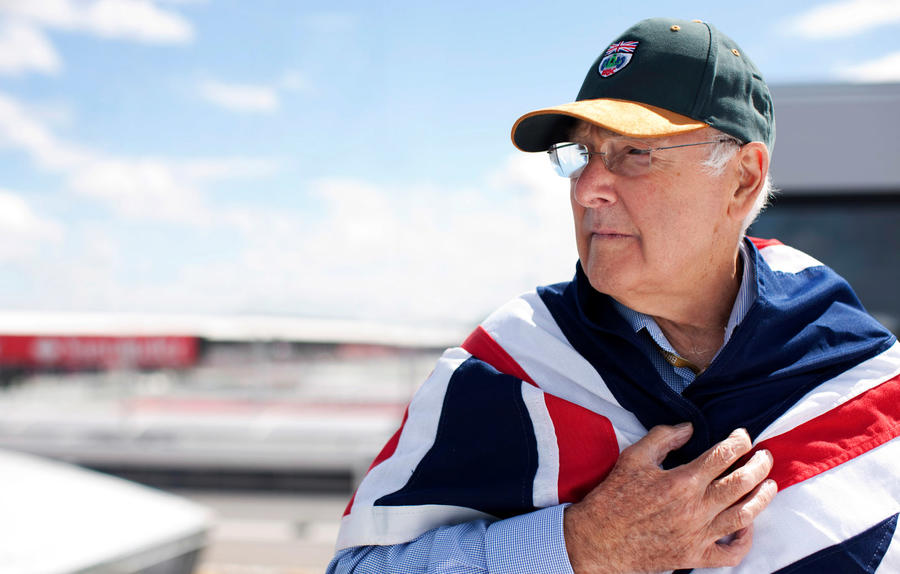 The race passed all too rapidly and once Walker signed off, we erupted in a round of applause. The great man turned with a sweet smile, acknowledged my presence with surprise (he’d been too focused to notice I was there) and immediately started to debrief. Bloody tennis. The man was back in his element and it had been a privilege to witness.

A force beyond F1

Walker’s unlikely, and at first tense, partnership with chalk-and-cheese James Hunt is rightly recalled as the defining professional relationship of his broadcasting life, beside the bonds he formed with both Nigel Mansell and Damon Hill. But while grand prix racing was central to his years behind the mic, what further endeared Murray to enthusiasts was his absolute commitment to all forms of motorsport – and he treated all racers with equal reverence and respect, as he would Ayrton Senna, Alain Prost and the like.

He professed motorcycling as his first love, in the wake of his beloved father Graham’s successful career on two wheels and his own early exploits that he wisely abandoned to follow the old man into broadcasting. And while plummy Raymond Baxter was the established BBC voice of motorsport from the 1950s through most of the 1970s, Walker was more than happy to plunge into everything from rallycross to rallysprints, Formula 3 to the British Touring Car Championship, before, during and throughout his emergence as Baxter’s natural heir when the Beeb finally started showing F1 full-time from 1978.

BTCC owes him a debt

Steve Rider, long-time friend and BBC Grandstand colleague, credits Walker for his significant role in the BTCC boom of the 1990s that was fuelled by their perfectly crafted TV coverage. It was Walker, along with Rider and Tiff Needell, who convinced the BBC to expand its tin-top broadcasts as the BTCC transitioned from Group A to Super Touring, and his signature high-octane delivery made all the difference – even if the so-called ‘Murrayisms’ were more scripted than his endearingly accidental F1 gems and bloopers.

“We sat in the edit suite for three days after every race,” recalls Rider. “Murray would come in on the Wednesday to dub it, which would take two days. He’d insist on a very nice hotel in London and would dub it to perfection.”

Rider describes his old friend as “absolutely on the button”, and Murray’s ingrained commercial nous, born from his successful career in advertising, was an added bonus to his natural professionalism. “He’d smuggle stuff past the BBC,” chuckles Rider. “For example: ‘Did you ever think you’d see a Volvo pass a BMW around Clearways?’ We inserted that line when they were about to lob a ton more money into the pot. Less than subtle.” But effective, as he always was when it came to saying the right thing (and sometimes the wrong thing, too).

Now if you’ll forgive me, to borrow one more classic line from the maestro, it’s time to stop – because I have a lump in my throat.

Someone should do a Book with all Murray Walkers famous/ infamous quotes?