BACK TO ALL OPINION BLOGS
Currently reading: Motoring lessons from the seat of a 117-year-old car
UP NEXT
Steve Cropley: Name a better sub-£40k buy than a manual Audi R8

Motoring lessons from the seat of a 117-year-old car

Coat and jacket off. One corner of the cover up. Another one released. Pull back. And repeat. Fold one way, then the next. Lid up. Contents out. Lid down. One screw, second screw, bonnet forward. Another lid open. Gas tank revealed. Gas tap on, match lit, wooden splint burning and… it burns out. Repeat until gas flame is lit.

Restored under Worth’s ownership by Wood Brothers and the team at Fairbourne Carriages, it is the car’s lustre (five coats of varnish) and detail (eight coachlines per wheel spoke, 16 spokes per wheel, each requiring three layers of paint) that stand out. Some of those coachlines are out of shape, but only because during the restoration they found the originals and elected to keep them. 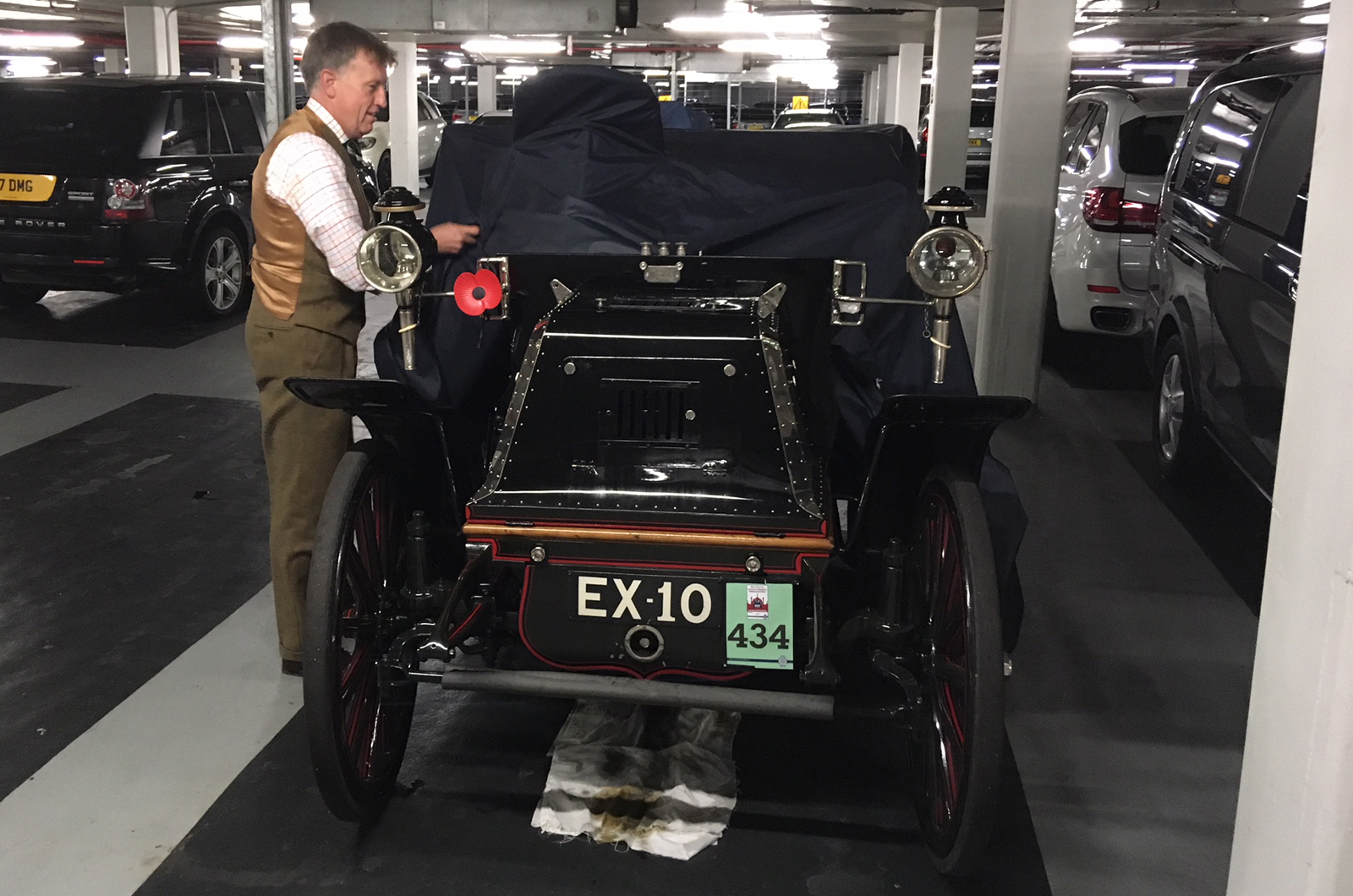 Similarly, just like archaeologists uncovering forgotten treasures, a monogram was uncovered beneath layers of paintwork. Worth’s detective work tracked the initials - EE - to Ernest Estcourt, a wealthy builder, who was one of Britain’s first car owners. You might expect a 117-year-old car to ooze history but, as the 6hp, two-cylinder engine cranks into life, the moment becomes all the more special: EX10 isn’t just a preserved moment in time, it is a living, moving testament to former times and the hard work and dedication of an owner and team who evidently cherish it.

We’re here in the cold and dark at 5.30am to prepare for the London to Brighton Veteran Car run, of course, celebrating the 121st anniversary of the first running of the event in celebration of the repeal of the Red Flag Act, which had required motor vehicles (“mechanically-driven carriages”) to be preceded by someone waving a red flag or ringing a bell, to warn of the impending danger of a moving vehicle.

John is kindly carrying three passengers as guests of event sponsor Hiscox, and if the theatre of the start-up procedure (spark plugs were yet to be invented, although the gas tank is a modern-day adaptation on practical and safety grounds) is anything to go by we are all in for a day to remember. The last job before we get going is to light the candles that sit inside the headlights. They may not cast much light onto the road ahead, but they are surprisingly bright. “They’d had a fair few years to perfect lanterns by then,” smiles John, reminding me that while the idea of the motor car (autocar) was new, they were ultimately the sum of many other well-known technologies.

In some regards, the 65 miles that follow as we wind our way from Hyde Park at 7.30am to Madeira Drive in Brighton for 2.30pm are remarkably normal. For all its prestige, EX10 is still a car: four wheels, an engine, clutch, brake, accelerator, four gears in either direction and even room for four (or five, but for the fuel, water, oil and tools we carry). There's even a round steering wheel; something many of the cars taking part forgo for a tiller. Not everything we take for granted today was a given. It’s a realisation that distils the oft-quoted creed of today that the car industry is, courtesy of electrification and autonomy, about to undergo its biggest change in 100 or more years. 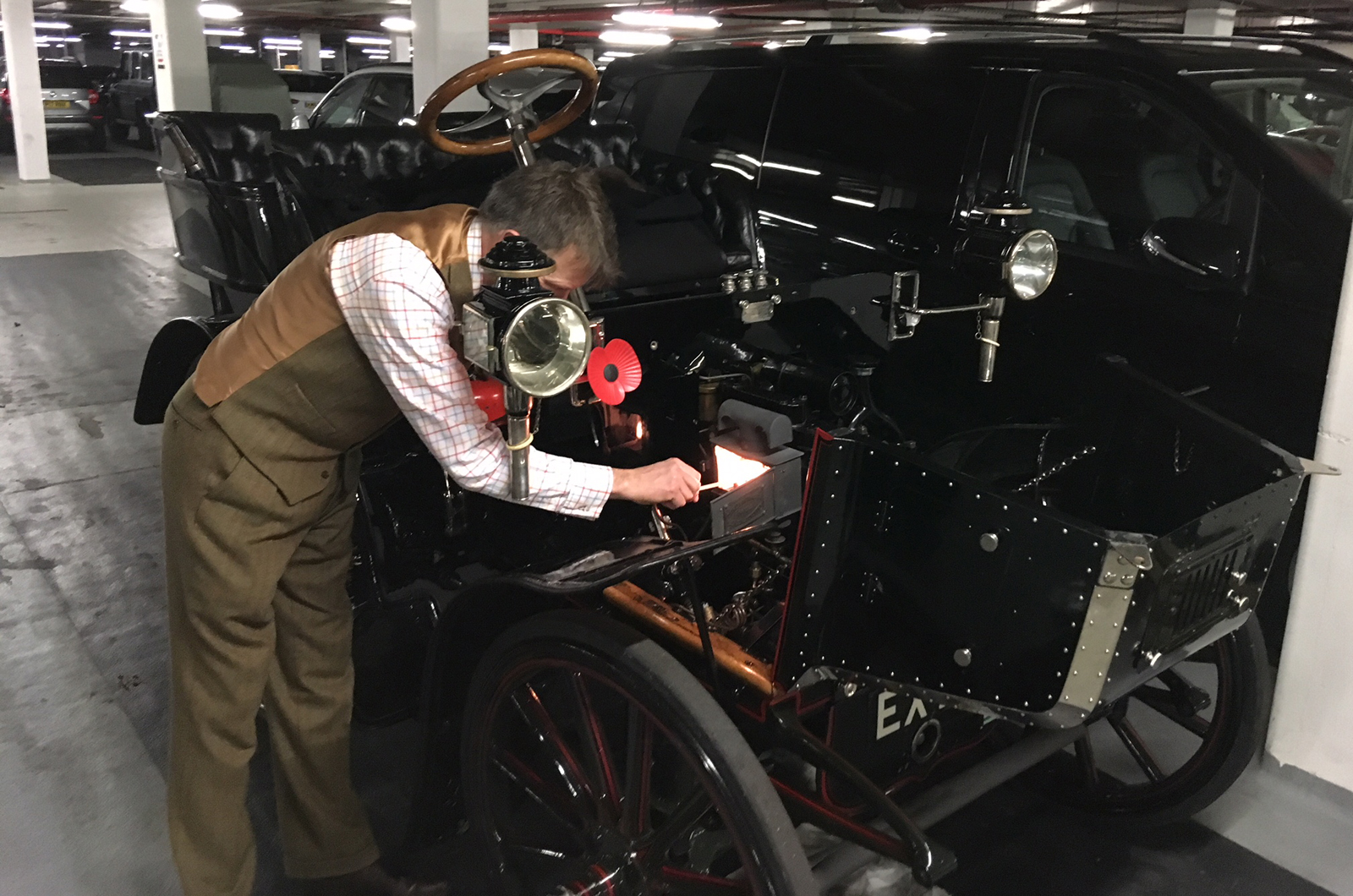 But, of course, the sensations are anything but familiar. The chain driving us along clatters, the cold wind smacks us in the face, the delicacy (and sometimes a bit of force) with which John guides us onwards far in excess of our cosseted driving lives today. “Momentum is key,” smiles John as he winds his way through traffic, both modern and veteran, dodging round queues in a quest to keep up his hard-earned pace. When you only have a top speed of around 25mph to play with, you value every one of them.

A seven-hour journey over 65 miles might sound like hell to a modern traveller, but the sights and sounds of the event never cease to thrill over the entire journey. The car is special, the company likewise, and the crowds who come out to cheer on the event - many in their own classic cars and in groups organised by owners’ clubs - turn it into a carnival.

Quite how the RAC Club manages to put on such a well-run show for 450 cars, all more than 100 years old, some powered by petrol, some by steam and others by electricity, all on the open roads, is something of a mystery. Of course, not all of the cars make it to their destination, but that too adds to the spirit of adventure, as drivers, passengers and a team of volunteer RAC patrolmen, aided by an amazing volunteer marshal workforce, all come together to create an oh-so-special atmosphere.

Having never even watched the event before, I had always thought it was really run for the benefit of those taking part. I could not be more wrong. There is all the period drama (and clothing) of the Goodwood Revival but it is set free on the open roads. You can’t just say that an event is “better than Goodwood” - life isn’t that simple, nor binary - but for some, I have no doubt this event would be. Next year, diary permitting, I’ll be packing the family up and parking at the roadside to watch. It’ll be a grand day out.

For now, though, as we trundle into Brighton, the adventure is coming to an end. Historians will know that Harry Lawson, who founded Daimler as the UK’s first car company, is rarely widely celebrated today, having died in disgrace after defrauding investors in many of his early motoring initiatives. But his one great success was founding the Daimler Motor Company in Coventry, and in doing so he not only created cars like Worth’s but he also uncorked the spirit of adventure and innovation that inspires our industry to this day.