BACK TO ALL OPINION BLOGS
Currently reading: Citroen’s Teutonic marketing is firmly in the past
UP NEXT
Could used be better than new for KTM’s freak four-wheeler?

Citroen’s Teutonic marketing is firmly in the past

Back in 2008 Citroen launched the current generation of the C5. Complete with sharp lines, it not only looked German, it was launched with the tagline “Unmistakably German”. This seemed a very odd tactic at the time for a company that had always prided itself on its quirky, French approach, and it doesn’t seem any less odd with the passing of time.

It is set to remain a strange anomaly in the company’s history, now, because company boss Linda Jackson has made it very clear that the approach is one that will not be repeated.

“That was a different era,” she said. “Harping back to 2008 I think it is not relevant to where we are going now.”

Even though seven years might seem like a long time in marketing, and Citroen is keen to make it clear this was before the new approach, this is still within the current car’s life cycle so will be remembered by many current owners and observers. Jackson is stopping short of saying the German marketing was a mistake, but she said it is not something that Citroen is dwelling on: “We have to forget that, we have a clear strategy.”

This new strategy is not groundbreaking, with Jackson saying: “We want to be mainstream, we want to be desirable to our customer.”

However, she also was keen to stress that a little of that flair is on its way back: “I want to get back to what we were really good at, which was vehicles with great designs that stood out.”

Standing out means there is no chance of Citroen following Audi’s safety first approach to replacing models, as with the A4, which will come as a relief to fans of interesting and adventurous design. 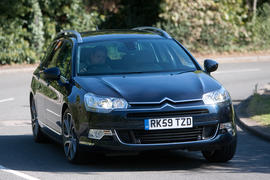 I doubt there will be another

The Xantia was a fine car with just enough gallic charm, the mk1 C5 was a bit ugly. I can see them noticing that the only D segment saloon sales now are German, and so pitching the mk2 C5 as such. However nobody buys a big Citroen because they want a German car.

21 September 2015
The C5 (or something like it) will be needed for the Chinese market, so I am sure another large saloon is on the way. Whether or not it makes it to the UK remains to be seen. I thought the C5 might make a savvy used buy, but as they are all diesel I would stay well clear.

German brands have a golden

21 September 2015
German brands have a golden image.
That's all.

22 September 2015
It was always a ridiculous idea. If I wanted a German car I'd buy one.

Going for the German image

22 September 2015
Going for the German image nowadays is tantamount to admitting DEFEAT!

23 September 2015
People are nowadays tolerant with the german constructors.
German are still über alles according many people.
It's a fact.