BACK TO ALL OPINION BLOGS
Currently reading: Opinion - Why can't we drive kei cars in the UK?
UP NEXT
Steve Cropley: Why Abarths are unsung hill-climb heroes

Opinion - Why can't we drive kei cars in the UK?

Kei is the name given to cars with an engine no larger than 660cc in capacity, no more power than 63bhp, and a footprint no greater than 3400mm long and 1500mm wide. Every Tokyo motor show seems to throw up new models that show off Japanese automotive creativity at its weird and wonderful best.

What puzzles me is that, no matter how often we eulogise about how wonderful kei cars are, exports further afield never materialise, and nor are they likely to do so.

Shame. For I, like many other commentators, genuinely feel kei cars have huge potential in London and Europe’s over-crowded urban hotspots. I understand there are safety regulations to consider, but what's good for Tokyo should be good for us. It’s that width figure as much as anything that steals the headlines for me.

New cars might be getting lower and lighter, and sometimes even shorter, but the one thing they never are is narrower. Cars around two metres in width are becoming the norm. At the same time, urban roads in major cities such as London have not got any wider to compensate.

When driving into central London, I do so via the M4 and A4. Past the Hammersmith Flyover and Earls Court, the three narrow lanes become two narrow lanes, and at all times you really have to be alert and on guard to make sure you keep within your lane. There is little margin for error, and, as I’m sure you know, other motorists aren’t as well behaved as you or me.

You only need a daydreaming National Express driver on his way to Exeter or an errant Land Rover Freelander to go walkabout to be on your brakes, thereby causing all those behind you to do the same. Thanks to all those in question on the A4 on Sunday night…

Now if only everyone was driving around in such wonders as the Daihatsu D-Base concept, the Nissan Teatro for Dayz, the Suzuki Mighty Deck or Air Triser, then Londoners could waft around in their narrow lanes as much as they liked without impeding motorists in others.

We can only dream. 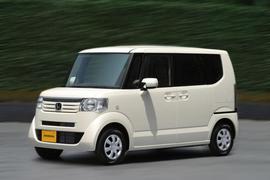 The Honda N Box is Japan's best-selling kei car, and is underpinning the firm's current upturn in financial fortunes

In the Leeds-Bradford area

27 October 2015
In the Leeds-Bradford area where I live and work, the powers that be seem determined to reduce road width, never mind increase it in line with ever expanding vehicles. Sometimes its to shoehorn in some ill-conceived cycle lane, but mostly there seems to be no apparent reason for increasing the width of pavements, traffic islands and central reservations. Surely it is better to use all the available road width, keep traffic moving and thus reduce congestion and emmissions?

7 November 2015
Associating congestion with increased cycle lanes and wider footpaths isn't much of an argument. What about people who buy cars that are much too big for their requirements? Or those who seem take up the roads for small journeys that could be accomplished on foot? And finally, not forgetting the people who should never have been issued a licence due to their dreadful driving skills.

Wider roads would simply mean more idiots filling them up with their faux by faux. Maybe your council is simply trying to encourage people to get off their fat arses and not rely on the car as much.

They have been sold here

27 October 2015
They have been sold here before - the Suzuki Capppucino, Daihatsu Copen, etc. You can also buy the Kei version of the Caterham 7 here.

Look how popular they are

The average price for a Copen on autotrader is around £4000. For ten year old cars with a manufacturer that has pulled out of the country that's pretty good going.

It has surprised me that one of the Japanese car manufacturers still in the UK hasn't done a deal with Daihatsu to bring the second generation Copen over here.

With Fiat selling four or five times as many 500s and Pandas you'd have thought other manufacturers would be keen to introduce style-focused models based on their city cars yet very few have, and those that have them already haven't imported them.

27 October 2015
to do with the manufacturers not wanting to kill the golden goose by introducing Europe's most debt-happy, credulous, brand-aware, status-obsessed motorists to the concept of small cars with even smaller margins?

27 October 2015
You can bet your last dollar, that were these narrow cars become the norm, the stupid legislators would try to squeeze another lane in and you'd be back to square one !1

27 October 2015
Kei cars, fresh in concept and innovative in design, make the Smart irrelevant and superfluous. I totally agree that modern cars are too wide, even city cars such as the Toyota iQ, and in cities like Paris (where for some reason the iQ is popular), a Kei would be able to drive into courtyards of buildings thus freeing up off-street parking spaces. Furthermore, in narrow London streets, a Kei would be able to squeeze past parked Prius (badly parked cars seem always to be Prius & Merc E class) waiting to pick up passengers. In fact, with many Kei models already in production, who needs Up?

27 October 2015
If there profit margins aren't particularly high (which tends to be true for small cars) there would be little in it for a manufacturer to export them unless they up the price past what most people would pay for a small car. They are great and I think that locally-produced ones would be wonderful in urban areas but Brussels doesn't agree as it likes cars bulky to protect pedestrians instead of keeping pedestrians out of the roadway.

27 October 2015
Original Mini would fit within Kei size. Maybe there needs to be a rebirth. Small but perfectly formed.

2 August 2016
The ideal for a European Kei Car would increase the engine size of the existing Japanese Kei Cars and power limit to 750-800cc and 75-80 hp maximum respectively, whilst ditching the post-1998 Tall Wagon bodied variants.

The European Kei Cars would have an electronically limited maximum speed of around 80-90 mph, with the more sportier version emphasizing acceleration to 0-60 or from 0 up to limited top-speed.