BACK TO ALL OPINION BLOGS
Currently reading: Electric scooters rule Shanghai, but electric cars are playing catch-up
UP NEXT
Opinion: Why Tavares can make Stellantis succeed

The adoption of electric vehicle power is on the rise in China's urban centres, but four wheels still have a lot of work to do to catch up with two
Share
Open gallery
Close
Share story

As our battered shuttle bus bumped smokily through the traffic from Shanghai Pu Dong Airport to our hotel in the centre of the city yesterday, we drew up alongside a line of eye-catchingly vivid blue cars.

The cars in question were Volkswagen e-Ups, travelling line astern and standing out against the rash of black, silver and grey saloons in the city.

They were not strictly passenger cars; each was driven by an immaculately dressed, white-gloved chauffeur, presumably ferrying very important people who are in town for the Shanghai motor show.

It would have been a moment of stage-managed perfection on the part of Volkswagen, my host for tomorrow’s show, were it not entirely coincidental that our bus happened to be in the area.

This is my first visit here, and I’d been braced for a sensory assault from the traffic. In fact, during a stroll around the Bund district, I was surprised by the amount of quiet electric and hybrid vehicles on the road.

China is aggressively pushing EVs. Although they are by no means the answer to all of the challenges the nation faces – the methods by which the electricity is produced in the first place is another matter altogether – year-on-year sales of EVs are on the rise.

As in Europe, though, EVs are coming from such a low base that the numbers aren’t yet particularly significant when you consider the size of the market. I stress the word yet – national and local government is introducing all kinds of tax breaks and incentives to further boost sales.

More prevalent in Shanghai are electric scooters. I can say from first-hand experience that these present something of a hazard to inattentive foreigners, mounting silent, unseen attacks in the way that a sparrow hawk dives upon an unsuspecting field vole.

These electric scooters are of a simple construction and the majority of them look extremely well used. They seem like a great idea: if you want to get across Shanghai, it doesn’t matter whether your car is powered by petrol, electricity or boiled dumplings – you’ll be stuck in traffic. On an electric scooter, you can whizz around with abandon.

I’d imagine it’d be easier to find a charging point at your journey’s end too; most of the scooters we saw appeared to plug into conventional Chinese sockets, and many had removable battery packs that can be lugged into your home for recharging.

It will be interesting to see how new electric and hybrid vehicles are greeted when the Shanghai motor show opens tomorrow. Local manufacturers Changan and Zoyte are showing off electric concepts, while the likes of Audi, Peugeot and Volkswagen also have EVs and hybrids on their stands.

Wonder if anyone has a snazzy, but cheap to own, electric scooter in the works. It still seems the ideal way to combat Shanghai’s issues of traffic congestion and air pollution. 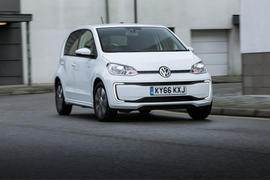 Please allow people to put paragraphs into their comments...learning HTML on the off chance it'll work is going to get in the way of correcting Norma Smellons.
Norma Smellons 22 April 2015

Actually, you made no reference to NO, only to CO2. But that is scarcely the point; pollution does not respect boundaries. It is a measure of how far AGW dogmatism has progressed that people such as yourself are entirely relaxed about increasing deadly particulate emissions, so long as this occurs outside urban areas. And again, there is no evidence that reducing CO2 emissions (or creating coal-based emissions in lieu of them) would produce any kind of desirable objective for mankind. What China happens to be investing in, at the moment, is neither here nor there. It certainly does not imply a wondrous enlightening of their attitude re the environment. And I must say, the Guardian is not a place I might turn to for plausible conjecture about the environment. For Marxism thinly dressed as environmentalism - yes. But not for the facts as facts are generally understood.
Phil R 23 April 2015

@Norma Smellons: Where does one begin...

Actually, you made no reference to NO, only to CO2. I did: I talked about pollution, it's an umbrella term. It is a measure of how far AGW dogmatism has progressed that people such as yourself are entirely relaxed about increasing deadly particulate emissions, so long as this occurs outside urban areas. Absolutely, I'd prefer to have no negative impact but I would much rather affect 1,000 people rather than 5,000,000 people. And again, there is no evidence that reducing CO2 emissions (or creating coal-based emissions in lieu of them) would produce any kind of desirable objective for mankind. There is a vast quantity of peer reviewed evidence over the last 40 years where the bell curve suggests that we are. On the 10% chance that all of this wrong, we avoid going to war for oil (is that not a singular reason enough to do this?), rising energy prices through the use of a finite resource. What China happens to be investing in, at the moment, is neither here nor there. As they are 1/6 of the world's population, the next dominant superpower, I think it does matter a lot more rather than "Here nor there". And I must say, the Guardian is not a place I might turn to for plausible conjecture about the environment. For Marxism thinly dressed as environmentalism - yes. But not for the facts as facts are generally understood. I'm not a massive fan of the Guardian either, but I did mention Forbes et al, as when you put that term into Google you get at least 15 pages (I gave up looking after that...) showing facts about how China has the fastest growth rate of investing into renewables.
scrap 24 April 2015

'AGW dogmatism', as you put

'AGW dogmatism', as you put it, is in fact the consensus view of just about every respected scientific establishment. You are discrediting and embarrassing yourself here.
Norma Smellons 22 April 2015

Points 1) and 2) are worthless. This is because 1) Vehicular CO2 is not harmful to human health. In fact, there is no hard evidence - anywhere - confirming that CO2 itself causes the ills which AGW nutcases attribute to it. So, 2) removing CO2 from the urban environment achieves nothing. The particulates from coal, however, are some of the most deadly known to man. But putting all the facts to one side, if you regard CO2 as such an evil then why defend the biggest producer of it?
Phil R 22 April 2015

I never said CO2 was harmful to human health. I said that an electric car powered by coal is still a massive reduction in CO2, especially when one considers the amount of CO2 produced in refining petrol and diesel.

I said removing particulates and other emissions such as NO from urban environments is a good thing. I agree that most likely the burning of coal is not a clean process, but firstly you can put filters on a coal power station and burn it as cleanly as possible, but secondly, and mostly, Coal power stations tend to be near coal mines, not in cities. I'll be honest, I don't know how many coal power stations there are in central shanghai, but I suspect it's none. I do know for certain that there are now none in Central London.

I didn't defend China on it, I merely pointed out what is true, that they're investing massively into renewables. Google "China Renewable Investment" and see the articles from Forbes, the Guardian et al.