BACK TO ALL OPINION BLOGS
Currently reading: Audi's new headlights are good enough to play a movie
UP NEXT
Matt Prior: Where have all the practical fast cars gone?

Audi's new headlights are good enough to play a movie

Innovative digital matrix lighting on E-tron Sportback may do an uncanny impression of a cinema projector, but it gets truly clever on the motorway
Open gallery
Close

A €4000 (£3430) pair of headlights might not seem the most enticing option on the extras list to tick when specifying your Audi E-tron Sportback, but a demonstration of the new digital matrix units in action shows real innovation in a crucial yet often overlooked area.

Whereas to now headlights have evolved generally to become brighter and shine greater distances through different lighting technologies, the digital matrix headlights break away from that by using projector technology to become more than just a means of lighting the road ahead. The technology, which uses 1.3 million micromirrors that can be tilted up to 5000 times per second, is just like that used to project films; Audi says that in theory, you could play one through the headlights.

For now, it has a gimmicky side in an ability to play little light shows as you get in and out of the car, either projected onto a wall or the ground in front, depending on when you park, and customised greetings are an obvious next step.

Yet the real functional use for the technology comes when you’re on the motorway, or any other road with marked lanes, where the headlights will project a ‘light carpet’ in your lane. Within that flood of light are two rows of six chevrons to show the width of your car relative to the extremities of the lane, to help you position yourself in the centre. That could be useful if you’re travelling next to a lorry through roadworks with narrowed lanes, for example. 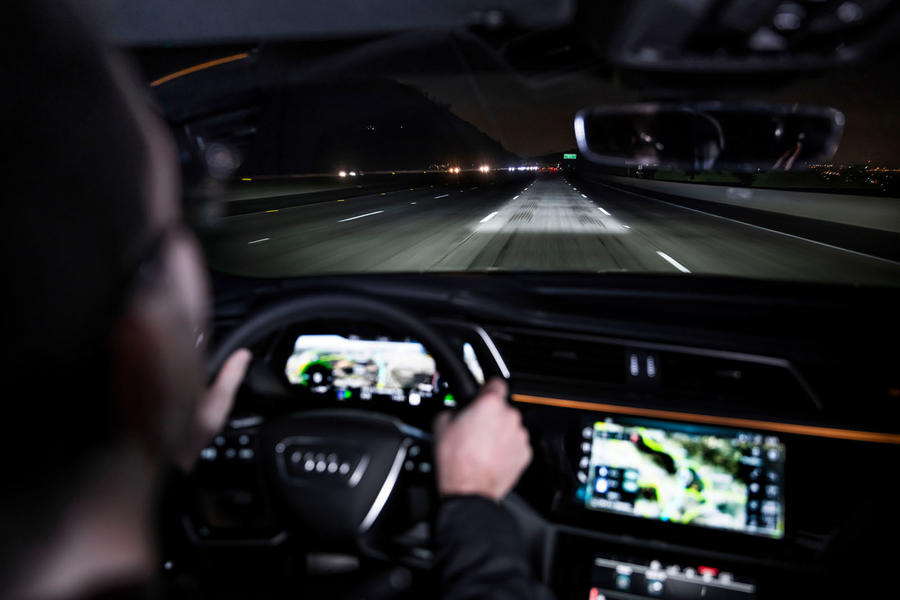 Should you get too close to the vehicle in front or someone pull into where your ‘light carpet’ and chevrons are, the lights are automatically pulled back so as not to the blind the driver in front. It’s the same for oncoming traffic, who don’t get the effect of your lights being so bright, because it’s used only to light the lane in front and not the surrounding area. Should you change lane, the lights illuminate that lane as well until you’re in it. Clever stuff.

As for a ride in the car itself, from the passenger seat there’s very little to distinguish the E-tron Sportback from the regular Audi E-tron. It’s brisk yet quiet; supremely refined, as all big, powerful electric cars are; yet also unable to hide its sheer mass when going over bigger bumps in the road, sending the chevrons lighting the way ahead shaking.

For now, the digital matrix headlights are offered on the E-tron Sportback only, but they'll soon make it onto the E-tron as well, followed by the Audi A8 and Audi A7 Sportback. Despite the price, Audi expects uptake to be strong among buyers, thanks to their interest in the latest technology.

Lights, all I want are sharp good coverage lights, ok, an auto dip function would be great, I don't want fancy patterns depending on my mood, I'm driving a car not playing a video game.......

£4000 is a lot to pay for something that can only project black and white movies.How much are the colour ones?

If we only ever said good enough we'd still be living in caves!  I don't think I'd pay £4,000 for them but I like the fact they exist.