BACK TO ALL OPINION BLOGS
Currently reading: What’s it like to drive on a sand dune?
UP NEXT
Matt Prior: Sometimes being a car journalist is a pain in the back

What’s it like to drive on a sand dune?

We sampled the new Toyota Hilux in Namibia and learned a few things about desert driving along the way; turns out it's not as easy as it looks…
Share
Open gallery
Close
Share story

I’ll admit it: that first steep-ish ascent on an off-road course on sand dunes looked pretty easy. I’ve done plenty of off-road drives in the UK, so how can driving up a sandy hill be any harder?

But as I slid back down the slope for the third time, I knew the dunes were presenting a different challenge. The alarm bells should have been ringing in the car park when we were told to let down the air in each tyre for a full 60 seconds, after which we were told it wasn’t enough and another 15 seconds' worth of air needed to come out. This was not going to be your normal off-road drive.

And so to driving on sand. We’ve all seen the videos on YouTube of people conquering the Big Red Dune in the United Arab Emirates; it looks spectacular, but how hard can it be? We were in Namibia and driving the new Toyota Hilux across a whole series of large dunes for our experience to find out. 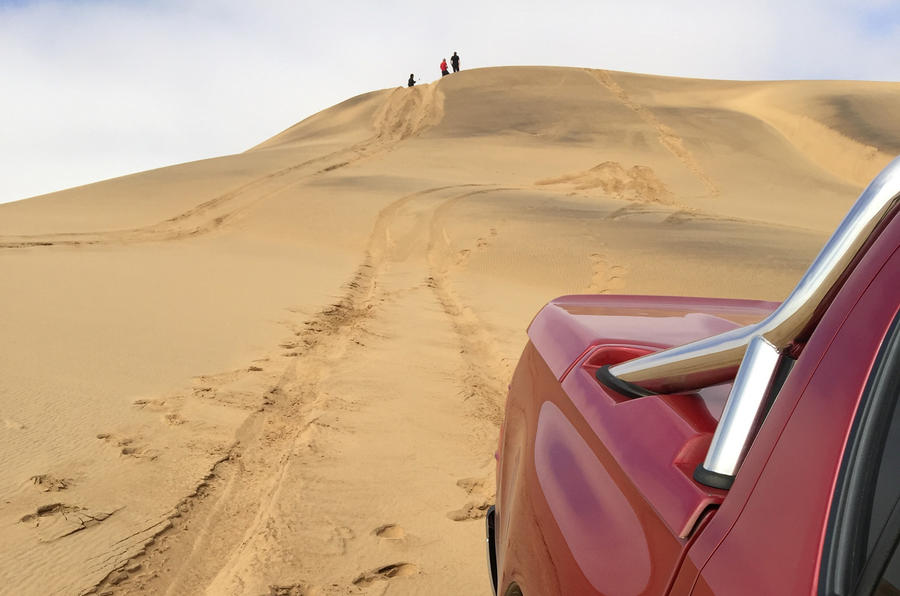 Quite quickly it became clear that you need a run-up and some momentum in order to conquer any steep sandy dune ascent. The Hilux has a low-range, all-wheel drive transmission that needs to be engaged if you're going to have any success getting over the brow of the hill; set off in second gear and quickly into third before plenty of revs to get up to the top.

What the new Land Rover Defender must beat

Then, when you’re at the top, remember not to panic; you’ll probably only see sky, and thus be inclined to slam on the brakes - at which point you'll lose all of your momentum before you've fully conquered the climb. Yours truly is speaking from experience here, so instead, ease off the throttle but keep your momentum so you can shift into first gear in order to start an ascent as steep as the climb you've just finished.

Driving up sand dunes isn't easy, then, but my word is it fun. If you’re into off-road driving in the UK, the usual muddy tracks and water obstacles can often seem to present little in the way of a challenge to the vehicle, but driving on dunes is a challenge both for the driver skill and the vehicle.

And if your vehicle gets stuck trying to get to the top of the largest sand dune, there’s always the option of abandoning ship and running up to the top - the fastest runner took just over two minutes from bottom to top, according to the leader board in our hotel's reception. I swear it took me longer than that to drive up…

After the Ascent comes the

After the Ascent comes the descent.
Bullfinch 23 May 2016

It would be a brave move by JLR to compete head-on with this - and few would blame them for failing to overhaul the Hilux - but more likely, I think, is that they won't bother. A huge disappointment to the fans, no doubt, but sometimes the right thing to do is to recognise when you're beaten.