Italian coachbuilder Zagato is marking its centenary with the unveiling of the V12 Zagato Heritage Twins - an exclusive pair of rebodied Aston Martin models of which just 19 sets will be made.

Based on the previous-generation Vantage V12 S, the Twins will be built by Warwick-based bespoke manufacturer R-Reforged, known for producing the limited-run Vanquish 25 for ex-Aston designer Ian Callum's new independent design consultancy.

Each pair, costing £1.75 million ($2.275 million), comprises a Coupé and a Speedster variant, both with carbonfibre bodyshells and heavily reworked design from front to rear over Aston's original. The Coupé is largely familiar, having first appeared in 2011, but today's unveiling marks the Speedster's debut.

Active aero functionality is one of several new additions for the duo from R-Reforged, which claims to have introduced more than 500 tweaks. It is said to "transform the cars' balance", with minimal impact on the overall design. Visual changes include a reshaped front splitter and new front wing designs, but the Coupé's distinctive double-bubble roof and protruding rear lights remain. 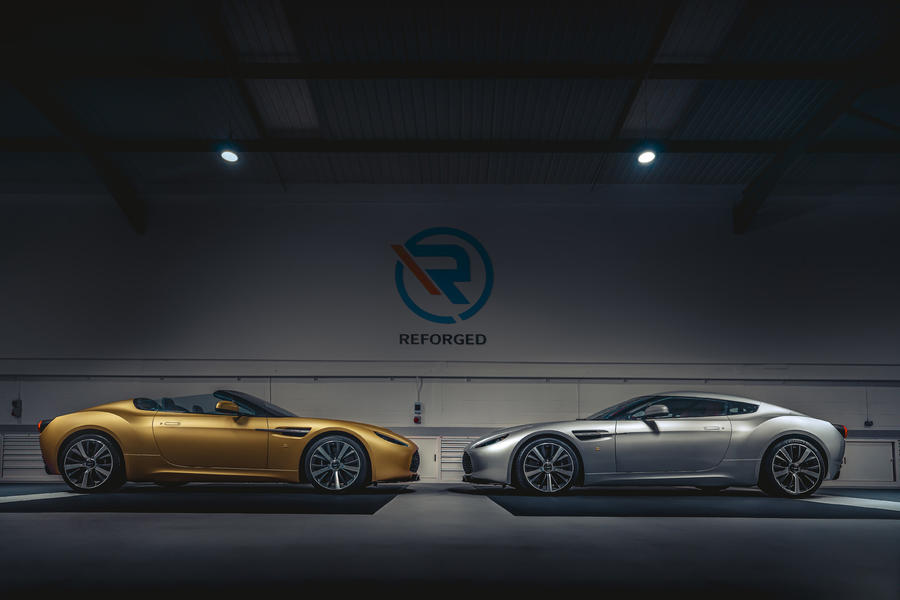 The Speedster, meanwhile - as the name suggests - swaps the hard-top for an open-roof design that brings prominent buttresses along the rear deck and a longer, sleeker windscreen.

The changes go under the skin, too: the Vantage's 5.9-litre 12-cylinder motor has been boosted from 525bhp to 600bhp by way of modifications such as aluminium air intakes and a new titanium exhaust system.

Performance details remain under wraps, but with the power boost - and a likely substantial weight drop courtesy of the lightened body - both are likely to improve on the standard Vantage's 3.9sec 0-62mph time and 205mph top speed.

In addition to the power hike, the Twins also sit 10mm closer to the ground than the standard Vantage, have a 20mm wider track and sport new 19in centre-locking forged wheels with Michelin Pilot Sport 4S tyres.

Inside, the premium Bridge of Weir leather upholstery can be specified in an "almost infinite range of colours, bespoke patterns and textures" and unique details, including a colour-coded horn button, are evidence, said R-Reforged, of its "forensic approach" to creating the cars.

Each car is said to take 12 of R-Reforged's workers 16 weeks to assemble in a process that starts with stripping down the base car, refreshing all worn components and rebuilding with the new body. A new optional 'visual carbon' paint finish adds 400 hours to the build time.

R-Reforged CEO Thomas Mayer told Autocar the Twins were designed to "encapsulate the perfect collection in one series".

"Owners get to enjoy the variety of choosing to drive the open-topped Speedster or the sporting Coupé, tailored in any way they like," he explained. "Two cars presents the opportunity to fulfil twice as many choices: if you can’t decide if you’d rather have a matt silver or gloss black car, you can have both."

The first set of Twins is destined for the private collection of Andrea Zagato, CEO of the eponymous design house, but will first go on display at Aston Martin's St Gallen, Switzerland dealership, before being used to fine-tune steering and suspension settings at Spain's IDIADA test facility in early 2021.