From £62,9407
Share review
It has a certain understated appeal as an unpretentious luxury SUV, but range-topping Black Edition trim does nothing to enhance it
Share
Open gallery
Close

This top-of-the-range version of the Volkswagen Touareg might just be the stealthiest full-sized SUV you can buy right now.

VW introduced the car’s Black Edition trim line earlier this year, which is intended as a ‘designer’ extension of the R-Line version of the car that was already available. It adds 21in alloy wheels (which can, of course, be had in black) and includes black trim (where there might otherwise be chrome, grey or body-coloured bits) for the roof rails, rear diffuser, door mirror caps, side window surrounds, door trims, front grille louvres, air intakes and headlight garnishes.

You can have black paintwork for the car as well, needless to say, and if you do - as our particular test car demonstrated - you’ll end up with a car that’s really very black indeed. It’s an irony not lost on this tester that VW used this car in a TV advertising campaign earlier this year whose focus was active safety; and then went and made it available in so stealthy an outward specification that it might actually be totally invisible after dark from certain angles.

Black Edition cars come with the same choice of engines as any other Touareg. There’s a 3.0-litre V6 TDI diesel in either 228bhp or 282bhp tune (our test car being the latter) as well as a 3.0-litre V6 turbocharged petrol with 335bhp. The plug-in hybrid-powered Touareg R will make that line-up’s number swell to four when it goes on sale in the UK next year.

Black Edition cars also get adaptively damped, height-adjustable, self-levelling air suspension as standard and all Touaregs come with centre-diff-based permanent four-wheel drive and an eight-speed automatic gearbox. VW also throws in LED matrix active headlights, a panoramic sunroof, four-zone climate control and ‘Vienna’ leather upholstery for no extra cost and a network of 360deg parking cameras with one of those plan view modes that makes it feel a bit like you’re having an out-of-body experience when reversing into a space outside Screwfix.

There’s still plenty of optional kit you can have, too, though; enough to pump up the price of our particular test car to more than £70,000 - which, believe it or not, still left one or two things off a fully loaded equipment tally. From massage seats to a 90-litre fuel tank, and four-wheel steering to active anti-roll bars, there are very few upgrades that any other luxury 4x4 might offer that you can’t have on this Touareg. You can just imagine the glint in the VW programme director’s eye when he told his team: “If you can get it on a Bentley Bentayga or a Porsche Cayenne, meine Kollegen, we’re having it as well. Because Fau Vee.”

Our test car had the Dynaudio stereo, head-up display, night vision cameras and four-wheel steering but not the active roll-cancellation system. 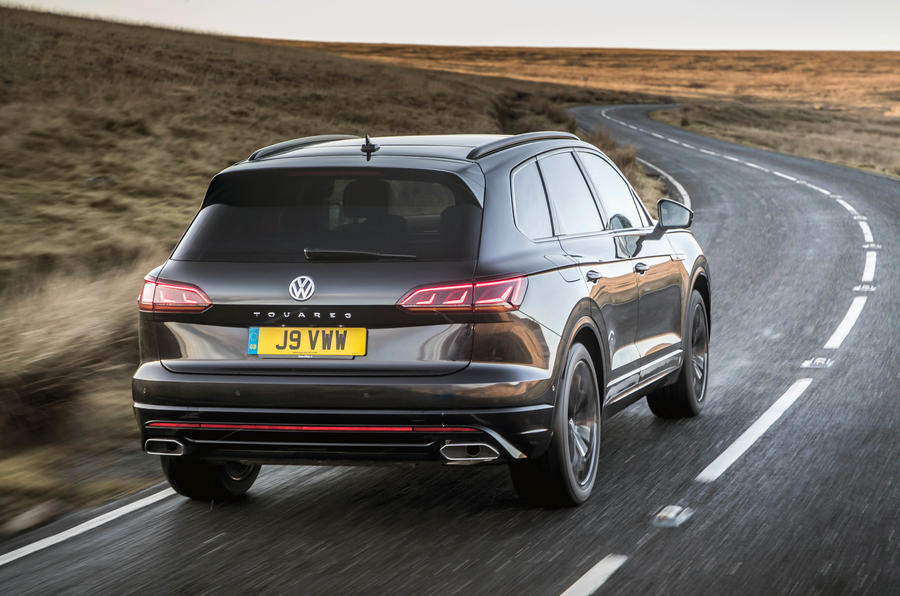 The Touareg would be a peculiarly functional and anonymous alternative to a Range Rover Sport or Audi Q7 - and that, after all, is clearly the territory for which this edition of the car is intended. For a select few, that might be precisely why you’d want one, although if you did, I’m not sure you’d be too bothered about paying extra for black roof bars or 21in wheels.

The interior’s very roomy for four and usable for three smaller passengers across the second row, but there’s no seven-seat cabin configuration. That air suspension can make getting in and out easy no matter your height, and once you’re inside, you’ll find that the car’s control layout is simple and that everything looks and feels inscrutably well secured and reasuringly solid. This is a generously provisioned cabin that's particularly well endowed for infotainment technology thanks to a 15.0in infotainment screen big enough for a good-sized laptop, and a premium stereo system so powerful that it hurt my ears at about 51% volume.

But it doesn’t feel as plush as some £70,000 SUVs. Coming from rivals, you might notice the fairly small, simple, unadorned steering wheel, which is very likely the same as the one that comes on a £25k Golf hatchback. That's VW for you. The front seats are superb: adjustable via the touchscreen for cushion length, lumbar support, and for the specific amount of lateral support you get around your thighs and abdomen separately. But they’re not lavishly decorated seats; the dashboard is a moulded one, not leather wrapped; the switchgear is mostly dark grey and it’s decidedly unflashy; and the digital instrumentation isn’t remotely showy, either, but instead is about as clear and readable as it could possibly be. God bless ’em.

VW’s 282bhp V6 TDI motor suits the Touareg very well indeed. It’s got all the torque the car needs and more, and right where it needs it, and the only moments of growliness it has are barely noticeable in the first couple of minutes after a cold start. It gives the car plenty of outside-lane motorway grunt and shoulders its mass very easily up from urban speeds. It also combines well with the Touareg’s eight-speed auto ’box 95% of the time.

There’s the occasional moment when the powertrain just feels a little bit sleepy and unresponsive. It’s slightly slow to restart at traffic lights and then the drivetrain seems to need to ‘wind up’ a little bit when given a bigger pedal input to deal with before it ushers this two-tonne SUV away from rest, as centre-diff-based permanent 4x4 systems sometimes do. The feel is just a little bit treacly and elastic at times, and when it presents itself, it's just enough to get on your nerves if you're hurrying.

Roll-on pedal responsive is much better - but drivability is better still if you ensure you’re using a drive mode that suits your style. Sport mode dials out some of that step-off lag, but Comfort is better at letting fine pedal inputs filter through to the contact patches for super-smooth cruising.

Whichever drive mode you choose, cruising refinement is very good. Wind intrusion is really well suppressed for such a tall car and mechanical isolation is excellent. Rolling refinement is good on well-sealed roads, but those 21in wheels can make for a noisier ride on coarser Tarmac and they can thump just a little over raised edges. As heavy as they must be, they also add the faintest detectable edge of fidgetiness to the car’s secondary ride, when the axles get excited over smaller vertical oscillations in the road.

VW’s optional four-wheel steering system does a lot for the Touareg’s manoeuvrability in tight car parks and around urban junctions, and it also makes it a doddle to thread around roundabouts. It’s a big car, this, but clearly needn’t handle like one. At higher speeds, the car feels soft, secure and easy-going in its default settings, but it will carry speed, resist roll and hold a tight cornering line easily if you want it to, when hunkered down a little on its springs in Sport mode. Would you drive it quickly for the fun of it? I dare say not, but the Touareg is very competent and capable should you need to. 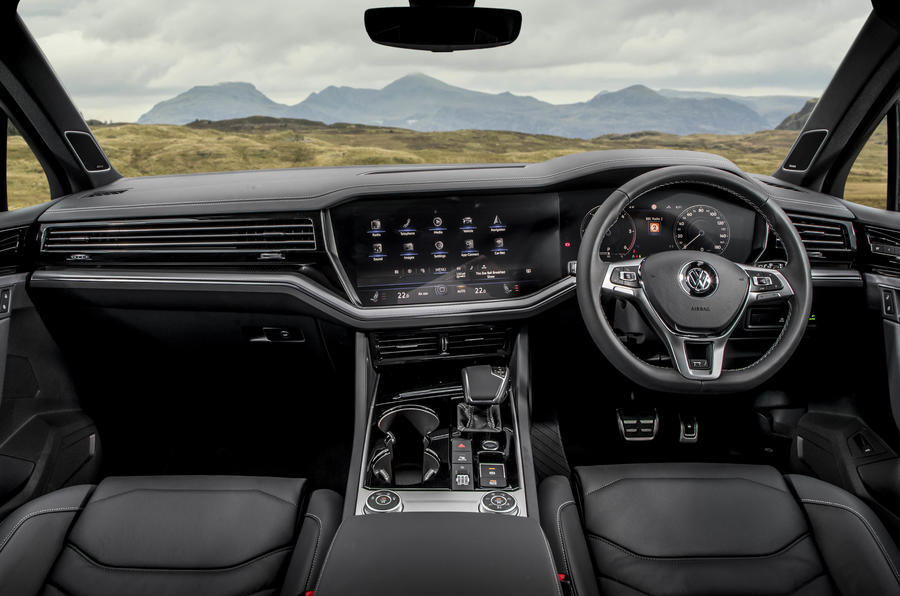 Would-be Touareg owners are best advised to set their sights somewhat lower than the Black Edition. With a set of smaller alloy wheels and body styling less clearly intended to appeal to Gotham City superheroes, you’ll simply have more to spend on the options that really enrich and enhance this car. Black roof rails aren't really among them.

We put 10,000 miles on a more sensibly configured example of this car only a year ago and loved how it presented so much of the refinement of a Range Rover with so much less luxury-car ego to carry as baggage. Needless to say, that appeal is only enhanced if you can secure a Touareg for something close to low-end Land Rover Discovery money, rather than for mid-spec Range Rover Sport cash. 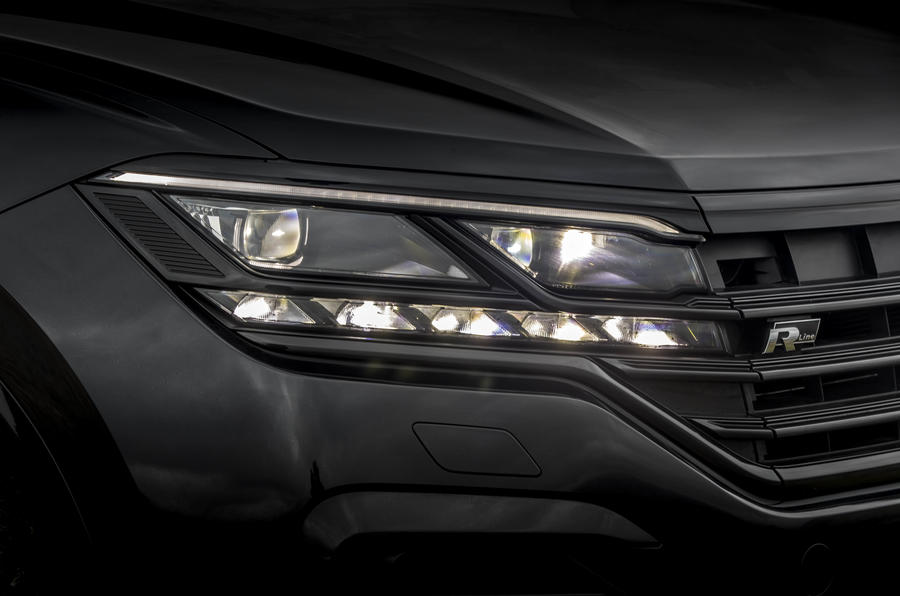 Unpretentious luxury SUV says Autocar. The very definition of an oxymoron says I.

289, I think Ford started the ball rolling with black editions of the focus mk1.