From £36,0408
Volkswagen adds entry-level SE trim to its flagship SUV. Is this new no-frills Touareg the version to go for?
Open gallery
Close

The Volkswagen Touareg has always been a pretty good car for people who don’t really like to stand out.

Next to the likes of the Audi Q7, BMW X5 and Mercedes-Benz GLE, its comparative lack of pretence has historically marked it out as the large SUV of choice for anyone who might not want others to notice - and then potentially sneer at - the fact they’ve just gone and spent quite a lot of money on a large SUV. A sort of low-key social climber’s Q-car.

The third-generation Touareg changes this slightly. With Volkswagen’s popularity reaching an all-time high in China (it's now the brand’s largest market), not only did Wolfsburg elect to stage the model's 2018 unveiling in Beijing, but it also designed it specifically with the Chinese market in mind.

Which makes sense, really; after all, if you want a car to do well, make it for the people who buy it in the greatest numbers. This helps to explain why the new Touareg looks the way it does, with enough chrome on its front end to attract even the most docile and disinterested of magpies.

But as bedazzling as it might now be, the Touareg still sits more towards the inconspicuous end of the upmarket SUV spectrum compared with the latest X5 and GLE. This is particularly true of this new entry-level SE model, which Volkswagen has just introduced to the UK with a £45,445 asking price. 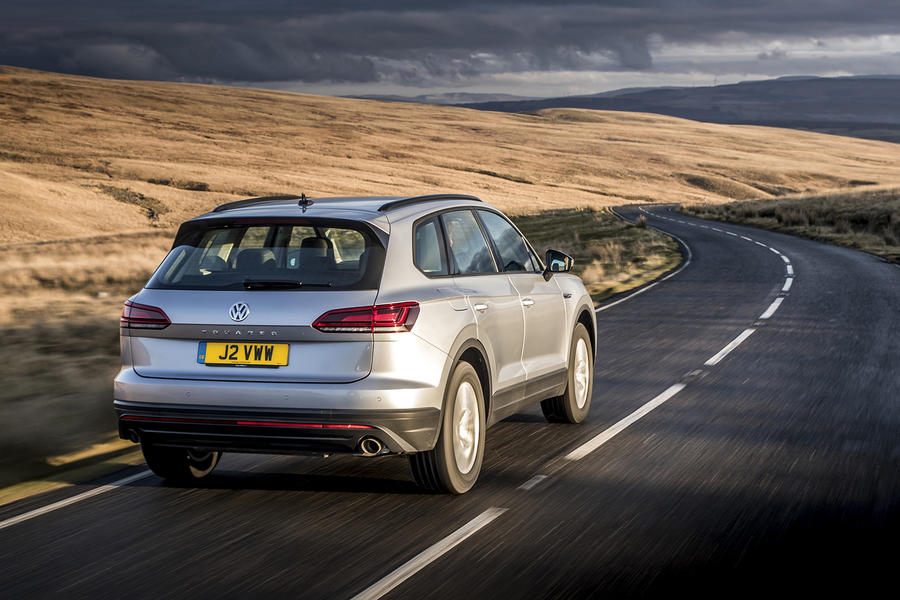 Essentially, this is about as no-frills as the Touareg gets. Black plastic cladding around the lower bumpers and side skirts means it isn’t quite as gaudy-looking as its pricier rangemates, although the lashings of chrome on the nose haven’t gone anywhere. Overall, it looks more tastefully understated than its flashier siblings, which seems more in keeping with its historically restrained image.

The interior, meanwhile, remains as spacious and functional as ever, with loads of front and rear passenger space and a capacious, family-friendly 810-litre boot. At the same time, however, the already modest amounts of technological and material wow factor that pervaded the interior of the high-end Touareg R-Line Tech we road-tested two years ago have been toned down even further.

Instead of leather upholstery, you have to make do with cloth, while the colour palette is decidedly more monochrome. The Innovision Cockpit has been done away with, too, so instead of a 15in infotainment touchscreen and 12in digital instrument display, you get a 9.2in touchscreen and analogue dials. Not that that’s necessarily a bad thing: the dials are impressively clear and easy to read, while the smaller display is easier to interact with while you're driving and certainly doesn’t want for any graphical sophistication.

Unlike our road test car, with its optional 21in wheels and two-chamber air suspension, the Touareg SE rides on 19in alloys as standard, while its front and rear double wishbones lie beneath passively damped steel coils. There’s no four-wheel steering or active anti-roll bars, for that matter. This is a far more honest, less complicated strain of Touareg.

It’s also a Touareg with a comparatively firmer ride – one that can be prone to a degree of side-to-side restlessness and fidgeting at low speed. This is most prevalent between 20 and 30mph, but the car begins to breathe far easier as soon as you move up to open road speeds. With smaller wheels and fatter sidewalls, you’re reasonably well isolated against bumps and ruts, too, although obviously not quite so far removed as you would be in an air-sprung Q7 or Volvo XC90. Not that that comes as much a surprise, given they're considerably pricier.

The Touareg SE is comfortable and largely refined on the motorway, with only the faintest fluttering sound permeating the cabin as the wind whips around the door mirrors. There’s a bit of road roar too, and you can detect and hear surface changes, but not to such an extent as to severely compromise the car's abilities as a long-distance cruiser.

It’s not totally against the idea of being hustled down a fast B-road, either, but it doesn’t egg you on to really push it. Its control weights are all very sensible, with its steering allowing you to accurately navigate corners while simultaneously conveying a sense of steadfast handling security and predictability. The car remains impressively flat through faster bends and grips well. In fact, it almost feels like a very big Golf - which is probably the point.

Its 228bhp V6 diesel engine seems potent enough in the real world, with modest amounts of mid-range shove on tap to get you up to speed in a brisk enough fashion to make us question why you’d want to opt for the 282bhp unit.

What could be better, however, is its thoroughly damp throttle response and the sluggish manner in which the eight-speed transmission reacts to inputs. Prod the accelerator and, after what feels like an age, it’ll suddenly drop one too many gears so that you unexpectedly surge forward. It’s an affliction that seems to be endemic to the Volkswagen Group post-Dieselgate, and it’s no less annoying here than it is in any other WLTP-fixed Audi, Seat or Skoda. 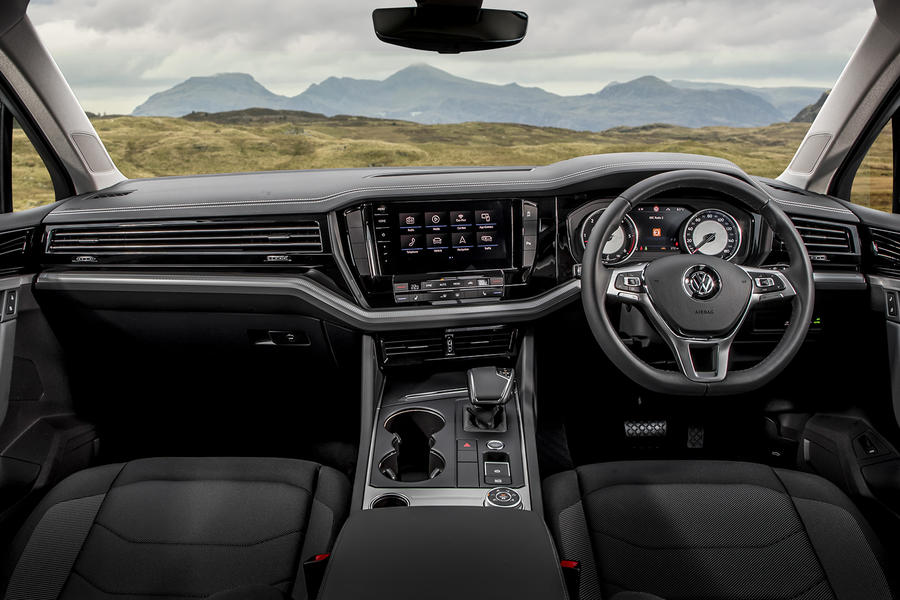 Nevertheless, the Touareg SE is still a lot of car for the money. At £45,445, it’s some £8000 cheaper than a basic XC90 and nearly £11,000 less than an entry level Audi Q7 - albeit one that comes with air suspension and an extra degree of pedigree as standard.

It’s also tricky not to respect the sense of subtle charm that defines the Touareg SE. Volkswagen reckons that only 10% of the Touaregs it sells in the UK will be in this basic spec, which seems like a bit of a shame, because it suits its understated character really rather well indeed. 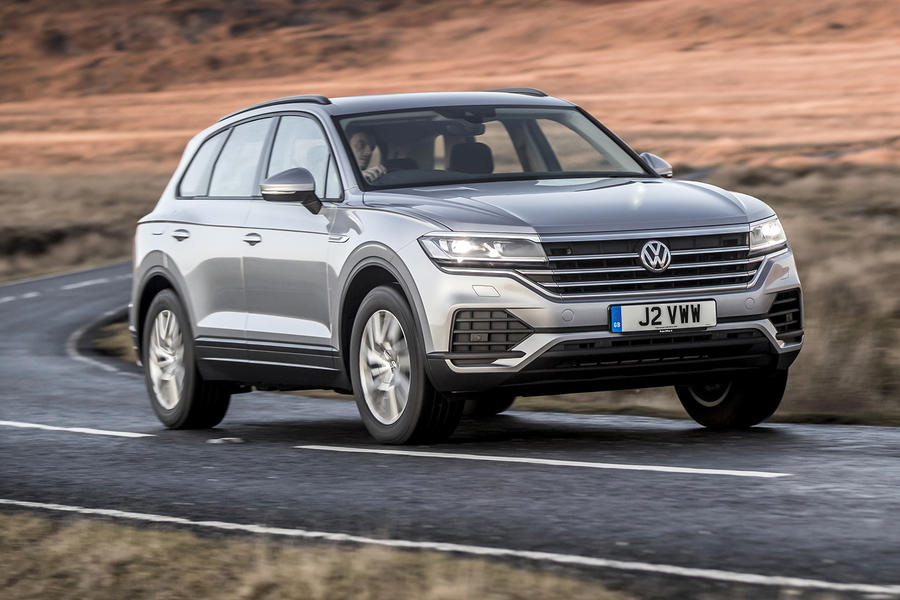 As usual your headline is misleading. There is no Touareg available for £36K so please improve the proof reading.

Does it allow you to park in

Does it allow you to park in disabled parking spaces? This is very important for Range Rover Sport owners, especially the one with his peroxide wife and kid, who took the only disabled space in my local Topps Tiles yesterday and gave abuse when challenged.
Will86 26 January 2020

Just wait for the pre-reg deals

I quite like the Touareg as an understated but classy SUV but don't ever think about paying £45k for a base model. A quick search online flags up a few delivery mileage pre-reg SEL models with the more powerful 282ps engine for £37-38k. Now thats a lot of car for the money.