Common platform strategy must work out rather well for the Volkswagen Group overall in terms of pounds, shillings and pence – but for the Volkswagen brand its effect looks less clear. If your potential customer knows enough to know that a VW Golf and a Seat Leon share a platform, after all, that knowledge is inevitably going to make the cheaper vehicle in the equation look like the smarter buy. And where VW’s hatchbacks, saloons and crossovers are comparable with their group counterparts, they rarely represent the cheaper half of the equation.

With the new Volkswagen Touareg, however, the boot’s on the other foot. If you’ve read Wikipedia’s page on the VW Group’s ‘MLB’ platform, you’ll know that the cars this third-generation luxury SUV is related to are mostly more expensive cars: some of them, a lot more. The Touareg’s active roll cancellation system uses the same technology you’ll find on a £140,000 Bentley Bentayga, and its four-wheel steering system is shared with a £165,000 Lamborghini Urus. And this in something likely to be priced from a whisker under £50,000 when it arrives in the UK later this year.

But if you bought a new Touareg on the basis that it’s some kind of bargain-hunter’s super SUV in his Daily Planet office clothes, my guess is that your smug face wouldn’t last very long. This car proves that modern platform-engineered sibling models can serve widely different tastes and purposes, even when the cars in question share a bodystyle as well as a primary component set. The Touareg was, and remains, a surprisingly functional and relatively simple sort – and that’s in spite of VW’s obvious attempts to give it more glitz. 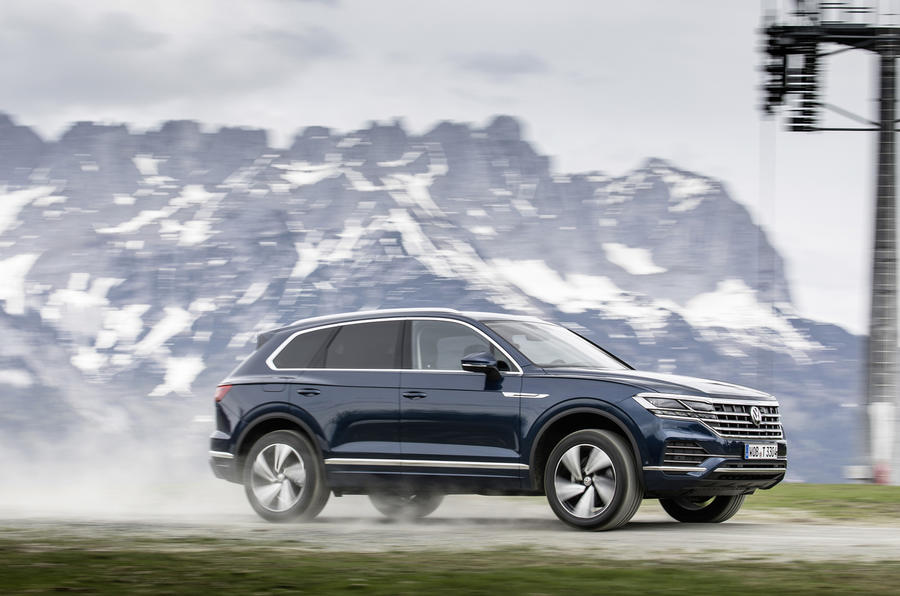 The new Touareg certainly handles better than its predecessor, but it’s a long way from having the agility and poise of a Porsche Cayenne; and while the interior has high-quality materials and high-tech ingredients, as a whole the Touareg is a country mile from having the richness or design appeal of either a Range Rover Velar or a Volvo XC90.

It will be available in the UK later this year with a choice of V6 diesel engines and a V6 turbo petrol, while both a V8 diesel and a petrol plug-in hybrid come later. We tested the more powerful of the two V6 oil-burners, which produces more power than the equivalent Audi Q7 at 282bhp, and also will likely supply six-cylinder smoothness and generous torque for a price that’ll only buy you a four-pot diesel from certain rival brands.

Our test car had two-chamber air suspension, active anti-roll bars and four-wheel steering too, mind you – all of which are likely to be optional fit at least at the bottom end of the Touareg range – but its centre diff-based four-wheel-drive system and eight-speed automatic gearbox will be standard.

The Touareg’s a five-seater with a boot that’ll swallow up to 810 litres of cargo before you start flopping over backrests. It has plenty of room even for larger adults in both rows, and up front the cabin looks and feels solid, classy and expensively hewn, though it retains a functional, slightly unadorned ambience. It’s luxurious without being lavish or ornate, as modern Volkswagens tend to be.

The wow factor comes from the Touareg's duo of large juxtaposed instrument and infotainment screens – the former 12in from corner to corner and the latter 15in – which butt up against each other similarly to Mercedes’ current orientation. You can configure the bigger of the two screens to your liking, to display navigation mapping, trip computer info or any number of other things, in almost any combination you want. The system’s called ‘Innovision Cockpit’, and though its complexity makes it less intuitively usable than some, it’s nonetheless very visually impressive.

On that familiar spot on the transmission tunnel you’ll find the rotary dials controlling the car’s adjustable-height air springs and its various driving modes – and, from ‘Eco’ and ‘Comfort’, through ‘Individual’, to ‘Snow’, ‘Sand’ and ‘Off-road Expert’, there are plenty of modes. Having sampled several of them, you’ll find that ‘Normal’ and ‘Comfort’ seem to suit the car best on the road, since they combine the Touareg’s first-rate refinement and isolation with a settled, quiet and comfortable ride; and handling that melds intuitive drivability with wieldiness and precision quite well.

In other modes, and particularly when that handling is examined with a bit of gusto, the Touareg proves quite agile in outright terms for a car of its size, but doesn’t make for a particularly enticing drive. Our test car’s various active suspension and variable ratio steering systems seemed to combine to take some of the predictability out of the car’s handling around tighter bends - that steering’s directness quickening quite suddenly at about a quarter turn of lock and with only artificial-feeling weight coming along with it. This made the Touareg’s chassis feel grippy but uncommunicative on mountain roads, and at its best moving at more relaxed pace.

In a pattern of use more typical of a big SUV, however, the car works very agreeably, a shortage of centre feel on that steering and an inconsistency in its weight and provision of feedback being only minor dynamic bugbears. The car’s engine is more than strong enough to haul it along smartly and with performance in reserve, and it’s quiet and smooth with it – only very occasionally being tripped up by a slightly hesitant transmission. 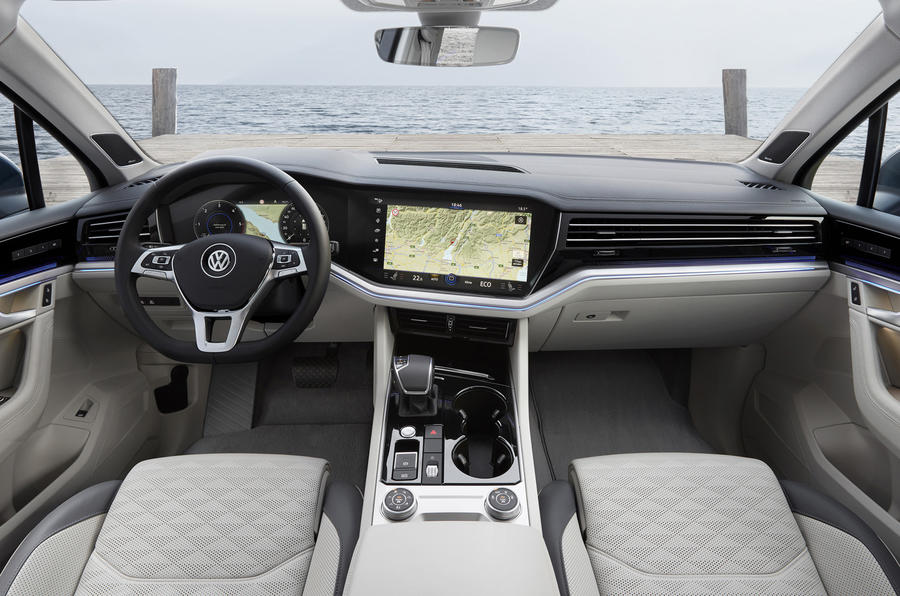 This is, by and large, then, the same understated, competent Touareg known and loved for its fuss-free sense of maturity, refinement and ease of use since it first appeared in the UK in 2003.

I suspect it's also a car whose chief lures may well have been just the same if VW hadn’t bothered with that oversized chrome grille, that gigantic infotainment system, or at least half of that active chassis technology; but since it’s also VW’s model flagship, it was always likely to be a means to a certain amount of superfluous technological showing off.

The VW Touareg isn't likely to be anyone’s 'must-have' of 2018, but it is a very nice car deserving of more attention than it'll probably get – and it's an even nicer one for its unpretentiousness among the ever-increasing luxury SUV ranks. 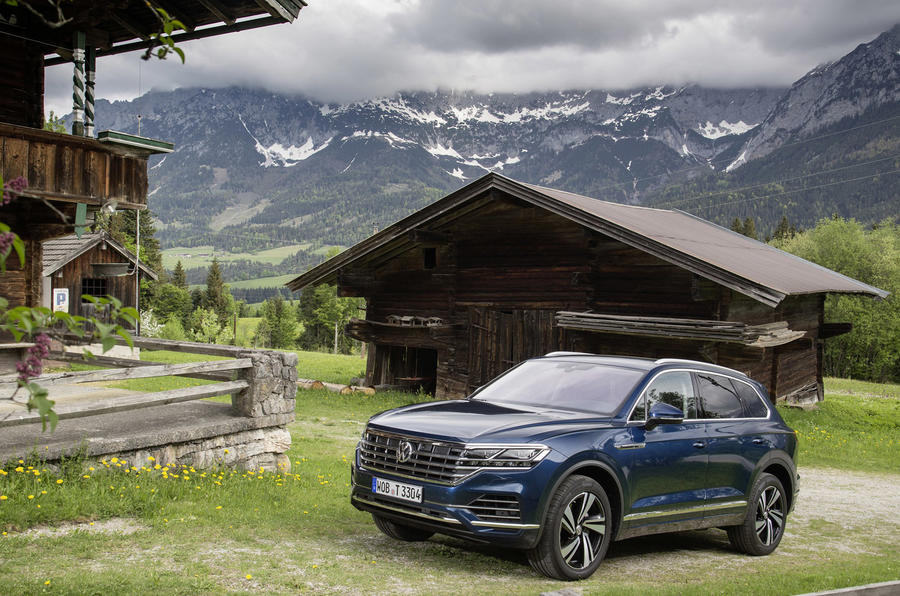 A big heavy vehicle with no redeeming features, it's just a big heavy lump for £52,000. I really like the "alpine setting" picture

...I find this by far the most easy on the eye of it's kissing cousins from Audi, Bentley, and Porsche.

It all looks very up market

Until you happen to look down and see the VW badge in the centre of the steering wheel. Not good.