7
Rabidly quick, spacious and easy to drive, but there are finer fast SUVs at this price
Open gallery
Close

The Volkswagen Tiguan R is what happens when Volkswagen applies Mk8 VW Golf R fundamentals to its big-selling medium-sized SUV.

The 316bhp 2.0-litre motor, seven-speed DSG gearbox, go-faster interior and, yes, the same effective R-Performance Torque Vectoring driveline: all transferred to something roughly 200kg heavier and whose centre-of-gravity is quite a bit higher than the machine it was originally intended for.

You can even have a titanium Akrapovic exhaust, to go with the standard-fit 21in wheels, just to remove any doubt that this particular Tiguan is quite a different proposition to its pragmatic rangemates, and a fully fledged R product. But even if you don't have any extras, it's fair to say this car is still the most ambitious Volkswagen SUV since the R50 Volkswagen Touareg of 2008 – the extra-butch one with the 5.0-litre V10 twin-turbo diesel.

As for price, the Tiguan R costs around £46,000, and so in like-for-like specification, is £6000 or so more for it than its Golf R cousin. Yes, the R is quite expensive relative to the broader Tiguan range, which starts at less than £25,000. However, £46,000 is still less than you would pay for the entry-level, 242bhp Porsche Macan, which might well be the benchmark in this particular niche but is comfortably outperformed by the Volkswagen on paper, and isn't so generously equipped as standard.

That the Tiguan R can, with the help of a launch-control programme, fire itself to 62mph in less than five seconds also makes it quicker than the new Mercedes-AMG GLB 35 – probably its closest rival in character and concept, along with the BMW X2 M35i. The outlier in this clique is Audi’s RS Q3, which with five cylinders and 396bhp is considerably more exotic than the VW, but also costs more than £53,000 even in basic form. 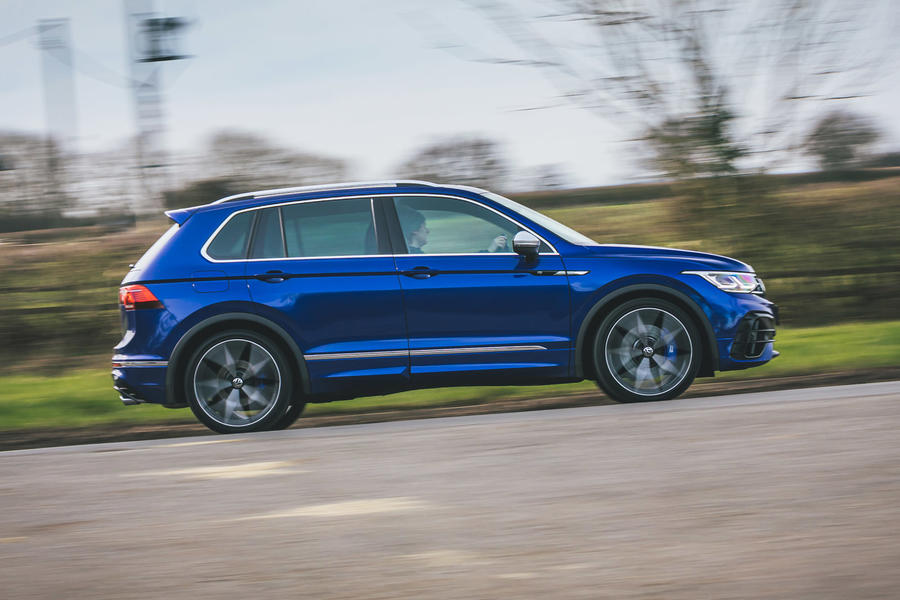 Apart from the weight-gain, the other key – and obvious – difference between this car and the Golf R is the fact that, on its extended MQB platform, the Tiguan R really does feel much more commodious inside. But even among its crossover peers, the Tiguan has always been spacious, and our test car's optional panoramic roof only adds to the cabin's breezy atmos. It feels a large car even at a standstill.

However, despite the new digital displays, it also feels a little dated inside, going as the Tiguan does off an older version of Volkswagen’s interior-design manual. And while the cabin has plenty of sporting R touches, there’s no escaping the thoroughly unsporting architecture, either. Despite their SUV status, several rivals still manage to cosset their occupants, while the Tiguan is laid out for practicality above all else and there's nothing the R treament can do about that. The driving position is therefore conspicuously upright, being commanding but not very engaging, and where the GLB 35 or Macan owner will find themselves feeling hunkered-down behind the dashboard to some extent, that's not the case in the Volkswagen.

There’s also the strange juxtaposition of having both an ‘R’ button on the steering wheel, to ramp up the driving modes into something very aggressive indeed, and also the Active Control dial on the transmission tunnel, to set the driveline up for going off-road. The mixture sounds quite fun, I’ll admit, and you'll find a similar combination inside both the Porsche Cayenne and Lamborghini Urus. Still, similar to the combination of tall driving position and Alcantara-clad semi-bucket seats, this is just another reminder that the performance SUV sector has never been anything if not contradictory. See also the Tiguan R's aggressively open-worked front bumper, through which you can see a trio of meaty radiators, set against the car's overwhelmingly family-minded, two-box proportions. It's all a little unnatural, though that isn't unique to this Tiguan.

And, of course, you might like all that, as plenty of people do. In which case you'll be glad to hear that, on the road, the Tiguan R has then several notable virtues that quickly become apparent, as well as some limitations.

Unlike the Golf R, the adaptive DCC dampers are standard-fit, and ride-quality is one of those virtues, despite the R's 10mm drop in ride height compared to the regular Tiguan. The chassis is simply less prone to crashing over rougher surfaces than that of its lower-riding Golf R cousin, yet it sacrifices almost nothing in the way of control until you begin to properly up the ante. The hottest Tiguan is quite distinctive in this way, because despite its added suppleness, its everyday manner still comes over as more serious and uncompromising than those of its many rivals, who sometimes allow you to forget you're driving a full-on performance derivative. The Volkswagen doesn't do that, instead translating the behaviour and taut feel of a hot-hatch to something larger in every direction – just with a little extra give.

And like the Golf R, the Tiguan R is damnably fast – more so, it can often seem, than the Golf, though this is due to the faint feeling of precariousness imparted by the higher driving position, rather than real pace, and so is not always that enjoyable. In Sport and Race mode, alongside impressively little turbo turbo-lag for a stressed 2.0-litre four-pot motor, the synthesised exhaust note adds some additional drama, and altogether with the car's acceleration, things can feel frantic. If you want your family crossover to leave passengers slack-jawed, this one will do it, and the new brake package is every bit the engine's equal, with very nicely judged pedal-weight.

The Tiguan R is also decently precise and composed when driven down a challenging B-road. It's easy to place, and packs the added surprise of behaving in the same faintly rear-propelled fashion as the Golf R when it comes roaring out of the tighter bends. However, most of the time, the effects of the R Performance torque-vectoring system manifest less with a sense of rear-driven poise than one of four-wheel-drive neutrality, until you really press on, when the slack in the long suspension begins to an invite understeer balance. And that's the part of the problem with the Tiguan R. It's phenomenally, almost soullessly capable most of the time, but then when you really want to go at a road, it can't really raise its game in the same way as the Golf R can. 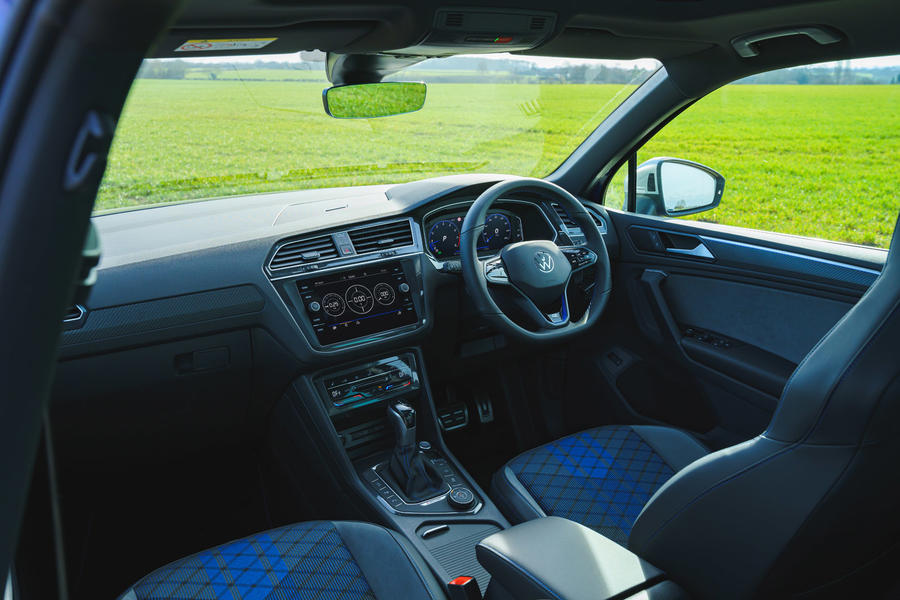 That said, it certainly isn’t one-dimensional, this 316bhp Tiguan, and probably offers the SUV driver in a hurry more to play with in dynamic terms than Volkswagen’s existing R-badged crossover – the Volkswagen T-Roc R.

No serious driver would take the Tiguan R over the Golf R, however. The driving position in the former feels agricultural by comparison, and the steering in the larger car also lacks the communication of the Golf’s helm. These are not superficially effervescent cars we’re talking about; they require some level of commitment to come alive, and the Golf R is more confidence-inspiring in getting to that point, and considerably more rewarding once you get there. If you need the space, wait for the Golf R Estate.

Or, perhaps, consider the Macan, though be prepared to pay more than £50,000 after options. Of all the performance SUVs of this kind of size and price, it’s one of only two (the other being the Alfa Romeo Stelvio) whose driveline is naturally biased towards the rear, and you can feel that in both the steering and the handling. Residuals are rock-solid, too, which ought to justify the additional initial outlay. 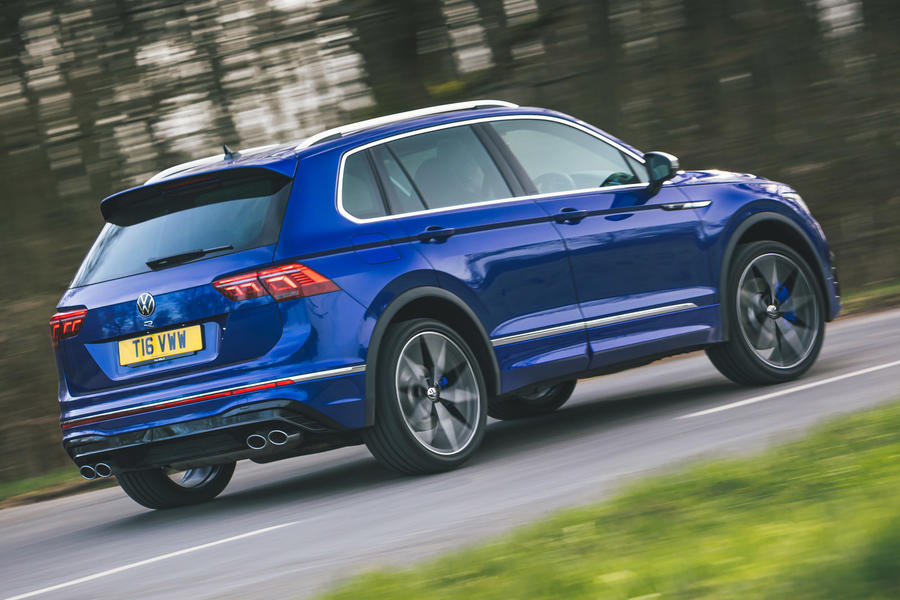 Dear Autocar, facts are important. Tiguan is VW's small/compact crossover SUV while Toureg fills the medium size category. Back in 2019 the company unveiled a large SUV concept, the 5.1m-long SMV, but this was destined for China only.

I repeat, Tiguan is a small crossover SUV.

What point are you trying to make here? What 'facts' are addressed?

Very strange there's no reference to the very similar but much cheaper Cupra Ateca.  I bought one last year with the £500 extra power increase to 350bhp.  The car flies and feels as quick as my 996 Turbo.

si73 16 March 2021
Great colour, bland and naf car, the golf estate is a better VW buy than the Tiguan irrespective of R badges in my opinion, but then I'm no SUV fan.
View all comments (6)