These days, no self-respecting manufacturer passes up the opportunity to flog us an anniversary special, no matter how tenuous that anniversary might be.

Forty-five years is an odd one, it has to be said, although Volkswagen has celebrated the Golf GTI’s birthday in reliable five-year increments since the Edition 30 of 2007 and some of those specials have been excellent, so we welcome another attempt.

There is something that needs addressing early, though. At £39,980, this new car – called the Clubsport 45 – is not only the most expensive Golf GTI ever made, but it’s also more expensive than the current and not exactly cheap Golf R.

That’s the Golf R that makes 20bhp more from the 2.0-litre EA888 Evo4 turbo petrol engine the two cars share, and that drives not only its front axle but also the rear, which is now equipped with clutch packs that really do up the 316bhp flagship model’s dynamic game. So even with VW's own ranks, £40,000 is an asking price that ensures plenty of people will view the idea of Clubsport 45 ownership as a non-starter.

The extras you get for your money amount to an Akrapovic titanium exhaust, 19in ‘Scottsdale’ wheels, sporadic ‘45’ branding, plus metallic black finishing for door mirrors and the hefty rear spoiler. Slim pickings, you might think, if the donor was the regular GTI.

However, as the name suggests, the new car is based on the GTI Clubsport, which is a more seriously developed proposition, and one we like. In Clubsport guise, not only does the GTI get 296bhp instead of 242bhp, but new suspension springs also sit the car lower, front camber is increased not just by geometry tweaks but also with new parts, and the rear axle is tuned to be more mobile.

Factor in a more aggressive e-diff up front and Golf R brakes and the Clubsport recipe is an alluring one. Alas, there’s no manual option, but the current seven-speed dual-clutch automatic is awesomely effective, whether you're pootling or calling for redline upshifts.

Other than the exhaust, the 45 is no different in mechanical terms from the normal Clubsport, although it has had its speed-limiter removed, which pushes its V-max to 166mph, up from 155mph. The 45 also doesn't come as standard with VW's DCC adaptive dampers (fitted to this test car), or a rear-view camera, or even the top-ranking Discover Navigation Pro infotainment system. Those three options alone punt the asking price to more than £42,500. 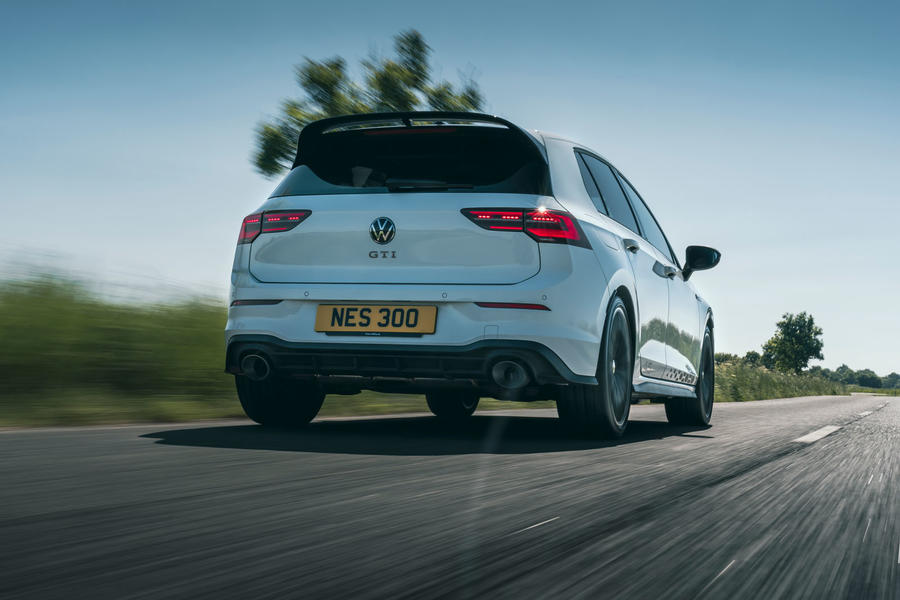 Given the 45 is mechanically identical to the regular Clubsport (assuming that Clubsport is shod with the optional 19in wheels), we'll keep this bit brief.

The driving position is good – great, even, although not exquisite, like that of the Honda Civic Type R. It's just a little too upright for that, and while we're picking holes, the seats themselves are too squidgy for something of this performance level. Still, in terms of everyday use, very few do it better.

On the move, the first thing you'll appreciate is the steering response. It's measured but nicely alert, as though the car is telling you that, if you want, it can be extremely agile, but it isn't going to hammer that fact home by feeling in any way nervous when you just want to get from A to B. The extra weight (and, equally, the more apparent changes in weighting during cornering) in the action imparted by the Clubsport-spec front suspension also makes the car rewarding even at a canter, and more confidence-inspiring than the regular GTI.

Greater sense of occasion in the driving environment wouldn't have gone amiss, though, especially for an anniversary special. Where are the much-improved, full-size paddles from the Golf R? And while an Alcantara-trimmed steering wheel isn't mandatory for hardcore limited editions, it might have been nice to find one in the 45.

As for ride quality, with the DCC dampers fitted, you're given 15 options for the damping force, but anything beyond the midway point between Comfort and Sport isn't suitable for less than perfect British B-roads. On poorer surfaces, the suspension is easily agitated, even in Comfort, and to the extent that it elicits rattles from the interior. The regular Mk8 GTI is already set up on the stiff side, sacrficing some suppleness for aggression, and the Clubsport's shorter springs clearly narrow the sweet spot of this chassis further. Best find a better road.

Do so and there's plenty to like. The Clubsport 45 doesn't charm with an elegant sense of flow and it's not especially adjustable unless you're feeling very, very committed. (In truth, in this sense, the Golf R is more engaging on the road.) However, there's a lovely precision to its body control, which feeds into a sense of accuracy and dependability. A hint of torque steer now and then keeps things exciting, but mostly the battle between engine output and contact patch is very niced matched, and the car will happily take full throttle in the lower gears. Which, to dispel any doubts you may have, is pretty damn exciting with 296bhp on tap.

As for the Akrapovic exhaust, it adds some drama, but not to the extent that VW felt it could fully abandon its engine-note synthesisation programme. As the marquee option on the Clubsport 45, it's no must-have. 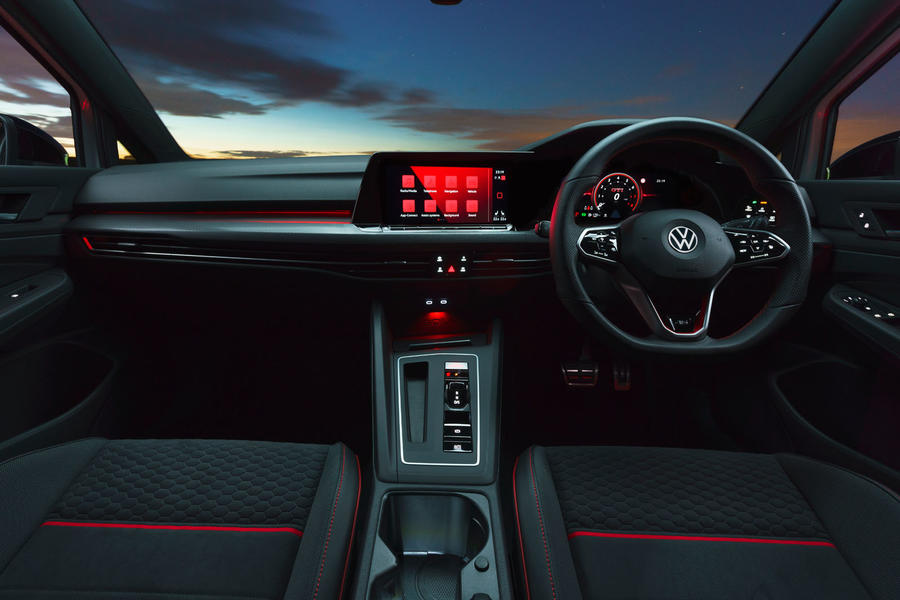 The 45 is a fine hot hatch: catch-your-breath quick, reasonably communicative by modern standards, sharper than the base GTI, and more composed on technical roads than much of the opposition, including the Ford Focus ST.

However, you get all that with the regular, £2750-cheaper Clubsport, driving which you’ll not especially miss the rasp of the 45’s fancy exhaust, or the brittleness its larger wheels impart on shoddy roads. This time around, we'd pass up the limited-edition special in favour of the car it's based on. 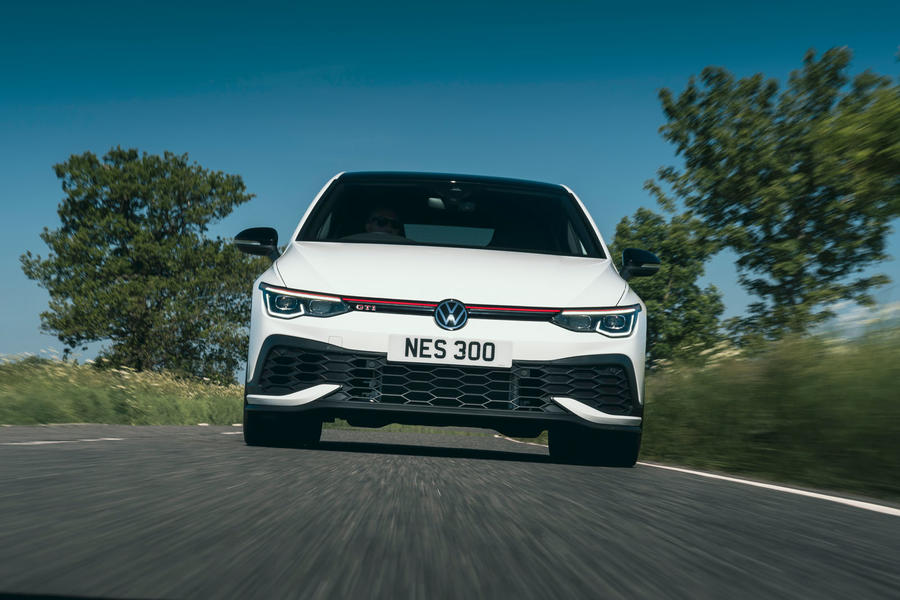 Rattles from the interior? In a Golf?. Surely not....

Instead of keeping the the Gti as VW pinup, wall poster Car, how about doing the Scirroco again?, what would it's key's assets need to be?