The e-Up is the top-of-the-range, all-electric version of the Volkswagen Up. It has just been updated for the 2020 model year and we’ve tried one on UK roads and in right-hand-drive form.

The headlines here are a range boost and a price cut. A new kind of drive battery, made up of pouch cells instead of box-section prismatic ones, has increased usable battery capacity significantly and has effectively doubled the car’s claimed range, which is now 159 miles.

At the same time, almost £2000 has been cut from the car’s price, allowing it to fall to within a whisker of £20,000. Which is still plenty for a city car, of course, but it’s significantly less than Renault charges for the cheapest Zoe. 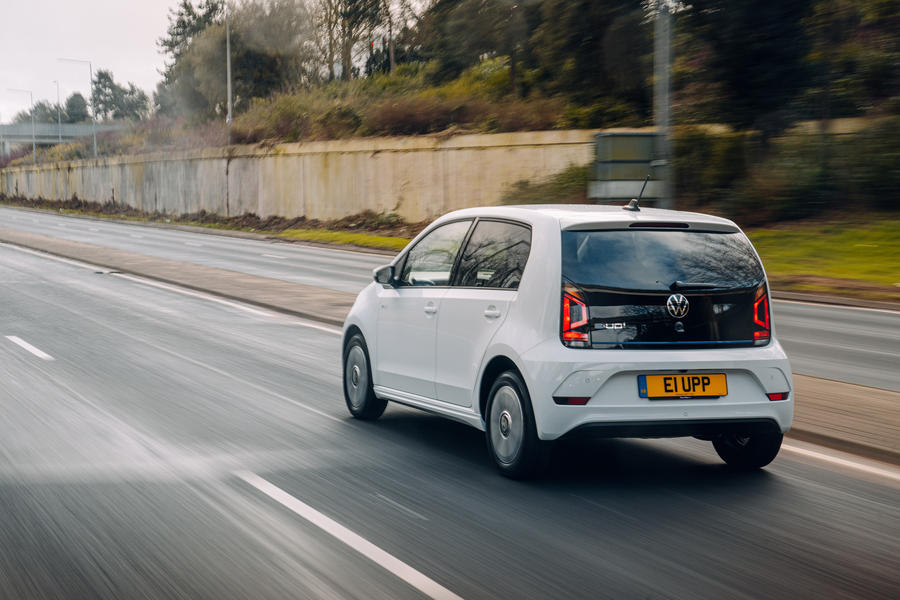 The new battery has added 15kg to the e-Up’s kerb weight but the car’s mechanical package is otherwise unchanged, as are its other performance stats. Even weighing 200-and-something kilograms more than any of its range-mates, it’s a pleasingly nippy drive and its handling isn’t as penalised by that kerb weight as other small EVs seem to be.

On the inside, the car differs from other Ups with its special analogue instrument pack. There’s a big central speedo flanked by simple, readable dials that tell you how much battery charge is remaining and how hard you’re working the motor. All it really lacks is an equally clear estimate of remaining range, although you can conjure one of those up onto the digital trip computer screen.

The car benefits from Volkswagen’s updates to the wider Up range, so it now has a pretty basic camera-based lane-keeping assist system and curtain airbags as well as front and side ones. As city car interiors go, it’s certainly smart and pleasant and reasonably spacious up front; perhaps a bit less spacious, compared with the most practical city cars, in the back. This tester would have rather the car had conventional front seats with adjustable head restraints than seat squabs with ‘integrated’, non-adjustable head restraints.

The car offers you five primary drive settings, as well as three broader drive modes - and while it could make it easier to ramp up and down battery regeneration settings through the fitment of steering wheel paddles, there would at least probably be less to be gained in terms of energy efficiency than for drivability if it did.

Engaging ‘D’ on the transmission puts you in the default driving setting, and from there you can adjust battery regen settings (D1, D2, D3) by flicking the shift lever left and right. Pull it backwards and you engage ‘B’ mode, in which you get maximum regen when you lift off the accelerator pedal, allowing you, for the most part, to drive the car in ‘one-pedal’ style.

It’s as well to remember, of course, that once you’re at cruising speed, allowing any car to coast on its accumulated kinetic energy is always the most efficient option, and that slowing down and speeding up for the sake of it can never be as energy-savvy. Having said that, when you really need to slow the car down, the e-Up’s regenerative braking options allow you a choice of how you’d like to do it, and they leave it with one of the less woolly and imperfect-feeling brake pedals if you do choose to ramp up the motor braking.

Accelerator pedal response is predictably good and particularly linear, meanwhile, and outright performance is smirk-inducingly swift from town speeds, remaining moderately perky even at B-road pace. The e-Up is something of a nipping specialist. It’s small enough and brisk enough to seize opportunities in traffic that other cars couldn’t, you can see plenty out of it and judge its size easily, and it feels suited to the urban environment in a similar way to the BMW i3.

At higher speeds, the car’s weight occasionally makes its presence felt, but much more so over long-wave bumps than when cornering. Although its lateral grip levels aren’t particularly special, the e-Up’s lateral body control is quite good and it feels nicely agile around tighter bends. The car’s body isn’t brilliantly isolated from wind noise at motorway speeds, but if you keep it off high-speed dual carriageways, as many owners surely will, it does at least ride reasonably quietly and with decent bump compliance.

Real-world energy efficiency and range will depend on where and how you drive the e-Up. On a route of mixed A-road and motorways at normal speeds, it’ll get 110 miles out of a full charge, or might do 5% better throughout the warmer summer months. Keep your speed below 50mph and stick in and around the urban sprawl and you might see more like 130 miles, depending on how efficiently you’re minded to drive. This is a car that you may set out to drive like a saint, after all, but its zippy, impish charms might easily seduce you. 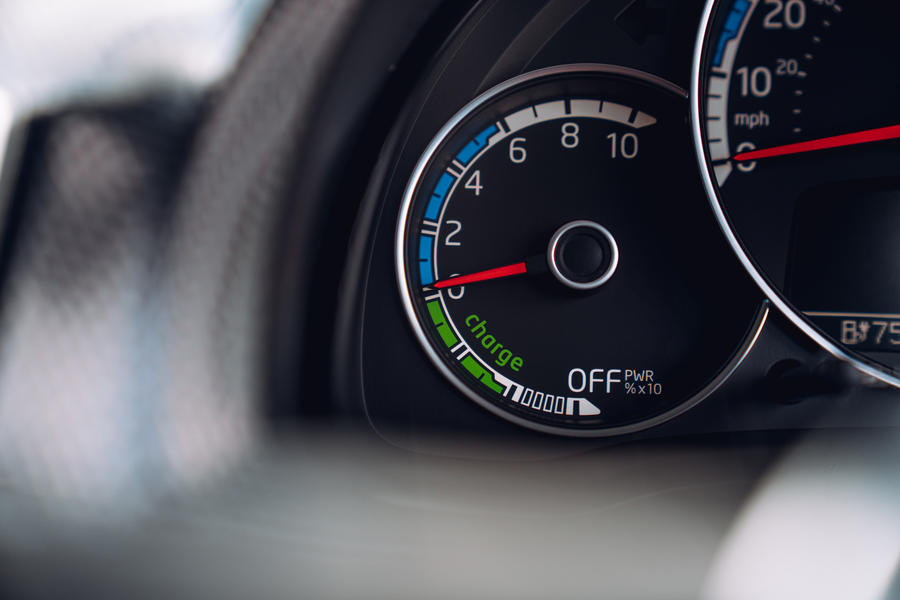 The gaggle of all-new electric cars hitting the market in 2020 might have attracted plenty of attention, but the fact that most of them are £30,000 cars stands to disappoint those who simply hope to replace a petrol-powered supermini with an electric one and pay a like-for-like price.

Sadly, even though the EV market is changing fast, that kind of swap is not possible yet; and this Up won’t be the answer to their prayers because, since it’s a city car with a usable 110- to 130-mile range, it simply won’t be usable enough.

But if you’re looking for a specialist urban hopper as your second car, and therefore range and space are less of an issue, you should certainly consider it. It’s more usable than some small EVs and cheaper than others, and a surprisingly breezy and enjoyable car to drive to boot. 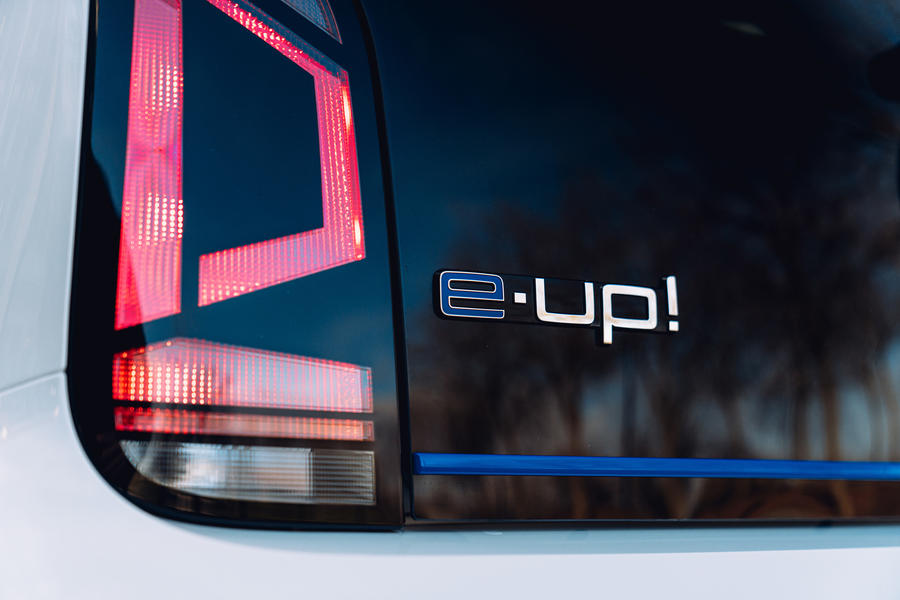 What's the payback time? How

What's the payback time? How many miles would you have to drive to break even compared to the petrol version? How many years at say 12k miles per annum?
catnip 7 April 2020

Why don't they offer the

Why don't they offer the option of a 3-door version? They've already engineered one, and its still offered in petrol versions. Despite what manufacturers and motoring journalists say, there are still many people, like me, who want or need a small 3-door vehicle.

A bland, boring, characterless, sh*te car from an evil, arrogant company, I d walk than drive anything from VW Group.